Sportsball Party is a game idea I came up with after a marathon session of Mario Party. The minigames will feature sports balls that are sometimes balls and sometimes armed and legged Pac-man looking balls.

Hi everyone, since I'm waiting on other people before I can finish my game show game, I decided to make a mini-game collection like Mario Party. It came about after a marathon session of Mario Party 7 at a friends house when I created a mini game with her 9 year old son to teach him a bit about coding.

I hope to put it in early access when I finish 10-15 games and get a Points Race mode (similar to Mario Party's decathlon mode) in place. I figure at that point it

There are five games done so far. 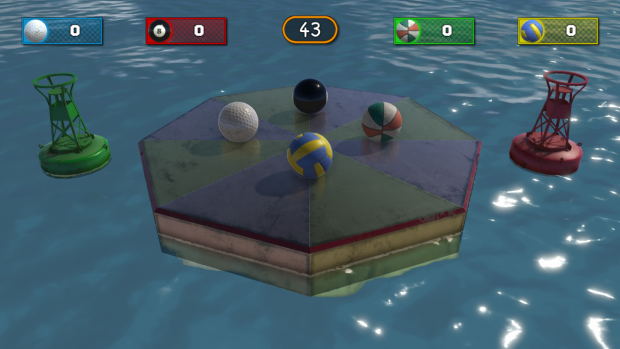 Bumper Balls is a sumo style game where you gain points for knocking the other opponents off of the platform. Points are deducted if you commit suicide by rolling off of the platform yourself. This is the game I made with my friend's son. It was originally going to be teddy bears in hamster wheels but we couldn't find a suitable teddy bear model and before I got home to make one, the step-dad recommended a variety of sports balls instead. Since there needs to be over 50 mini games, reducing the workload of animating characters made that sound like a good idea. There will still be some levels when you are in vehicles or other props, just like Mario Party. I may also give the balls arms and legs, Pac-man style, for the board game portion so that the player avatars can have a bit of character to them. 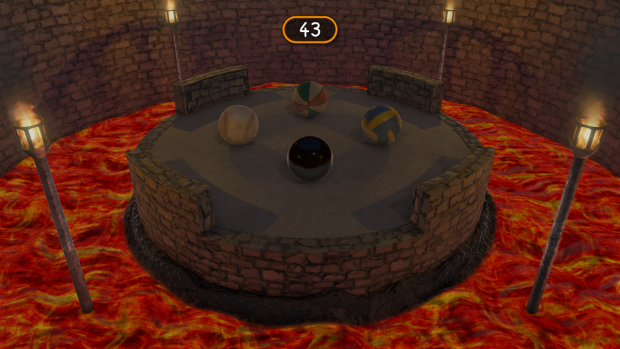 Bumper Knockout is just me lazily using the exact same code, pretty much. In this one the goal is to be the last ball standing, rather than to get the most points. 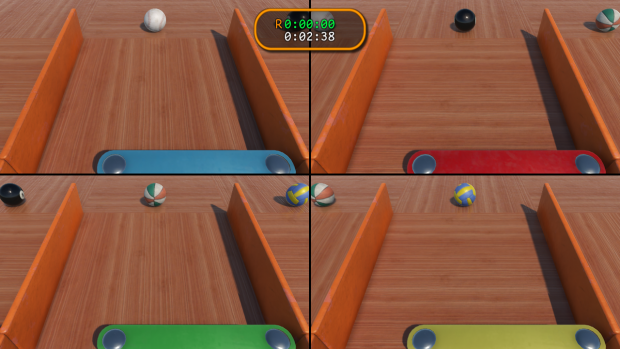 Pinball Slalom is similar to a ski slalom except you are avoiding pinball obstacles. The first wave is just the blocks that you see in the screenshot. After that come a series of bumpers that will knock you around a bit if you hit them, and finally at the bottom of the run is a set of flippers that will knock you back upwards if you don't avoid them. 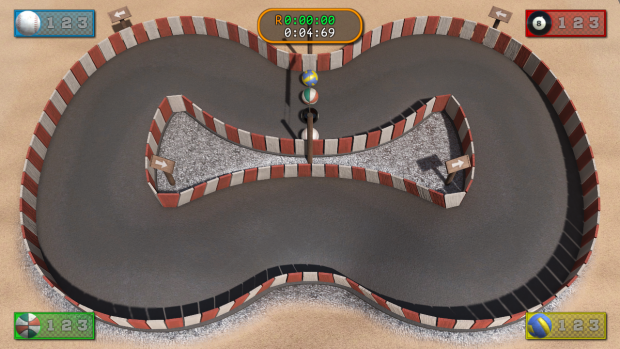 Roller Derby is just a traditional race around the track game. The first to complete three laps wins. The goal is to touch that giant ball-that-people-knock-around-at-concerts ball. When you do it will turn the color of your player's score box. The person who keep the ball colored their color the longest wins.

There are many more choices than the few balls represented in the screenshot. With the exception of the baseball, all of the balls have different color options. (Baseballs are boring, they pretty much only come in one color. Maybe I'll make a yellow softball.) At a later date I expect to add (rounded) American footballs, a tennis ball (tennis balls are boring too) and some wooden croquet balls.

The plan is to finish the 15 or so 4 player games before moving on to create the board game portion. After one board is done I'll create the 2 vs 2 games, then another board, then the 1 vs 3 games, etc.