Anne's update is live! Here are some future updates.

Anne can now be recruited as a playable character. Like everyone else, she has her own talents and outfits to collect. To recruit her, complete the Terna Island Assault sidequest and collect all eight Mana Cores. 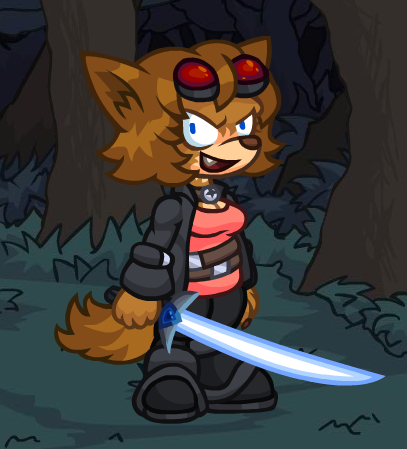 Anne is a versatile character. Along with her laser sword for melee combat, Anne can also throw bombs when she focuses. Unlike Lydia's Mana Bombs, Anne's bombs have an explosion radius and will bounce on the ground. Although she is quick on her feet, Anne has a hard time reaching the same vertical heights other characters like Lisa and Abby do.

Here are some of Anne's alternate outfits:

And here's a quick video showing her talents and abilities:

This update also brings a few bug fixes, which are below:

Anne's Update and all future updates are only available in the Steam version of Zeran's Folly, not the Free Version.

Anne wasn't the only new content planned for Zeran's Folly. Here is a list of planned future updates and their descriptions:

You may remember Marco as the minty-cool Chocolate-American at a table in the Hideout with Megavitamin. Although he has the put-upon mannerisms of a gangster, Marco is really the son of a wealthy businessman. In other words, Marco pushes paper during the week at his corporate office gig in Neo-Future City then larps as a gangster on the weekends. Marco uses his SMG to attack, which shoots straight-shot energy bullets. He shoots straight ahead depending on his angle, but he can also shoot in any of the 8 cardinal directions by holding the Aim button. Marco also has a jetpack which he can use to reach great heights or slow his descent.

Zeran's Folly is the first game Marco has appeared in but he was originally conceived as a character for Spaz Jetter X, the cancelled sequel to Spaz Jetter back in 2011. Solar City, the dungeon for Marco and Anne, was a stage in Spaz Jetter but Spaz, the main character, only explored the outside of the facility.

Solar City is a floating research station that has been ravaged by an internal robot rebellion. Marco wants to explore the station and loot any valuables he can find. The robots have disabled the teleporter granting access to the station, so Marco asks Anne to get him there with her cruiser.

Solar City is accessible after completing Pukamake Grotto. After you return from Mokumo'o, Marco will now be in the dock room near Anne instead of the common area. If you talk to Marco (not Anne), he will talk to her about it and you can choose to go or not. You can return after leaving but Marco won't join the party formally until the dungeon is complete.

Only Marco can explore Solar City. However, Anne will be playable too if she has been recruited. Otherwise, she'll wait at her cruiser while Marco explores.

Solar City itself has three main wings: the Techlab, the Medlab, and the Chemlab. Each section has its own challenges and area boss. All of Marco's talents are acquired as part of the progression through the dungeon. To complete the dungeon, Marco will have to clear all three wings and resolve the source of the robot rebellion.

Unlike other dungeons in the game, Solar City has a heavier focus on exploration and backtracking. The three wings are interconnected and new paths open as progression is made and Marco's talents are learned.

The Underneath is a sprawling network of tunnels and caves underneath the Tomb of Kings. Many dark and dangerous enemies dwell here, along with some magnificent treasures and a hidden town.

The Mega Well is found in the Underneath. It is the means of upgrading some rings into Mega Rings. Some rings have special requirements to obtain their Mega form while others simply require finding the Mega Well. To reach the Mega Well, you must descend into the deepest reaches of The Underneath and defeat its guardian, the Underdweller. There is a Whisper Stone right outside its lair for easy return trips later.

You can also find a town named Lichtlos in The Underneath. Lichtlos is home to a tribe of friendly iridescent Crystal Gels. Among them is a trader who sells the Happiness Egg, which is a sidequest which results in Pearlie's Ring which restores health slowly over time.

To reach The Underneath, continue past either blockage in Tomb of Kings East or West.

Sky Dragon Isle is a floating island in the sky, home to Sky Dragon Palace and Bellows, a village of Sky Dragon mo'o. Sky Dragon has recently gone mad and his palace has become infested with monsters. None of the locals can approach the palace, but perhaps a Sea Dragon mo'o can?

To reach Sky Dragon Isle you will have to find three Sky Dragon Tears then find the main teleporter to the area. Only Lisa can use the teleporter once all the tears are found.

Sky Dragon Palace is a rather normal dungeon with a boss and midboss. It has serveral new mechanics of its own but its defining feature is that some rooms can be rearranged by manipulating the air currents. You will have to order and reorder the rooms to find all the treasures and complete the dungeon.

For completing Sky Dragon Isle, you will receive the Sky Dragon Ring which grants an extra jump to all characters.

Splendor is a funderful place on a peak on Gale's Bluff. Recently, a friendly space creature named Mr. Funshine has crash-landed into Splendor, shattering his Meteor Rocket into pieces which have scattered all around the area. Mr. Funshine needs the help of a brave adventurer to find all the Meteor Chunks so he can have fun again.

Only Lydia can enter Splendor, thanks to her magical ability. To reach Splendor, find the teleporter in Gale's Bluff after completing The Manastery.

Splendor is a unique dungeon in that it has seven distinct platforming challenges to complete, each with its own mechanics. Of course, there is also a boss and midboss to contend with.

For completing Splendor, Lydia receives the Shiny Meteor which is required to make the Mega Conduit Ring.

The Cosmic Abyss is an incredibly dangerous dungeon located in another dimension. It is intended as the endgame and ultimate challenge in Zeran's Folly.

To access the Cosmic Abyss, simply reach the epilogue then talk to Ogg'sean to start a cutscene. He will practice shadow magic and inadvertently open a portal to the Cosmic Abyss. Monsters will pour out. Once the monsters have been dealt with, the portal seemingly solidifies and a voice bellows out from it:

"A CONDUIT TO EXISTENCE! MY BANISHMENT ENDS! SOON, THE WORLD SHALL FEEL MY TERROR ONCE MORE!"

The group doesn't like the sound of that so they decide to close the portal. It seems the only way to unlock the portal is to venture into the Abyss and stop whatever is keeping the portal open.

The Cosmic Abyss itself is a sprawling dungeon with multiple bosses, deadly enemies and several unique mechanics:

To complete the dungeon, you must find and kill all the sub-bosses then kill the final boss.

The Necro Pits is a minigame in the Hideout which involves exploring a procedurally-generated dungeon.

By default you can only enter with 4 hearts and no equipment but you can pay gelder to take more things in with you. The dungeon is rearranged each time it is attempted. There are random chests to find along with elite enemies.

The Necro Pits has a special currency (Necro Tokens) which can be used to buy special items or be used instead of gelder to take in extra equipment on subsequent attempts. Necro Tokens are found in chests and dropped by elite enemies.

At the end of the Necro Pits is the Necro Lord, a boss fight. Defeating the Necro Lord rewards some gelder and Necro Tokens. He gives a unique prize the first time he is defeated and extra tokens and gelder afterwards.