We're finally back with news about epic bossfights, sound effects and other awesome things!

So it's been a while since the last time I wrote something here. I've been feeling a bit demotivated, and I've also been quite busy with school. Anyway, now I'm back and I've made some awesome updates to Story of a Cube. Let's take a look!

As I've finished the game's second chapter, I've also added a new bossfight in the game. In the previous bossfight, you fight against a giant turret shooting huge loads of bullets. The second one is a bit different. Have a look at the screenshot below.

If someone can tell me how to stop Open Broadcaster Software

from crashing I'll be able to put a video here instead.

As you can see, you'll be chased by a giant moving wall with spikes on it. Isn't that terrifying? Just like the last bossfight it took a while to make, and I'm quite happy with how it turned out.

I've also been working on a little pause menu. Currently it allows you to change most of the settings while playing, except for a few things like the difficulty level. At first I was just going to freeze time when the pause menu was activated, but this didn't work at all, because the buttons couldn't be clicked while the game was frozen. Instead I've disabled the player movement and all active AI. This is working pretty well, but if you pause during any of the bossfights you'll probably die, as they're still enabled when the game is paused. I guess I need to work on that...

Story of a Cube is supposed to be a very juicy game, but how can a game be juicy if it doesn't have an awesome soundtrack and epic sound effects? Well, it really can't. So lately I've been making some lovely 8-bit sound effects using a program called Bfxr. 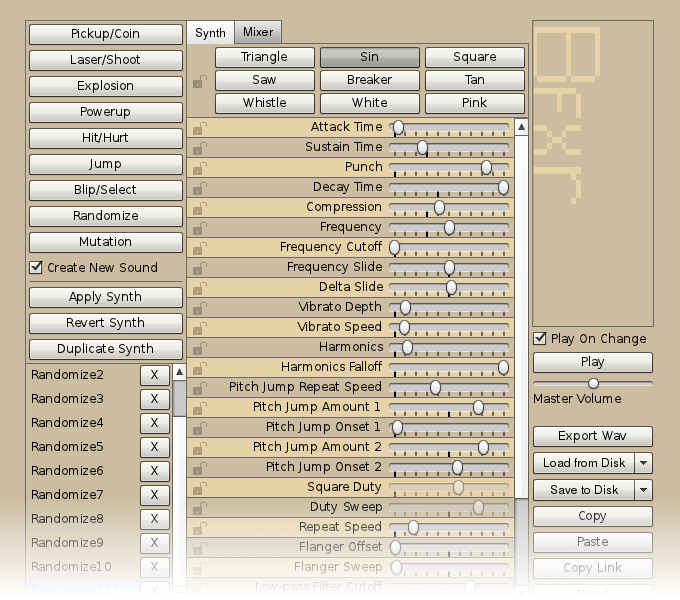 Bfxr is an elaboration of a small program called Sfxr, which was developed for one of the Ludum Dare game jams. It allowed developers to make 8-bit sounds quickly, so they could spend less time on making sound effects during the jam. Bfxr has a few more features, and though it's still rather simple, lets you create sounds with great variety. I recommend it for anyone who needs 8-bit sound effects, especially during game jams.

When working with sound in Unity, you'd normally use a bunch of audio source components for every object making any kind of sound. Since Story of a Cube is a 2D game it doesn't need all that fancy 3D sound stuff. Because of that, I decided to manage all the audio entirely through code. All sound effects are added to a class where they can be accessed easily. For example, if I have a sound effect for a large explosion, and I want to play it at 75% volume because it's a bit too loud, I just need to call

This can be called from any class in any script and also takes the user's volume settings into account. It doesn't require any variables to be assigned from inside unity, because all sounds are loaded as resources. They also don't need to be reloaded when a new scene is launched. Yay for code :D

So yeah, that'll be it for now. Expect more in depth stuff in the future. Don't forget to track this game, or you might miss something fun ;) Bye bye!