Emota Optim is a planet found on the fringe of a sector of the galaxy known for an abundance of Levisium™. It is relatively unexplored when Dynabot crash lands, peaceful and so filled with personality that even the clouds seem sentient. It’s not unlikely that the planet itself experiences emotions, ones no doubt as cheery as the creatures that reside upon it.

Emota Optim is a planet found on the fringe of a sector of the galaxy known for an abundance of Levisium™. It is relatively unexplored when Dynabot crash lands, peaceful and so filled with personality that even the clouds seem sentient. It’s not unlikely that the planet itself experiences emotions, ones no doubt as cheery as the creatures that reside upon it.

The resident aliens suggest that this Levisium™ rich planet is too good at fostering life, with beings evolving from improbable beginnings such as a centuries-forgotten hot drink. The resident species are simple and trusting, lacking the healthy dose of scepticism recommended by the Galactic Health Authority.

Many of the creatures that live on Emota Optim originated from some form of plant life. They rely on the abundant flora and Levisium™ found within their planet to thrive and survive. In fact, it’s not uncommon for an alien species to grow from seeds or end their life cycle as plants. The ecosystem is interconnected and balanced. Any disruptions could cause great ecological harm. An excitable robot with a laser, for example. 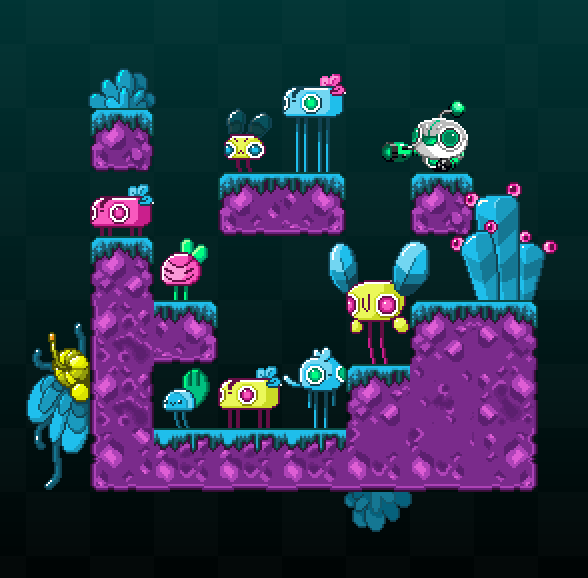 Leafids form close-knit communities and can often be seen climbing upon each other to form precarious stacks. They do this not just for greater visibility or to reach the top shelf, but also because of the unfounded idea that the higher they are, the slower they age. Unfortunately, as their bodies are so light, many younger Leafids are blown from the stacks on windier days, often never to be seen again.

With leaf formations that have evolved into wings, Flylioles often feel superior to their genetic cousins, Leafids. Their ability to fly has given them an adventurous streak, and their odd desire to fly towards the light has earned many Flylioles more than one near-death experience.

Dandions, upon deep introspection, have decided they have no great desire to achieve anything of consequence with their lives. Lost in another world, Dandions drift around looking for low-hanging fruit, or soft patches of ground. They don’t ask for much. Or for anything at all, really.

Born with no limbs and no particular desire to go anywhere fast, Jellyn can usually be found doing exactly what they do best, jellin’ out with some sick beats. Just hope to not find them jellin’ together.

Made up entirely of a gelatinous slime that may once have been food, Goomes are driven by the intense fear of doing real work and would make great politicians if they weren’t so immensely busy hiding from their responsibilities.

Nobody can quite remember when Agrave Neveria first started popping up on Emota Optim, but they’ve never been a friendly type. They are seemingly grown from a desire to inflict pain on any creature lucky enough to gain locomotion. Agrave Neveria cannot be trusted, despite the friendly-looking skulls contained within their gelatinous bodies. You don’t want to know where they got it.

For a perpetually burning plant, Combustulips can be amazingly chill—except for when they’re not. Combustulips have short tempers, big appetites, and can hurl parts of their own flaming body at anyone deserving of their wrath. Cute, right? Not so cute when they’re roasting you alive.

Kabloomers start out happy and full of optimism about the future, but as they grow older they learn through observations and the Leafid vine that they are at risk of spontaneously detonating at any moment, it's at this point that all their lofty dreams of space travel, running fine dining establishments and buying a plant-based yacht are crushed. As such they spend most of their remaining lives trying to stay as still as blooming possible as not to set off their explosive defenses. 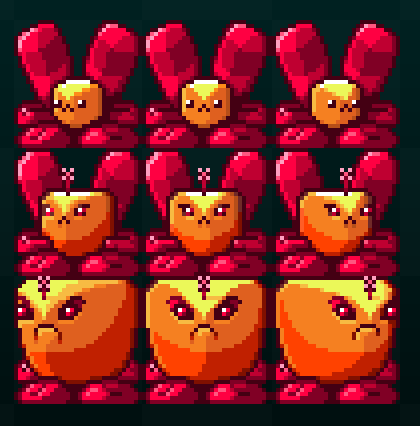