Today we are showing off the most important piece of artillery for the French during both world wars, the legendary Canon de 75.

Today for Armistice Day, we are showing off a render of perhaps the most important of the French artillery pieces in the first half of the 20th century, the famous Canon de 75. 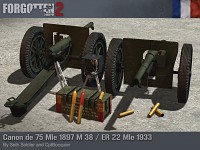 In 1891, the patent for a hydro-pneumatic recoil system was sold by its German inventor Konrad Haussner to a commercial firm. Krupp was known to the French to be working on a design using this patent, and the opportunity to buy rights for themselves was appealing. Upon reviewing the blueprints, it was decided instead to work around the patent. Such was the secrecy surrounding this development, that the leaking of documents to the Germans sparked off the Dreyfus Affair, that split public opinion when evidence that the original conviction for treason might have been made on false evidence emerged.

In 1894, the final experimental 75mm artillery gun was ready. It initially showed promise, but further testing showed that it suffered the same oil leakage problems that had stalled the German attempt. This would be solved by a redesign of the piston that separated the oil from the compressed air. Fitted with an automatic fuse setter for shrapnel shells, the gun would finally be accepted into service in 1897.

The French 75 would prove itself in the First World War, with its ability to fire up to 30 aimed rounds a minute proving deadly in the battles of the Marne and Verdun. The French started the war with 4100 guns, and would build another 17500 in the following 4 years. By the Second World War, many of these guns were still in French service essentially unaltered, with thousands more in the hands of the Polish and Americans.

The modifié 1938 exchanged the solid wheels for tyres, allowing the gun to be towed by motorised vehicles instead of horses. Ours was made by Seth Soldier, who also made the ammunition statics. CptBocquier and Luacha 2000 made the ER 22 radio.