in this installment we learn why the news update was late and why no levels have currently been shown!

Hey Extraneous watchers, fans, and newcomers! This month we have something a little different...

We wont be revealing assets, plot choices or cool new scripting
We'll be talking about why there was a lack of a news update and why we haven't shown off any levels

For the past few months I've been raising the money for a new computer.
The reason I want one? Simple. I'd like to make the assets a little higher poly than they currently are, but the computer I'm using right now won't let me go over 20k tris. Now I'm not saying this is how big all models are going to be, this is just how big they are before optimization. Regardless it allows for crisper models and more realistic environments. I'm getting close to my goal but I'm still missing a few parts.
My not having a steady job, and already kind of hectic schedule has contributed to the lack of any level design/content releases in the past month, for this I apologize.

However we do have a little bit of exciting news, source engine 2013 was released and we nearly fainted when we saw it. Also I've picked up a "For dummies" book on C++ and we should have some actual things done here in a couple weeks.

Also Extraneous has almost been around for a year now...
Time flies fast huh?
Here, have a back-shot of the main character's torso! 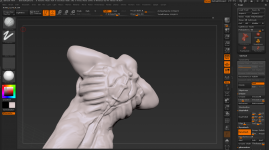