We're finally knee-deep into development again, working on delivering new updates in the coming weeks and months. We're also continuing to work on expanding the team to make Foxhole even bigger and better in the future. The details are still being worked through in the hiring process, but you'll most likely be seeing some new team members join the Foxhole team in the coming weeks. Stay tuned!

I also wanted to remind you guys that we will be at PAX West next weekend. You'll find us at booth 6218. Don't forget to stop by to say hello!

The release of amphibious warfare features has been delayed several times now due to both feature creep and the major stalls we had in our development pipeline at launch. We're finally ready to commit to a solid release date. Amphibious Warfare will be coming on Thursday, September 14th. We'll be talking about this update more in the coming weeks, starting with this devblog.

In lieu of the Landing APC being released in the next update, we've made a short video that showcases this vehicle in-game. There have been a lot of questions about how the Landing APC will function, so we've taken the time to answer many of them here. I highly recommend checking out this video.

The Shipyard is a rebuildable world structure that will exist on water heavy maps like Endless Shore and the upcoming Farranac Coast. It will be used to build water based vehicles such as the Barge (see below). It is also the only place where ships can load/unload cargo. In order to secure a shipping lane, Shipyards on both ends must be captured and rebuilt. 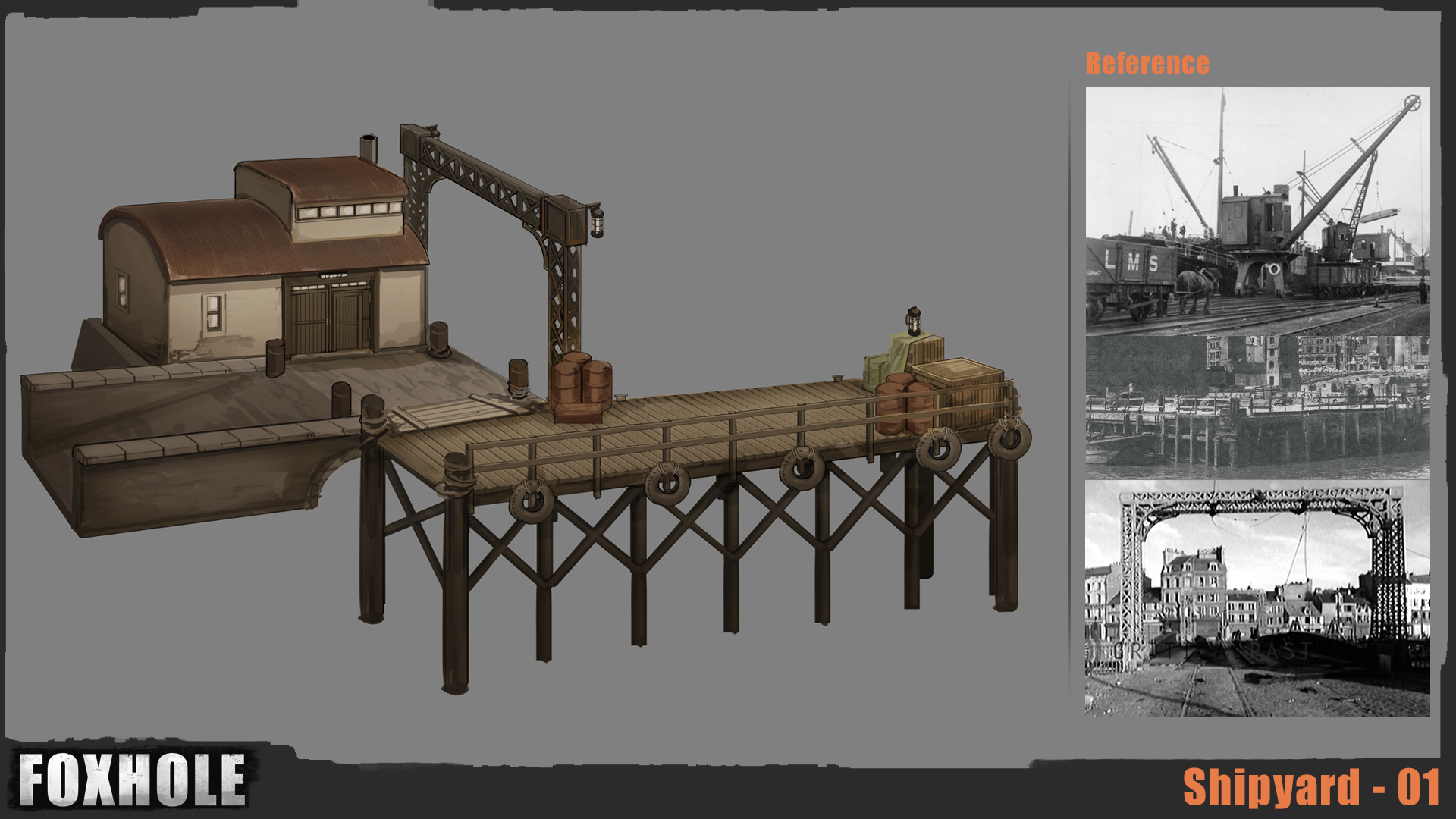 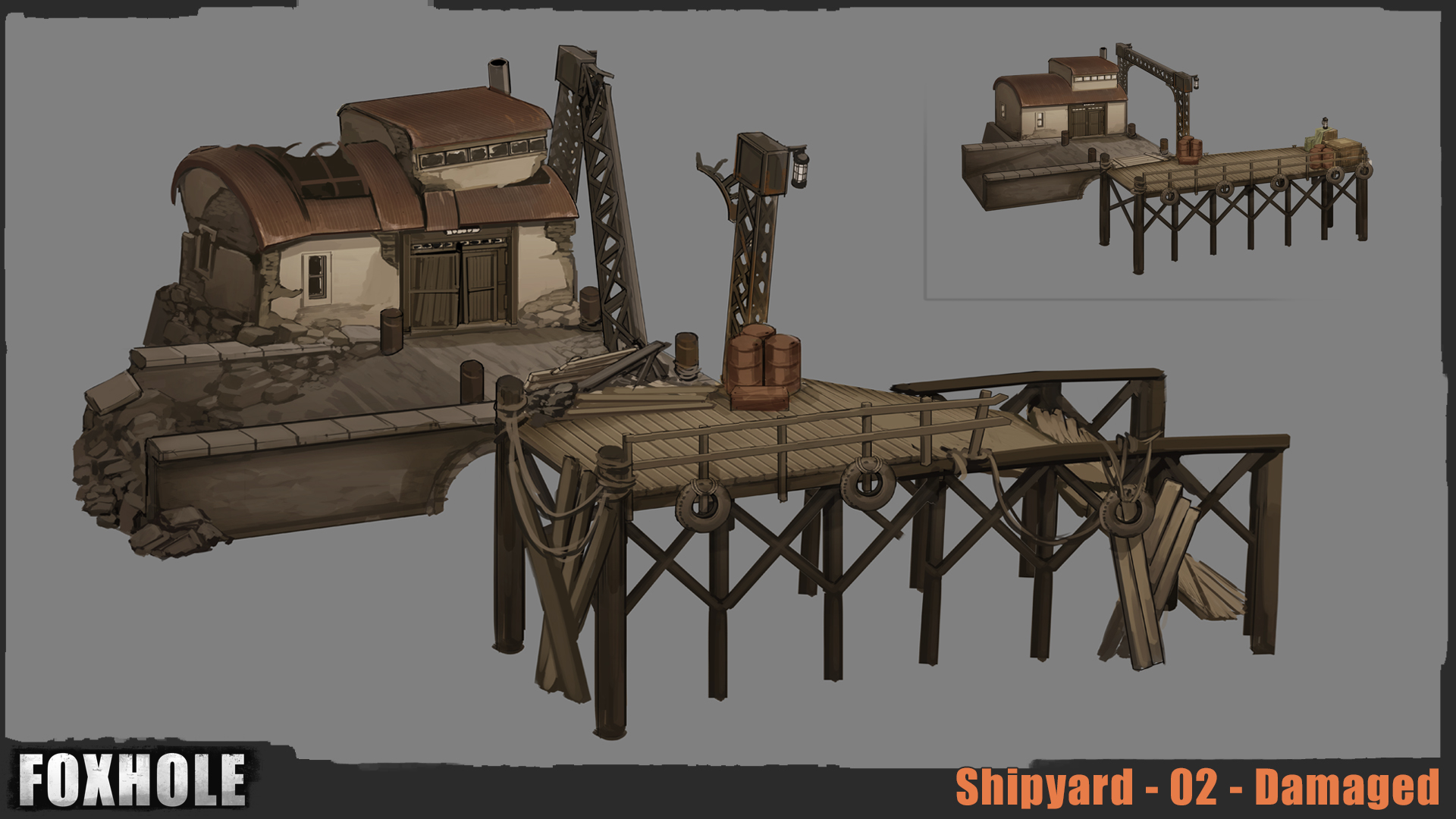 We had several ideas rolling around on how players could move vehicles across bodies of water that weren't connected by pre-existing bridges, including allowing players to build their own bridges. In the end, we felt that the allowing players to ferry their vehicles via a barge of some sort was the most flexible solution.

The Barge is a lightly armored, slow moving ship that can ferry heavy cargo like vehicles, equipment, or infantry across rivers and canals. Unlike the Landing APC, the Barge must dock at a Shipyard to load/unlock cargo. Due to it's lack of armor and defenses, it should only be brought through shipping lanes that have been fully secured. 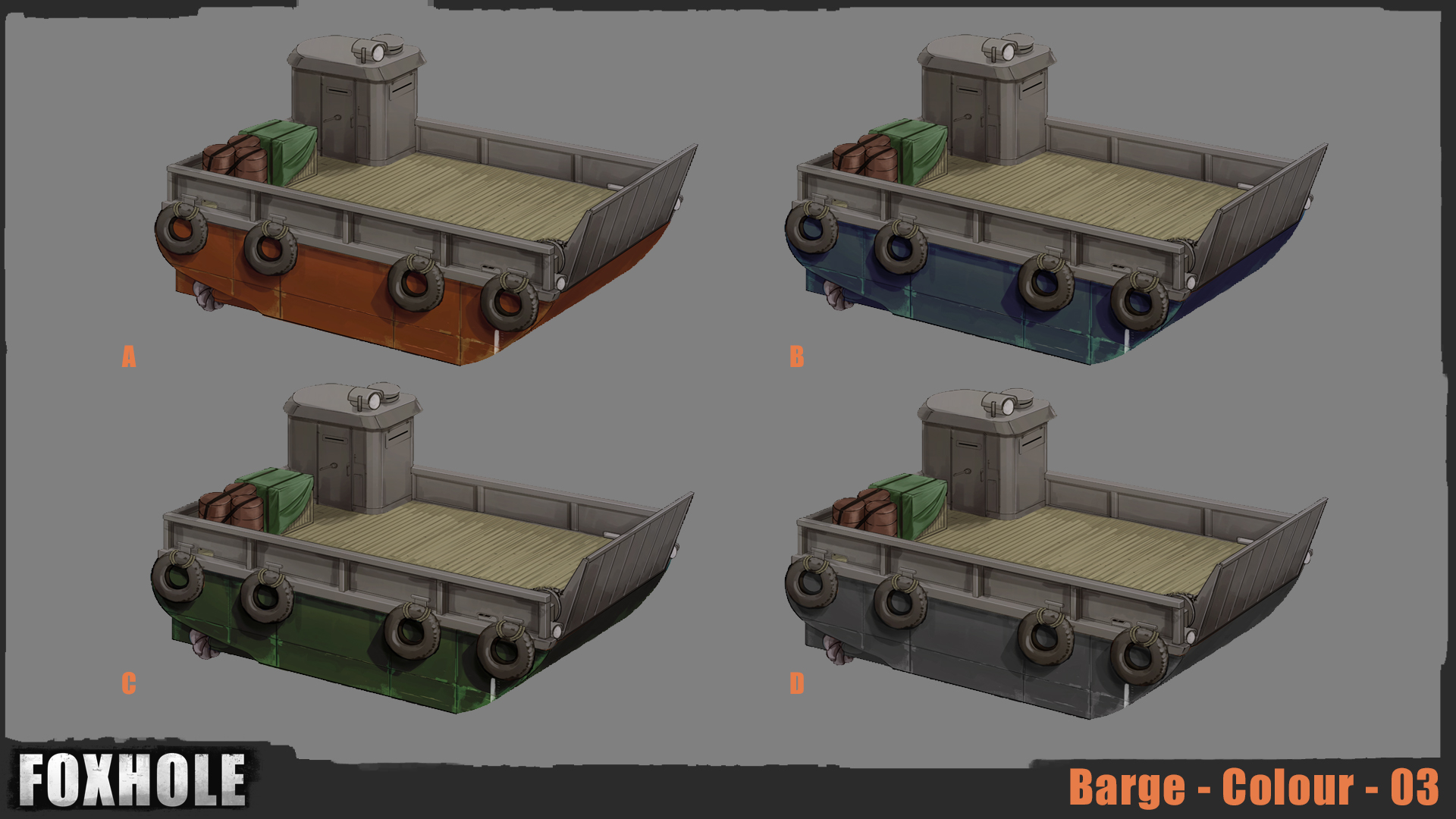 Concepts of the Barge with colour variations 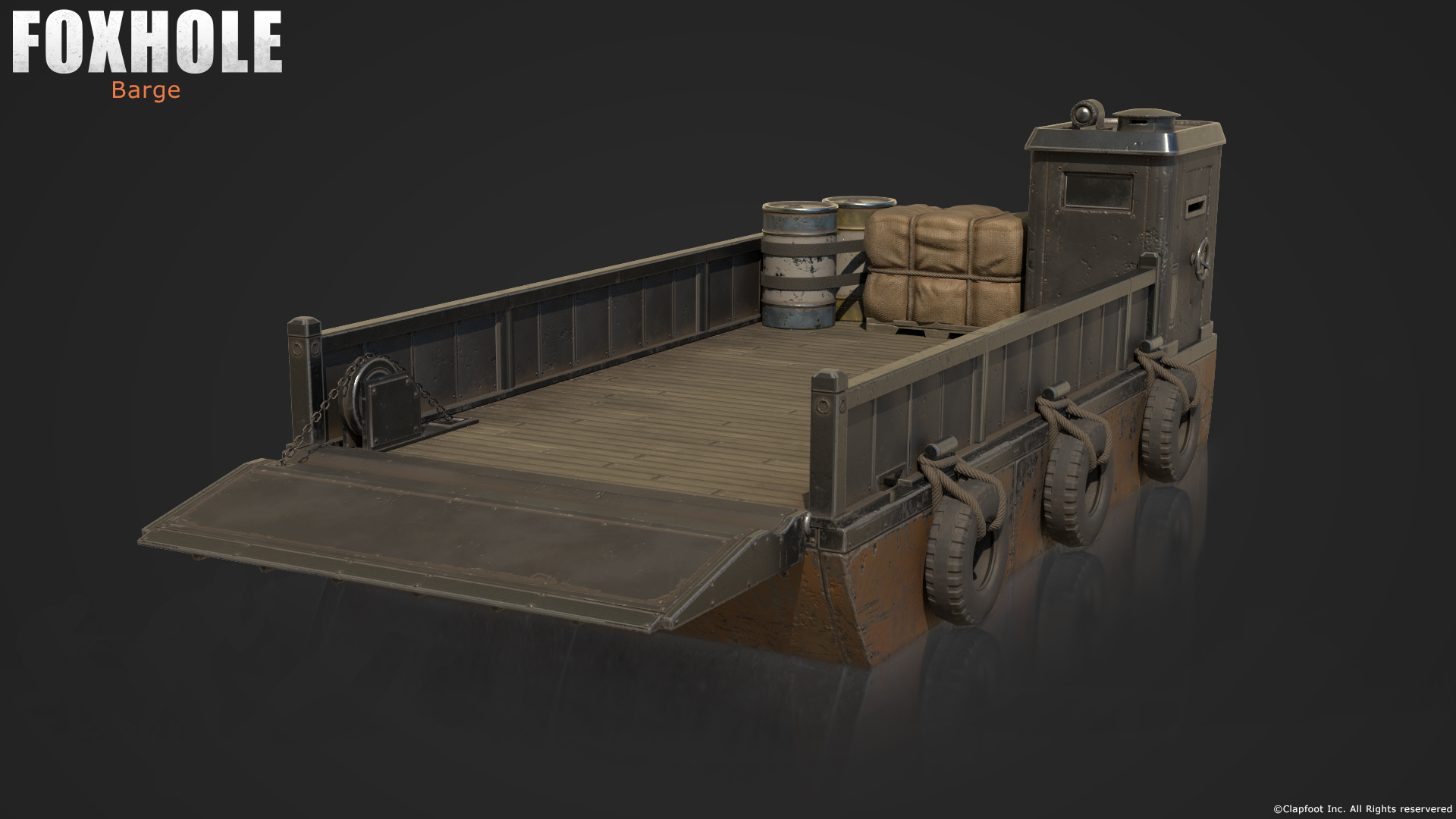 In-game model of the Barge

Ever since we removed Land Mines from the game months ago, we've been figuring out a way to bring them back. Mines didn't work previously because they were easy to grief with, caused a lot of accidental friendly fire incidents, and weren't used effectively very often. After months of thought, we're ready to bring them back in the form of Anti-Tank Mines.

Anti-Tank Mines will detonate when heavy vehicles like Half-Tracks and Light Tanks drive over them. They will be fully visible by infantry on foot. More than ever, it will be important for heavy vehicles to be escorted by foot soldiers. Mines can be dismantled using a wrench. 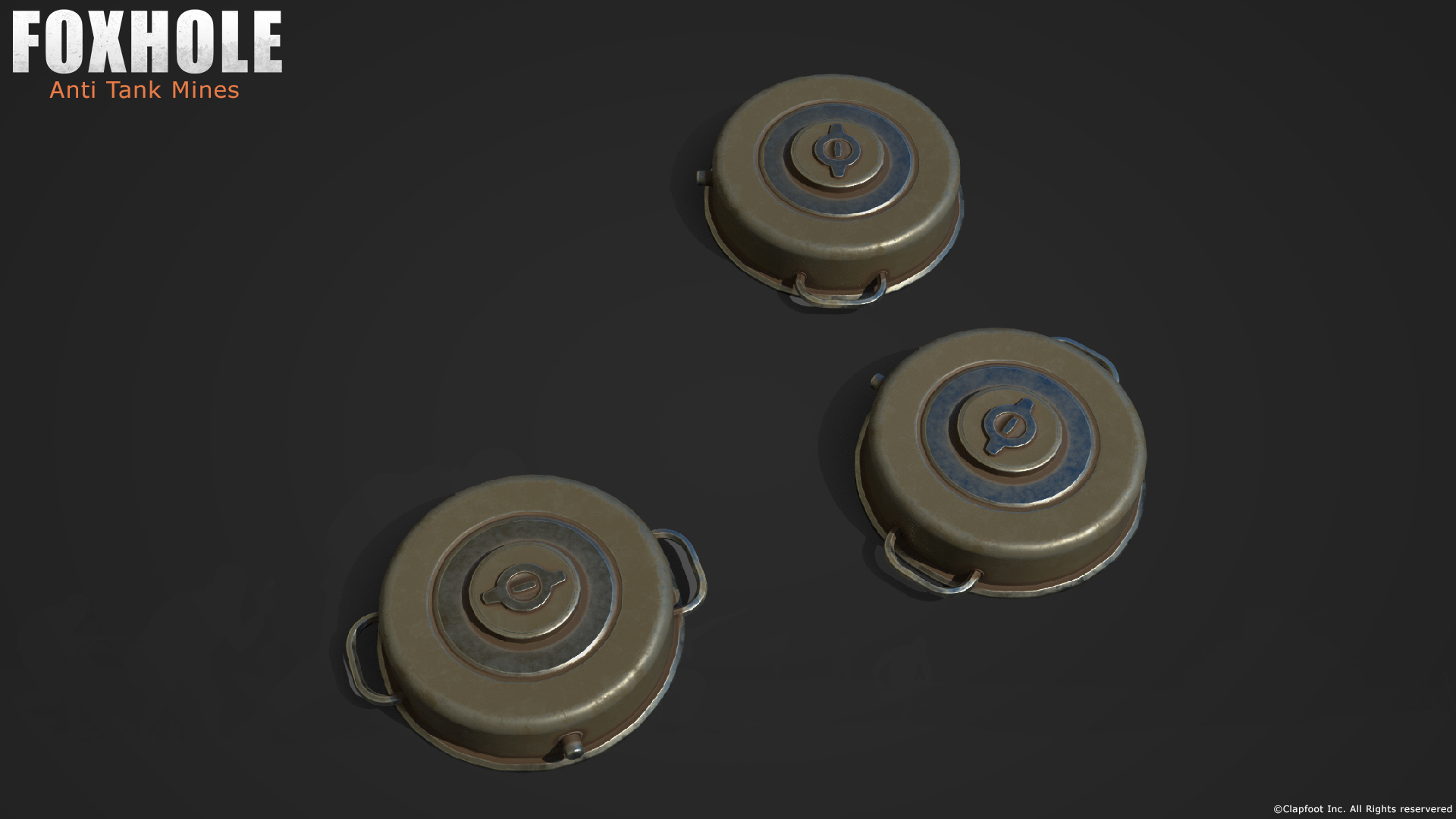 Anti-Tank Mines can be used to slow armored vehicle attacks

With our current focus on non-combat features for Foxhole, we're going to be adding an ability called Slow Wounds that will allow players to aid critically wounded friendlies and keep them alive for a couple of more moments in battle, hopefully long enough for a medic to arrive. The ability is stackable, meaning that mulitple players can apply pressure to the wounds of a downed player, keeping that player alive for even longer.