After two weeks of alpha testing, we've got our sights set on building a much better Beta build. We're continuing to work on implementing more features and animations along the way.

After two weeks of invaluable feedback and many hours lost to exploring the nooks and crannies of the Terroir 0.1, our alpha test is done and dusted. In the beginning, we expected maybe a dozen testers, but ended up with three times that - and the applications still keep coming.

The biggest take away from the test is that there are quite a few additions to add to the UI to improve gameplay feedback to the Player. There were many things our testers pointed out that needed fixing or improving that we weren't able to spot, simply because we were too close to the game to recognize them as issues to new Players.

We'd like to say a very huge thank you to our testers. Here is a list of all the feedback we received from them and are currently implementing into the game:

Aside from this, we've also started work on localization. It's highly likely that language support will role out in batches, as some languages are more high-priority than others. If we can get them all out at once, we will.

We're also fine-tuning a few more animations, like our Mystery Box below (the Mystery Box is a placeholder name for our random event and mission system):

Every year, Players get the chance to open the Mystery Box and choose between CHANCE or CIRCUMSTANCE. Choosing the CHANCE card generates a random event - either a positive or a negative one. Choosing the CIRCUMSTANCE card gives the player a mission to accomplish. Failing the mission has a considerable negative impact on the Player, while accomplishing it could potentially reap great rewards. It's an extension of the underlying theme of Terroir - that as a vineyard manager, not only are you often times at the mercy of the weather, but also subject to the whims of the industry, market and fate itself.

Another change we've done is expand the maximum tile count to 33 tiles from the previous 19. That way, the Player can expand their vineyard even more to increase productivity. Here's a screengrab of the game's main stage with all 33 tiles visible. 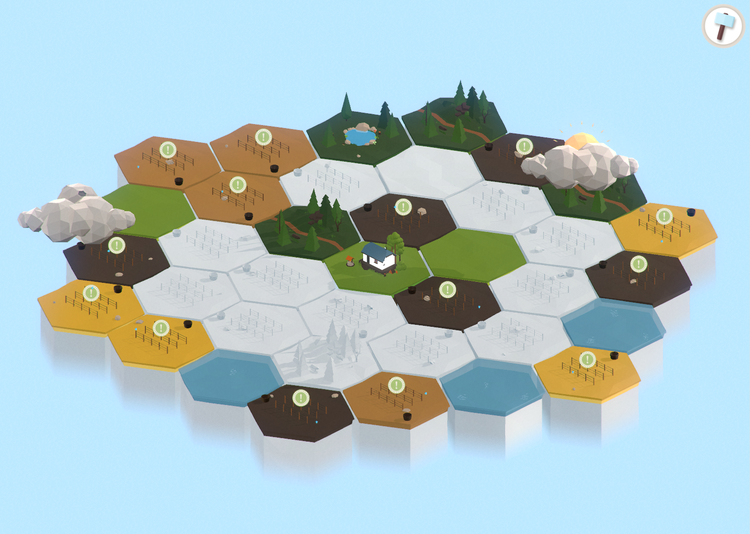 Aaaaaaaand that's it from us for now. We work non-stop. We don't sleep, we're like fish (that's technically not true, but you get our point). We'll be heading into a Beta test some time in the last week of April. After that, we'll work towards the end game and play by ear. But so far, we're very happy with out progress - the game's potential is really making itself apparent, and it's a struggle taking a step back and determining what's worth pursuing and what we're better off leaving alone for now.

Speak to you all very soon!