Description of what Cogmind will and will not include in the first Alpha Access release.

Cogmind's first public alpha release, scheduled for May as announced earlier, will be both playable and fun, but by no means done. This post explains what will and will not be included in the first release, and where development will go from there.

First and most importantly, what exactly can you already do in the game?

Simply put, Cogmind is functionally complete. I wouldn't want to launch anything that doesn't already offer an enjoyable experience. Thus we have the entire core game and its wide array of mechanics:

Even once you know the mechanics inside and out, procedural maps combined with plenty of unique content mean the game already contains a huge amount of replayability. Content-wise there is currently plenty to discover and experience:

If you've played the prototype from 2012, and many of you did and had great things to say, it's like that only x100.

What are we missing?

While it's likely we'll be adding a few new mechanics later on, that part of the game already offers a complete experience. What we're missing from the must-have category of features is a rather large chunk of the world and related content that guides the overall experience.

Essentially we have a lot of core content as described above, but need to add much of the complementary content that makes up the world, as well as a few features that glue it all together. That's an abstract way of explaining that we're missing:

As you can see, most everything "missing" can be considered fluff as far as traditional roguelikes are concerned. There is already a fun and mechanically deep game to play, but it will grow to be an increasingly compelling experience as development continues towards 1.0.

Another point worth making is that balance will be rough at first. This is intentional, because planned content will be used to counterbalance some of what is already there. Currently, unless you really know what you're doing, you stand a good chance of getting roflstomped around the half-way mark (I still want to do a bit more balancing before release, so it's possible it'll get a little easier, but my goal here is not to make an easy roguelike--if there even is such a thing).

The purpose of releasing the alpha version in its current state, shortly after the conclusion of what I consider pre-alpha development, is to demonstrate the game's solid foundation and make any necessary adjustments before building an entire world on top of it.

That latter stage will be relatively quick since all the building blocks are in place, but we may want to tweak some of those building blocks beforehand, and large scale feedback has the greatest chance of suggesting meaningful changes. And not just subjective player opinions, either--a wide array of optional metrics will let me know how players are interacting with the game and help guide development in the intended direction. This is something I can't do myself or with just a handful of playtesters.

The remaining path towards 1.0 is 90% decided by the design doc, but the other 10% is fairly flexible, with additional features beyond the full release also possible.

See the diagram below for a visualization of the game's current state and future direction: 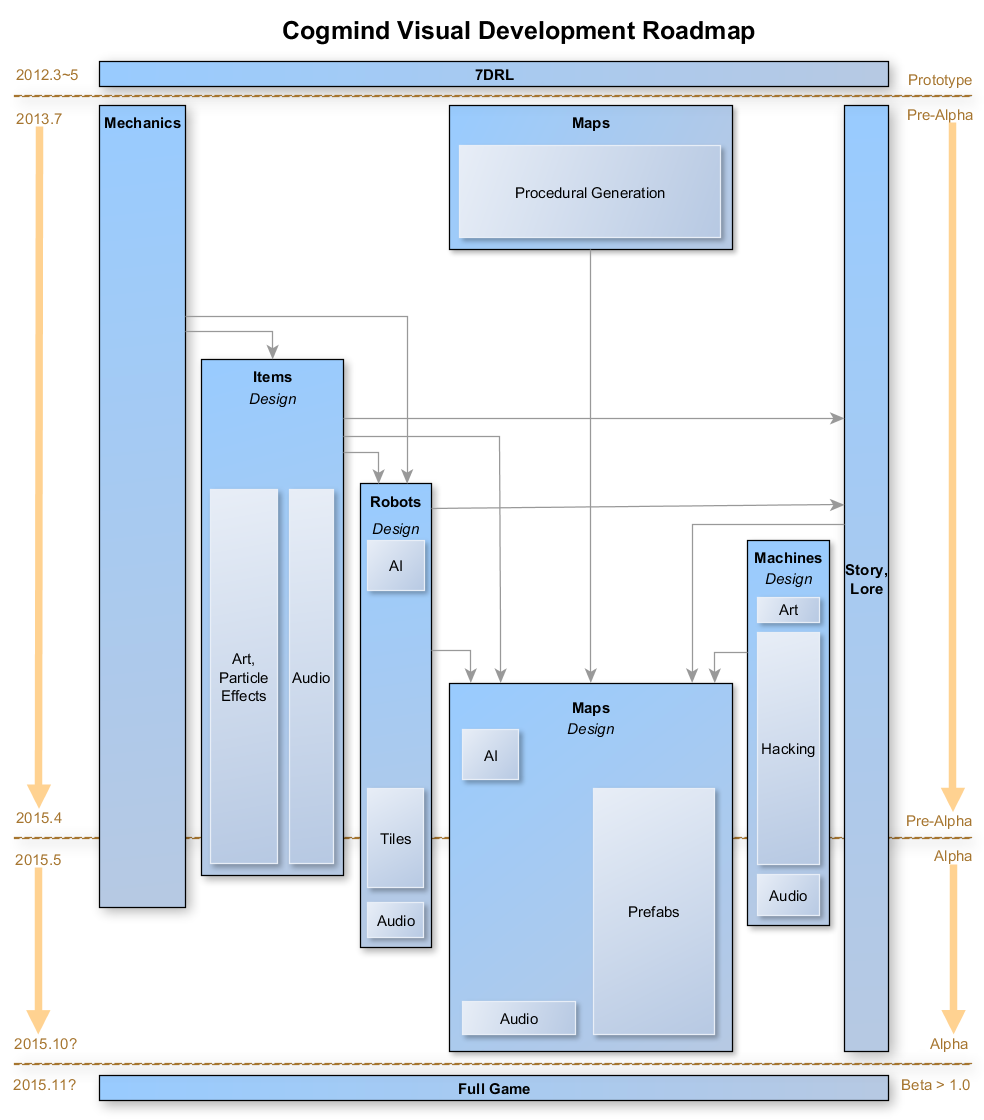 As you can see, the vast majority of work to do is world building, which aside from a few little things here and there is mostly about adding maps and whatever other unfinished content they might need. For a more specific breakdown of features to come, see the new roadmap maintained on the website FAQ: 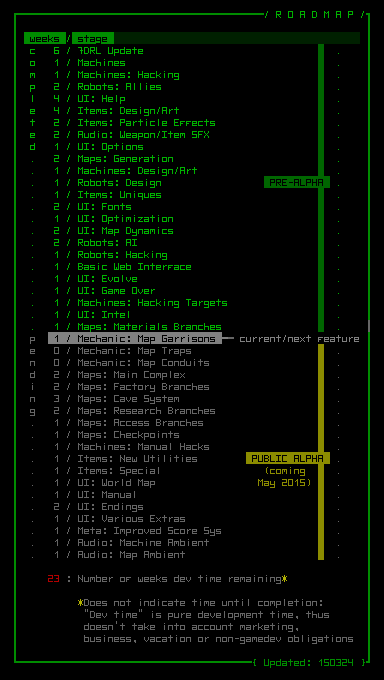 It's difficult to predict the long-term time frame with any certainty, because much will depend on how the game is received. There is a minimal "I must do all these things for Cogmind to be what it should" list, and a separate "if Cogmind is popular enough I'll be happy to run with it and add more" list. The final game probably lies somewhere in the middle, but I can't be sure which of those features will be added and when, so the indicated times are only rough estimates.

One thing is certain: During the alpha-beta period updates will come frequently. With all the game's internal moving parts in place, creating the rest of the experience will be a smooth process.

Nice cant wait. not so far away! and it seems like it was yesterday that I found this game when actully it was 1 year ago :D

Ah, so you found Cogmind even before it arrived on IndieDB :)

Well, thanks for sticking around so long... it sure does take a while to make such an expansive game!

"(mostly ranged, but melee is an option)"
Will melee players have some sort of skill to teleport instantly to enemy? Will melee range have some bonus against some enemies i.e. enemy with rockets will damage itself?

No special skills, no. All your capabilities are bestowed by your attached parts, and there is no such component. Melee weapons will generally be used as a backup, or in combination with certain strategies. One such strategy is actually akin to teleportation: Just be so fast that you can fly up to an enemy before they have a chance to fire. You can also just hide around corners and ambush approaching targets, or maneuver behind objects/machines and force them to come around at point blank range.

There are almost no enemies with explosive weapons, so that's not something you'll be dealing with very often. Most enemies, unless melee attackers themselves, will sometimes try to back away from you if you're fighting them with a melee weapon.

Melee weapons do have special advantages that make them desirable in some cases, as discussed before: Indiedb.com