Alpha release is almost upon us, here's some new features that the Alpha will have, including a 2nd business to own!

As the title suggests, we're getting close to the alpha release. As you may have noticed, I decided to switch it simply to Alpha rather than Pre-Alpha.

A lot of stuff has happened since my last news update back in July, if you've been following me on Twitter (I know some of you are), then you'll have seen me tweet almost everyday about things I've been working on.

The save/load system got updated in late July with all the new information that needed to be stored, such as business information, NPC data, inventories, owned property etc., they now all save and load correctly.

A speedometer along with the current speed limit of the road you are on has been added, although there's not much use for it yet, as there's no penalty for speeding, more just to see how fast you are actually going, easier to compare car speeds.

The manual got updated, removing outdated info, and added a better introduction page, which tells you how you should start your game, and gives you the controls.

Sounds have been added for colliding with objects, which means you no longer silently hit into objects at 191MPH.

A 2nd business to own has been added, on top of the Video Game Retailer, you can now also manage a car garage business. Cars will periodically enter the garage with a job they want doing, you go to the shops computer to buy the parts which the cars need, then you go over to a car and fix it, earning yourself some profit in the meantime. 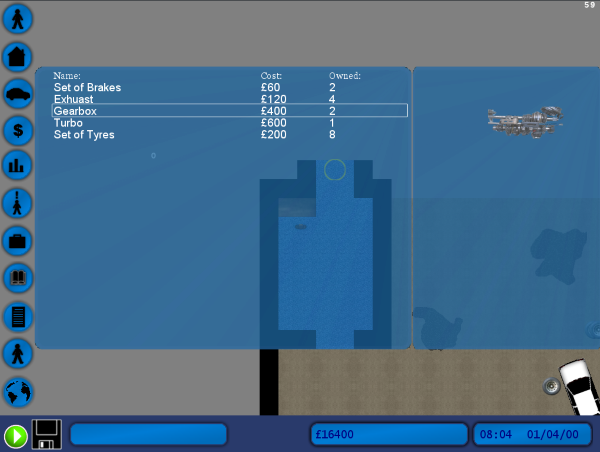 You can buy the parts you need using the shops computer.

I plan to make this a little more in-depth, and make it a little more varied in the future, but it does the job for now. More profitable jobs on the car take a larger chunk of your day however. 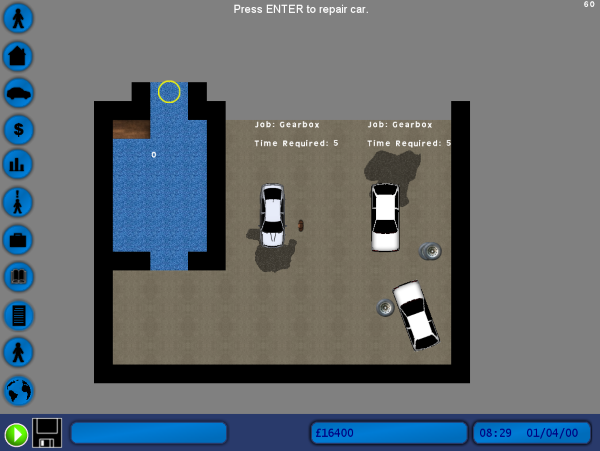 Cars can have varying jobs, affecting the time taken to fix them, and the amount of money received.

Before buying a business, you'll also receive some info about that business, to help you make your decision.

The map system has been completely re-done over the past 4 days, instead of simply overlaying a sprite on the screen, opening the world map will now show a scrollable/zoomable world map, which will allow me to create a much larger world, and allow you to navigate it easier. 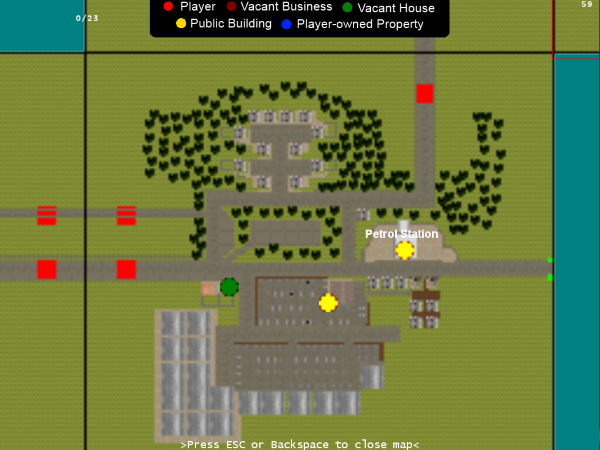 Zoomed in on what is currently "Room 3". Debug numbers at the top left show total number of properties owned in this area, and total that can be owned.

I am currently working on owning additional property. You can't enter these properties, but once you own them, they'll work in the background to earn you profit via rent. Also, owning properties will increase your companies influence in the area, something which will play a big role later on in the game.

The world map will also be updated to display company/government influence in areas of the world. 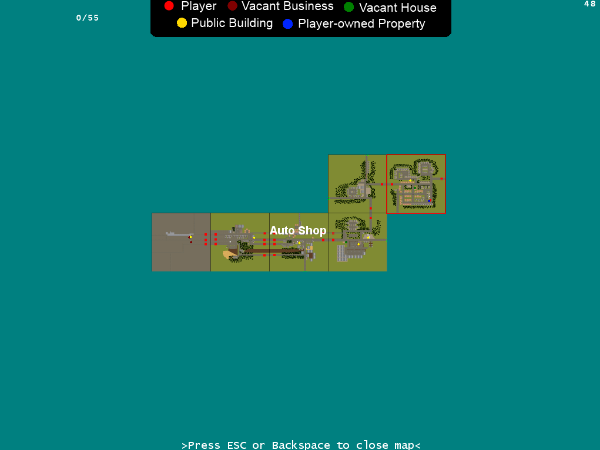 A zoomed out view of what is currently the world.

To be kept up to date on all the latest development news, follow me on Twitter, Track This Game, and check out the official IRL blog.

If you want to suggest something, or ask me any questions, just comment below, or post in the forums.