The latest info about the rebooted Alpha Project mod.

Posted by MariusMaximus on Dec 8th, 2020 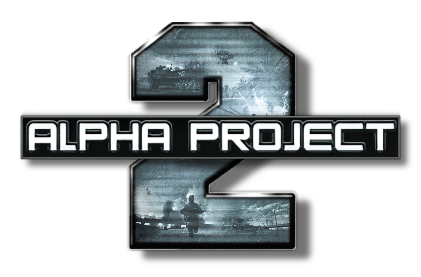 Thanks for showing interest in this project by either reading this and/or for commenting on last month's post. The feedback was a little beyond what I expected. Please stay tuned and continue reading to get an idea of the road ahead.

So it's been about 5 years since we officially stopped development on this mod. I had been around for about a year leading up to the conclusion of the development and was really sad to see the mod ending. I was mostly helping JONES out with general things such as getting weapon model variations prepped for the customisation amongst other things. When we stopped development I had immediately started my own project, because I had no motivation to fix and optimise the sheer amount of content that we included in the final release. By that time only JONES and I were left in the team, so the task was not realistic with him leaving as well.

- So what has happened since then?

Looking back at the final release I still think it's next to impossible to fix all the issues, so what I have been doing is to rebuilt the mod from scratch with a strict quality assurance policy. Consistency is also one of the biggest things I stand by. So what does the rebuild entails? In essence it means that I am slowly re-implement current Alpha Project features into the unreleased BF2: Unlimited Action mod that I have been working on for 5 years. The BF2: Unlimited Action mod will be put on hold for now until I can decide its fate, but in all honesty both mods have a lot of common and it's safe to expect all the advertised content in that mod to make its way into the next release of Alpha Project. What you can assume from reading that is that there is about 5 years worth of content that hasn't really been seen a lot.

- Going forward and the mod direction

Due to the mod having BF2: Unlimited Action as its foundation now, the gameplay will be a bit more akin to vanilla BF2. So I am definitely going back to not only the roots of BF2 but of AP as well. The first and second releases of AP were distinctly different than the last release because the mod veered more into the direction of adding experimental features and innovative content than making cut-inspired content. So with the next release you can expect a similar release than the very first version of Alpha Project, but with the customisation system added and a lot better graphics that have never been seen in BF2. It will be a very, very small build with not a lot of content, but that is due to the fact that this mod is also an HD mod now and most of my time went in making it HD and also to guarantee gameplay stability with no crashes. Below you will see the alpha inspired Gulf of Oman map with the new, updated graphics. Making this game HD is very time consuming, but it's a trade-off that I am willing to make than having a lot of maps, guns and vehicles. As time goes on, I will be releasing more and more content from the previous releases, but in a more polished state. JONES made incredible maps for this game, however some will have to be modified due to stuttering performance issues amongst other things, so therefore I will leave his maps for the next release.

- So what will be in the first release?

Like stated above, this will be a very small build insofar as the amount of new content is concerned. However the content that will be there will be very refined and polished. The whole mod's weapon arsenal has seen remade animations and the weapon models have also been changed to accurately show the new direction of AP. A big thanks goes to Develop013 that has remade the animations! He's literally reanimated not only all of the original BF2 weapons, but also all of the BF:Play4Free weapons and other miscellaneous weapons from other games such as BF3 and BF4, so expect a lot of weapon surprises to pop up!

So to summarise, expect a whole new first person gameplay experience in terms of the visuals and sounds. The mod will unfortunately not include a lot of maps at first, however that will change as the development progresses. The map list is as follows:

The other middle eastern maps will be included with the subsequent release. The third release will then include the Chinese faction and European Union faction. Luckily most of their content has already been completed, however their customisation system and maps haven't been started with. So technically the first release is the one that will take the most time, and all of the following releases will follow up quicker.

- When will the mod release?

This is something I cannot answer. Being the only guy working on a large undertaking such as this is very time consuming and difficult. I urge and plead any available 3D modeller to contact me since this will help to speed up development significantly. If all goes well, I should be done by the 3rd quarter of 2021. 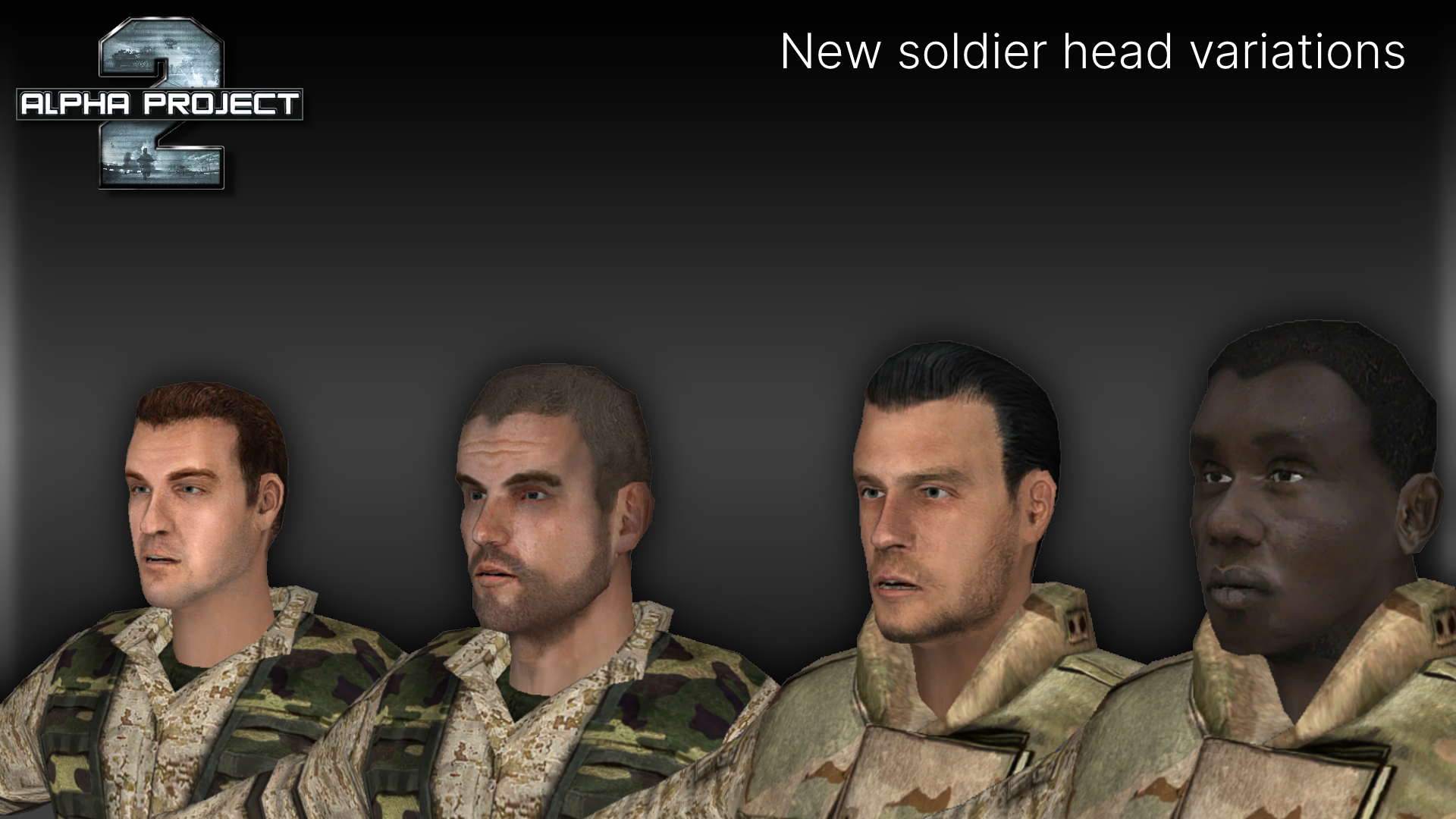 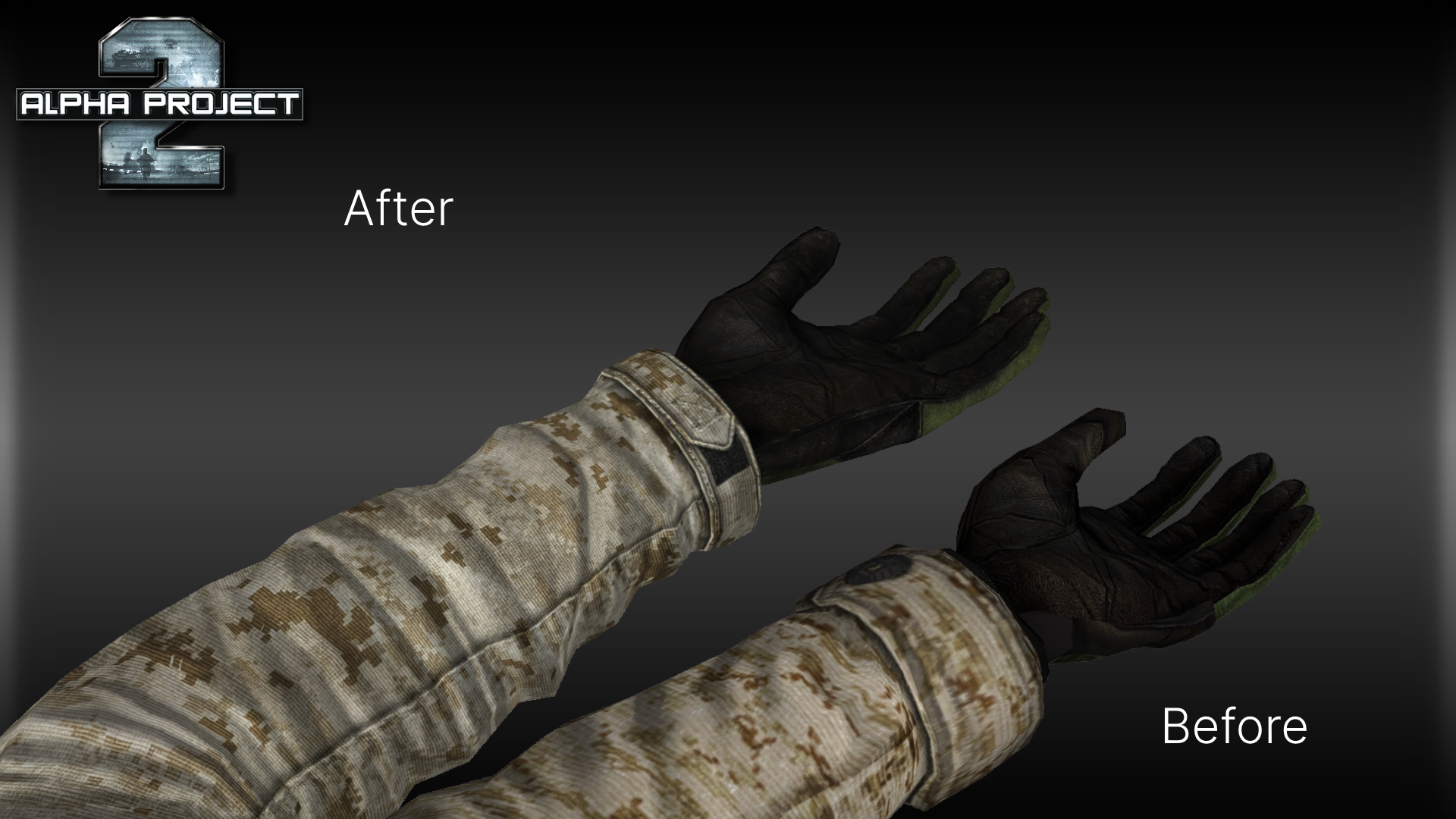 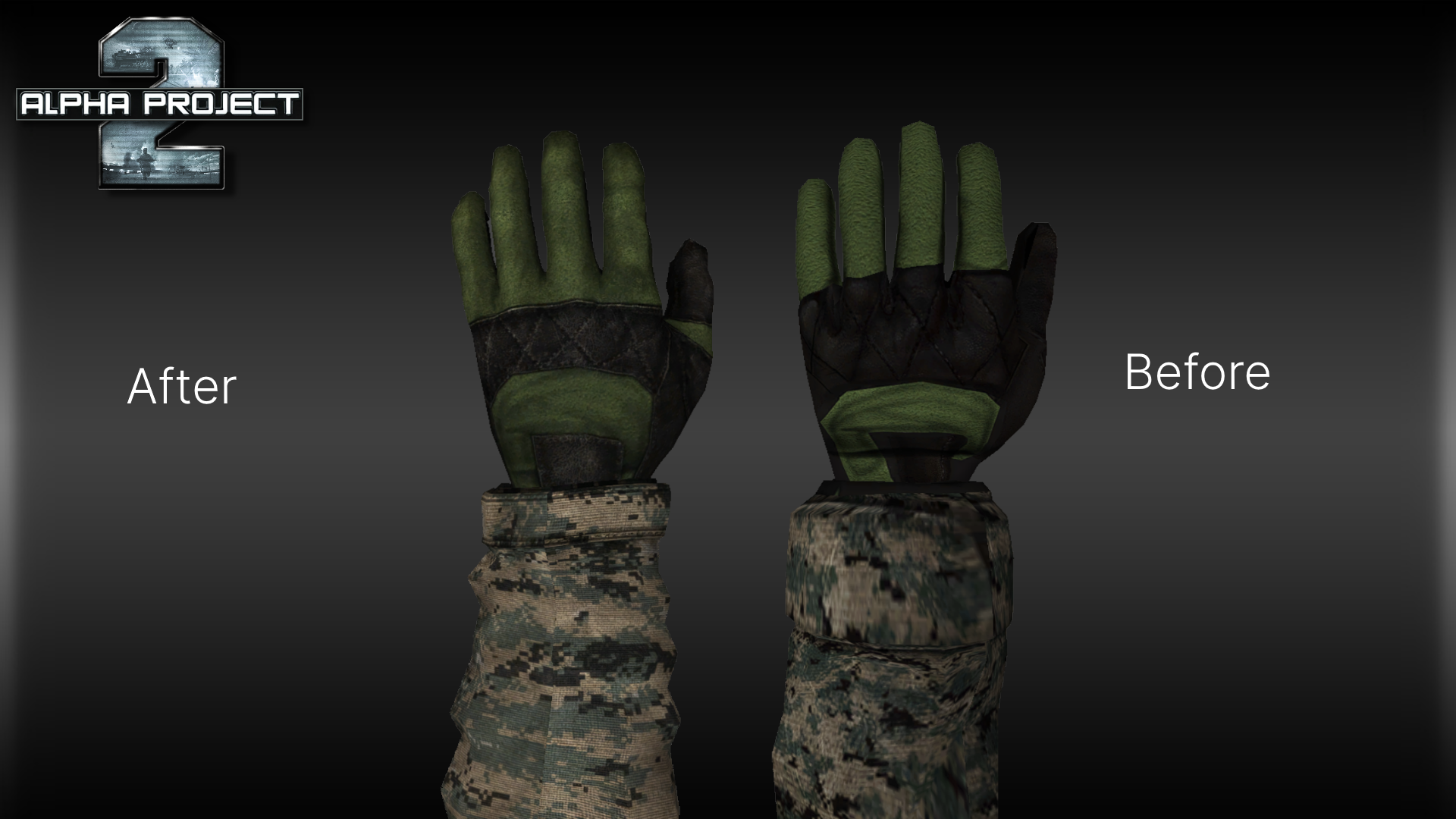 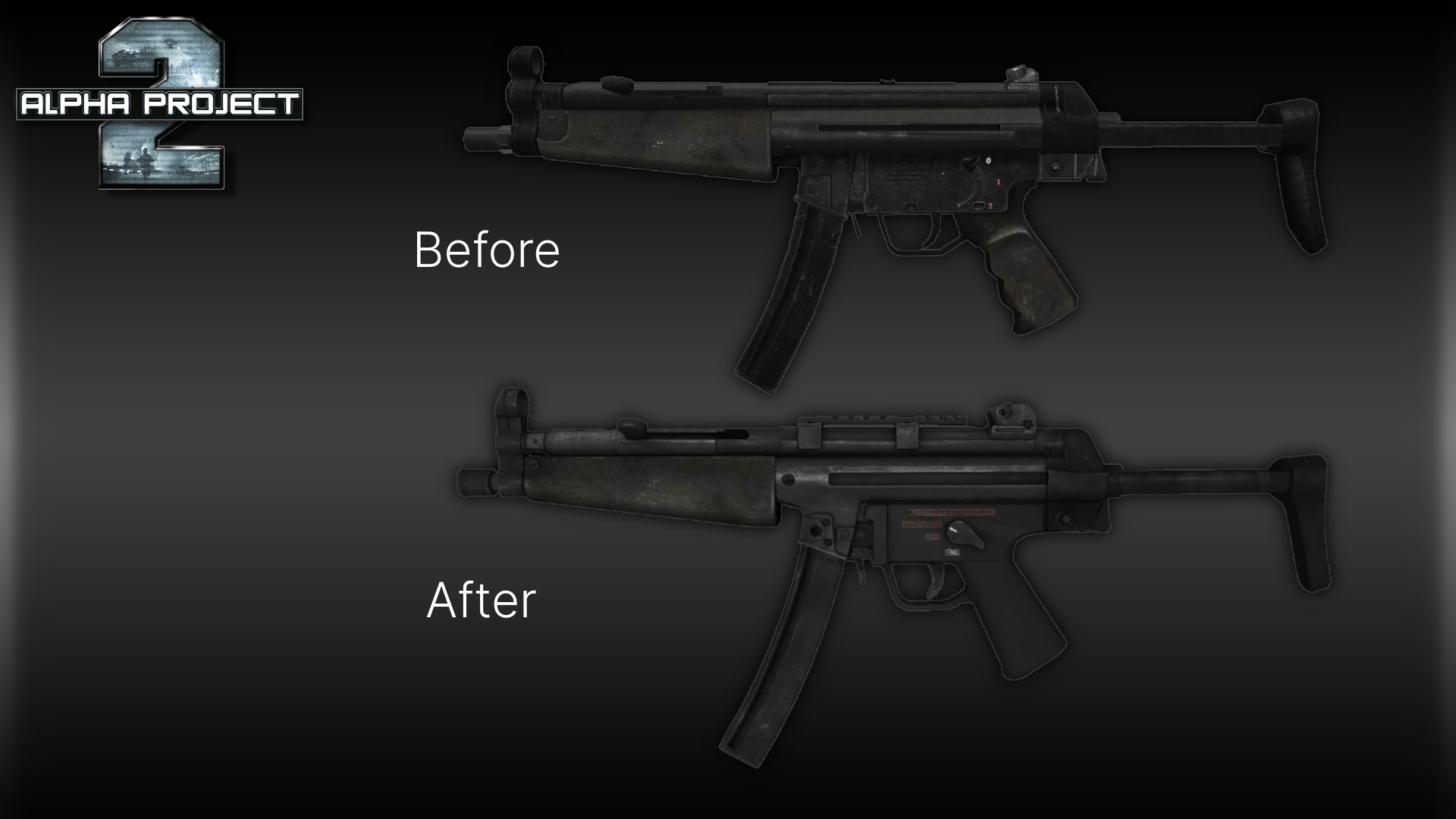 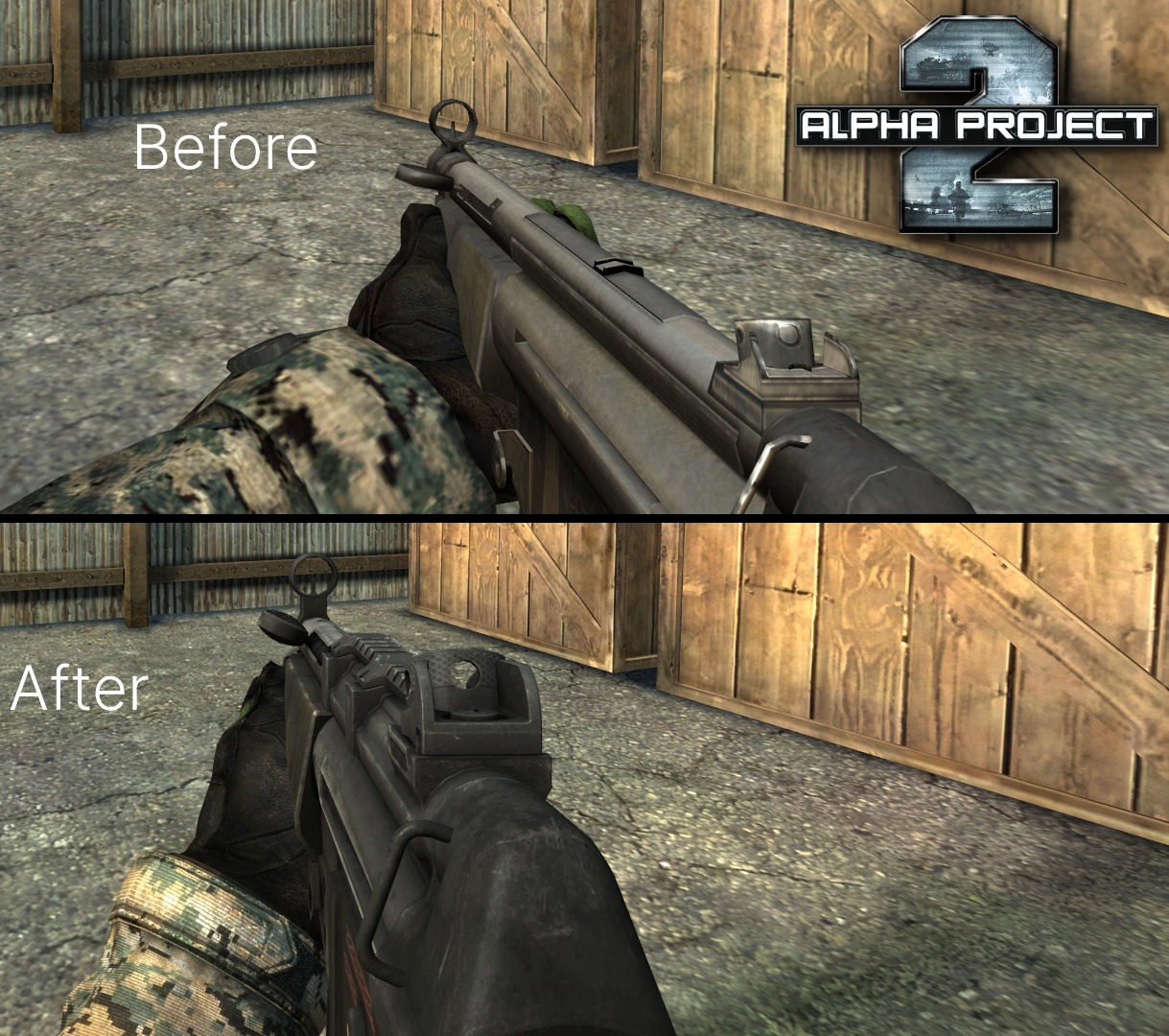 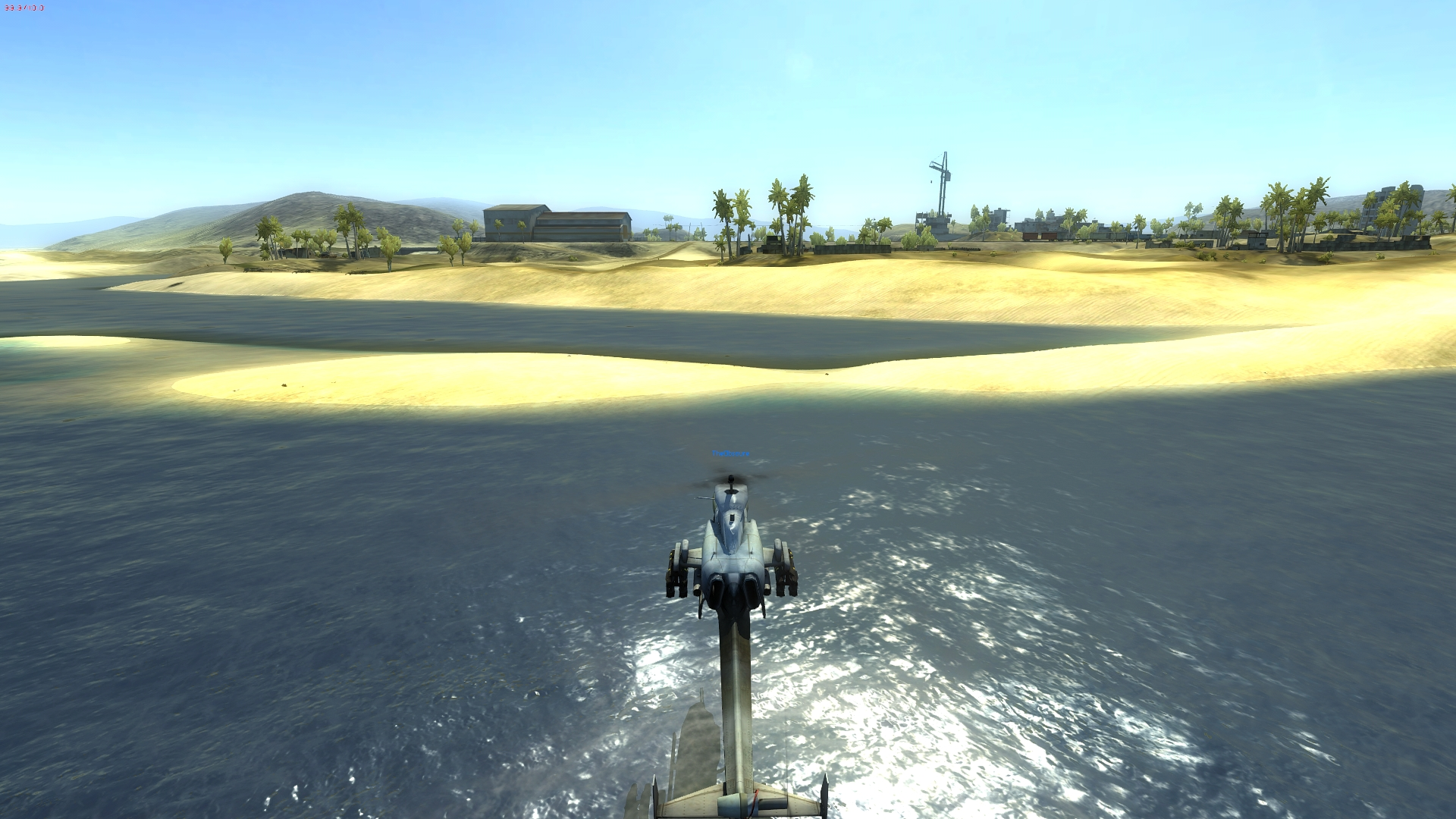 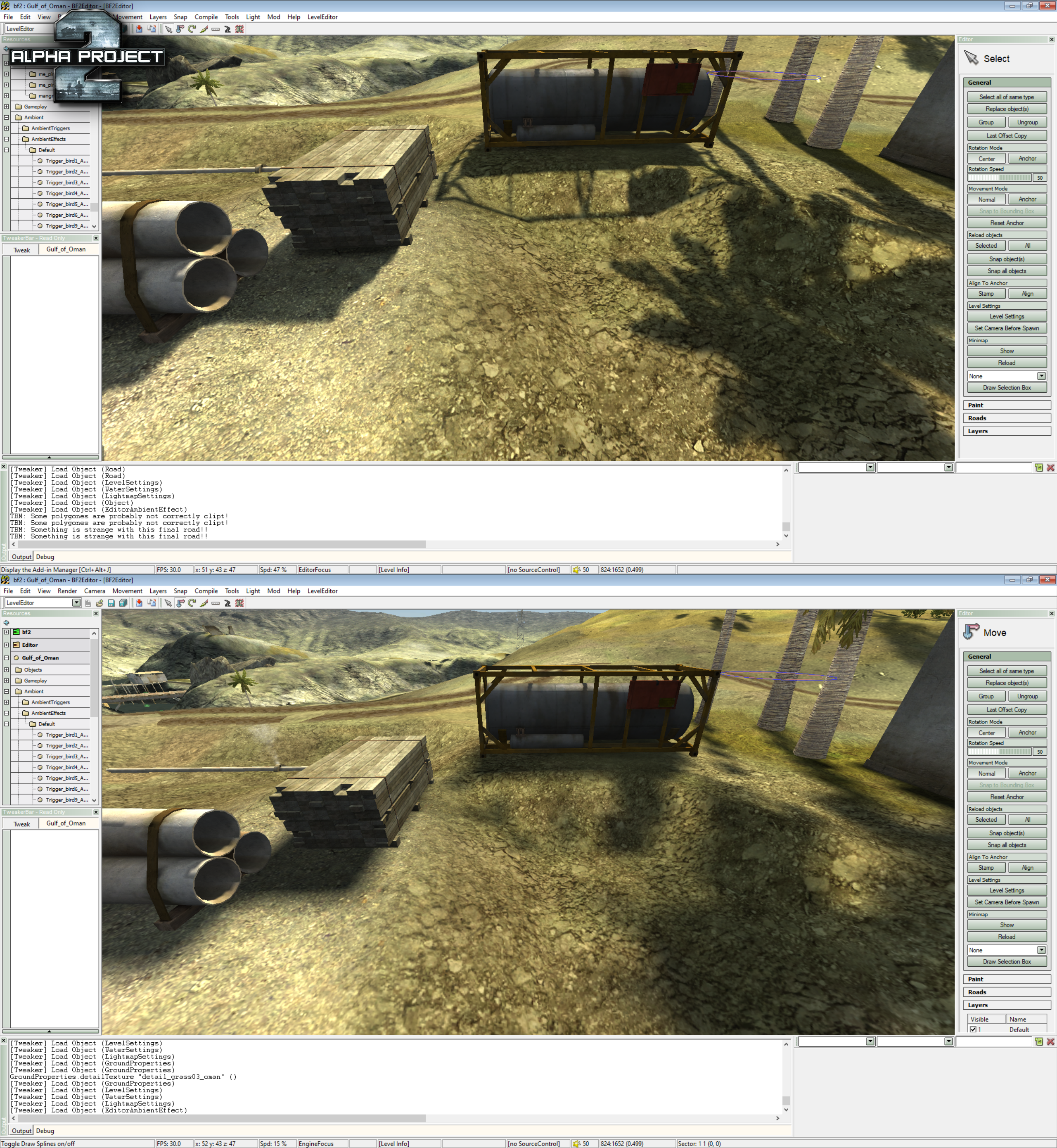 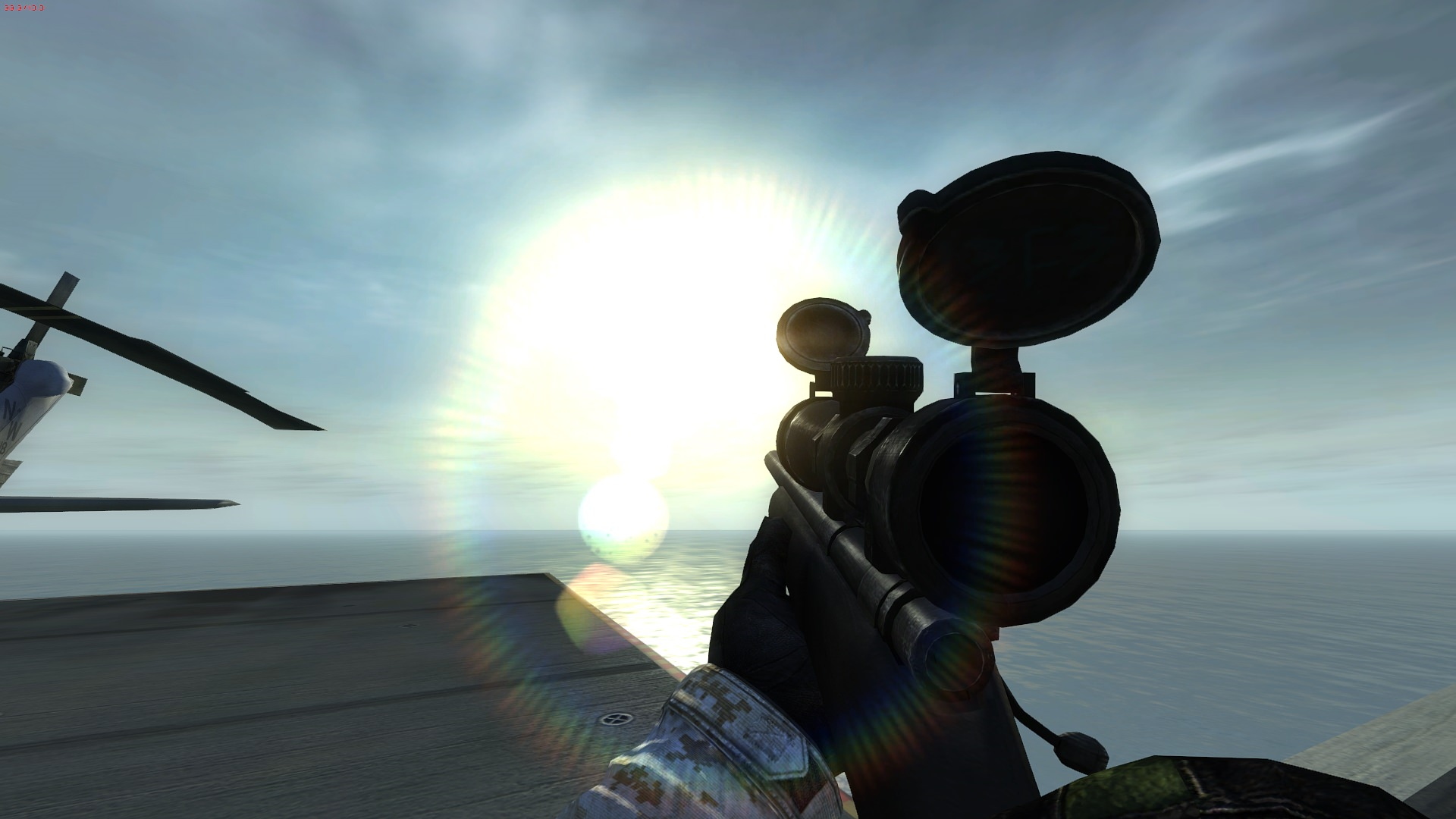 Many more details have been added to maps in the form of added props. Below you will see the recreated alpha version of Gulf of Oman. Please note that these screenshots show footage taken from the BF2 Editor, hence why there might be graphical anomalies like missing shadows on some objects, and other heads-up display elements. 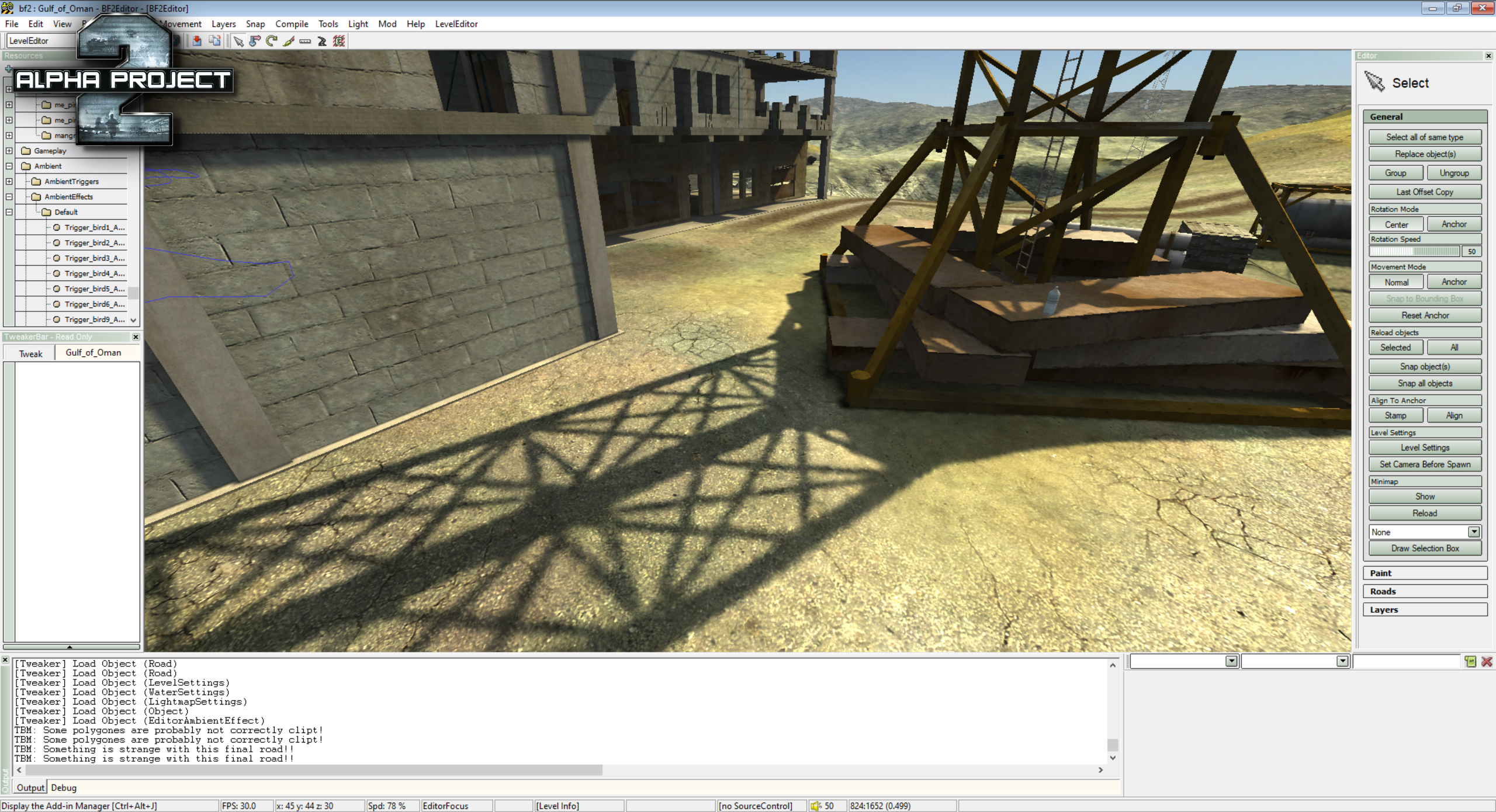 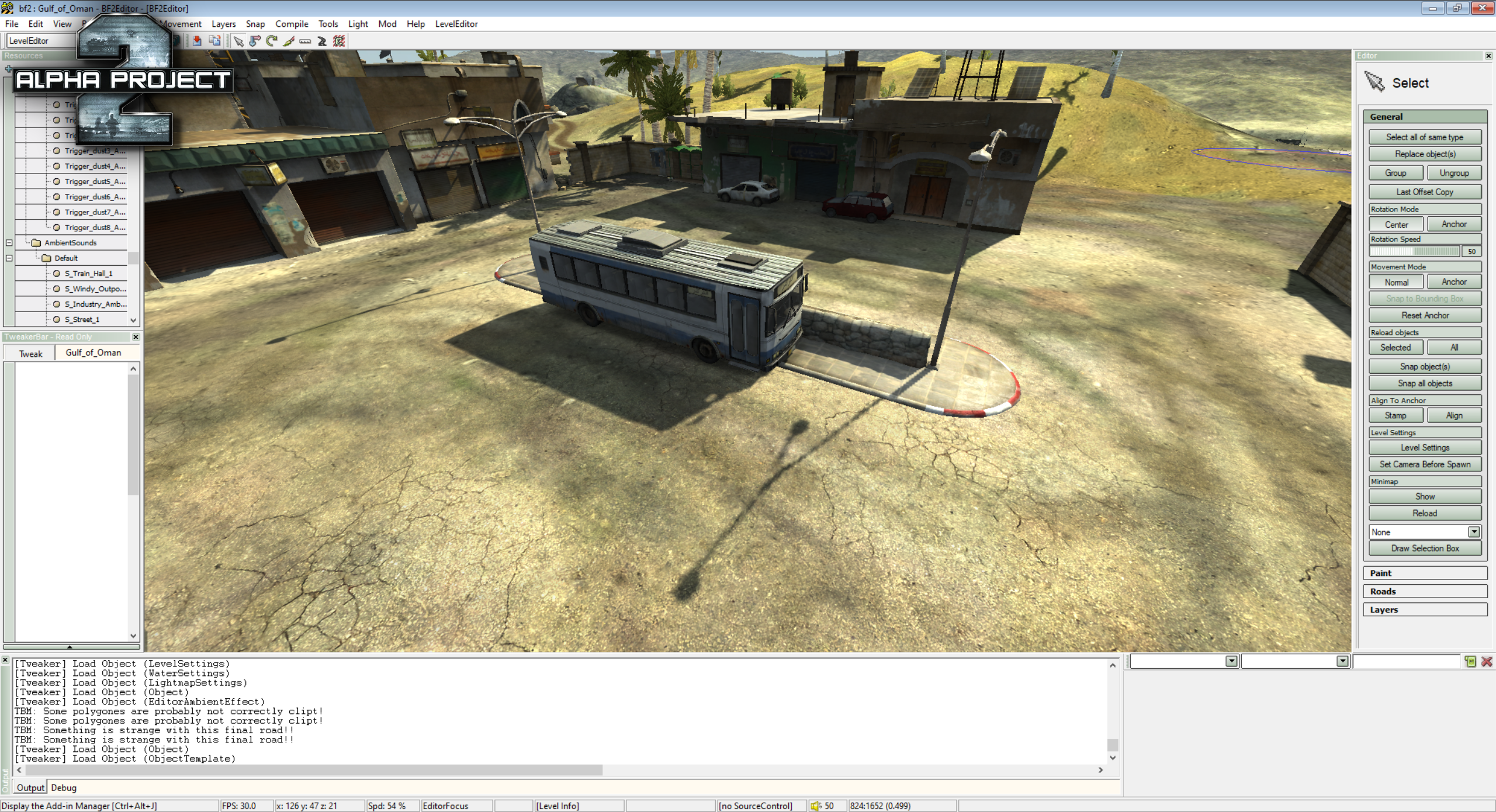 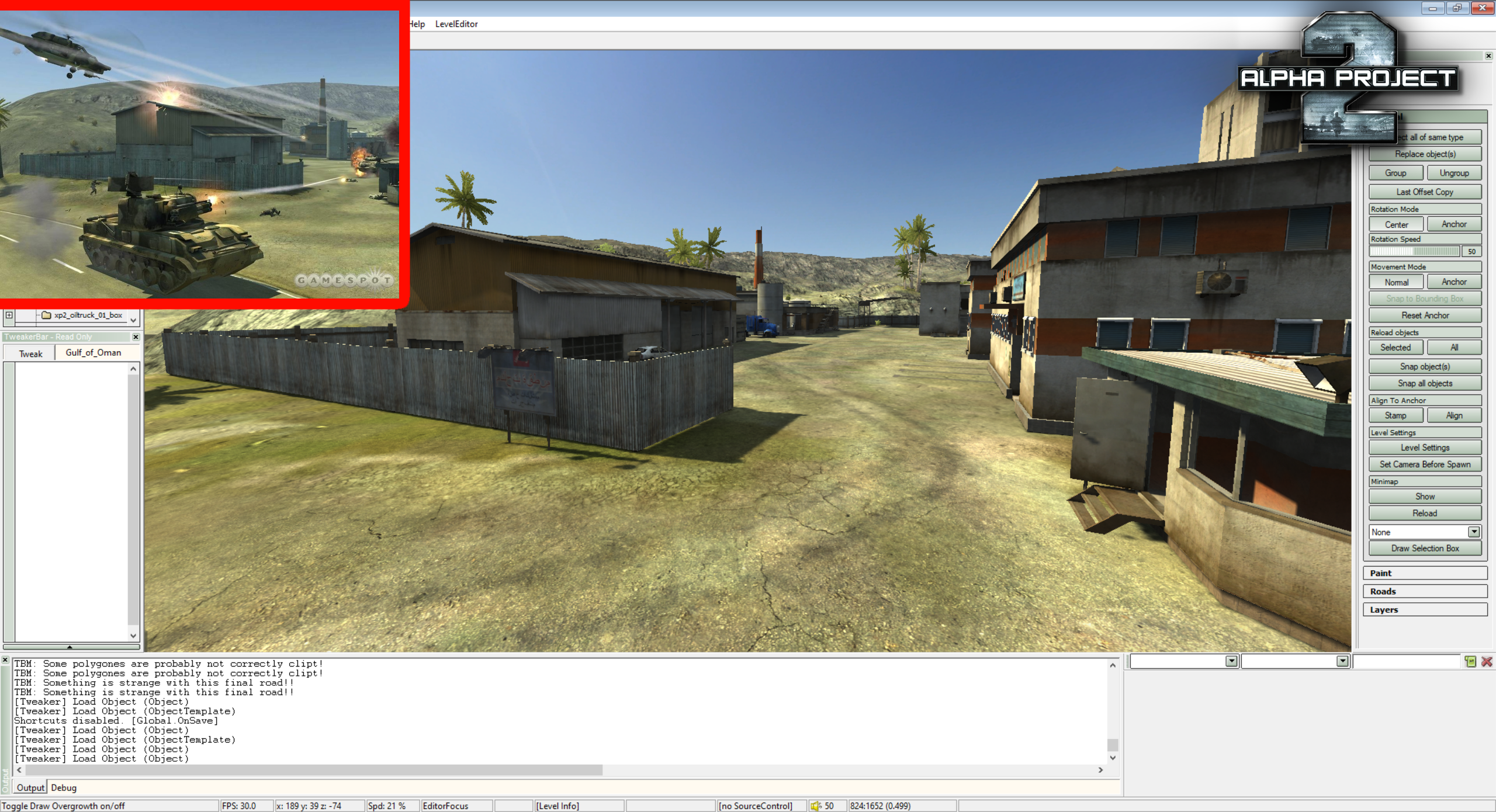 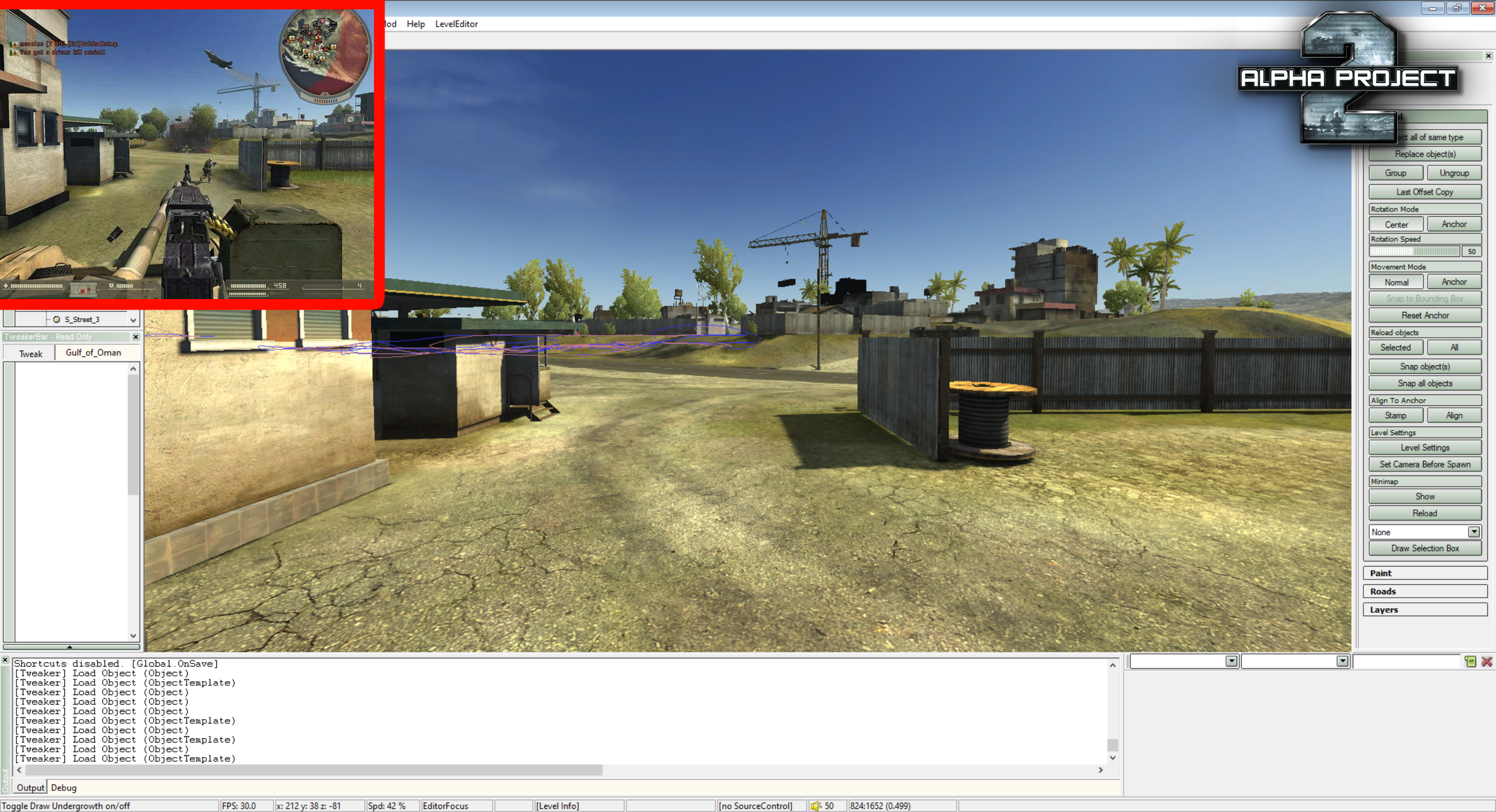 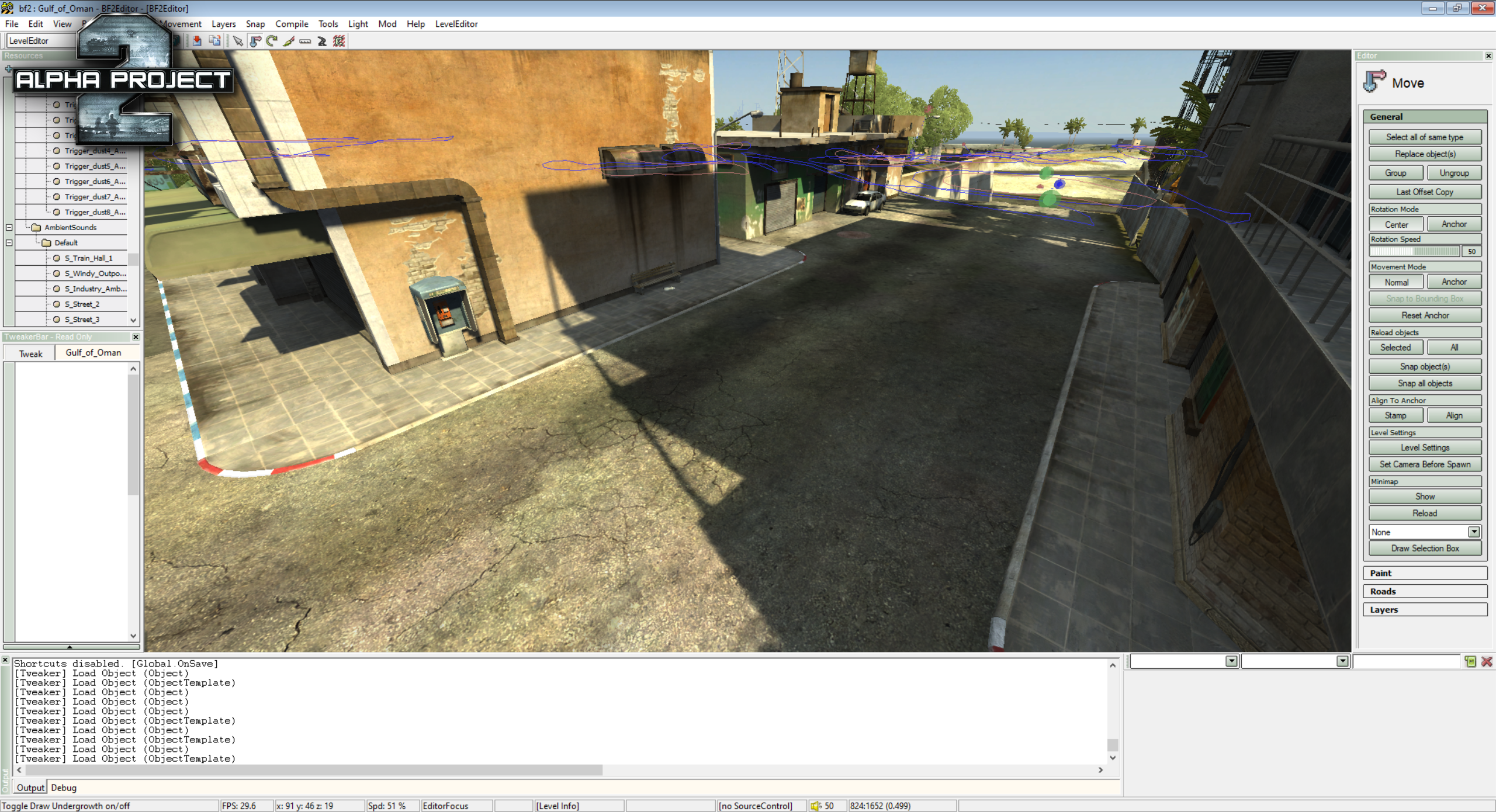 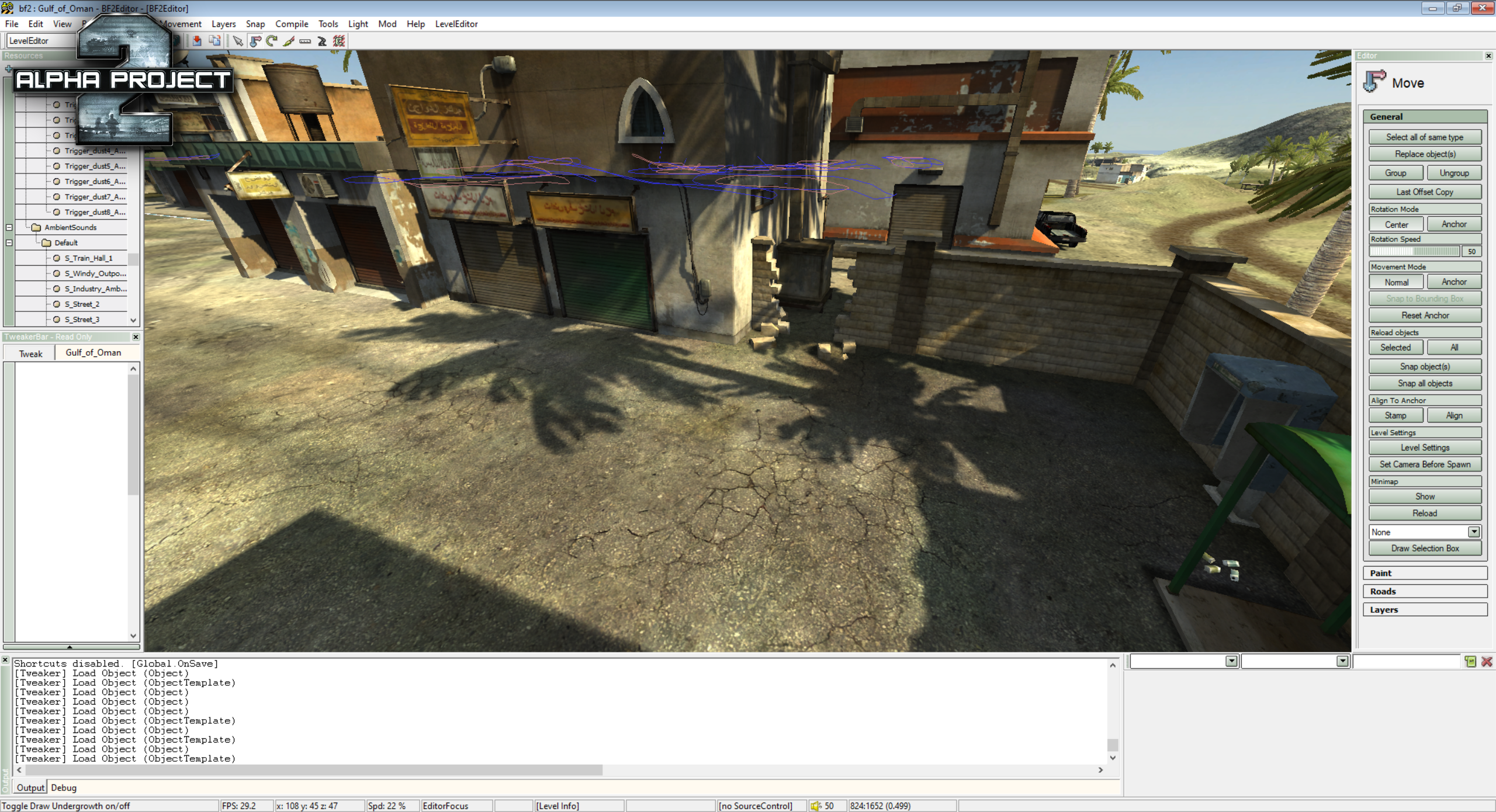 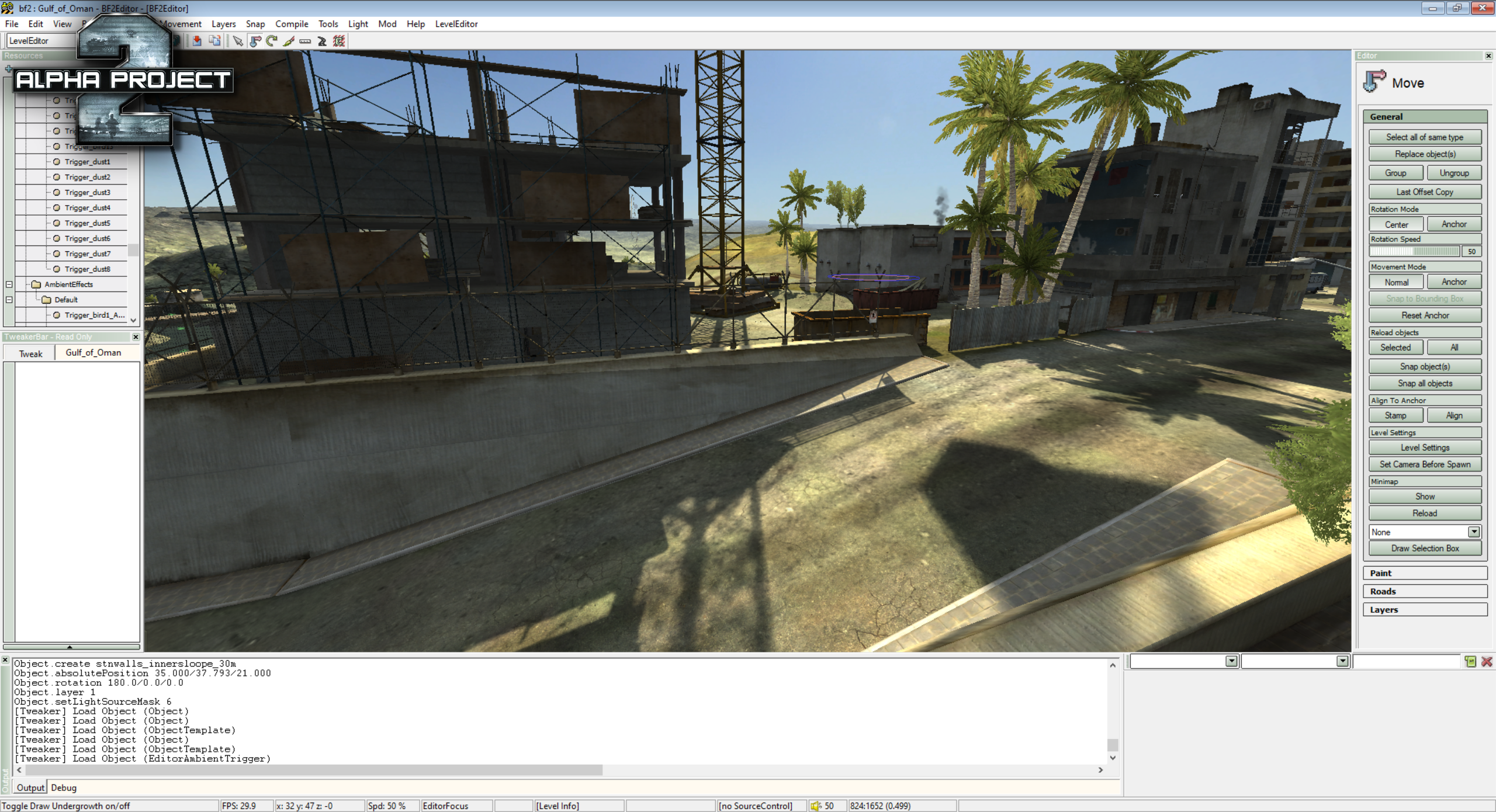 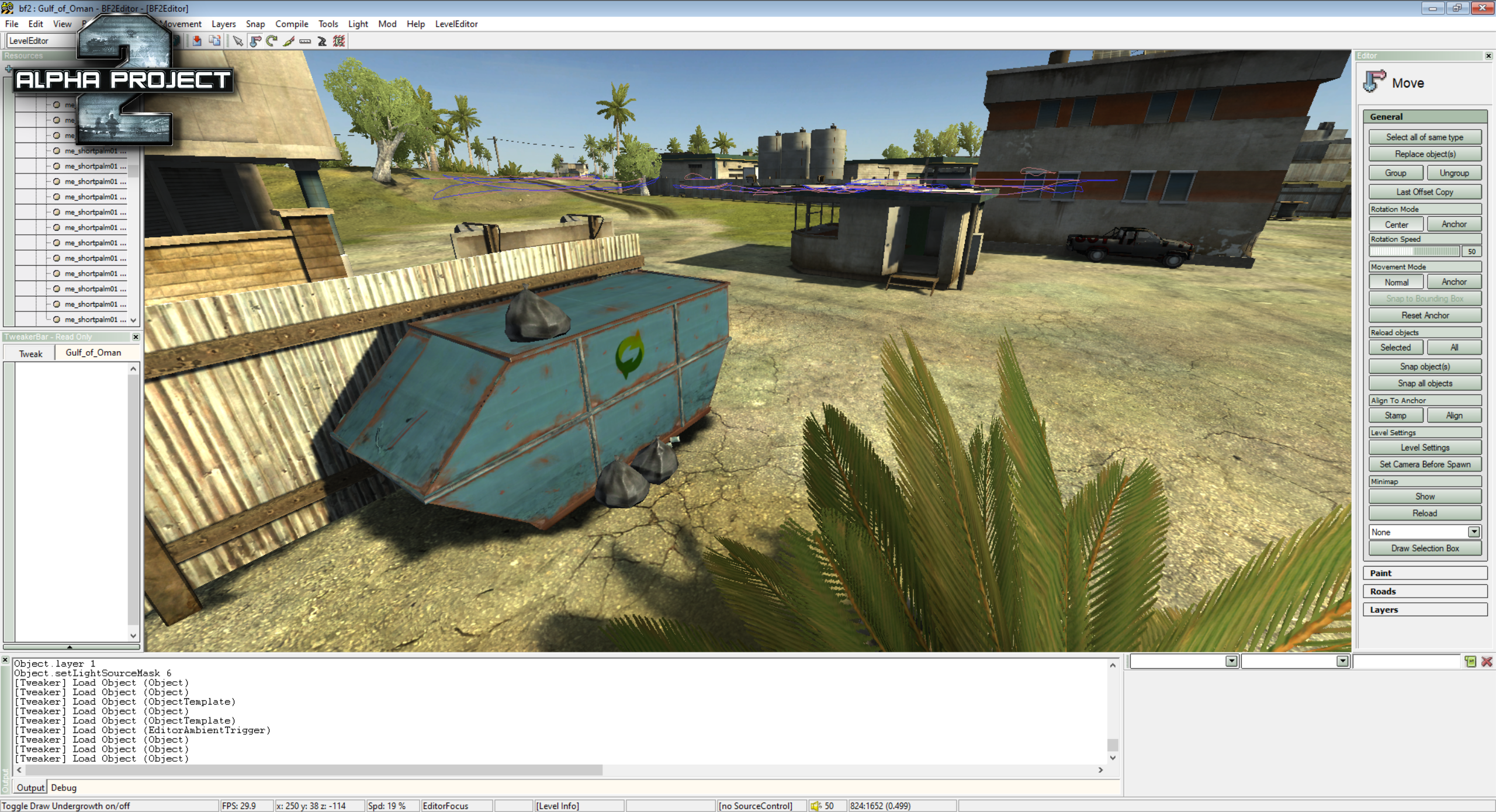 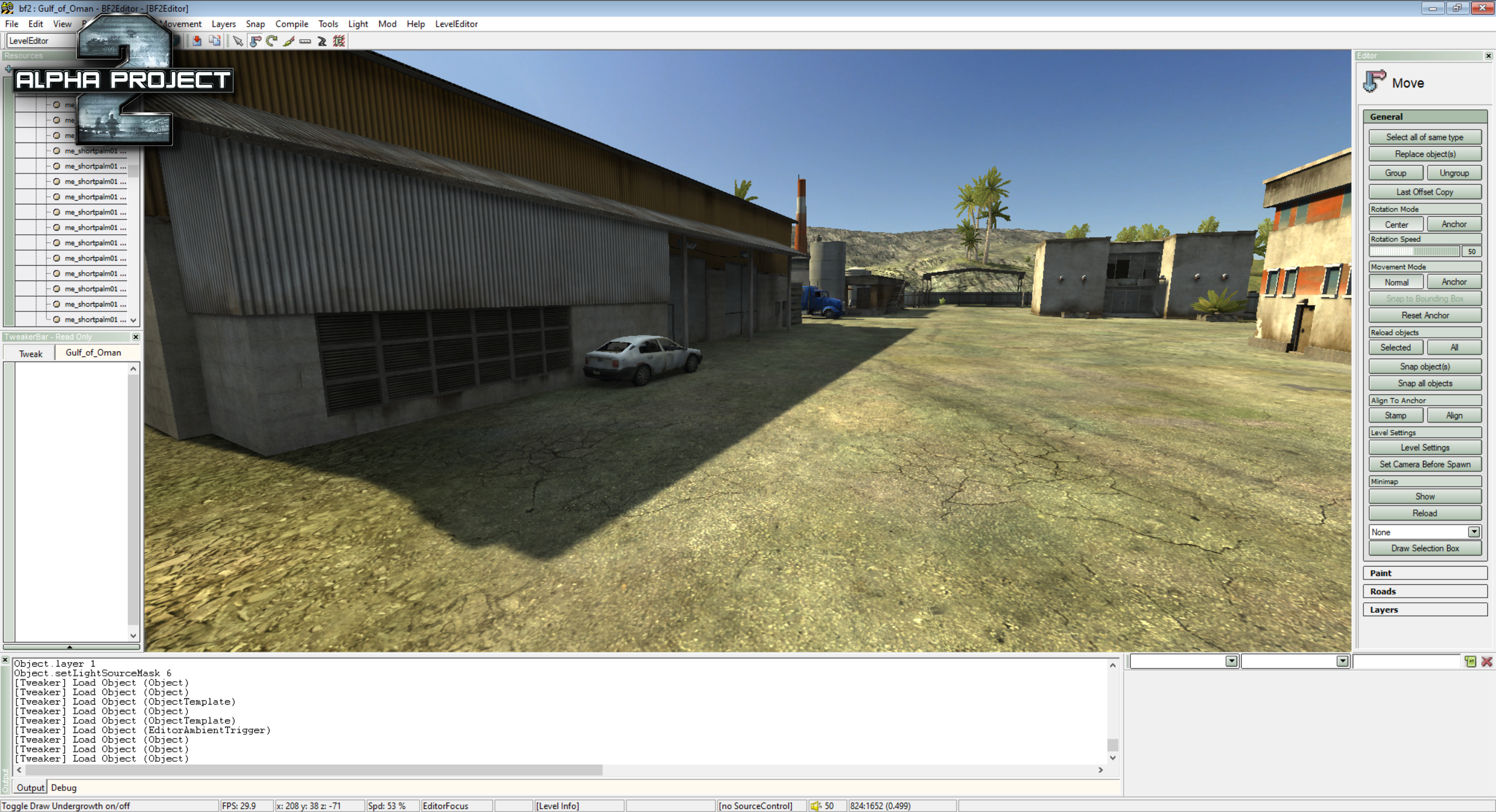 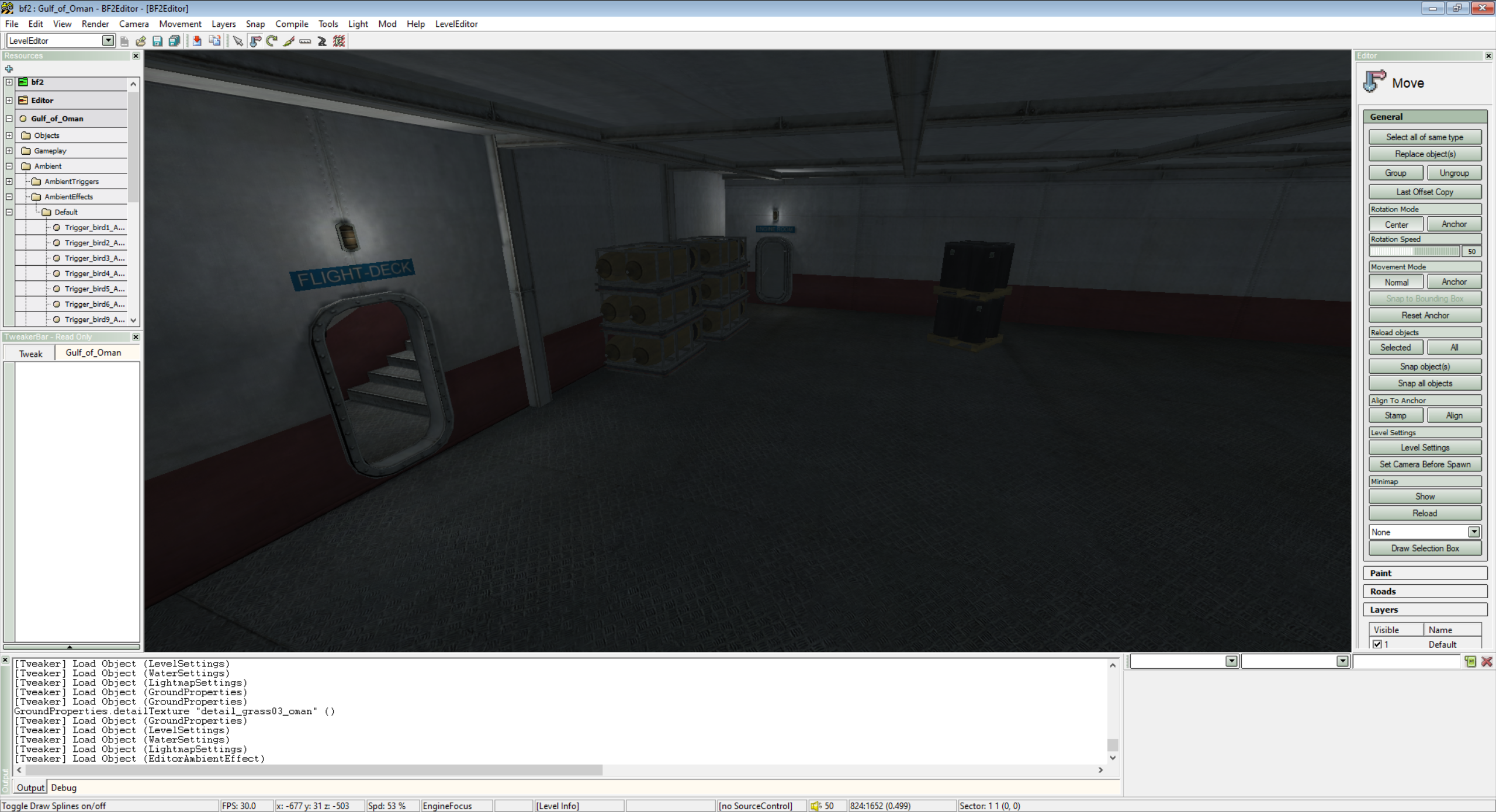 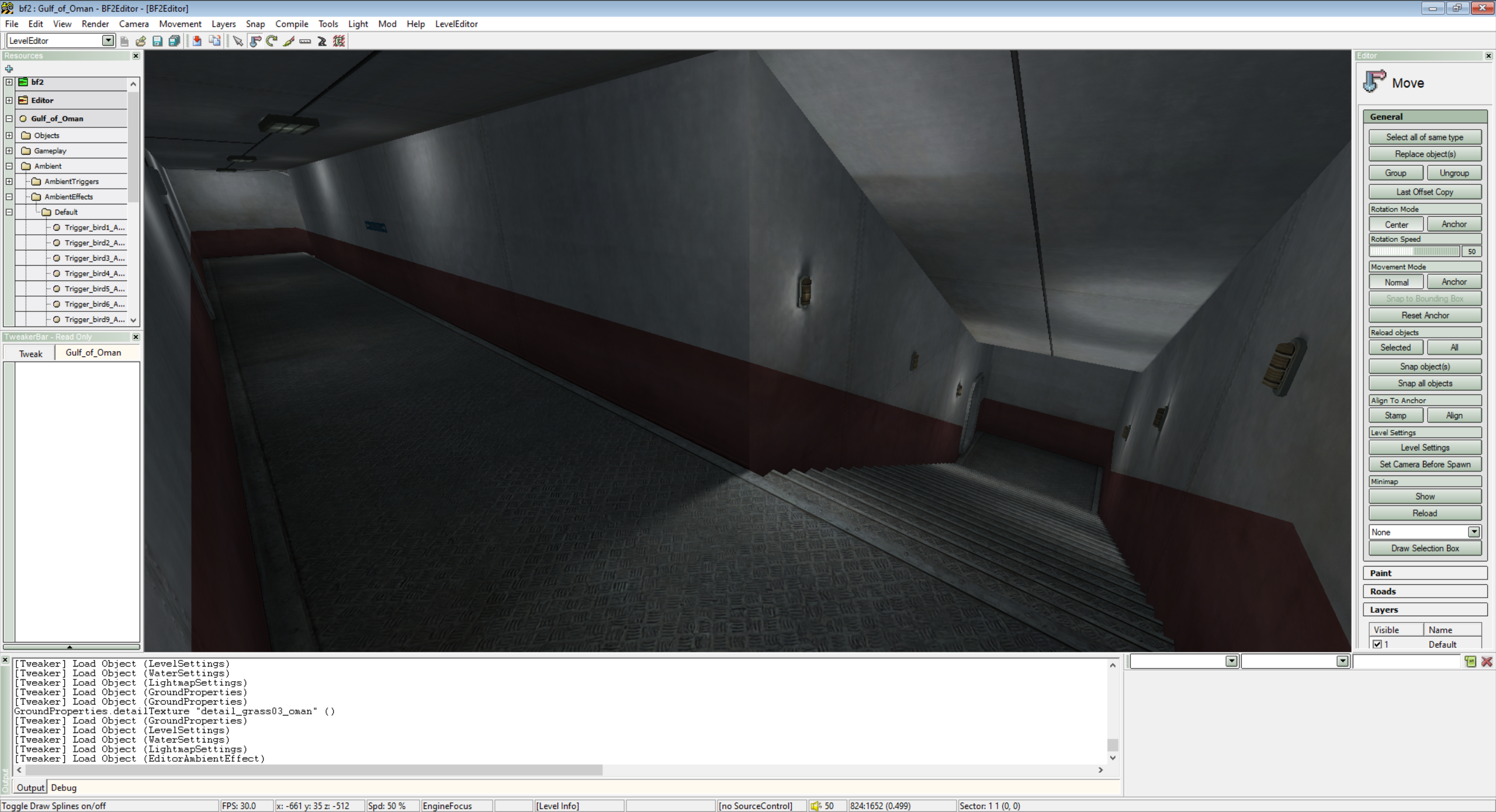 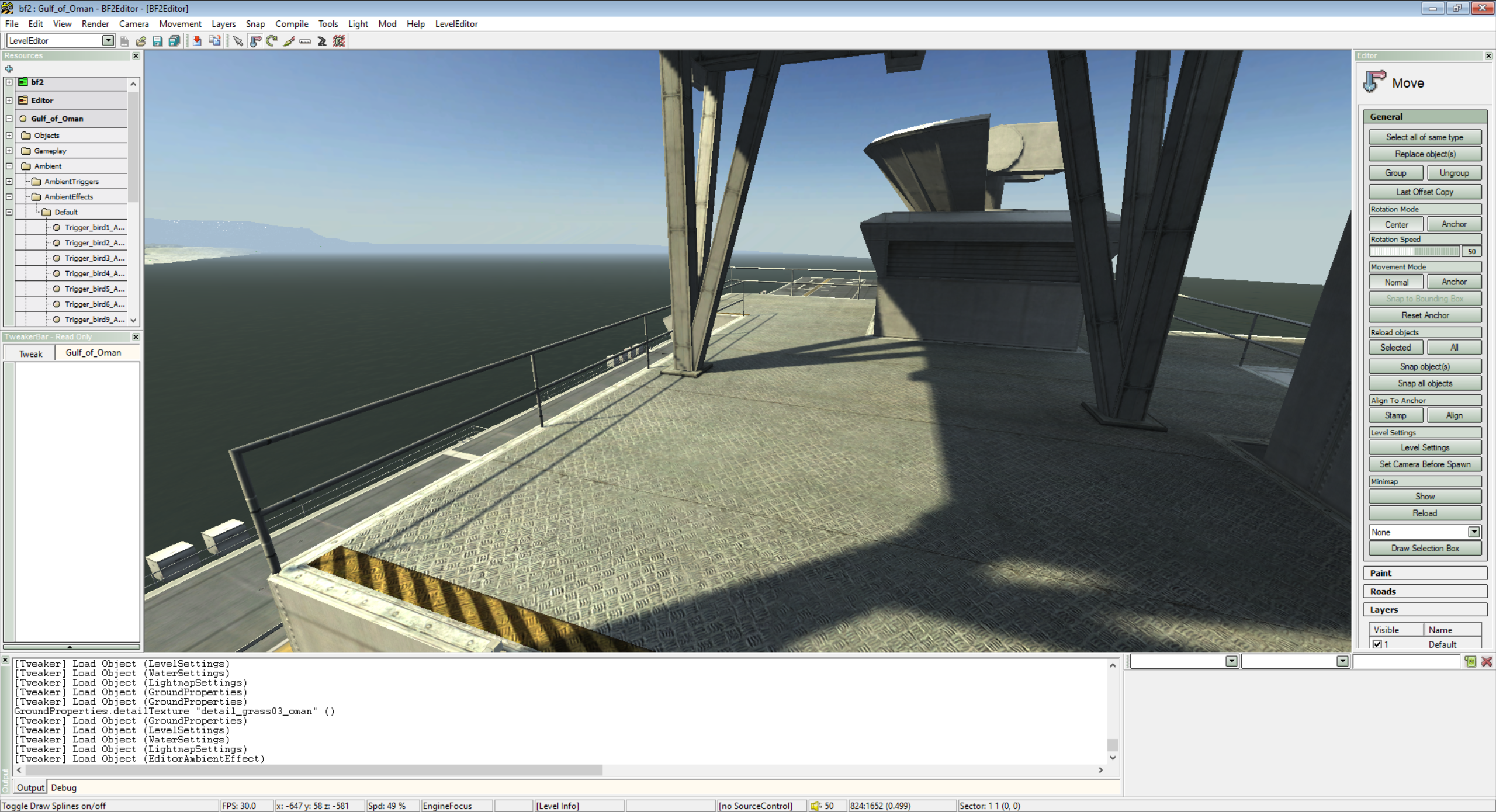 I love to see AP back on the track! Good luck with this major project, it's gotta be difficult but you can do it :))

Thanks for the encouragement mate!

Excellent work, and it's great that the mod is going to be rebuilt, since the last version, crashed quite often. Plus, with the Unlimited Action visuals, it's going to be even better!

Yes, crashing will be reduced to a minimum. I will try to eliminate all crashes if possible. But let's see how far I get. :D

Thanks for the kind words mate!

Thank you. I actually did that work three years ago, but it was kept under wraps the entire time. :)

This is a nice article and update, love your mod, hope you can release this version asap, good continuation ^_^

Thank you! I will try my best to have a release out as soon as I have something done worth putting out. :)

What I really like about AP was the movement and gunplay of the final release, as well as all the cut-inspired content.

I hope to see more of that in your future work. Looking forward to it, best of luck!

I'm making the gunplay a little bit more fluid like it's in BF3 while not taking it far away from the BF2 standard.

All in all, the gunplay is already better mate!

Impressing picture you show from the BF Editor. It is good to know that you don't loose the interest to work on this project. I/We will be ready to play on your release. I am pretty sure. ;)

Unexpected, in a good way!!
I'm looking forward for this project.

Wow some nice updates going into this mod! You can clearly see it is a labor of love for you! Can;t wait to play this when released! Will be great to have a stable version!

Look very promising, keep it up and good luck :)

Hi dude. I'm happy to see that you are still lurking around on this site like me. How are things going?

Finally! I was so excited when I saw the news. Good luck!

To support the Alpha Project, I have found the bugs bellowing:
1. chsht_norinco982_aimpoint_slug zoomLod bug (forgot to add the text ObjectTemplate.zoom.zoomLod 1)
2. usrif_m16a4_l3off_sd (and camo) and usrif_m16a4_l3on_sd (and camo) magLink bug (incorrect weapon name)
3. chmg_qjy88 weapon overheat bug (no weapon overheat)
4. rurif_svu and rurif_svu_closerange changeFovDelay bug
5. jep_nanjing seat bug (forgot to add the text ObjectTemplate.dontClearTeamOnExit 1)
6. Weapon select bug, MEC Engineer AK74U with KOBRA and Chinese Engineer Type95b with aimpoint select bug (forgot to add the weapon sight for engineer in customizationSettings.py)
These are the bugs I have found, hope that could be useful , best wishes!

Thanks for the feedback. The mod is entirely being rebuilt, hence why these bugs are irrelevant.

Again, thanks for trying to help. :)

Excellent stuff! Will the hands on vehicles be included as well as all the cool weather effects the maps had?

After the base maps are in is there any way you can make a separate pack either official or as an addon that brings over custom maps from the community but with AP's changes such as the City of Pain and City Park maps I mentioned to name a couple?

Since I am using new hands and arms meshes, I will not prioritise this feature. There is a better system created by Badsanta12345 however I don't think he is around anymore to help me implement it. For now the first release won't have the vehicle hands.

Good job, keep it up! Is JONES still around or..

Nope, so far I am the only developer that has returned... or rather never left, I guess.

Amazing news, was disappointed to see it reaches it's end of life back in 2015. Glad to see it back on track! Bit of a shame to see Unlimited Action shelved, really enjoyed the gameplay of that mod. Will be following the development of this revived version :)

I don't think I will can that mod just yet. Instead I will try to wrap up a release, however it is too early to tell.

On the other hand, should I shelf BF2:UA, the Alpha Project reboot has essentially the same gameplay if not better, so at the end of the day the folks here will get an improved experience either way. :)

I was working with JONES on Alpha Project for a long time mostly as the 3d Exporter and vehicle coder. I've been interested in getting back into BF2 and was looking at learning Unity by converting assets over and implementing mechanics from BF2. I can't offer too much time but if you'd like, I can do a bit of 3D Exporting and basic modelling over the next few weeks. Alpha Project was really a fun project to work on!

I don't use xfire anymore hahahaha so ModDB is the way to go!

This is great news!

I'd call Alpha Project one of 5 best BF2 mods ever, but I always forget it exists because every time I played it my experience was mared by random crashes, and made me quit playing it, and uninstalling it. I hope your revival will do great, all the best man.

There are many fans of this mod in China, and it’s really great to hear this news!

Chinese players are looking forward to this mod, come on.

Will weapon customization still be around in this revival? Definitely my favorite part of the mod.