Posted by EleonGameStudios on May 10th, 2017

Good news: We are nearing completion of the Empyrion Alpha 6.0 development cycle! As of today, we are officially feature complete for the upcoming version. :)

What does it mean? No big additions, no big changes, but bug fixing, small refinements, feature polishing and even more bug fixing!

That’s also why we release this update with the special remark for everyone to pay close attention to the overall functionality of the newly introduced features as well as bugs that are related to those features.

Feature changes (like RCS and Max Speed for CV) and larger updates on functionality, based on your feedback, will be a topic of the version 6.x schedules, as those would inevitably push back the go live of 6.0 even more. Thanks for your understanding.

Said that, and given everything goes according to plan, we expect the full public release to hit end of May! The exact date will be announced in due time.

Workshop Scenarios can now be set to visible:
Last but not least, a final note regarding the Steam Workshop - Scenarios: Everyone who has already uploaded a scenario to the Steam Workshop is now welcome to set his/her scenario to “visible”. However, please temporarily add (EXPERIMENTAL) in brackets behind the scenario name until public release in order to make it clear that downloading a scenario is only for players on the experimental branch. We are looking forward to seeing your scenario creations.

Now please enjoy the latest experimental version - and send us your feedback about the questions asked in the changelog below! 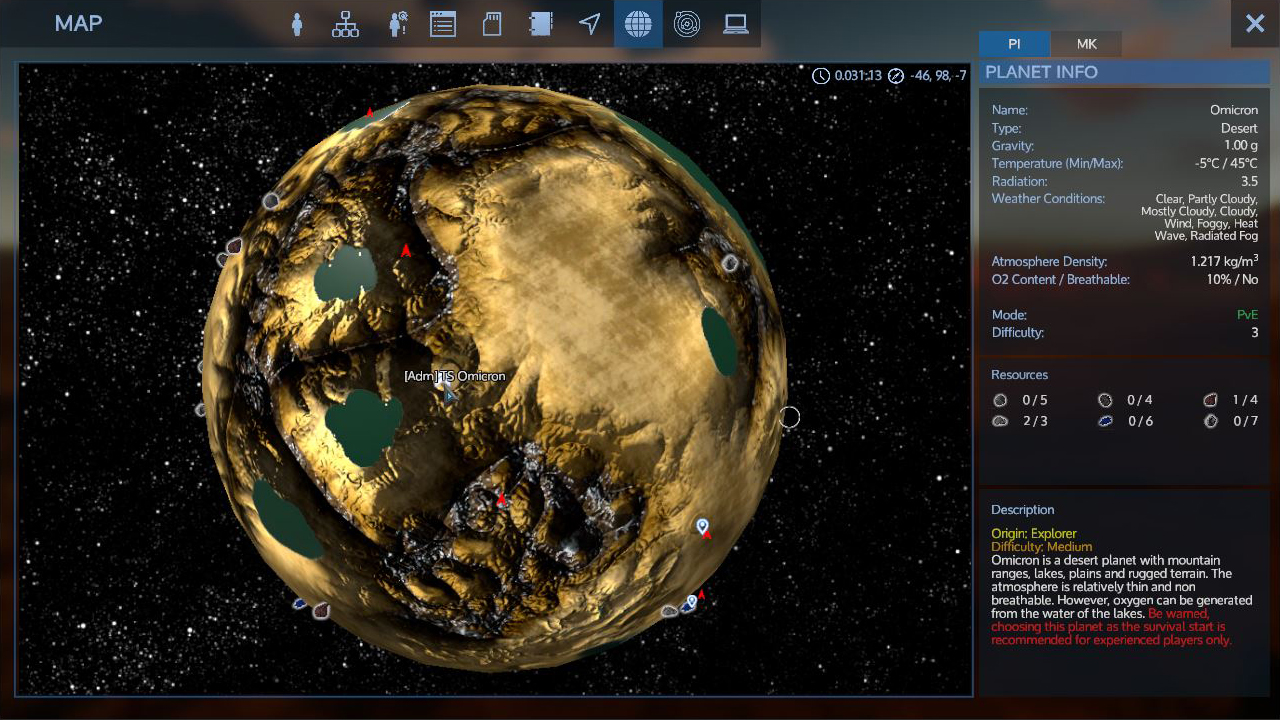 We have now much more control over the distribution of POIs / resource - for example we can now ensure that there is no enemy POI in shooting distance to the trading station. 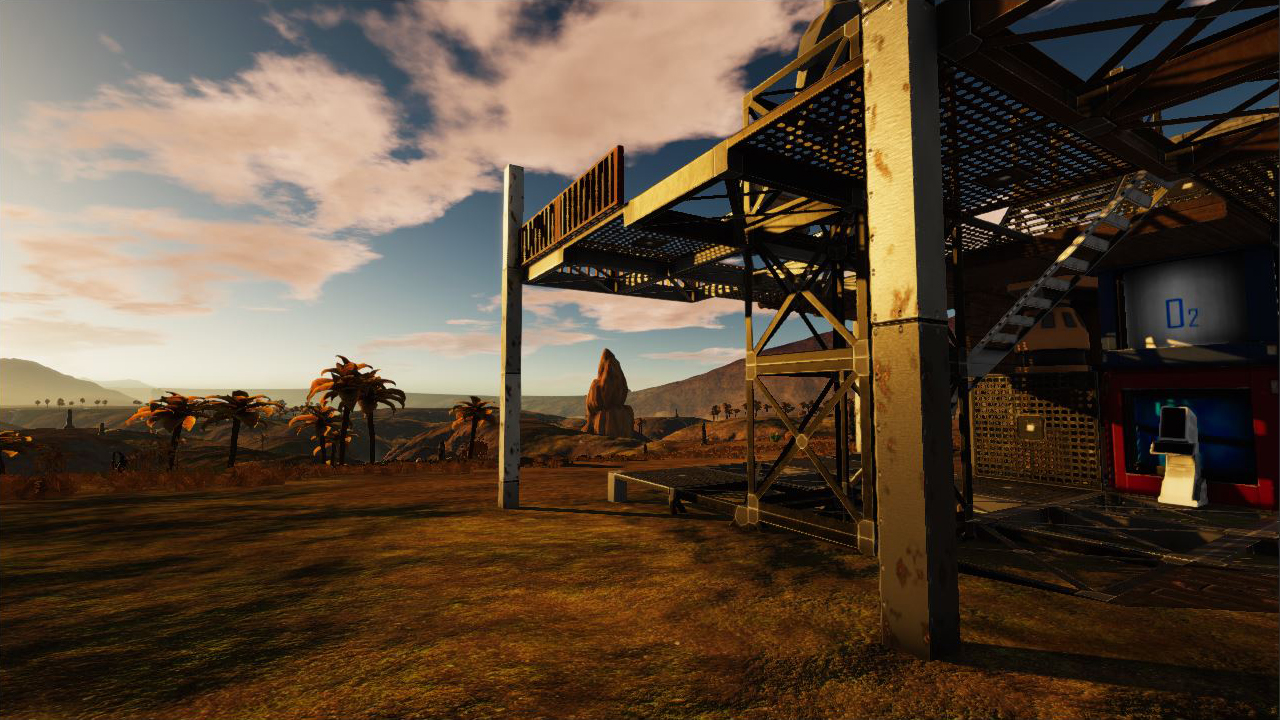 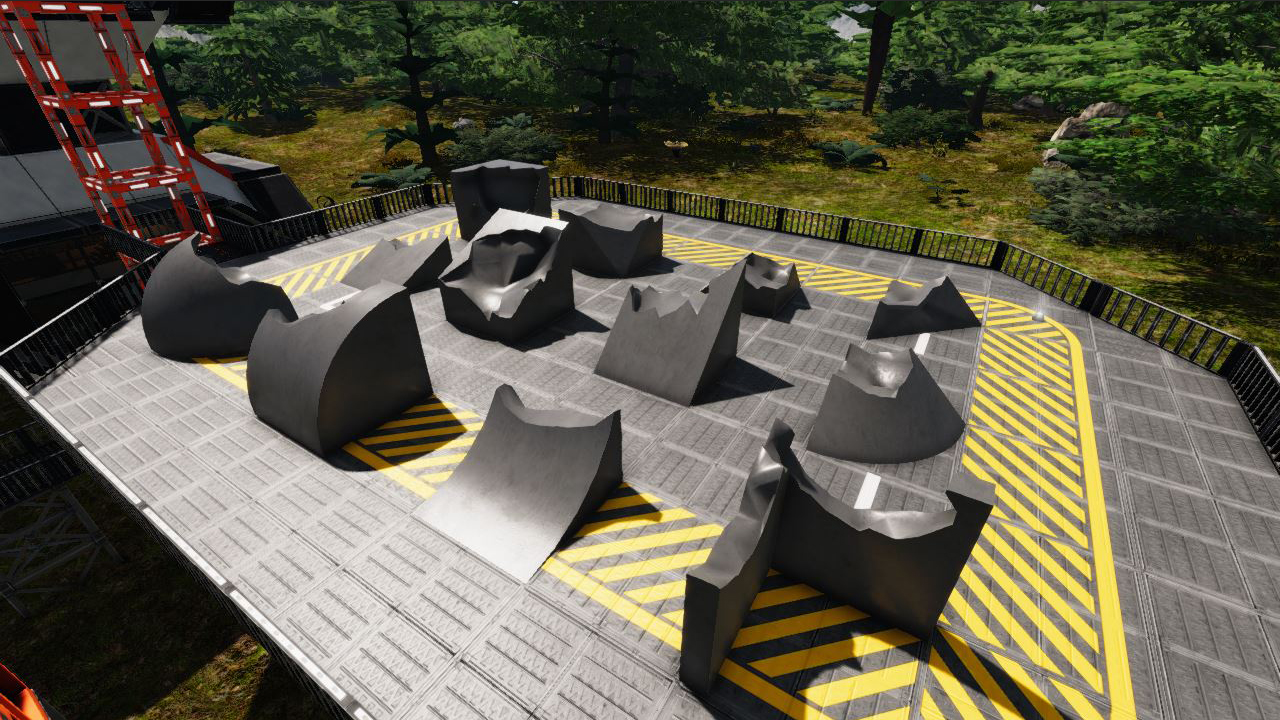 There are more destroyed hull blocks in the game waiting for you. 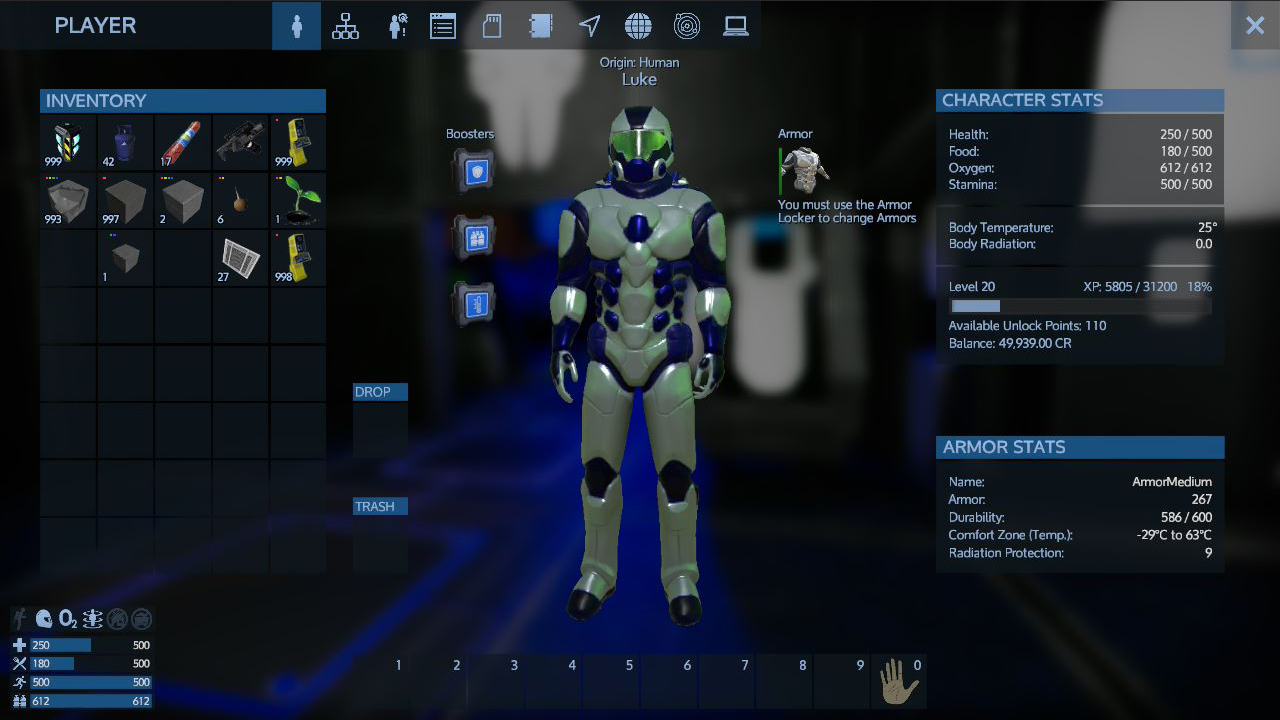 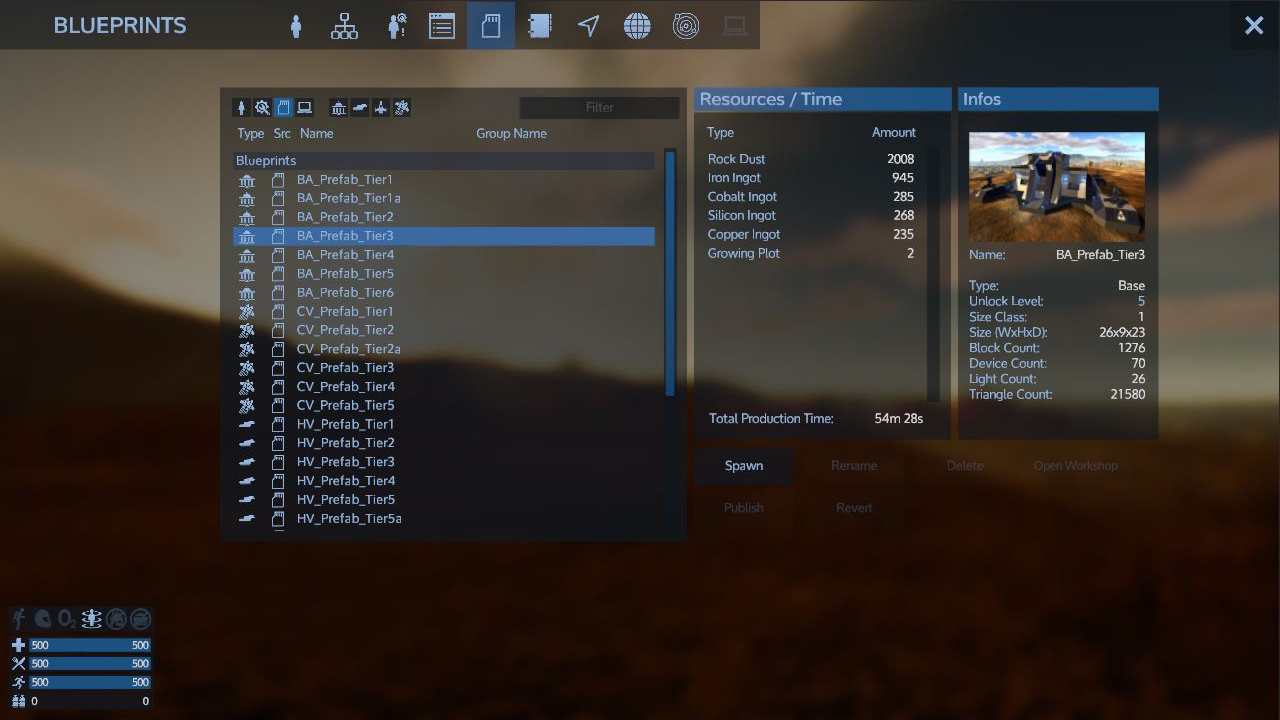 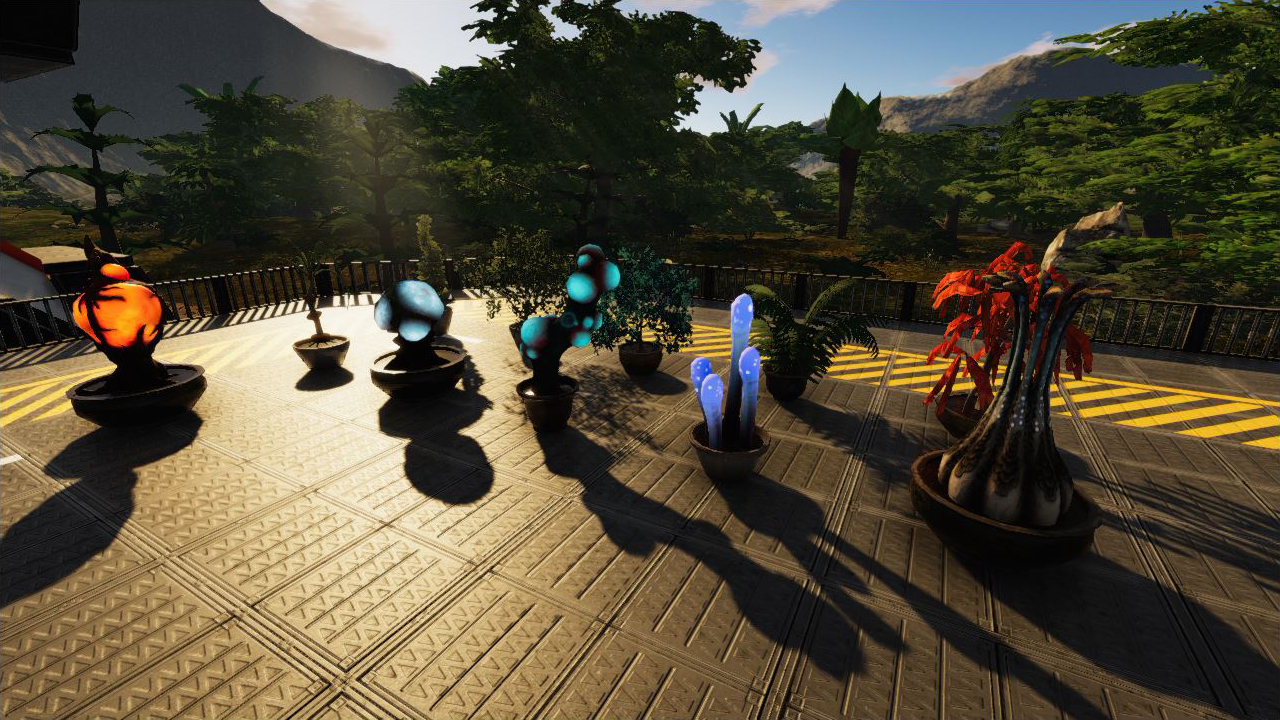 Gameplay and Rebalancing:
- De-activated max speed limit of vessels
- When spawning a not powered blueprint, the default inside temperature is now 22° and adjusts slowly to the outside temp
- Structures: temperature towards 22° still rises with 1° per second, towards other temperatures with 0.5° per second
- Added durability to all weapons and some tools
- Increased damage inflicted by NPCs between 20% and 50% (note: in easy difficulty settings, drones did not cause any damage to player when wearing medium armor)
- Sentry turret is now craftable in Survival Constructor

Bug Fixes:
- Fixed: Lagshots - Please let us know if you still find use cases where it is not fixed
- Fixed: Custom Groups / Signals (MAIN tab) do not save with blueprint
- Fixed: Not possible to remove abandoned signals from device
- Fixed: Signal logic name can not be recycled, leads to broken circuits
- Fixed: Not possible to trigger multiple explosive blocks with one signal
- Fixed: A published blueprint that has been deleted in the Steam Workshop or published via another Steam account can now be renamed. This will remove the workshop link and thus, a warning is displayed.
- Fixed: NPC walking animation issues in trading stations.
- Fixed: Plants die instantly in a BA although conditions are met.
- Fixed: Planet Vessels are attacking structures even if no player is nearby
- Fixed: Planet vessels are flying on top of player base and "park" there
- Fixed: AI Vessel gets stuck at own base if base is too high
- Fixed: Sometimes player vessel has a strange position on vessel base
- Fixed: Issue with setting waypoints when leaving the game & reloading
- Fixed: The green Durability bar is sometimes different between Player inventory & Armor locker.
- Fixed: Problem with durability bar of weapons not updating correctly
- Fixed: Plants that are in harvest stage disappear instead of transforming into dead plant when dying
- Fixed: Traders always respawn on new entry of a TS (they fall through the world)
- Fixed: CoQ when overwriting internal or stock Blueprints (deactivate EAC when dealing with those Blueprints)
- Fixed: De-constructing HV Jet thruster gives back a M-Thruster
- Fixed: Issue with Drone bases & AI PV landing/spawn pad.
- Fixed: Patrol-Drone Sound can be heard over the whole playfield
- Fixed: MAIN tab switches for O2 and Power are sometimes not reflecting current setting
- Fixed: Possible to set HOME button on every base and vessel
- Fixed: HOME feature does not work anymore
- Fixed: Two planet vessel bases are spawned on each planet
- Fixed: Exiting any storage containers in the devices Tab always exit to the Main tab.
- Fixed: Creating a logic circuit or renaming an output signal needs to close & reopen CP to make the new signal name available for devices
- Fixed: Not possible to move device to an auto-group
- Fixed: "Black Hole" look to sun in Sector Map
- Fixed: Control Panel signals (Main tab) do not save with blueprint
- Fixed: Error linked to sector map circles (world unload bug)
- Fixed: Issue with warping & leaving atmospheres
- Fixed internal problem with turrets
- Fixed: PDA shows Tutorial tab even if there exists no tutorial
- Fixed: PDA menu: Action descriptions not visible when opening menu window the 2nd time
- Fixed: PDA: Reward count checks actual limit for specified item
- Fixed: LCD text size can not be set back to 7
- Fixed: LCD text size info wrong
- Fixed: Problem with Instance Playfield on Sector Map
- Fixed: PDA: Check 'NearUnit' needs to also work for Traders
- Fixed: Sometimes Minigun drones don't deal any damage to the player.
- Fixed: CoQ when exiting Set waypoint window
- Fixed: Error in Marketplace
- Fixed: Color on Sector Map Planet Selection
- Fixed: Random Coq when starting a new survival on Masperon
- Fixed: Random CoQ when starting FRESH