Posted by EleonGameStudios on Apr 25th, 2017 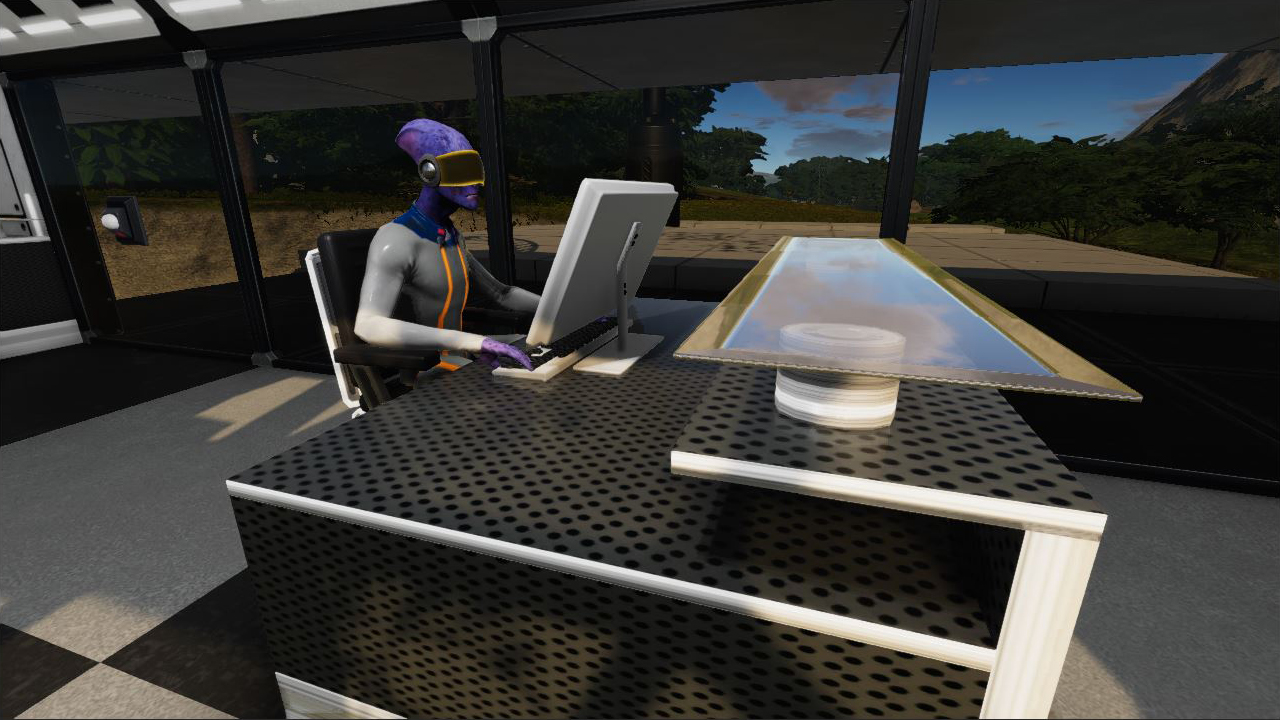 Welcome back on our road to Alpha 6. With Part IV we added an all new feature: We implemented scenarios to the Steam Workshop!

This is might sound like a small addition, but it is quite a major stepping stone: We had the possibility to create and share save games and scenarios before, but now everyone can share and play them with just a few clicks!

With the game becoming as customizable as never before (and with something fancy still in the pipeline), we are looking forward to the creative community to unleash their imagination with the upcoming Alpha 6! Maybe, as with blueprints, some of your scenarios might find their way into the official version in a future update! ;-)

Just as a side note for our creators: Feel free to start creating scenarios right now. But, when uploading a new scenario to the Workshop, please make sure that you set the visibility to Private until Alpha 6 is publicly released.

Important in this context: We also released a fix for the workshop problem - please test uploading / subscribing of Blueprints and Scenarios to make sure everything works fine now.

We are of course not only working on the customizability of the worlds of Empyrion, we also added a few nice features in Part IV: New logic gates, devices-markers for your HUD, the first part of our new Control Panel (Quick Access Page), Night Vision, a set of friendly NPCs, a command to reload a playfield (for testing changes made in the .yaml) and more!

What’s left on our list? Quite some work, to be honest. The feature-todos are shrinking and as you can read from the changelog, we already started with bug fixing and balancing, but given the complexity of the features we add with Alpha 6 and based on the feedback we got internally and while reading through the feedback of the Experimental versions, we decided to NOT rush Alpha 6 with Phase IV, but give us more time to finish the work as intended.

For everyone waiting to have a date for a public release right now, this might be bad news to have at least one Experimental stage still lying ahead of us, but no one likes to play around with broken stuff and waiting for the next major version, right?

We hope you enjoy Empyrion Experimental Alpha 6.0 Part IV and are looking forward to see even more valuable feedback on the topics of Alpha 6 in the forums, to make this major update awesome! :)


KNOWN ISSUES:
- Please do not use the new NPC spawner blocks (Plate and Block) yet. The NPCs currently spawn below them. However, you can use the old NPC spawner (Pad) instead - this one is working fine. 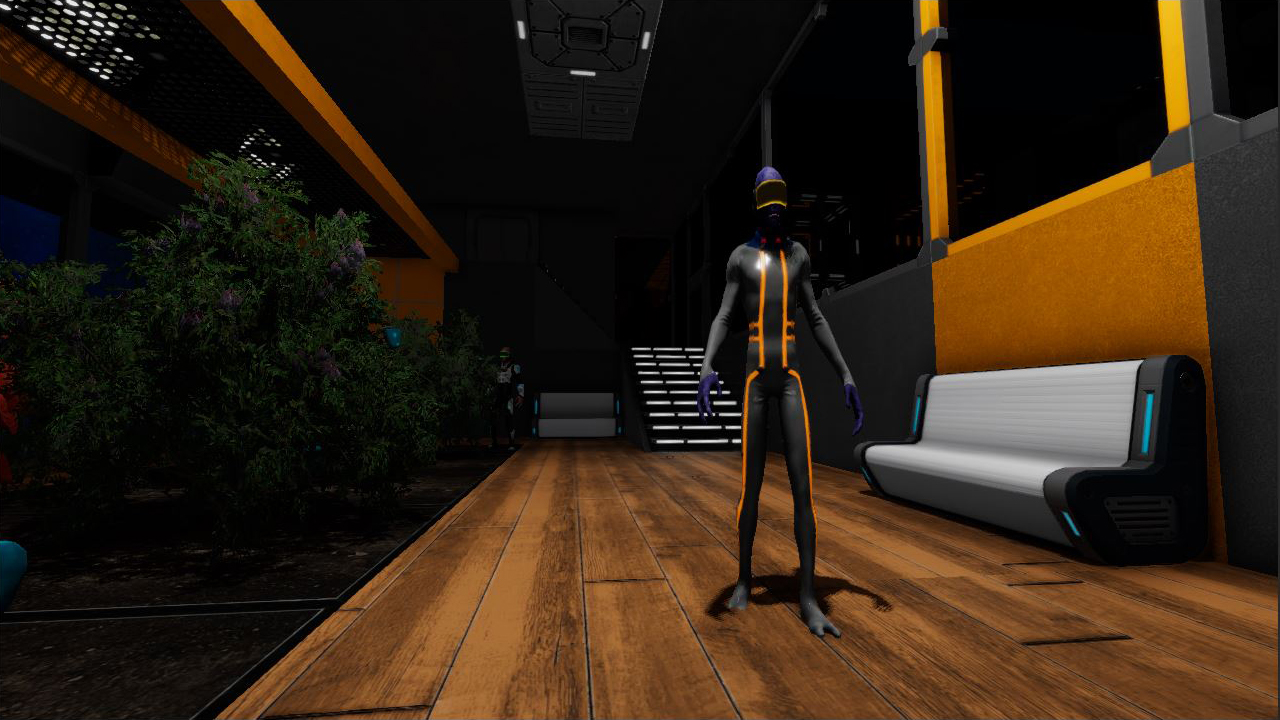 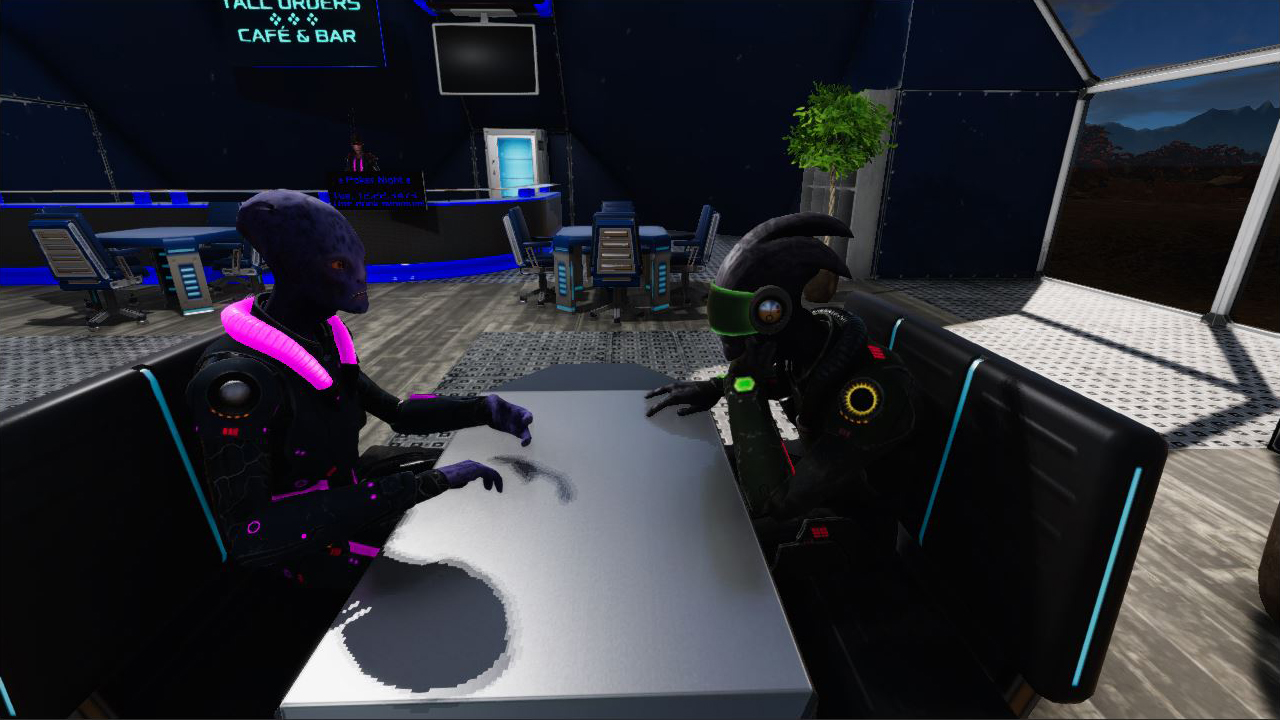 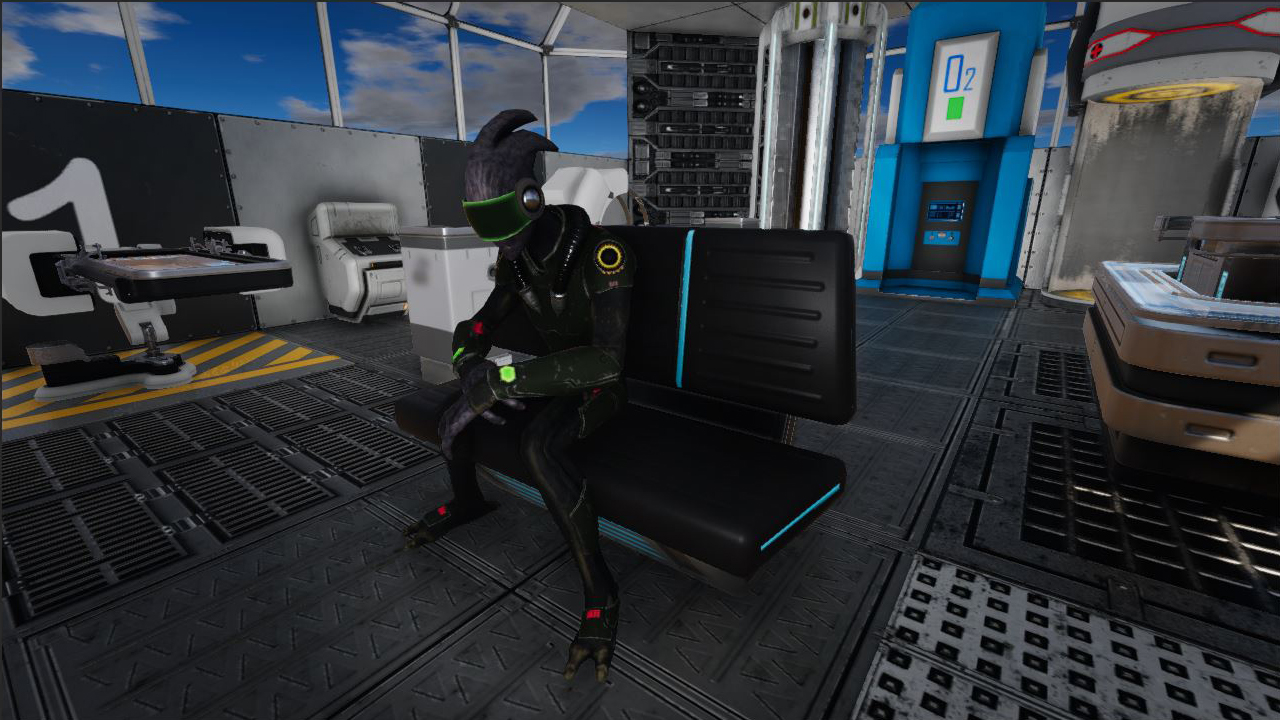 - Added possibility to configure the NPC Spawner and select from available NPCs. You have the choice from more than 50 different NPCs: e.g. you can now add spiders to your POI or dungeon 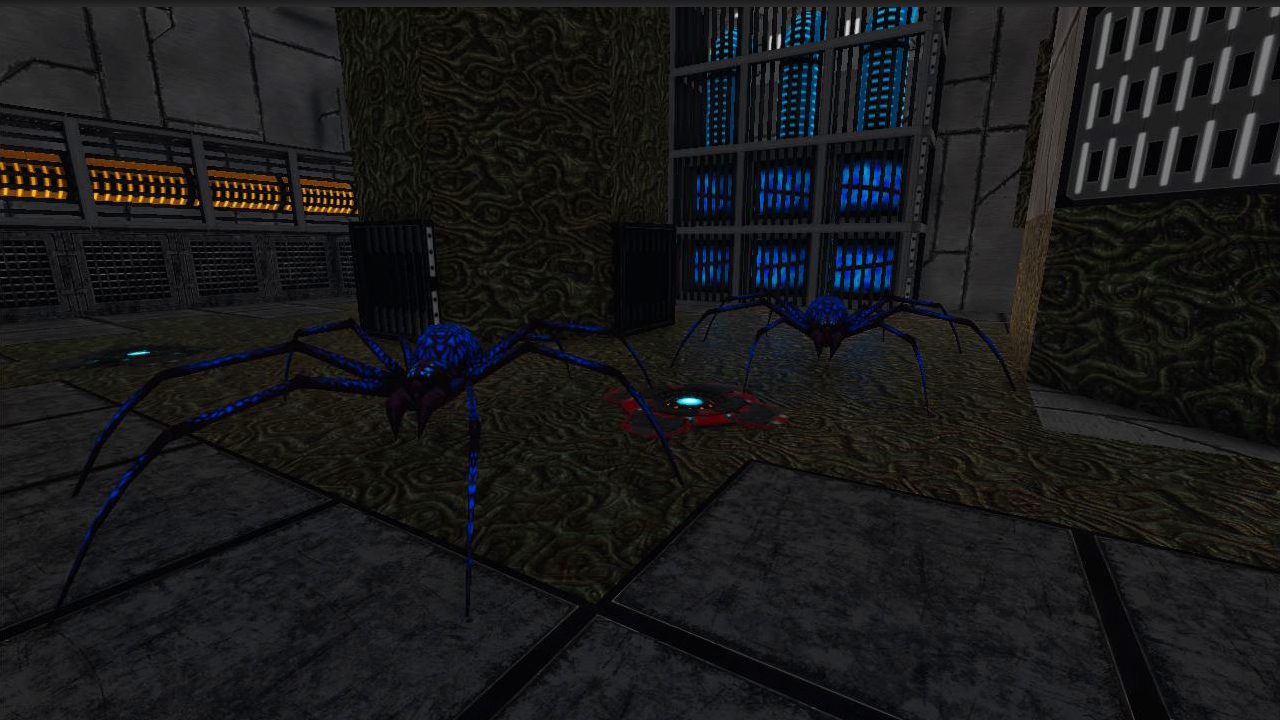 - Tweaked alien trader (better model)
- Traders now wander better behind desk and draw weapon only when attacked
- When placing trader block, trader is now in idle animation
- Added new pistol for trader
- NPCs now de-spawn if not moving for longer than 2 minutes (eg when they are stuck)
- Added better loot to trader and assault cyborg

Optimizations:
- Tweaked GPU instancing to improve performance
- Water reflection probe is now 512 instead of 1024. In low setting it is 128 instead of 256

Balancing:
- Tweaked damage of weapons to trees (eg minigun does not destroy trees anymore)
- Changed RCS power calculation -> CVs will now rotate a bit slower, depending on their mass (our aim is to increase difference between SV and CV handling)
- Added max RCS value to the statistics window

Playfield Reload:
- Added console cmd 'playfield' to reload the current playfield while the game is running:
* thus you can now tweak the playfield when the game is running to test some new settings, eg sky color, terrain, etc.
* go into D:\Steam\steamapps\common\Empyrion - Galactic Survival\Saves\Games\NewGame\Templates\Temperate and open yaml in this folder.
* change a value, save yaml and use console cmd "playfield" to reload it
- Renamed cmd 'playfields' to 'sectors' (thus: "sectors reveal")

Map Marker Update:
- Allow to have temporary Device-Waypoints in HUD 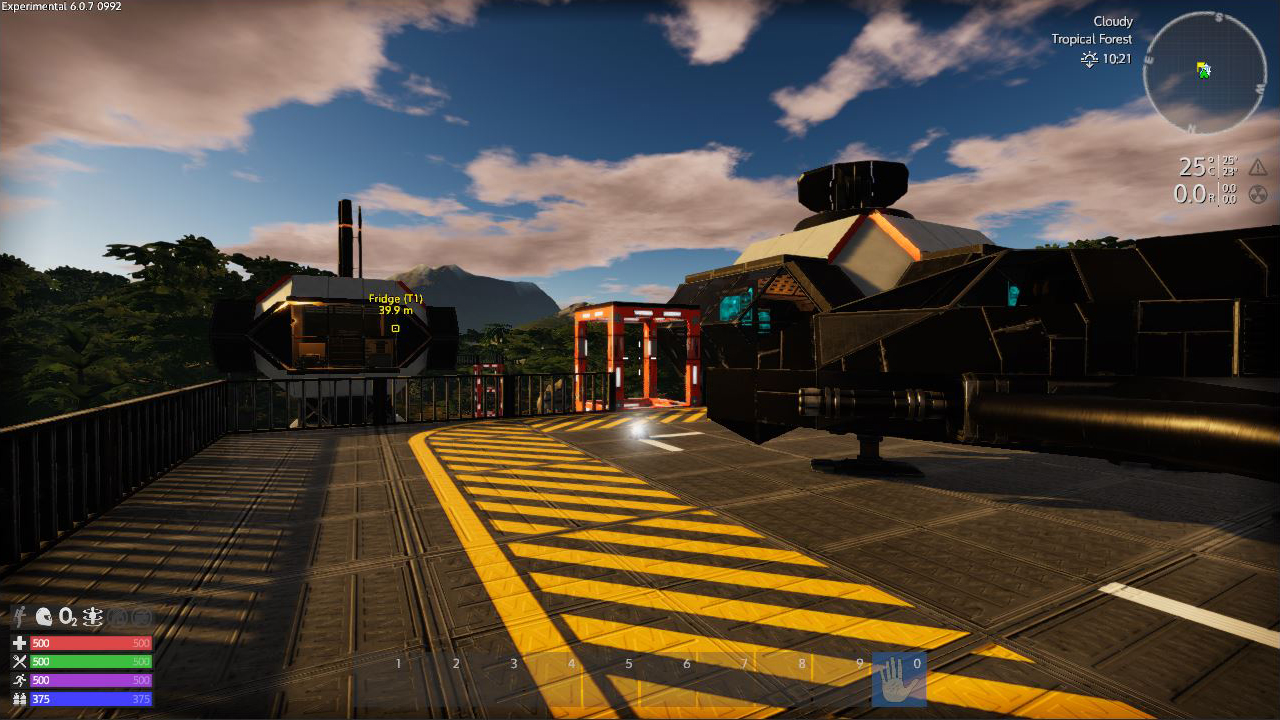 Visuals and Sounds:
- First draft of night vision (you can activate it with L; toggle between shoulder and night vision) > we will add night vision as an extra item that has to be in inventory 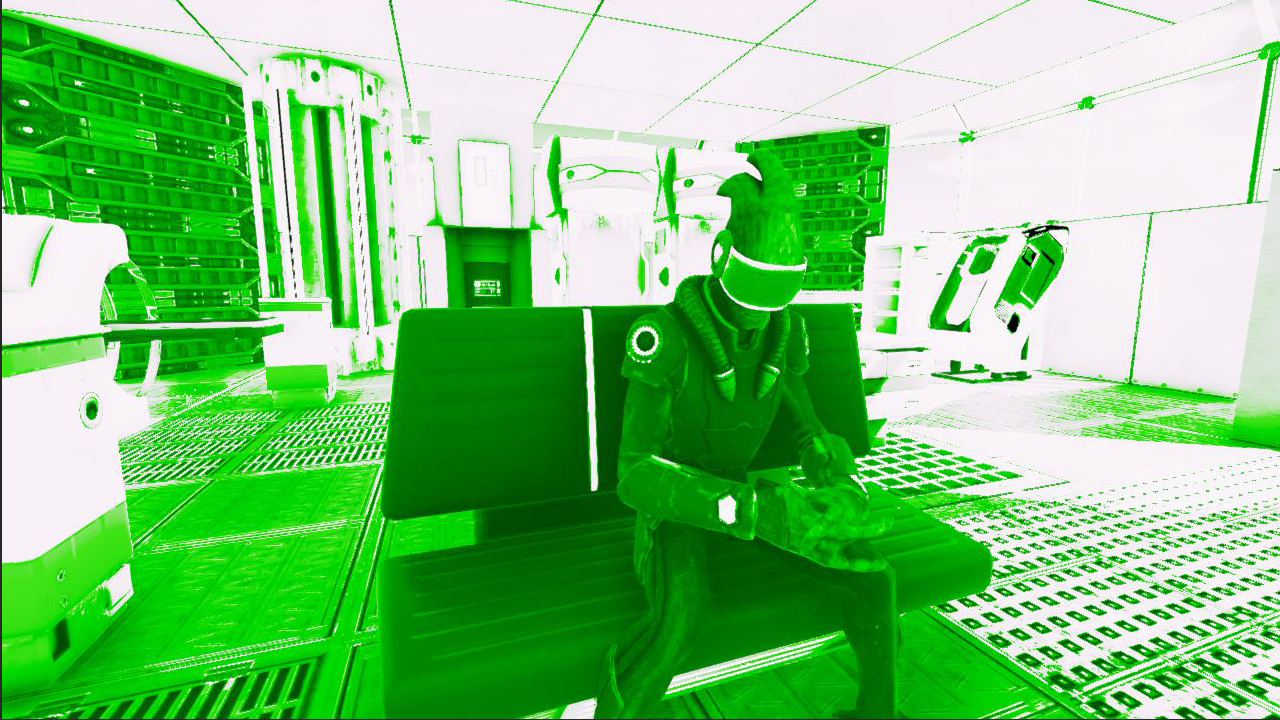 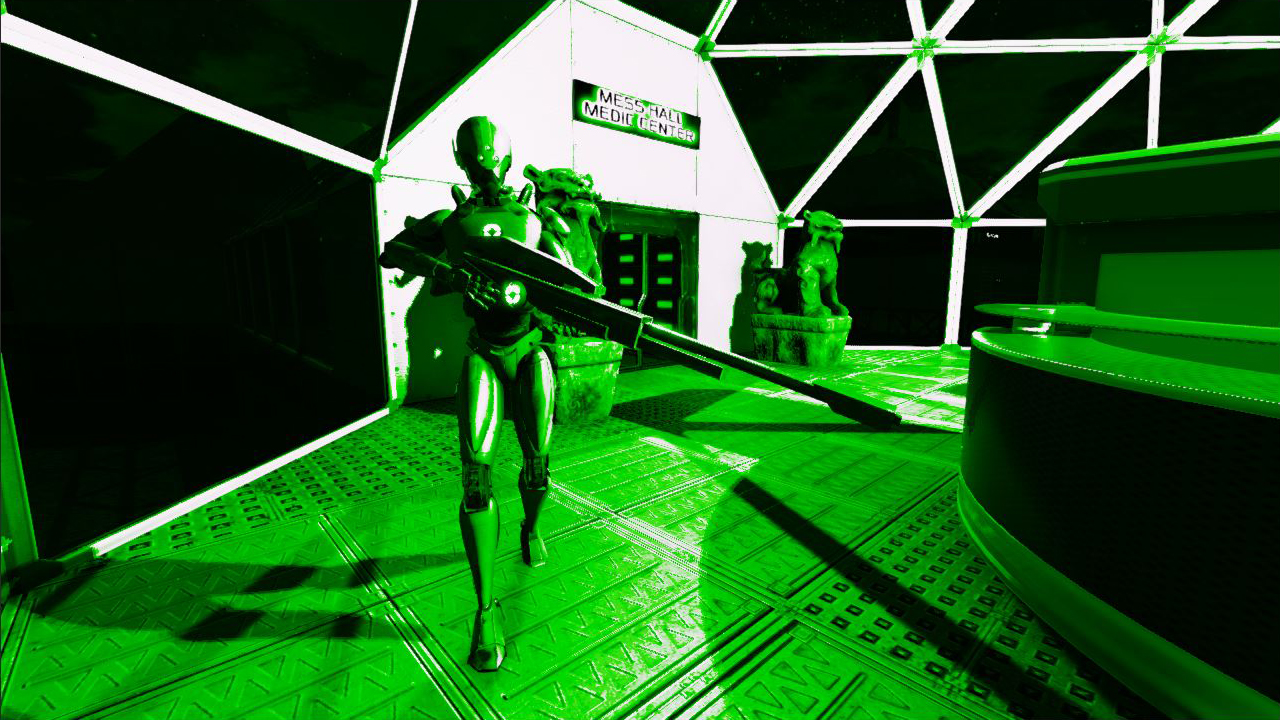 Bug Fixes:
- Workshop functionality fixes
- Fixed: Godmode shift is not working anymore
- Fixed: Body suit o2 isn't consumed when underwater.
- Fixed: Motion Trigger aren't active directly after entrance by portal
- Fixed: Exploit with boosts carrying over from SP to MP in Armor slots.
- Fixed: Problem with missing muzzle effect on trader weapon / cyborg weapon.
- Fixed: COQ if Approach a player-set waypoint with remove on approach
- Fixed: TS and TSO do not have O2 anymore
- Fixed: Repair Station notification (yellow) showing internal string
- Fixed: StimBoost (Adrenaline Pills) is showing internal string
- Fixed: Error message of flie plant on Akua
- Fixed: You can have multiple cores and multiple weapons / turrets on one structure in MP
- Fixed closing of UI Scrollable Popup list when clicking on button/field
- Fixed overlap of object and scrollbar in UI Scrollable Popup List
- First version of Workshop fix: please test uploading / subscribing of Blueprints
- Fixed: Picking up Trader hand weapon results in owning a powerful gun with infinite ammo
- Fixed: Issue with core losing power when pressing P for the control panel.
- Fixed: Issue with core disappearing when pressing Y to switch on power.
- Fixed: Adding NEGATIVE amounts to WITHDRAW field of tanks results in filling the tank
- Fixed: Random CoQ error while flying SV
- Fixed: Player drone cannot be deployed near PlayerCoreAdmin Buildings
- Fixed: Removing plants with MT gives back DUMMY BLOCK (now removing sprouts gives you rotten sprout)
- Fixed: HullDestroyed does not return components when removed via DECONSTRUCT mode
- Fixed: Withdraw fuel/o2 with full inventory leads to vanished fuel/o2
- Fixed: Turrets still attack Predators when Attack option Predators is unchecked.
- Fixed: Animation issue when swimming & switching from 3rd to 1st person view.
- Fixed: Troop Transporter locked in place / hovering (3 similar cases)
- Fixed: Jetpack sound of 2nd Player far away is as loud as your own (tester: please verify)
- Fixed: If entering an instance with a # it is not revealed on the map
- Fixed: When exit instance in a cockpit you get a hard crash
- Fixed problem that an explosion caused too much damage when a large model like a turret was hit inside its bounds.
- Fixed: CoQ when opening the Map on Omicron Moon & Akua moon.
- Fixes: Ship warps when instance timer is up with you
- Fixes: Ship guns are in backpack after re-enter instance
- Fixes: Add waypoint/marker icon to RADAR outline ring
- Fixed playfield server crash
- Fixed missing internal Blueprints on first game resume with custom scenarios
- Fixed: MP: POI/bases like TSO and TSP cool down/heat up only if player is around after teleporting
- Fixed: Docked SV/HV in an enclosed CV hangar will cool down to space temp if not manned
- Fixed: AICVs can not / do not start anymore or just sink to the ground
- Fixed: Blueprint Library: Showing Workshop title instead of blueprint file name for subscribed blueprints (in list and in info box)
- Fixed: Resume Game: Showing Workshop title for published scenarios
- Fixed: Random CoQ when using teleporter between TSP and TSO Akua
- Possible fix for: Random crash when teleporting from Akua to Akua Orbit. Empyrion.exe has stopped working.
- Fixed problem that trader was playing walk animation when idle
- Fixed: Creative: not possible to remove Trader
- Fixed: When clicking on save & exit for empyriondedicated.exe it crashes (new: When EmpyrionLauncher starts a dedicated server with UI no '-force-3d39' parameter is used tp prevent crashing on exit)
- Fixed: MT returns wood logs when used on three > cannot remove trees with MT anymore
- Fixed PDA: After playfield change the active task's actions are not working
- Fixed: Repairstation in an Offline-Protected Base still works / Powerdrain Exploit (sometimes shuts off OP when base power is empty)
- Fixed: Signal logic: Delayed signals can crash game
- Fixed: CoQ when setting a sender signal name that is already used
- Fixed: "Checking workshop..." message box stays when leaving the menu (e.g. Blueprint menu)
- Fixed: Actions not visible after reopen PDA window
- Fixed: PDA: If you are too close to a NearPOI the action does not get resolved
- Fixed: PDA: complete messages do not show in chat anymore after a certain amount of text has been loaded
- Fixed: Pathing problem of some NPCs: they sometimes jumped on small desks and tables
- Fixed problem with console spam when drilling terrain or meteorites
- Fixed: Water color changes in some situations
- Fixed problem with Cobalt Meteorite (washed out color)