Posted by EleonGameStudios on Apr 18th, 2017 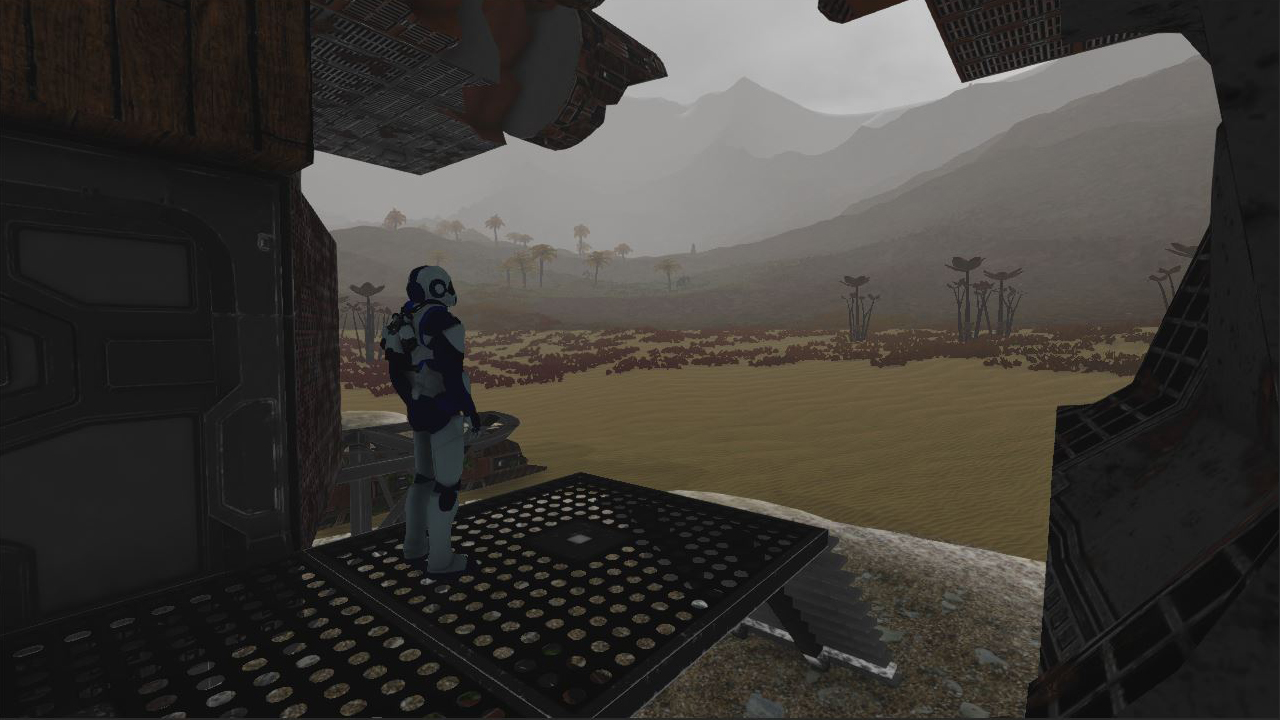 Welcome to stage 3 of our Road to Alpha 6.0. This time we started to add two new major gameplay elements: A revised game start, revealing of sectors and a first version of NPC traders.

While the NPC Traders are still stocking up their storefronts and therefore have been added as inactive NPCs for this release, the new game start can be reviewed right now. In order to not influence your feedback too much, we suggest to simply start a new singleplayer game on Akua and send your feedback over here after having completed Chapter I: Empyriononline.com

If you are interested in details of the changes and how you can customize your game start individually or if you are all new to Empyrion or Alpha 6.0 Experimental, please read the FAQ over here: Empyriononline.com
Note: The FAQ content is now also available in the In-game Knowledgebase (F1)!

Of course there is more than only two new features coming with Alpha Experimental 6.0 Part III. We also added and modified the already available features, made a lot of smaller and larger changes (AI, Weather, GUI...) and of course worked on some bugfixes (drones attacking again! ;-)

Just have a look at the changelog below.

Thanks in advance for reporting bugs over here: Empyriononline.com

As always: Experimental Part III has seen a lot of code changes. If you do not see your issue fixed below, we would like to ask you to re-test your issues and re-report if still happening.

What’s next? For Part IV we aim to smoothen the edges around all the features. Gameplay changes, rebalancings and other necessary steps to improve the usability and game experience are to be expected in this phase, before starting the final bug-fixing stage.

Now - board your escape capsule and have fun! :)

NEW GAME START:
- Added wreckage POIs to start points on Akua, Ningues, Omicron, Masperon: thanks to Captain Jack, Frigidman, JMCBurn, Runningwithhamster for their awesome creations!
- Tweaked game start equipment on Akua, Omicron, Ningues and Masperon
- Starting on Masperon directly in wreckage POI
- Reduced content of Escape Pod
- Added iron, copper, cobalt, silicon, magnesium to large rocks when destroyed, e.g. rock areas on Akua. This will be a new source of resource in the beginning
- Added Stone that drops Promethium Ore to starter planets.
- Drill T1 is now also able to remove rocks to obtain resources
- Added Motorbike Kit only to Personal Container on Masperon (no motorbike kit on other planets)
- Updated PDA: Added first Story-Tutorial Mission (more to come). Known issue: if you are closer than 100m to the hideout when the mission starts, task cannot be completed. In this case, open the PDA (F1) and manually complete the task by clicking on the task.

Some of the new wreckage POIs that will serve as your first hideout: 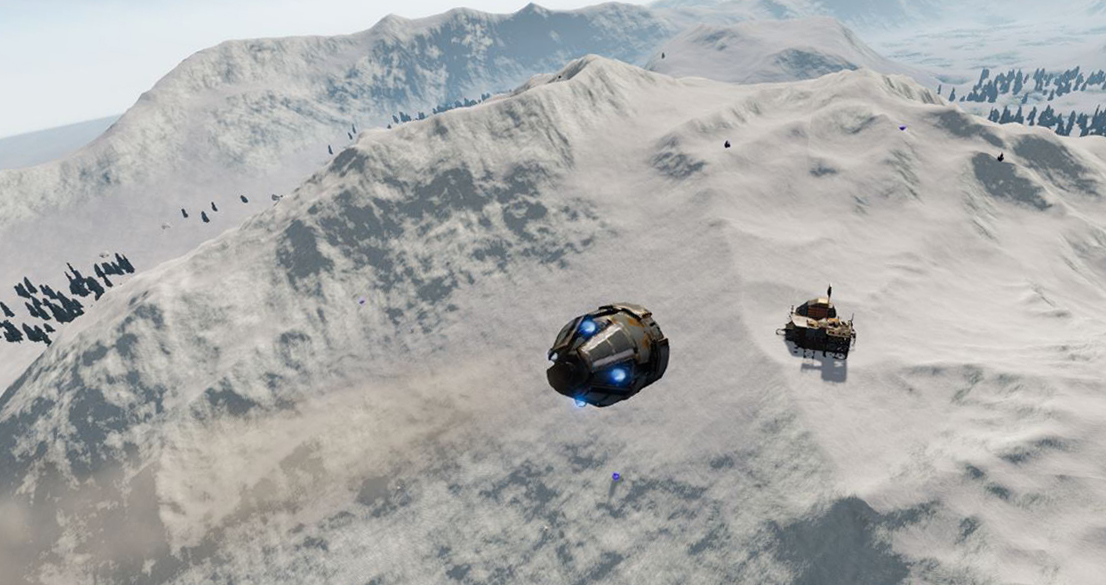 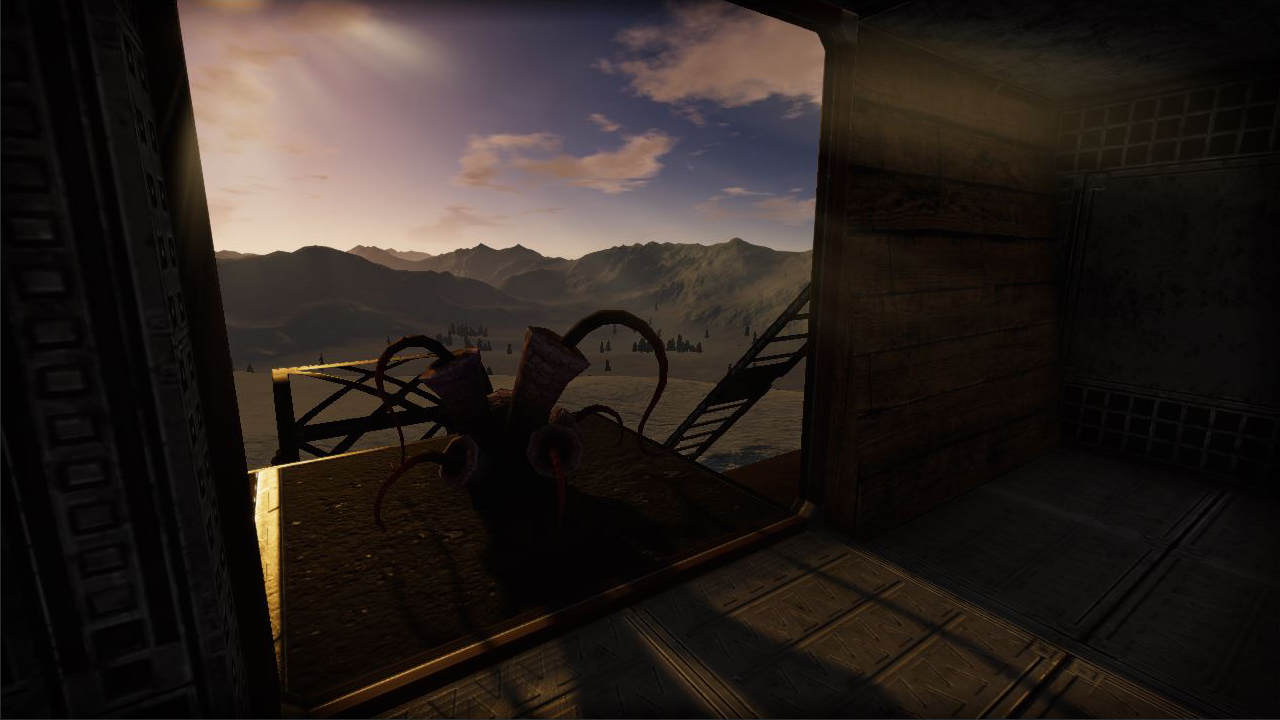 Feedback Questions:
- Attention: you have much less equipment now and thus the game start will be much more of a survival experience. Please let us know what you think!
- What kind of wreckage / starting POIs do you expect? Do you like the style of our current wreckage POIs or do you expect something less “Mad Max” style and more “The Martian” style? 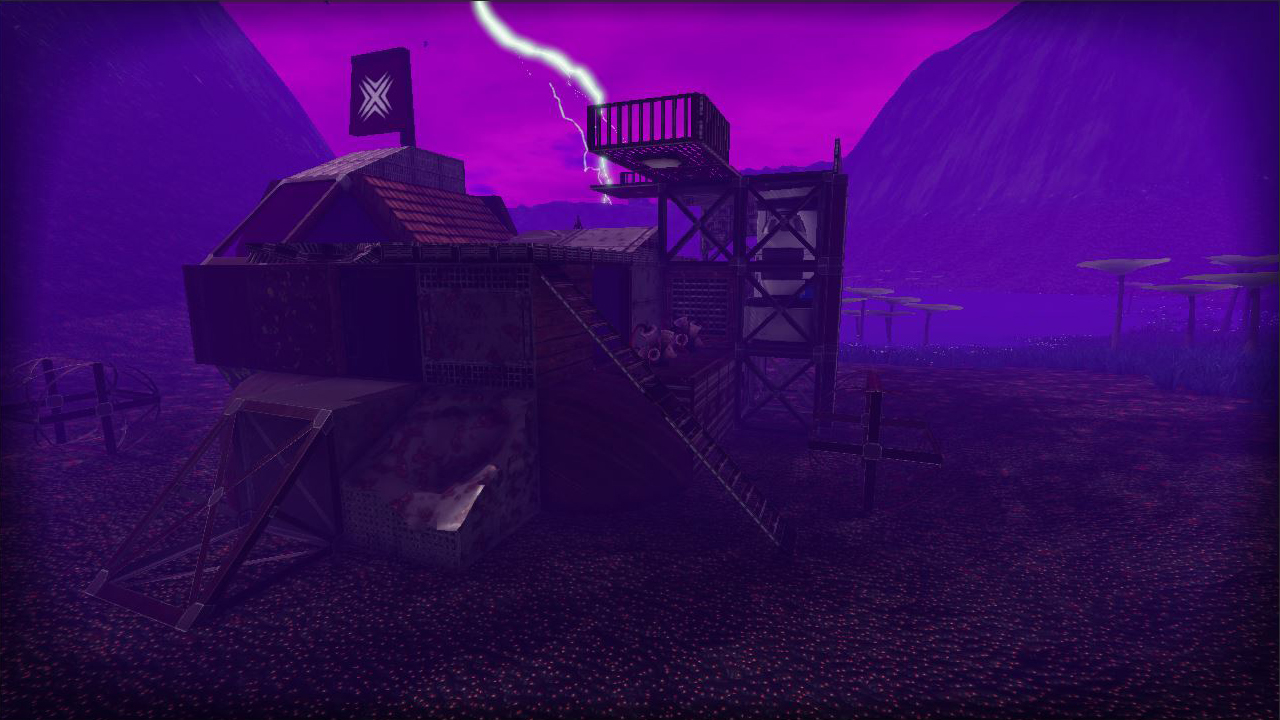 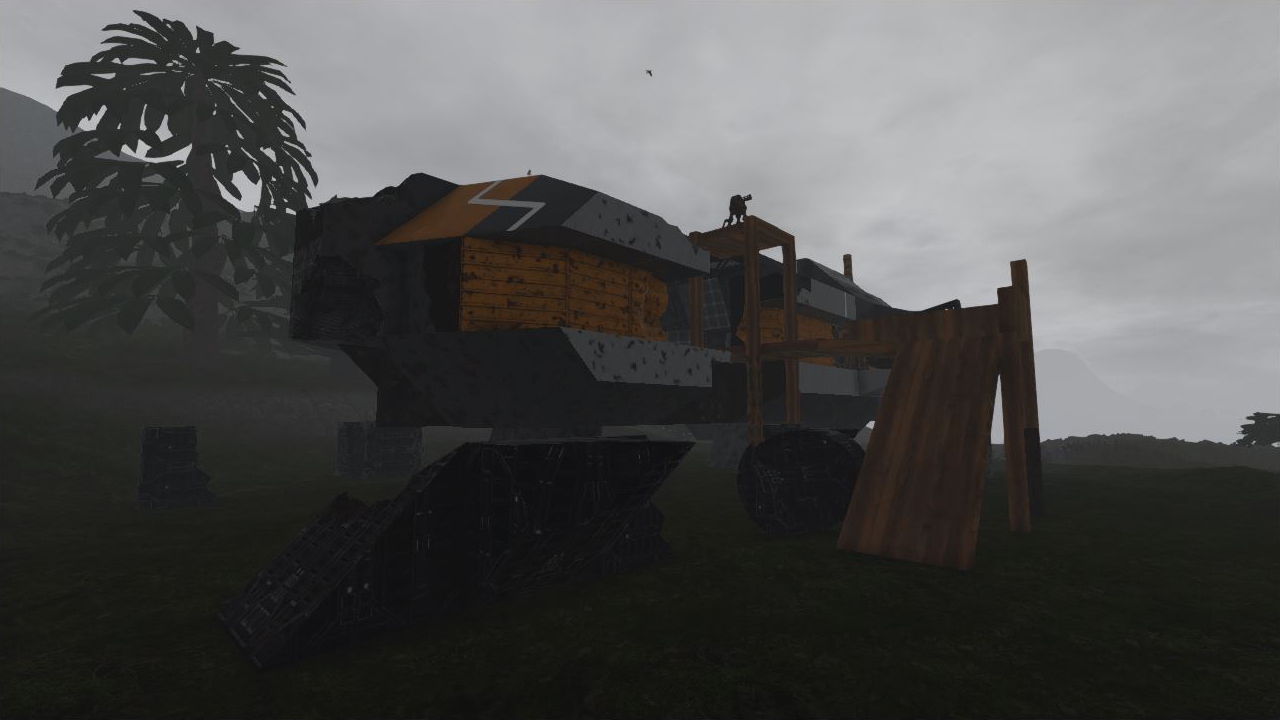 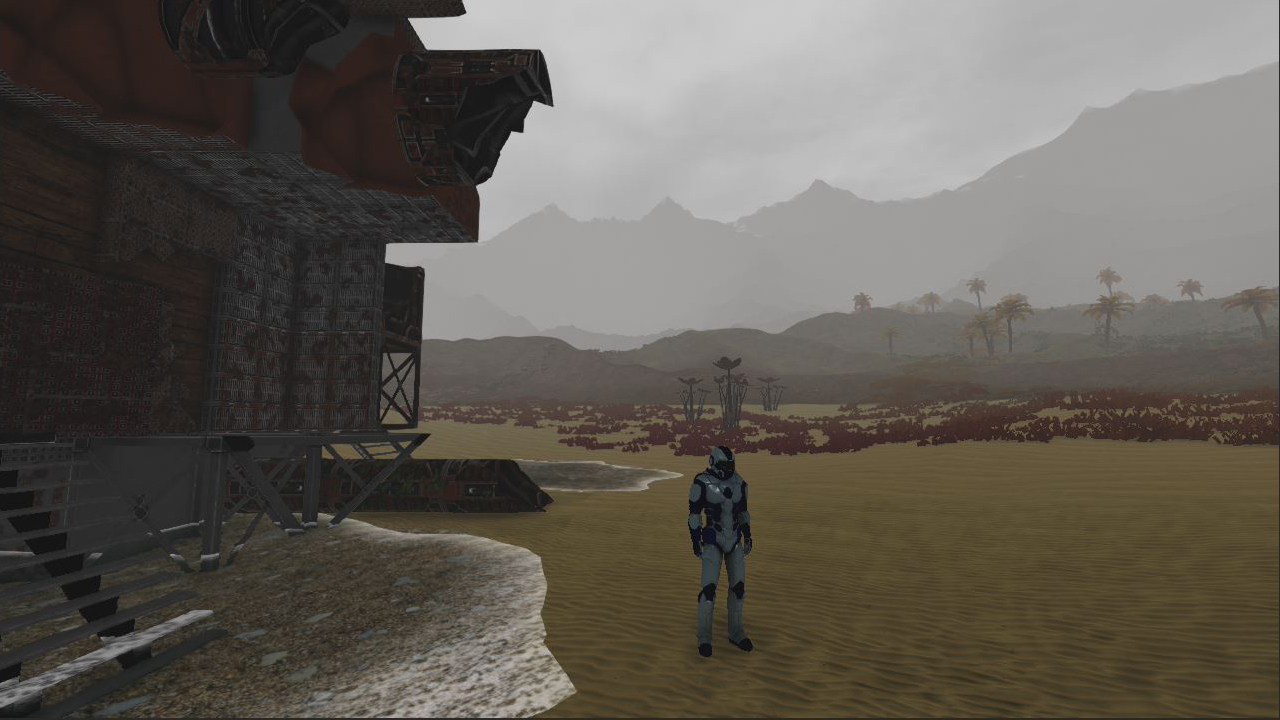 SECTOR VISIBILITY:
- Added revealing of playfields: when you start a game, only the neighboring sectors are visible on the sector map
- Added Console Cmd: playfields reveal / playfields hide 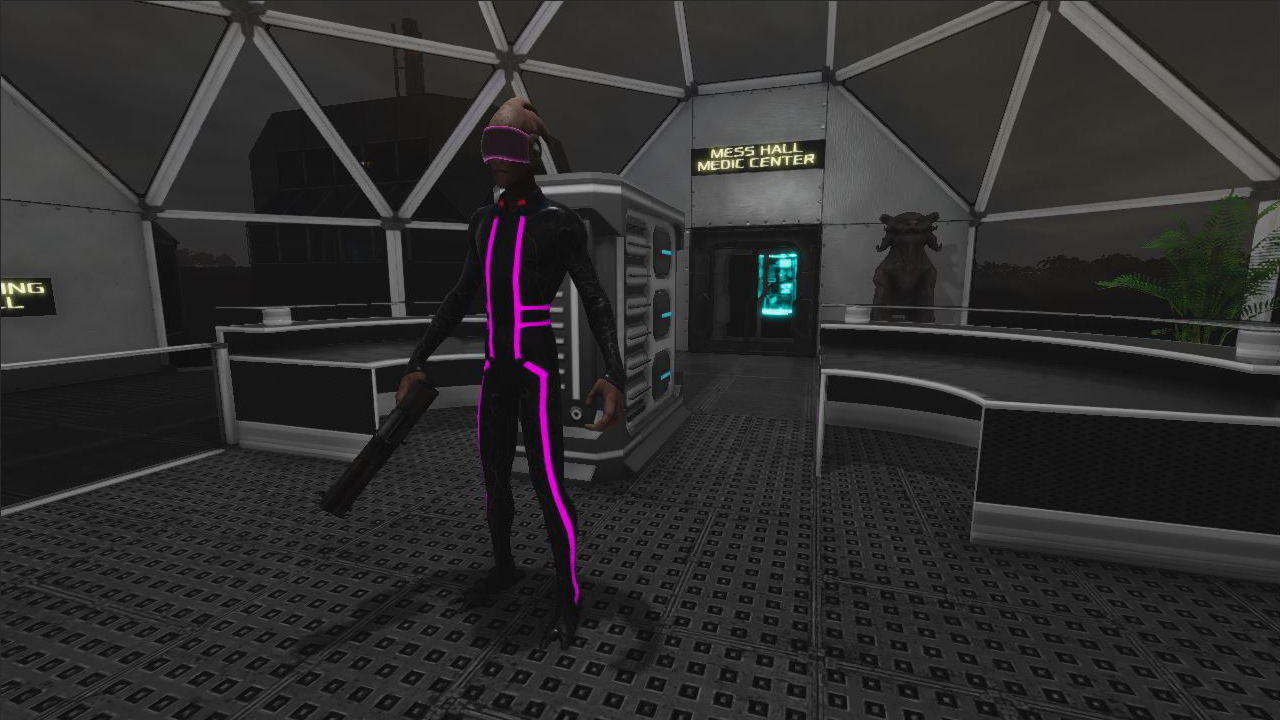 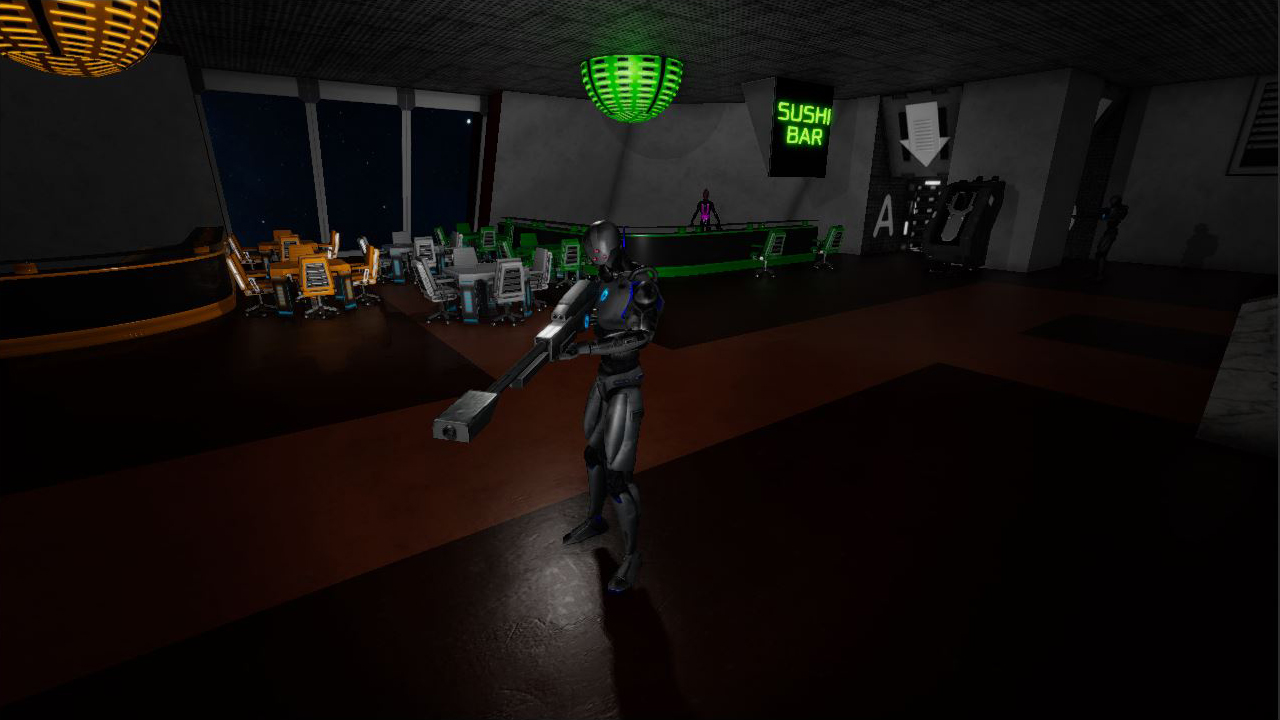 GAMEPLAY:
- Added possibility to disallow CVs on planets via flag (AllowCV: true / false) in playfield.yaml of a planet
* CV are not allowed on ice planet "Aclite" (Example1 scenario) anymore for testing.
* when approaching planet in orbit, message appears and then CV is blocked
* BP spawning not yet adapted (we will disallow spawning of CV via F2)

CHANGES:
- Improved re-login mechanics with cockpit: When exiting game while in a cockpit, player is placed into the cockpit again (if cockpit has not moved in the meantime)
- Upgraded Unity to 5.6: we are still tweaking the GPU instancing to improve performance for upcoming EXP4 release
- Added share to faction to map markers
- Optimized water reflection (better performance)
- Add Checkbox to Build Settings for "Show Debug Airtight"
- Add Checkbox to Blueprint Window for "Save Damage States"
- Shower can now increase / decrease body temperature (depending on current body temp)
- Portals: Supporting restricting to Origin and Faction limitation
- Updated HV Tier 1 (thanks to Captain Jack)
- Reduced sound of motion sensor + light barrier
- Updated terrain for desert (only under water area): Added a min terrain level to allow for decorations at the bottom of the lakes
- Only consuming 75% of suit-O2 if player is in a structure with helmet on
- Player spawner block is now airtight.
- Weather console cmd on server now requires Moderator level.
- Added weather server + client command to get the current weather.
- Teleport command now also teleports the ship you are controlling
- Added code lock + control panel group "equipment" to functional devices
- Added Localization for all status effects.
- Respawn in medic station: name of the base is shown in respawn window button.
- Mod Interface Update
- Warnings message "you are leaving the playfield" now only appears every 60s and in a distance of 15k in in SP and 50k in MP.
- Adjusted the water level to avoid gap between LODs
- Updated scenario "Dawn of Galaxy" and "Invader vs Defender"
- Added red text for certain quality settings (high impact on performance)
- Do not open Map Marker Dialog when teleporting on map (Shift+LMB/Shift+RMB)