Alpha 9 is out now! We have the Sandbox Galaxy and Editor ready for you to test. In addition we added a first version of the Time Trial game mode in which you can earn additional stars. Check out the good news in detail (including a short video explaining the Sandbox Editor) and read more about future development plans on our redesigned website... For Early Access users there's a winning contest going on as well ;D

Posted by seriousmartin on Mar 6th, 2015

Alpha 9 is out now! Another important step taken :-) Here is what it adds to the early access version of Imagine Earth:

As introduced in the last Friday Report, you are now able to generate as many planets as you like to and save them to the Sandbox Galaxy. You can use each of them for the Free Play and Time Trial mode (described below).

Since generating planets clearly isn't enough we added the editor. The editor works for all of your sandbox planets. You can start it in the planet menu - the same place you would start a Free Play. Within the editor you can terraform (Keyboard M and N), define the type of every field and place and remove every building you like. Finally save the result and go back to the Sandbox Galaxy to play your planet. Watch the video to see everything in detail.

After raising the limit with new Landing Permissions and Research Tokens for up to 20 million people on each planet, we decided to include a first draft of the Time Trial mode.

This mode is made up of up to 5 race goals like "500,000 people until week 500". If you reach one goal the race for the next starts. If you fail one goal, you loose. The time you have for each goal depends on the amount of population needed and the difficulty you choose.

The Time Trial mode is clearly not perfect yet. We look forward to hear your feedback. 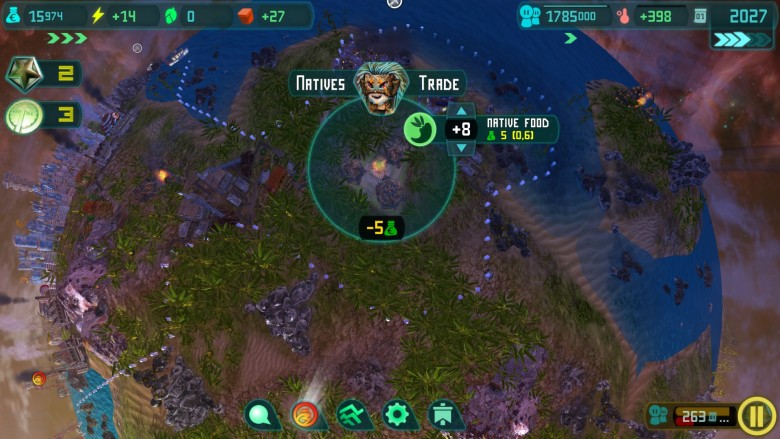 The natives on Rounos will now sell their precious and tasty food to you. Make sure to negotiate first, because otherwise they wont trade with you. The food price depends on their mood and the maximum amount on the number of forests surrounding them.

Natives added to a sandbox map will also trade with you.

Two details among other things we changed:

What didn't make it?

What is planned guessed for Alpha 10?

Win a Steam key for a friend by populating Joma Free Play with the most people. One important condition: You have to maintain a positive climate balance. Upload your Steam Screenshots to our community board on steam. The winners are announced in next weeks Friday Report #3 in the blog section!