Eleon Game Studios releases Alpha 6.6 with convenience and builder tools: e.g it is now possible to switch weapons while reloading, the "auto-break" for vessels can be switched on/off, the mirror plane now works with the texture and color tool and other improvements and bug fixes. In addition, teaser screenshots from the internal Alpha 7.0 development branch have been released.

Posted by EleonGameStudios on Aug 15th, 2017 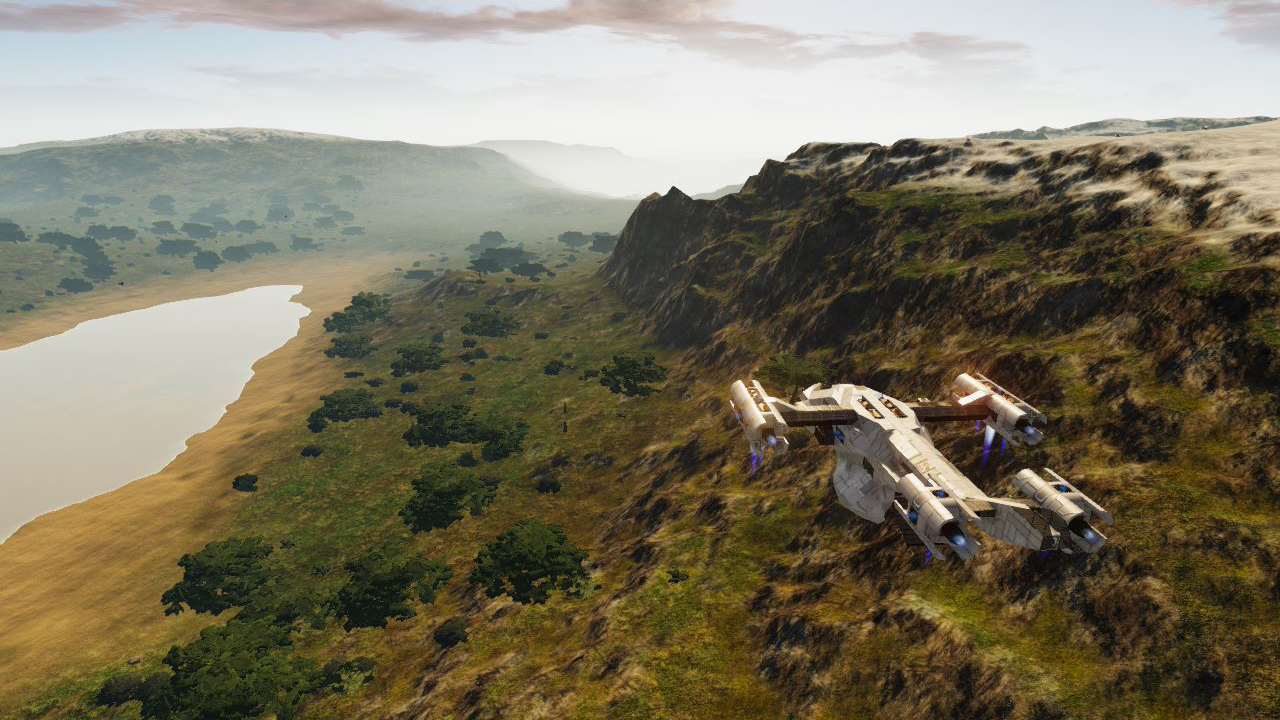 The above screenshot is from our internal Alpha 7.0 development branch. More teaser screenshots can be found below.

With Alpha 6.6, we added a few new convenience features. You can now switch weapons while the reload animation is in progress. Moreover, for all long range or dogfight pilots, you can now use the new auto-brake to make use of inertia movement in space.

For our builders, we not only increased the range of the texture and paint tools but you can also make use of the mirror planes for painting and texturing! In addition, we fixed the issues with some of the blocks not mirroring correctly. Please have a look and report remaining issues in our bug thread!

For our playfield and planet creators, we slightly changed the rules on how POIs and ore deposits are placed: You can now use the random and fixed mode at the same time and in any combination! For more info, please have a closer look at the “Improved POI / Resource Spawning” paragraph below. We also created a first iteration of the Playfield Reference sheet with all the NPCs, Deco and Textures you can use to build awesome locations over here: Empyriononline.com
Feedback is very much appreciated! ;-)

Finally, we are proud to announce that - thanks to the efforts of some of your community members - “Empyrion - Galactic Survival” is now available in 11 different languages: English, German, French, Italian, Portuguese (Euro and Brazil), Spanish, Russian, Japanese, Chinese (simplified and traditional). For now, the PDA also has been translated into French, Portuguese(Brazil), Russian, Japanese (partially) and Chinese (simplified). Of course there are always new words and terms to translate and some of those are not 100% complete yet, but we think this is a major achievement and a good sign of a great and supportive community, we can be proud of!

If you want to assist with a language not yet added or offer help/make corrections, just get in touch via [EMAIL]loca@empyriongame.com[/email] subject: Localization help

Finally, as everyone might be interested where we are going from here: Alpha 7.0 is already in pre-production and although we did not yet talk about a Alpha 7.0 roadmap (because it tends to change quickly), we plan to give you more information about Alpha 7.0 next week.

Gameplay:
- Added possibility to switch weapons while reloading
- Increased range of color tool and texture tool
- Added possibility to enable/disable the "auto-brake" of vessels. You can toggle the auto-break on/off with the default key "i" (key can be re-mapped)
- Improved “Size Class” calculation: we adjusted formula to weight triangles more and we are now using the 'real' number of triangles. You must save your blueprint again so that the new formula takes effect.
- Increased structure limit in Single Player from 64 to 200

Changes:
- Toolbar can now be removed when pressing the middle mouse button (the default button can be re-mapped)
- Color and texture tool now also work with symmetry planes
- Elevated some console commands to Moderator level and we now display the permission level for all console commands
- Added message when there is another structure in the area where the player wants to spawn a blueprint.
- When a file system error occurs after publishing a scenario, no info was given. Now a helpful message box is displayed.
- To allow deleted Workshop scenarios to be re-published a 'Remove link' button is now displayed in that case. If you deleted your scenario on Steam, you need to click that button to remove the published-info from the game files. Otherwise you can not re-upload your scenario.
- Added 2 seconds timeout to control panel buttons (lights, turrets and main tasks) to avoid misuse
- Added info about savegame version on first start to client.log and console
- Some renaming of stock prefabs + updated all stock prefabs due to improved class calculation 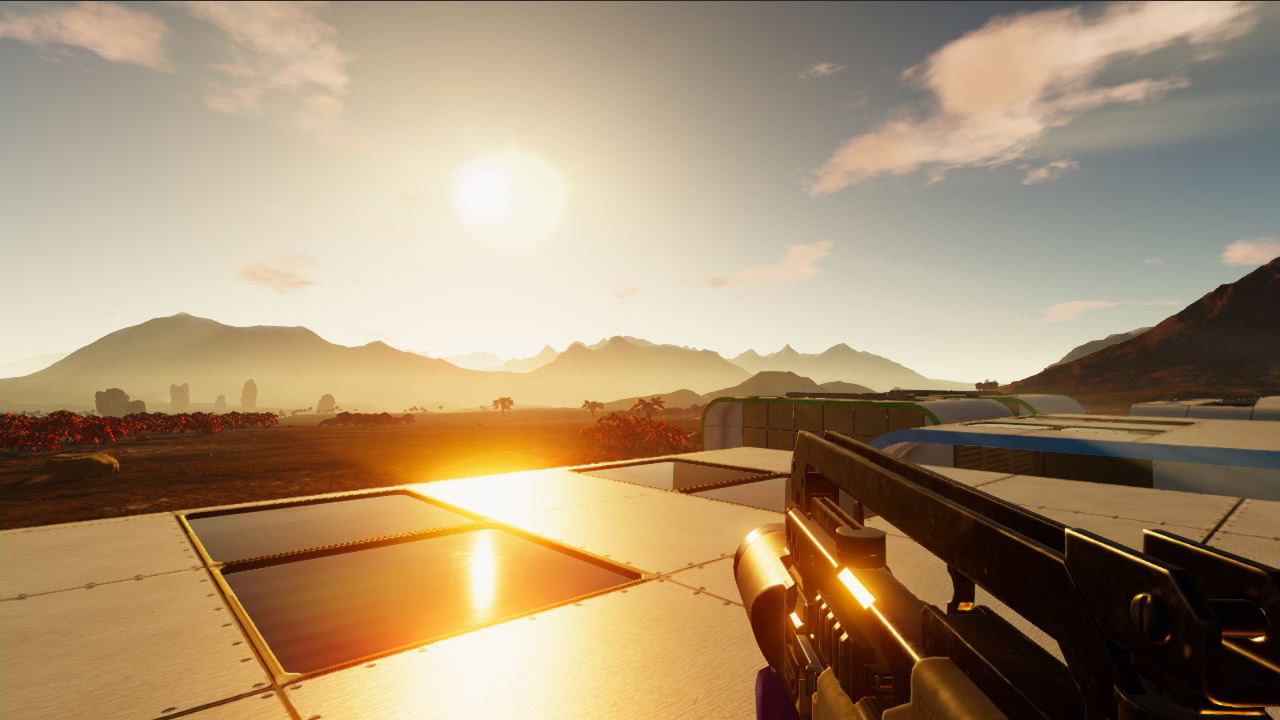 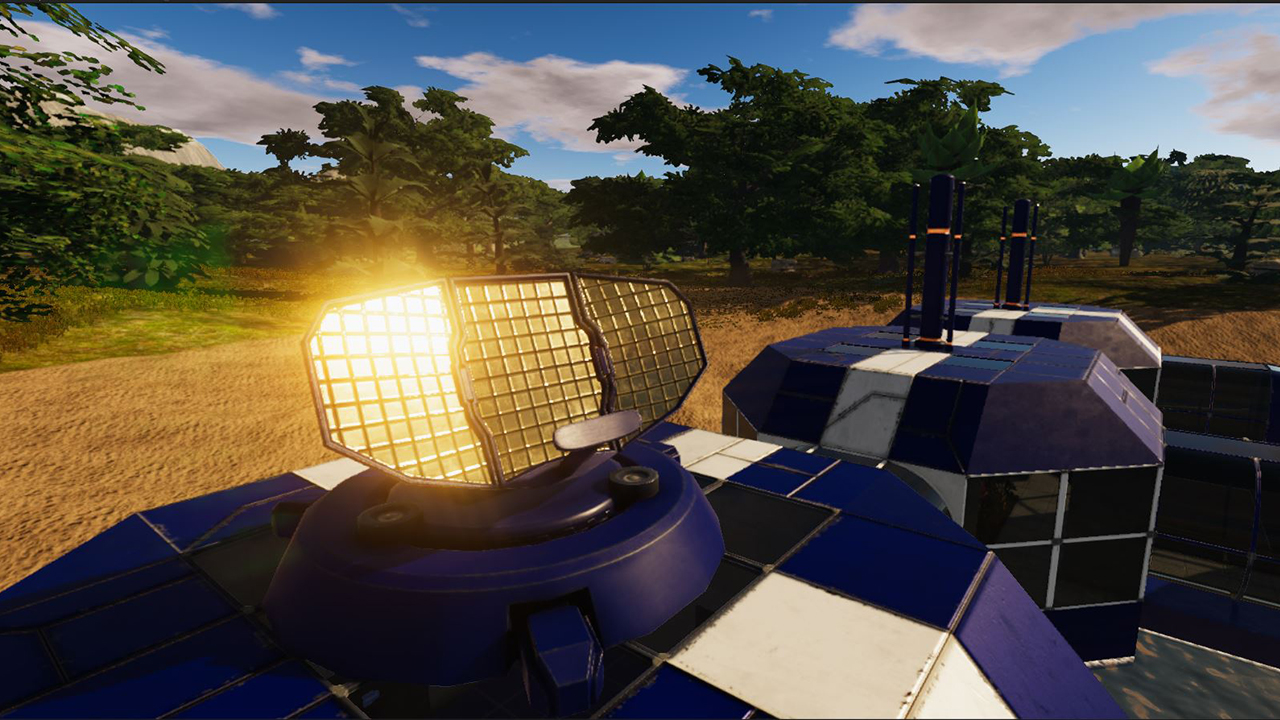 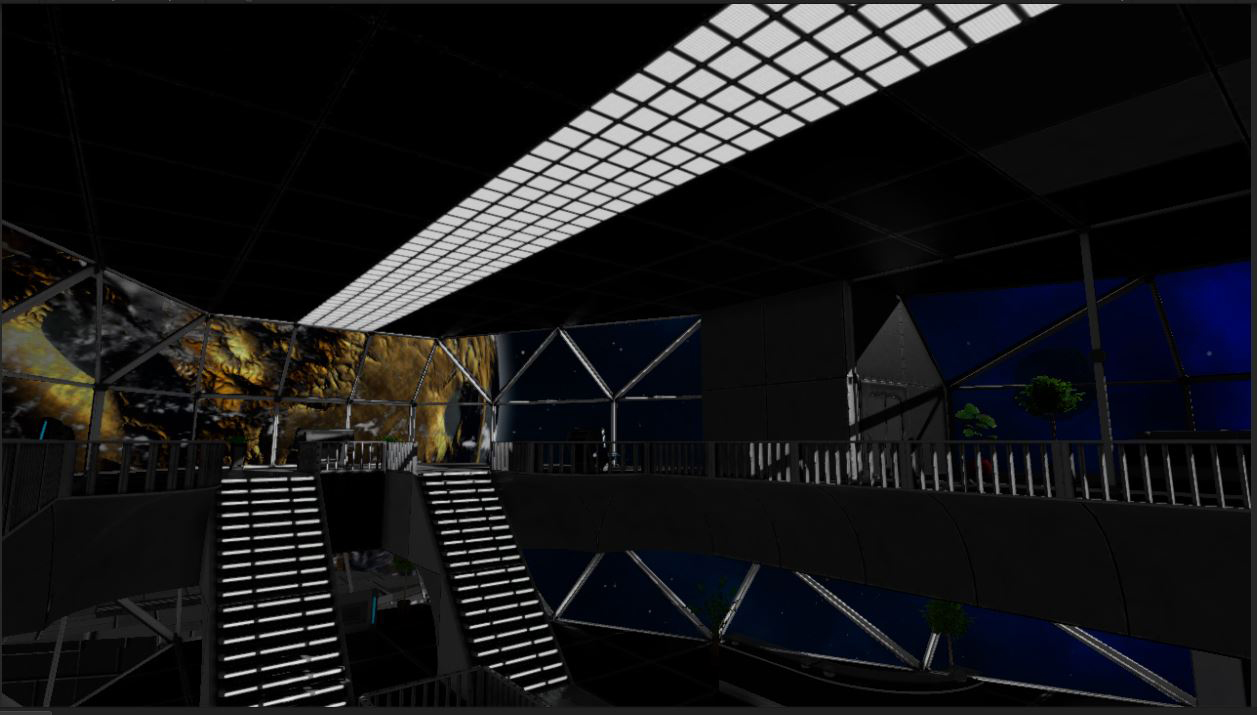 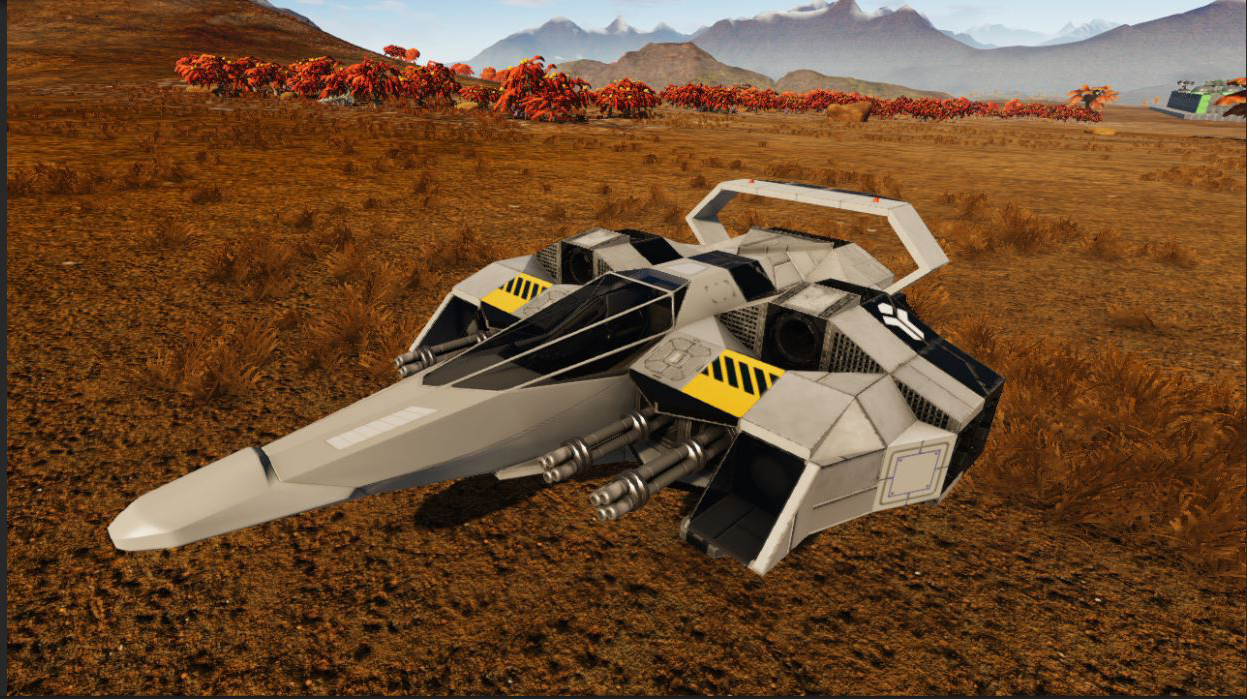 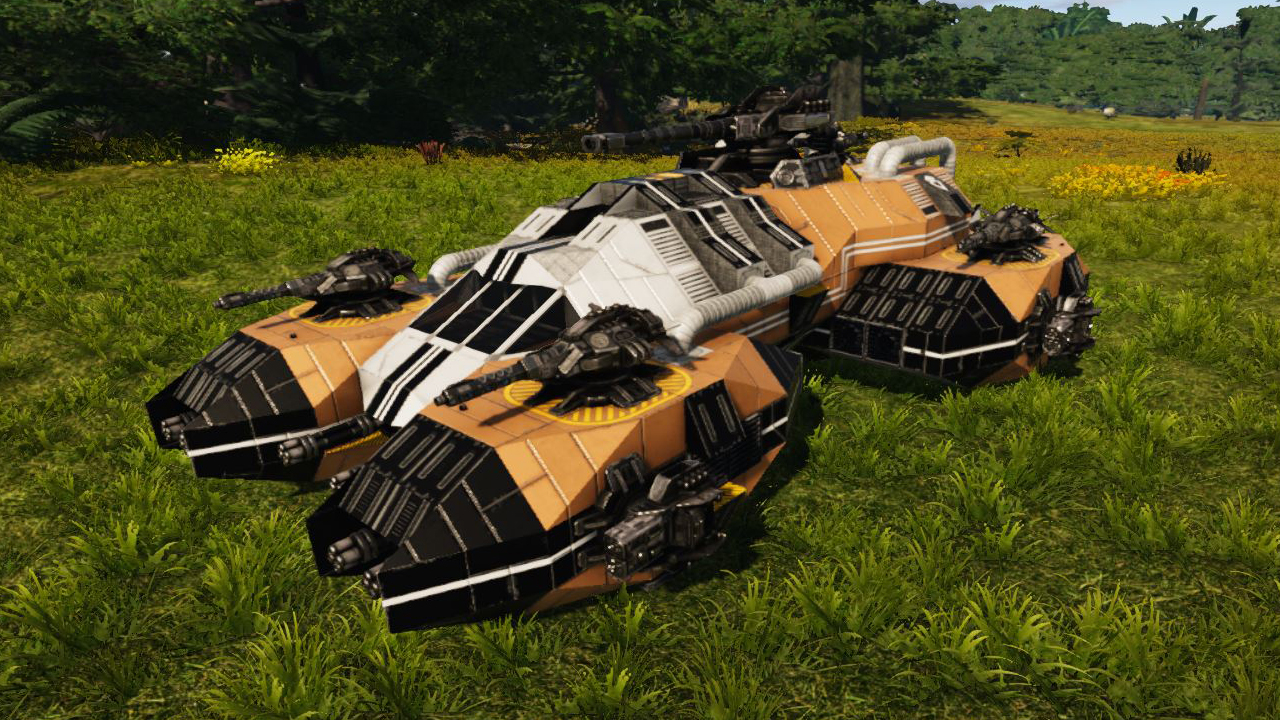 Added new languages for PDA:
- Chinese (simplified): thanks to Ken Guo
- Russian: thanks to Sergei
- Portuguese (Brazil): thanks to FabioZumbi12
- French: thanks to Spartan47
- Japanese (added partly): thanks to Metapo

Bug Fixes:
- Fixed: Several symmetry and mirror tool building issues (eg large blocks, wings, several windows and other hull blocks were not correctly mirrored, sometimes it could happen that a block was not mirrored etc)
- Fixed: Problem that HVs were sliding on small slopes
- Fixed: NPC Nightmares can clip through blocks of vessels & can cause damage to the avatar inside
- Fixed: Player hovering in air when drilling down
- Fixed: Player could use elevator even if not inside elevator
- Fixed: Curved stairs were impossible to get up unless jumping
- Fixed: When starting a local co-op game with the Shadows of Starlight scenario, NPC sounds could be heard that shouldn't be heard.
- Fixed: Blueprint factory was accepting certain items that it should not accept (factory now returns sub-items it does not need for the Blueprint to be produced)
- Fixed: Problem with buried turrets shooting through terrain
- Fixed: Error when using a banned workshop scenario
- Fixed: Problem with dropping items or a backpack onto a rock resulted in them going through the rock so that they became unreachable (MP)
- Fixed: Possible to shoot with fully covered SV guns through blocks
- Fixed: Large Plasma Drones were not counted for the mission Drone Hunter.
- Fixed: Problem that when spawning a base, parts of it could be within an anti-grief area and you could not add blocks to your own base
- Fixed: Problem with "The referenced script on this Behaviour (Game Object '') is missing!" appearing in many output logs
- Fixed: Cube Half did not show Letters and Numbers correctly on the back face
- Fixed: Not possible to walk onto a 2nd set of freestanding stairs
- Fixed: Problem that "SpawnResource" did not work with POIs
- Fixed: Beam of color tool and texture tool lagged behind when moving the tool around quickly
- Fixed: Turning off forward facing thrusters no longer allowed vessels in orbit to cruise.
- Fixed: "Publish Scenario" option was available for some stock scenarios
- Fixed: Subscribing to a workshop BP whilst in-game caused the in-game BP list for workshop BP's to go blank until relaunch of game
- Fixed: Deleting the last Scenario from Steam Workshop allowed re-publishing what lead to an error
- Fixed: When you killed an Armored Golem, its corpse was still standing with a walking animation
- Fixed: Circuit signal got lost when the referenced output signal was from a circuit below
- Fixed: "Dawn of Galaxy" scenario Maiy Mission 2 Gardening "Harvest Crops" never completed
- Fixed: Issue with mirror plane still mirroring with no location set
- Fixed: Light and Turret toggles could still be switched while awaiting switch timer, leading to sometimes wrong state
- Fixed: Problem that player in no faction could block a portal that was set to LockedToFaction
- Fixed: Problem that Corn Dog Snow had normal Corn Dog as harvest stage
- Fixed: Problem that Dimple Dome Snow had wrong harvest stage.
- Fixed: Added missing loca strings for several devices and GUI
- Fixed: Missing text for HUD Objects for dynamic font localizations (eg Japanese)

ALPHA 7.0 - Teaser Screenshots:
We have some more teaser screenshots fresh from our internal Alpha 7.0 development branch: 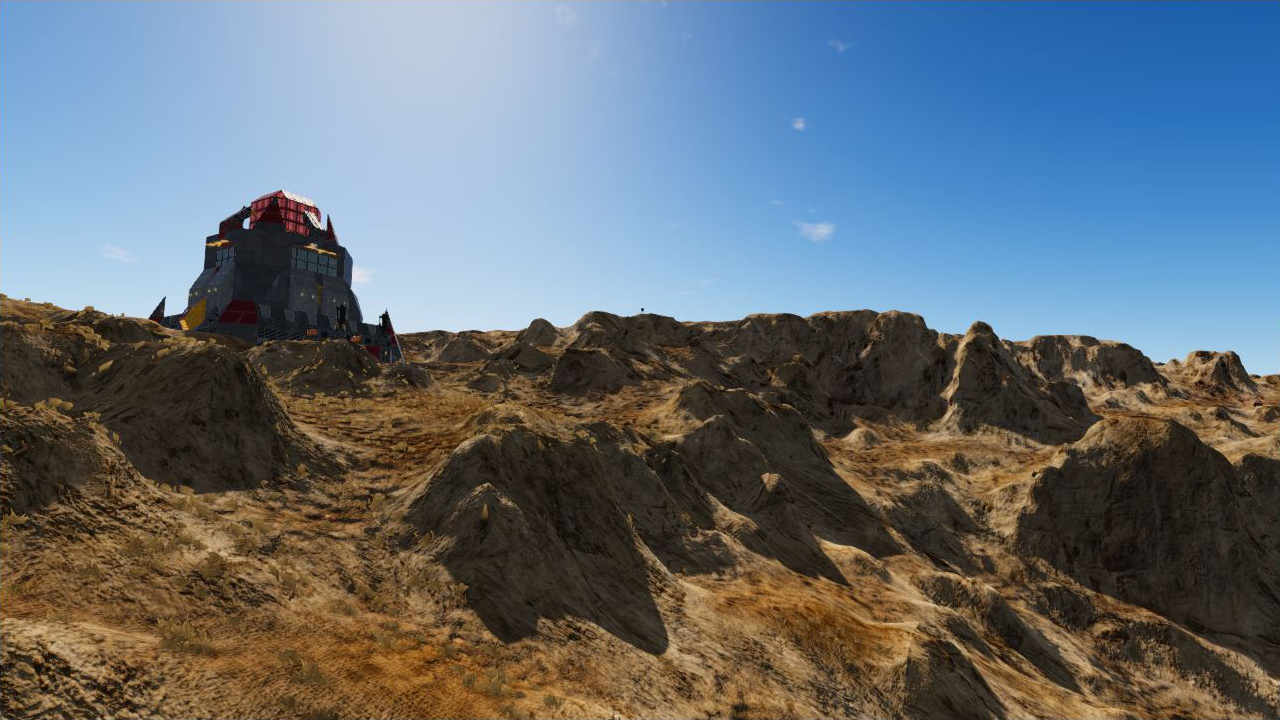 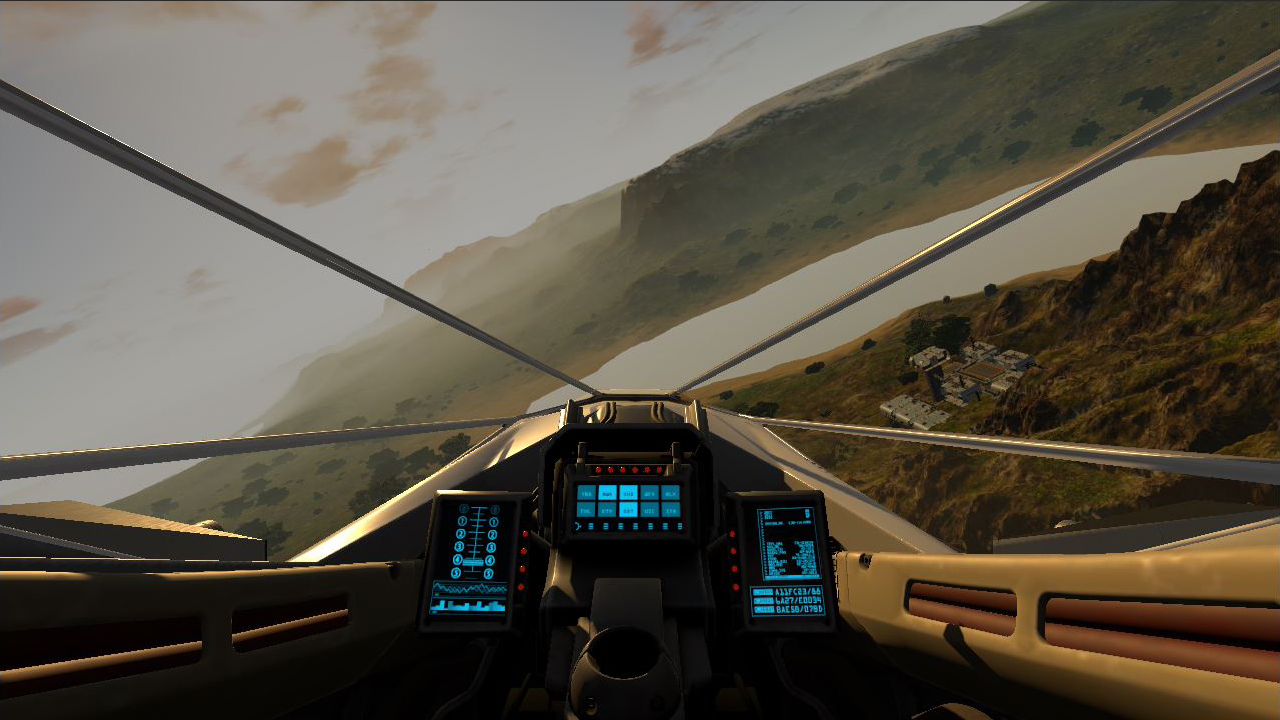 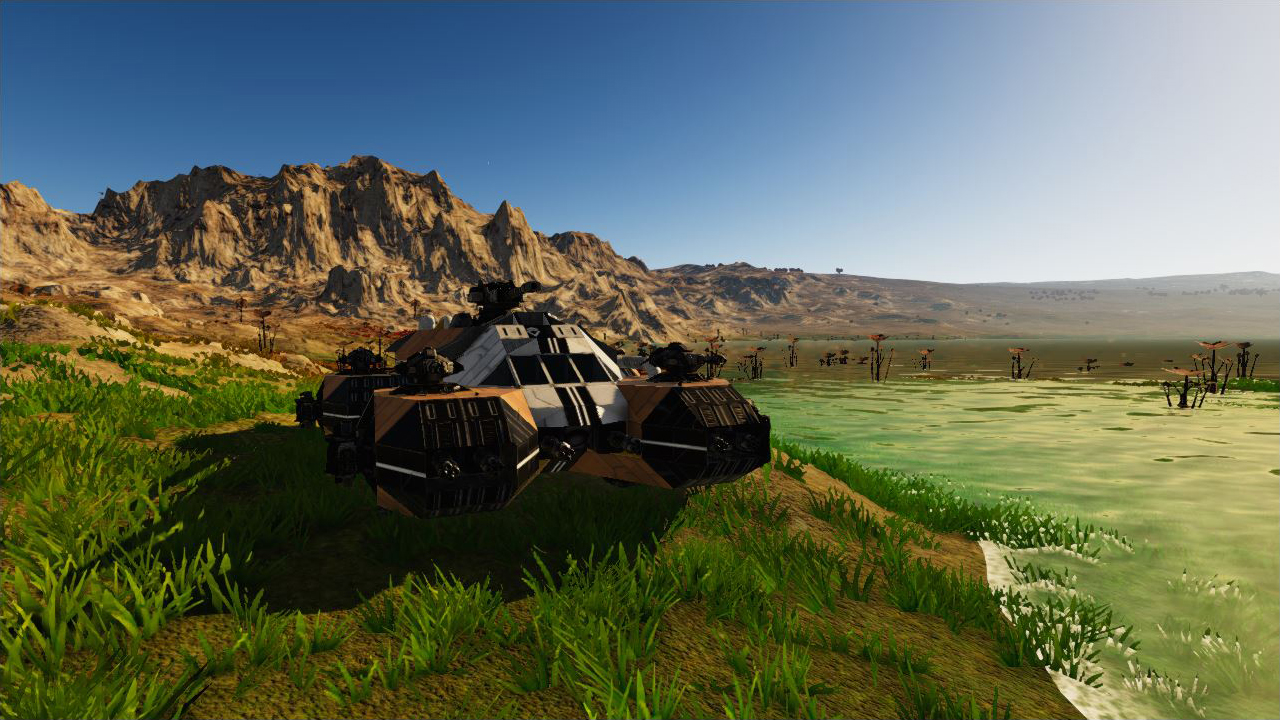 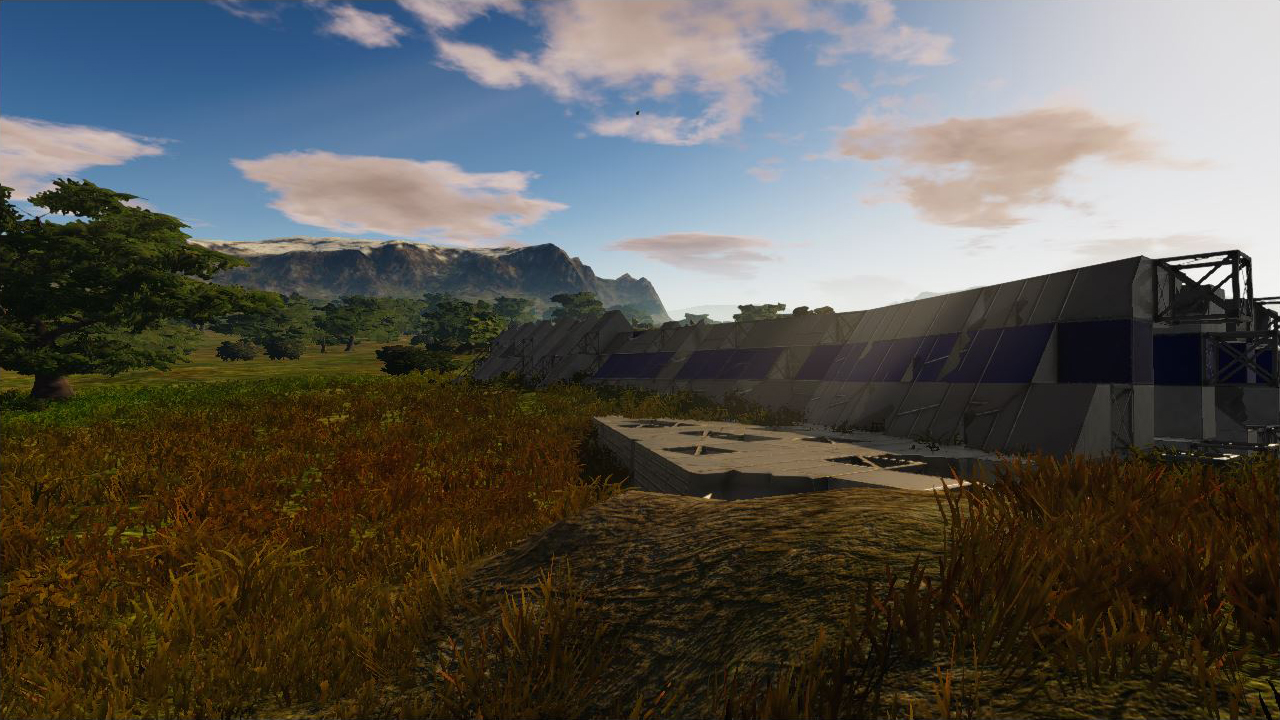 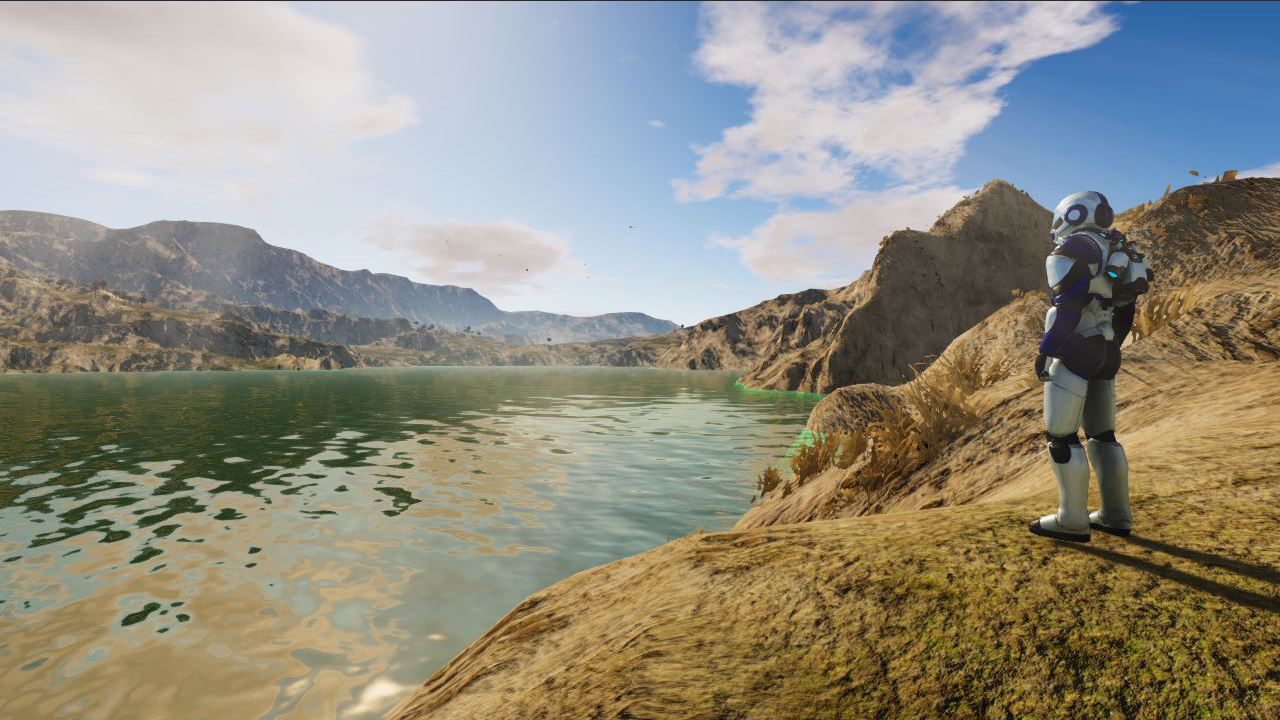 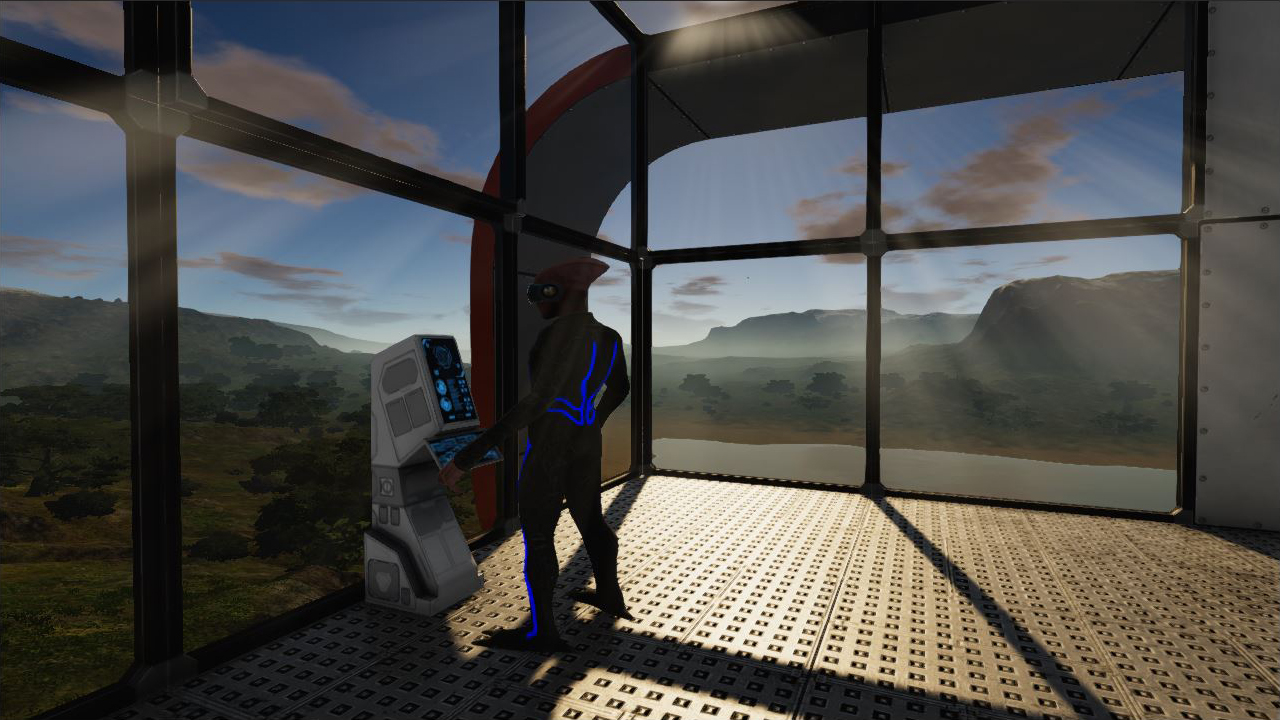 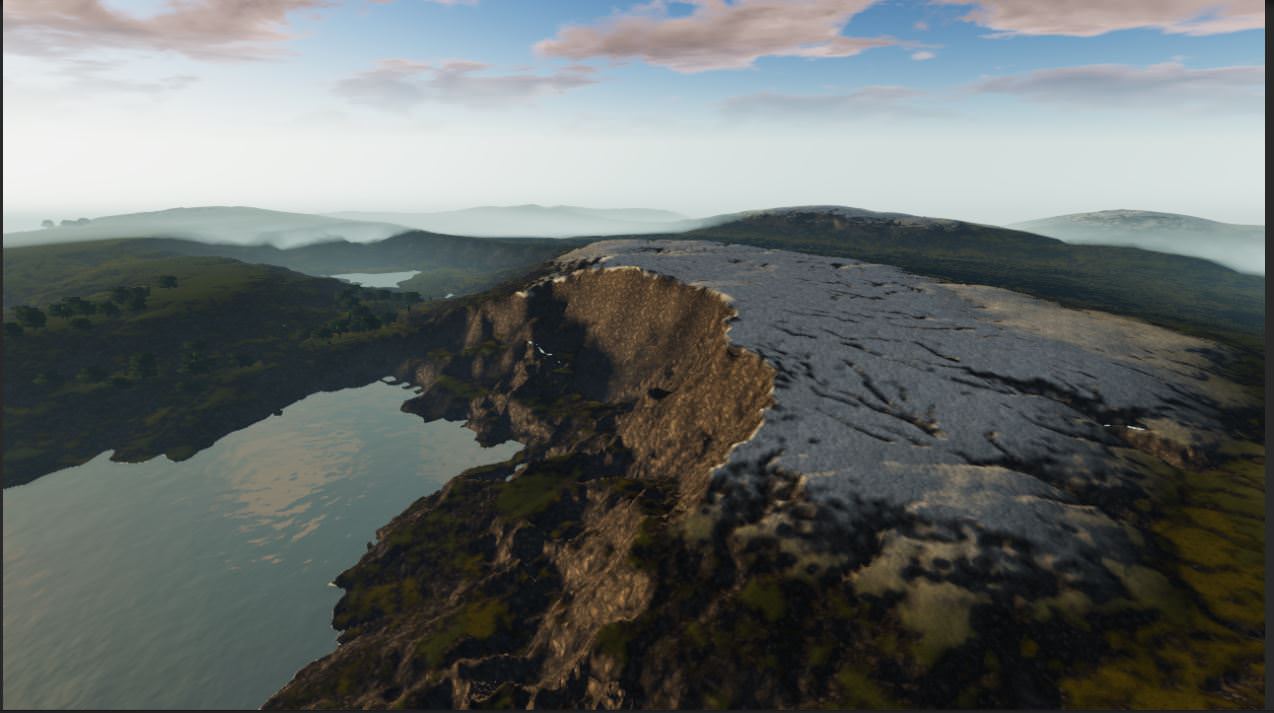 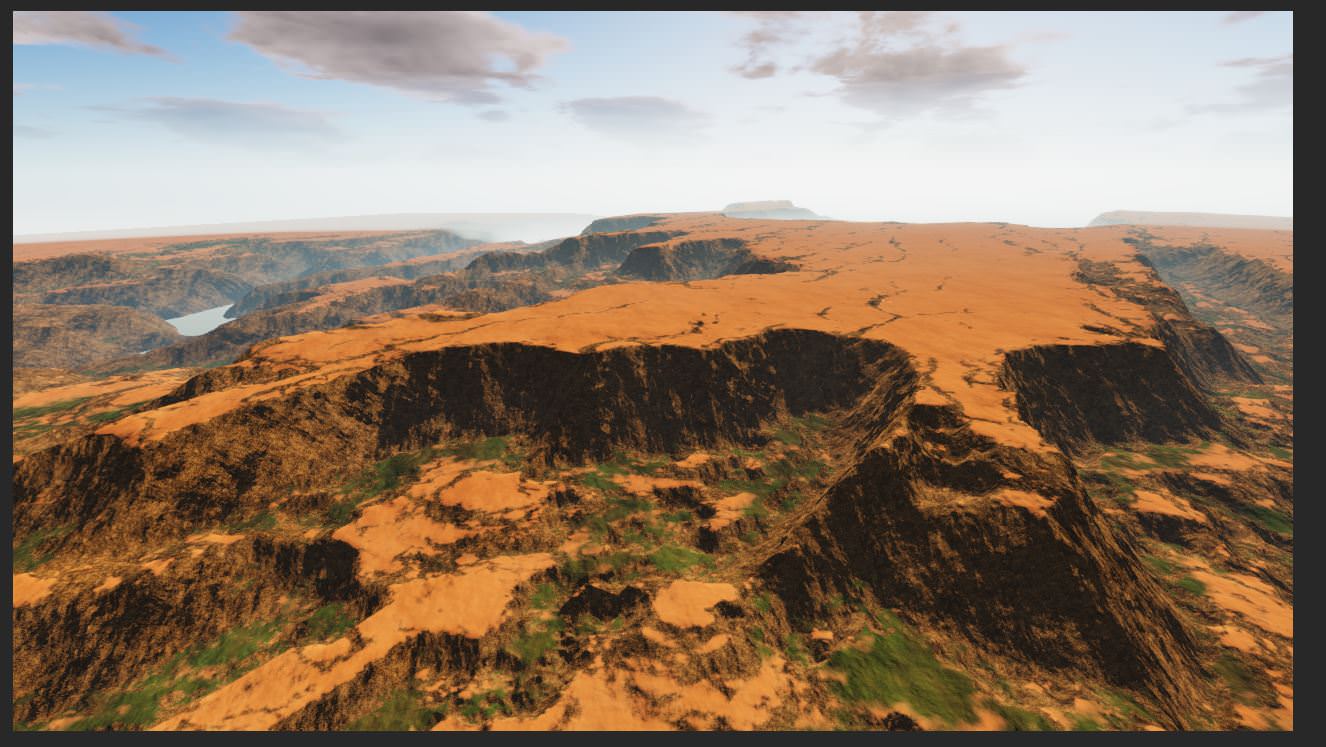