Melee multiwielding! Major plot events! Mouse UI++! Adjustable difficulty! Alpha 14 is here! The second half of that "new narrative" introduced with Alpha 13 is now in place, and we're getting awfully close to 1.0. Only one more map remains... (plus a bunch of other non-content-related prep work.)

In related news (because it happened immediately after releasing this update :P), Cogmind has been Greenlit! Check here for more info about what's to come.

A sampling of some of the new features included in Alpha 14 (the full image summary contains other relevant images that I've shown previously):

Attack with a lot of weapons at once, maybe even slice through one and just keep on slicing, if you're good enough :) 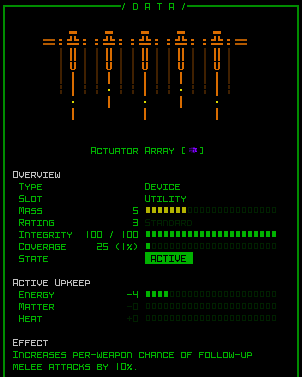 Unstable machines detected by a Structural Scanner now have an on-map counter showing how many turns remain until they'll explode.

The Structural Scanner now has a fifth ability, highlighting areas that are susceptible to cave-ins due to instability.

Guided waypoints can now be redirected more easily across multiple shots, with the line of fire always being recaculated from each previous waypoint as it is updated in keyboard mode.

Waypoint sets are also recalled automatically even when guided volleys are interrupted by direct fire.

Line of fire is now recolored on the fly as weapons toggled on and off while in firing mode might affect the volley's capabilities.

Hacking feedback now includes the potential for hackware destruction (it's not super common, and this was always intended, but it never happened due to a bug, now fixed).

Mouse users now have access to automated/smart inventory management via a simple left click when with a full inventory.

Mouse users also get new "[CYCLE]" buttons for propulsion and weapons to simultaneously toggle all their states.

The mouse cursor has two new hiding options, for example it can be hidden while you're attacking, so it's easier to see what's going on (especially with small tile sizes).

Or hidden during all attacks, and basically whenever input is blocked.

Right-clicking anywhere outside FOV automatically pans to that location.

Mouse users can also interact with empty equipment slots, left-clicking to bring up a list of all applicable items for that slot. 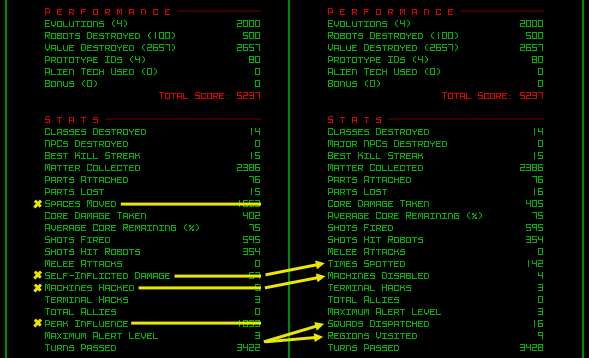 I changed a few of the stats shown at the end of a run.

To help collect lore, NPCs with dialogue you've already seen is instead marked in gray.

If you've already confirmed via a previous hack that there are no branches that lead out of the current map, calling up exit labels will remind you. 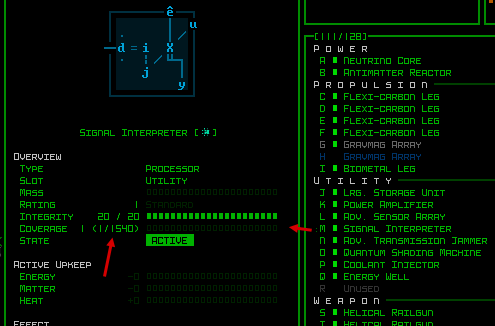 Fractional coverage reporting for those tiny items with < 1%.

Tutorial messages will flash for 5 seconds rather than 1 (maybe more people will actually read them? many are very helpful!).

Fantastic news, also gratz on getting greenlit, I've been following this game for ages and know how much work you've put into this, very happy for you :D

Thanks Omegakill! Years and years, hehe... The end times are within sight! Actually, this week I was quite literally working on the ending animations :P. The one that currently exists is only a small part of what it should be. Of course, still lots more stuff to add in, but I'd like to declare the story complete and showing the full ending is kinda important :)