Here is a summary with pictures of almost all weapons you will find in The Alien Wasteland, with their descriptions. Find out what's also new with the development.

This month, I have been working a lot on the weapons and I have finally managed to have all of them working and completed !

Without considering the grenades, the gas cans, etc, you will find 9 weapons in the game. They all have their own way of use and some of them will be more efficient during a specific situation or against one kind of alien.

PICKING UP THE WEAPONS

While a lot of weapons will appear through the game, remember that you can keep only four weapons with you ! One melee weapon (baseball bat), one pistol (revolver, pistol) and two heavy weapons (hunting rifle, machine gun, etc...) . This is why you will have to think clearly which weapons you want to keep with you. However, the weapons you drop on the ground will stay there and so you can always pick them later !

About the ammunitions, most weapons share the same one, but the same ammo fired with another weapon may inflict more damages, so use them smartly to avoid wasting !

The first weapon you will find in the game, it is useful to rapidly smash any aliens of moderate size who could have managed to reach you !

LIGHT AMMO A rapid semi-auto firing pistol with 12 rounds that can take few aliens down before having to reload. Great for getting ride of some roaming aliens without having to waste heavy ammo. 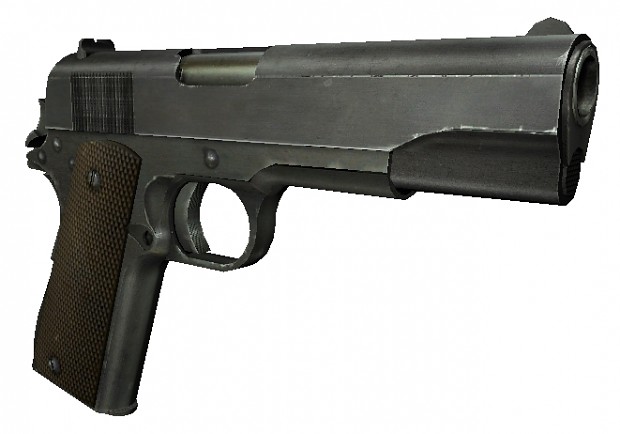 LIGHT AMMO Similar to the pistol but with only 6 powerful rounds, it is made to get ride of some bigger roaming aliens !

LIGHT AMMO A sub-machinegun with a high rate of fire but which inflict only small damages, it is mostly useful against large concentration of weak aliens. You better avoid using it on strong aliens because it would chew up all your ammo !

HEAVY AMMO A good old lever-action rifle with a capacity of 6 cartridges. While the rifle may seems too slow to be efficient because of the need to pump after each shot, it has a great accuracy, can inflict a lot of damages and can penetrate things and aliens ! It is meaning that if you place yourself where you have a bunch of aliens aligned, you can take them down with only a single shot !

This way, you can eliminate a group of aliens from a long distance, especially the spitter aliens who are attacking from long ranges.

HEAVY AMMO A powerful automatic rifle with a slow fire rate but which inflict a good bunch of damages. Much better for concentration of strong aliens, there is however a big recoil so you need some skill to handle it efficiently. The fired bullets has also some penetrations abilities.

BUCKSHOT AMMO A pump shotgun which fires a very powerful shot on a small and accurate radius. The spread of the leads is reduced making it a great weapon against strong aliens at middle range. It is also very efficient against compacted groups of aliens since the leads has also some penetration abilities.

HEAVY AMMO A machine gun with a large camembert magazine. Just fire and spray ! It is efficient at almost any situations but it does require a lot of ammo and the bullets doesn't penetrate aliens.

Hehehe, this one I would like to keep it secret because it is the last weapon you will find in the game. I can however tell you that it has big destructive abilities ! It allows you to get ride of entire waves of aliens with only few shots ! But it is not a rocket launcher

DEVELOPMENT OF THE GAME

So now, what about the development ? It has made a great progress and the game is more and more approaching to it's final version, ready to be released to the public. This is why the next news will be the video trailer of The Alien Wasteland !

But before this, here are the major tasks to be done :

About the possibility of having support for multilayer modes, especially coop mode so you may fight the alien waves with your friends or people on the Internet, this is something I am very interested in but if I start working on it I won't be able to release the game at the end of year.

This I why I plan to work on it and add it as free update after the game has been released ! So you guys can have some training before jumping on the multi !

Thank you very much for having read this news to the end !