Share the thoughts of designing the spaceships in ALIENGINE and showcase of their 3D models.

It has been more than a week since the last update as we are busy on preparing all of the stuff before game launch on Apple App Store. We will immediately let you know once the official release date is confirmed.

Last time we have shared the creating process of characters in ALIENGINE and we hope you all feel good about their looks and designs. 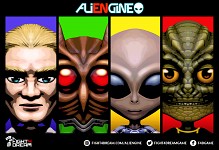 For this news, we will focus on sharing the thoughts of designing the most important element in ALIENGINE: the spaceships.

Since we got 4 different alien characters and it's easy to know we got 4 spaceships as well. The first one will be the default spaceship (every player can use it directly in game) and it is certainly belongs to our famous alien Grey. We designed this spaceship mainly with curves and arc as we wanted to have a streamline feeling. We chose yellow (a little bit orange) as the main color as the spaceship needs to be sharp and eye-catching in space area. Yes, the color matchup may also lead you to imagine a New York taxi traveling in space, ha. Here is the 3D-model for the spaceship of Grey (Early version): 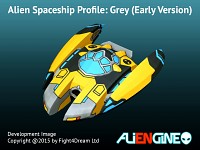 After making the other 3 spaceships later, we found that the early version of this spaceship is relatively dull on details and color pattern. We decided to repaint and added more details on the final design. Here is the 3D-model for the spaceship of Grey (Final version): 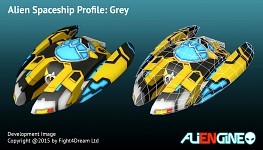 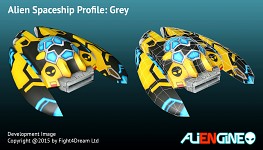 For the 2nd spaceship, we designed it completely opposite to the Grey spaceship. There is no apparent curves and arc on this spaceship, instead, many sharp edges can be found on its model. As alien Nordic somehow looks like human, we also design the spaceship with more human flying vehicle concepts. You can imagine it as the human aircraft created after 30 years. Here is the 3D-model for the spaceship of Nordic: 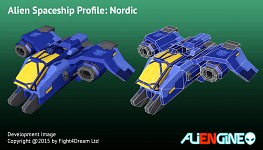 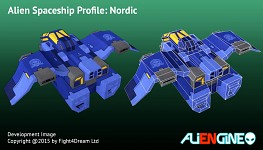 Now we go to spaceship of Reptilian. This time we want to create a spaceship with faster speed and it's normal to associate with powerful engines and boosters. Two big engines were located in front and it's look like they are pulling the spaceship main body every time when it moves. Wings and main body are relatively small in order to emphasize the scale of engines. The overall design and red color base should give you an aggressive feeling which match our normal impression on alien Reptilian. Here is the 3D-model for the spaceship of Reptilian: 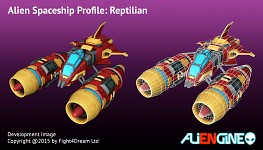 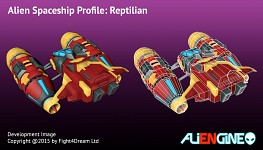 For the final one, it's definitely belongs to the remaining alien: Mothman. Most of the images available described Mothman as a creature with big wings and hence we would like to put this feature in to our spaceship design. 2 pairs of big wings with sharp angles placed around the main ship body and we hope the overall design can give you an insect-like feeling. The front part of wings and the cockpit formed a converge channel for the laser cannon and hence it has the best attack range among 4 spaceships. Here is the 3D-model for the spaceship of Mothman: 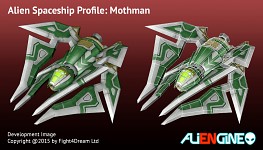 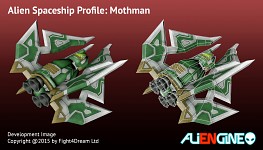 You may have found it from our previous videos; each alien/spaceship set will have their own space background. Moreover, as mentioned before, each spaceship has different ability values which suit different style of players. Each ship has 3 types of ability scores: Moving Speed, Attack Frequency and Attack Range. 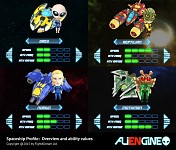 As our default spaceship, Grey has average but all-around ability with total score of 6. Nordic spaceship has a higher attack frequency than Grey with total score of 7. Reptilian has the highest moving speed thanks to the big engines while Mothman spaceship has the longest attack range. We hope each ship can provide players more choices on how to play better for this game but at the same time they won't destroy the game balance with total ability scores in check (6-7). We have fine tuned their actually performance in game many times to make sure they works as expected. Hopefully there will have more new alien pilots and spaceships coming in the later game update after launch (best wishes).

Hope you all enjoy this sharing on our spaceship creations.
Don't miss our next news update in the nearest future. See you all.