The first of the new Alien structures, The Harvester, is revealed! Also, Max continues his Q&A with fans, this time discussing the Cinematic Editor, glass, and water.

This week we've decided not to release a patch for the Spark toolset. While this may be a disappointment, rest assured that it means we spent 100% of our time this week making the game better (and playing ping pong).

Sensing this day would come soon, we've changed the format for our Friday updates to include different types of updates. This week we have a look at the alien Harvester and the second part of the Spark Q&A.

The in-game footage we released last week included a brief look at one of the alien structures. Even though it looks a bit different than its Natural Selection counter-part (and has a different name), most people correctly identified this as the resource collecting Harvester. 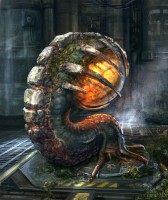 The Harvester serves the same role as the alien resource tower in Natural Selection; the alien team builds these structures on top of nozzles in the level to gather resources. When designing the look of the Haverster, we wanted to retain the bulbous-ness of the original while incorporating the new visual style of the alien species. The bony growths, glowing sac and finger like tentacles are recurring themes in the alien designs. While we want the Harvester to feel like a living part of the alien ecosystem, it was important to make sure that the structure didn't look too much like a playable character.

Two weeks ago I started a series of questions and answers about the Spark engine. Here are a few more answers to questions I received.

Graham asks: Will we see water and will we see glass? If water will it be a simple implementation akin to what we saw in the HL1 engine? Same for glass?

You won't see glass if it's exceptionally clean.

Translucent surfaces are one of those things that are a real annoyance to graphics programmers. The reason is that most of the tried and true techniques for creating an image on the screen don't work that well when you can see through something. This is especially true with a deferred renderer like our engine uses. The common solution is to have a separate rendering path for translucent objects, although some recent games use interesting alternatives.

One of the challenges of developing technology in parallel with a game, is that invariably some engine features will have to be postponed until late in development. Ideally these features will be the less important ones that don't hold up anyone's work. Since glass is not very prevalent in the Natural Selection 2 universe, it doesn't really affect the playability or the look of the game very much. Thus we haven't implemented it yet, but we will!

Water, on the other hand, is not planned for the initial release of Natural Selection 2. With a small team it's important to pick your battles, and water just wasn't important enough to justify the development time. Eventually we'll add in water for mod makers, but that will be post release.

Matthew asks: How are sky boxes handled in Natural Selection 2? Will we have to make a box around our level?

A sky box is a common technique used to draw the sky and other very far away things. The way this is done is by creating a big box with images of the sky mapped onto the inside faces. The box is rendered so that it's always centered on the viewer. This prevents you from getting closer to the sides of the box and is important for maintaining the illusion.

The Source engine supports "3D sky boxes," which are conceptually the same idea but it can include models in addition to the box. These models might be things like far away buildings. In theory these buildings could be painted into the sky box, but having them rendered and lit like the close up geometry helps to integrate them and sell the effect. It also allows them to have dynamic lights, particles, animation and other interesting things which wouldn't work in a static image.

With that in mind, we decided to build sky boxes for our engine using our Cinematic Editor tool. We haven't released the Cinematic Editor or discussed it much, but you've seen some of what it does. It was originally created to build movies rendered with our game engine (namely the teaser video), but we later realized it could be used for other things; namely particle effects and in-game cinematics. In the Cinematic Editor you can place cameras. models, lights and particle emitters that can all be key framed to create animations. Certain types of objects can also have events attached to them, like playing an animation or sound effect on a model or shaking the camera. 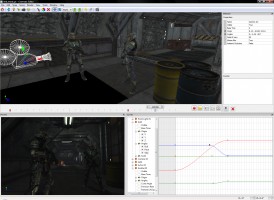 So sky boxes in our engine are just cinematics that are rendered with the viewer at their center. This means a sky box can include all kinds of complicated things like you saw in the teaser video. We just added this to the engine recently so we haven't explored it too much, but I expect it will be fertile ground for modders. Once a "sky cinematic" is created, you just place a special entity in the Editor and specify the file name of the cinematic.

For those of you that have been eagerly awaiting part 2 of my blog post about the effect editor, wait no longer! The Cinematic Editor grew out of some of the early work on that tool, and quickly superseded it.

I still have more questions in my queue, but if you something you'd like to know about the engine, editor or anything else related to the technology of Natural Selection 2, feel free to e-mail me at max@unknownworlds.com.

does that mean that a modder could make it so that every so often on a map something would happen in the sky box? Like perhaps have some ships fly by, or even something more complex like a space battle going on (although i'm aware a space battle wouldn't fit the game universe) But you know what I mean, have things happening in the sky box.
and if so, then could it be attached to the game itself somehow? like if the aliens are winning you will start to see ships evacuating the planet (or if you are in space something similar that says "You are losing.") and vice versa, like when the humans are winning ships (holding reinforcements I guess) show up.
Idk, perhaps i've completely misunderstood what this is about (i'm not really a modder, just a thinker) but if using a cinematic editor would allow stuff like that... it'd rock.

From what I read, I think thats possible. If I am not mistaken.

I've seen some simple things on cs:s maps in sky boxes that move. For instance, in one scary themed map, a huge zombie would appear outside the main house in the map. It was just a normal zombie in the skybox but I think something like it could be used for space battles too.

I love the design of the Harvester.

First, it doesn't make much evolutionary sense. Why would a worm-like creature hoist itself into the air like that, needing constant effort to stay upright while fighting against a raised centre of gravity? Coiling around on the ground is more logical.

Second, the model is overly simple: I see a tube with a blob at the end and some fangs. It doesn't match the amazing player models at all. I don't think the opaque sac is helping matters either, though since it sounds like translucency is an upcoming engine feature maybe that will change.

at Varsity. You realize the aliens are not from earth, hence aliens. Maybe their planet has less gravity and it doesn't take much effort for them to stand upright. And then later on they evolved after invading other planets to stand upright even within gravity forces like ours. Maybe they were originally under water creatures or hung from ceilings or lots of other things. They aren't mammals and they aren't from earth.

I have to agree with you. Altough the whole evolutionary thing doesn't concern me, the model is too simple. It just doesn't fit into the natural selection design. Even the resourcer tower from the first natural selection had a cooler design. I love the character models, but this just doesn't stand in the same line with them. :(

The harvester sort of grosses me out, but its pretty sweet.

I'm amazed and excited for the design and creativity of the harvester but in some ways I'm confused to why it was made so it is pushed off the node as if there's a few maps with small rooms that surround the harvester as it may block onos's and such from getting past.

I prefer the original harvester.

This one reminds me of something out of R-type, but that's not a bad thing by any means! XD

Looking very nice. Altho I like the harvester's design, it looks slightly too artificial atm I think. Maybe because of the spheres to glossy and has no normalmapping.

Nice design, try giving it a 'living' feeling. Like breathing, regorgitating (is that correct?) or even some shudders- shaking

Well, regorgitating isn't a word. <_< But uh... Did you mean regurgitating?

That would be very strange, if it regurgitated! But anyways, it looks like it's living to me because of the the breathing idle animation, in the video.

I'm not really liking the animation on that thing.

I think the problem is that it look like a giant marble, rather than something organic. It needs to be semi transparent or something

(and yes, i heard Spark engine has trouble with transparency, but my point still stands)

Kind of makes me hungry. I could go for some eggs now.