There are some new things on the horizon for Alien Arena 2010, including a brand new model format, soft shadows, and more!

Version 7.40 of Alien Arena was very stable, perhaps the most stable release we've ever had. In the two months that have passed since it's release, we have had virtually no signifigant bugs to speak of, and that in and of itself is somewhat of a milestone. So what have we done since? Yup, dug in deep, and have started working on some major, renderer ripping-up type features!

The first aspect we really wanted to improve, and finish off once and for all was the shadow system. We've been playing around with shadowmaps and stencil volumes for some time, and in 7.40 we wound up with a combination of shadowmapping and stencil volumes that worked well for our purposes. The problem was though, that shadows were hard-edged and still looking alot like the old Doom 3 style shadows, and we wanted soft, natural looking, but still fast rendering shadows. So now we have implemented soft shadows still using the combo of stencil volumes and shadowmaps. 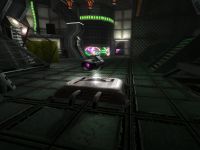 As you can see, this is done for both dynamic as well as static shadows for both entities and world geometry. Entities are also self shadowing, and can cast shadows on other entities.

The next feature was to implement a new skeletal model format. We implemented the new InterQuake Model format designed by Lee Salzman, which is now in use in Sauerbraten, and is in the process of being used in Darkplaces. This was a good deal of work, and is ongoing in fact, but the advantages over the old .md2 format are tremendous. Not only do the models look vastly better(and lose that awful vertex swim), but they render faster as well. This also will allow us to do things down the road such as ragdoll physics, and other animation features. Skeletal models use a much smaller memory footprint than vertex animated types such as .md2 and .md3, so if your system has a decent CPU, you should see some nice gains. In our tests we saw models rendered between 50 and 75 percent faster.

Again, you can see here that the model renders alot nicer, and actually looks the way it was meant to versus the badly deformed .md2 meshes. On top of this, we also made a few changes so that we could use newer compilers, which also resulted in a nice boost in performance.

There have been a number of other things going on as well with the game. As many people may know by now, our EFNET IRC channel #alienarena was banned from a number of servers. This included our default servers for versions of Alien Arena prior to 7.40, so the best way to connect is to just use a client such as KVIRC or IceChat, and choose the round-robin irc.efnet.org method. Because of this, we have set up our own server (irc.planetarena.org) and will migrating to that in the future. The EFNET channel will remain for a period of time, but will eventually be shut down once the new server is solidified. In community news, there are two ongoing summer tournaments, Summer Frag and the Iron Man 1v1 ladder, both of which are very active and fun. We also continue to run our weekly instagib and deathmatch tourneys, on Tuesday and Sunday.

We expect to release sometime this summer, after extensive testing of the new model format and some other things that we are working on. There is alot of work ahead of us to convert and re-animate all of our player models to the new format, and alot of other engine-related things we want to get done, to not only make the game better, but also to make the engine more usable outside of Alien Arena.

Lastly, Alien Arena has a chance to be voted onto a digital media distribution disc, so if you really like the game and would like to show us some love, please vote for us on this survey: Digitalmancompetition.wordpress.com

Thanks, and until next time, Happy Fraggin!

is this mod Active online? ;)

and also, this has obvious better graphics then the quake engie you working on but would a old comp handle this game Really good, not that i got an old computer but still..

Yes, this game can run on most computers, just turn the graphics setting down.

it has come a long way since back when I played it at lan parties! Good job!

Its a nice game !

I want another SP game from you guys! :)

We still support the .md2 format, so users can choose between the two. Also the client can switch to the old .md2 format(provided a .md2 exists for that entity) using the r_legacy cvar. There are some things I'm going to improve with the .md2 format that I learned while implementing the .iqm, and I'll probably throw in .md3 support as well since those can be loaded in the same manner as .md2 can.

As for a SP game, hehe, well maybe one day, I certainly won't rule it out :)