The official trailer has been updated for 2010, and there is news on the upcoming release of Alien Arena, as well as some community notes.

Alien Arena 2010 is set to be released in less than two weeks, barring any setbacks. Yes, you read right, we have returned the year suffix to the name, after receiving a large amount of support for it from the community, as well as outside parties. We expect this to be a very significant milestone in many ways, and the changelog is really going to reflect it. With that in mind, I personally decided to redo our official trailer for this version using the newer renderer, maps and weapon models on some of the same demos and flybys, while adding a few new ones.


I'd also like to take some time to address some issues that current players might be experiencing. The default IRC server for the in-game and Galaxy client, irc.prison.net, has either begun blocking our clients, or having problems of some type. The bottom line is that you cannot connect to #alienarena@efnet.org using that server at the moment, and perhaps permanently. Choose a different server in Galaxy(irc.easynews.net seems fine), and in the in-game client you can just put in irc.efnet.org in the irc server section of the menu.

Currently the Alien Arena community is highly active producing 3rd party content for the game. A new site Code.google.com which is being run by Cheney, Blindman, Xenos and Shellshocked, has created some insanely cool new maps, as well as some new Alien Arena utilities, some of which will be finding their way into to official installation of the game.

As mentioned in the last news post, we've spent alot of time on the renderer(as always) and have not only gotten it to look better, but it runs better too. Here are some updated shots of Dm-deathray and Dm-purgatory to illustrate just how far we've come in that regard since our initial release in 2004. 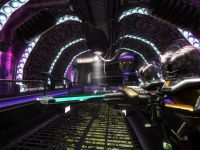 We don't expect development of the game to slow down at all. Even though we are packaging up the game for release this week, we are already making plans for some major new features that will be implemented over the summer. I will try to keep these news updates coming, and make some new videos and media to demonstrate our progress.

Awesome. I'm just wondering, though, Will you ever fix the mesh deformation when the character moves? It was something in Quake 2, and it's still in Alien Arena. It makes the characters look like jello. But still, nice job. Can't wait for the new version.

Yup, we are going to be implementing a new skeletal model format over the summer :)

I notice that in every announcement you claim that the game runs better, but I've never seen any improvement. I agree that the game is beautiful, the art style is refreshing and it is dripping with style, but when the framerate drops like an obese woman having a heart attack there's no real reason to even bother playing. I'd love to play this with the same silky-smooth FPS I play most games with, but I don't see it happening.

I've probably asked you before, but what are your specs, drivers versions, etc? There should be improvement.

That video, never drops below 30 fps even while using FRAPS(which sucks down performance), and it's on some pretty modest hardware (2.8 ghz dual core, NV 9800GTX). So if you're getting bad frame rate drops, it would be useful to know what hardware you are using, and what settings you have the game on.