This message to show all that Im currently revamping my ideas and story for Age of Titan. Attached images are my ideas.

Hi to all, after I started with my Age of Titan modding, I feel that it is not wise and nice if not having a proper and thorough planning on how the map should go and the events, skills and so on..

I would to take this opportunity to say Thank you to Digi_Byte for telling me that his experiences on modding. So I make up my mind on revamping all of my Age of Titan's idea and came out with the new ideas.

Below are the new ideas that Im going to implement on Age of Titan's map modding. 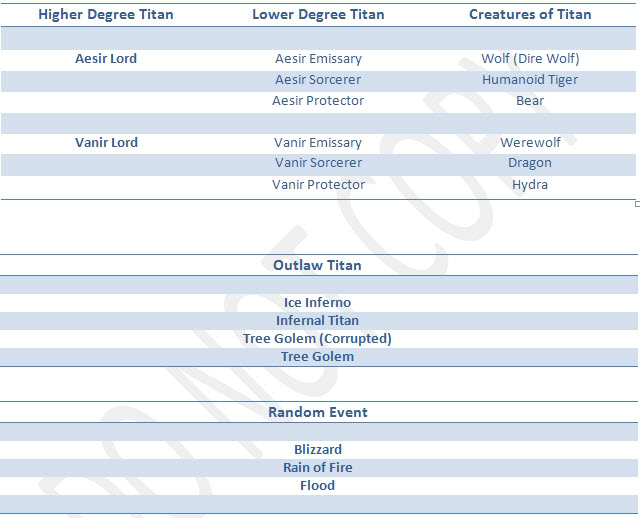 Creatures of Titan
- Support Unit
- Can be summon out from the Summoning Tower
- Limited one per type
- Wolf (Dire Wolf) and Werewolf serve as Attack Unit.
- Humanoid Tiger and Dragon serve as Healer Unit.
- Bear and Hydra serve as Aura Support Unit (add Movement Speed, Attack speed and Armor Rating)

Transformation Event
- Quest Achieved Event
- Occur when players defeat 3 Outlaw Titan and obtain the Essence of Infernal Titan
- Players able to transform into a Titan Hero with special abilities for a period of time.

*All units will be reskinned and new models will be included in this mod.
*The italic word will be buildings that is important for both faction.
*The red word will be the Quest Item that need to obtain.

I will posted up the few of reskinned units here later.
So please let me know what all of you think of it... Constructive comments needed.