The second update for the Age of Darkness mod is here. In addition to new patches, it also introduces more units and buildings to the original Age of Darkness.

The period between the two world wars was dominated by one leitmotif that well stretched into the 90s: the rise of Communism and its influence on the globe. Unsurprisingly, Communism faced vigorous resistance in both east and west, and for decades, most conflicts in the world were dominated by the advancement of Communist regimes and resistance towards them.

Naturally, the rise of the Soviet Union resulted in a wave of reaction and retaliation in eastern Europe, resulting in the Polish-Soviet War of the 20s, as well as the Winter War with Finland and eventually Operation Barbarossa. Thus AXP2: White Terror expands pre-existing factions with further content, and introduces new units to flesh out several factions of this period - namely Finland, Poland, the Oslo Group, Germany and the Soviet Union.

Each update installs as the public beta version (note: both hyperlinks below run through adf.ly)

For installation instructions for Steam, please consult the Age of Darkness Wiki.

Once the nucleus of a vast empire stretching from the Elbe to the Dneipr, Poland has now been finally liberated after 3 centuries of by the Austro-German-Russian triumvirate. It is, unfortunately, like many East European nations, an agriculture-based economy, but that does not mean that Poland cannot hit above her weight -- she too is a cultural powerhouse, like Argentina, and can perform wonder rushes when properly endowed, and is meant to win via small-scale early wars and diplomacy.
The army of Poland is very much suited towards this approach, consisting of early game horse cavalry, as well as its own brand of armour and anti-armour, most notably the 7TP light tank and the wz.35 heavy rifleman.

Unique upgrade of Renault FT-17 for Poland which privileges mobility and affordability at the expense of tactical strength.

Unique Polish upgrade for Carden-Loyd. Is faster, sturdier and armed with a 20mm gun, allowing it the ability to suppress both infantry and light vehicles alike.

Like the Republic of Poland, Finland was one of the "Children of the Great War" -- the many nations born from the collapse of Eastern European empires and the Versailles Treaty. Sporting one of Europe's most pristine environments means that the Finns have a marked propensity towards guerilla warfare. Although their equipment consists primarily of German designs, they do have a few unique units of their own -- the Lahti L/39 heavy rifleman is one such unit.

Long-ranged infantry gun, ideal as early anti-materiel support. Has a better rate of fire and can be used to engage aircraft, but must be deployed prior to firing.

The Oslo Group consists of a loosely affiliated bunch of economies scattered throughout Europe, led mainly by Switzerland and the Scandinavian nations. Understandably, a lot of the equipment they receive tends to be produced primarily by Switzerland and Sweden, consisting of units such as the S-18/100 heavy rifleman, and the Strv line of tanks.

Anti-materiel infantryman armed with a heavy rifle; his main draw is that he has a cost structure that sacrifices Wealth in favour of savings of Metal and Food. The weight of his weapon makes his somewhat slower than other units armed with, say, the PzB 39 or the Boys AT Rifle, but he can certainly provide a punch whereso needed. Just don't expect him to perform well against late-game armour.

Unique Oslo Group medium tank unit. Comes one age later than usual, but has better firepower, speed and durability for its cost.

The vast size and sheer scale of resources of the Russian hinterlands were all that stood between retaining influence and sliding into global irrelevance following the civil war of the 1920s, and as befitting its role in this turbulent period of history, Russia sports a vast plethora of units which combined with its own innate cultural bonuses are all about controlling and defending a vast land-based empire. Even before the Great Patriotic War of 1941-5, Soviet Russia was one of the world's biggest aficionados of mechanised warfare, and as a result like Germany has a unit for almost every land-based unit track for every tech level of the game.

A primitive replacement for armoured cars, the Tachanka is a useful unit that can be used whenever access to a Munitions Plant is lacking. It combines the lethal power of a machine gun with the speed of a horse, making it ideal for raiding and attacking lightly armoured foes, but extremely fragile if attacked by units using heavy rounds, such as artillery, armoured cars or tanks.

The arch-nemesis of Russia in the Spanish Civil War and the Second World War, Germany now receives more units of its own in the White Terror x-pack, including her heavy tank line, an upgrade to the Feldkannone 7.7 FK 96na, as well as a warship to boot.

Tiger I and Tiger II 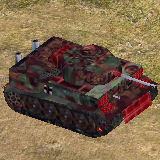 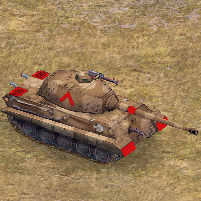 Be it as it may, however, the White Terror x-pack doesn't have upgrades exclusively for these factions alone. Other factions and units have also been introduced - it's up to you to discover them =) 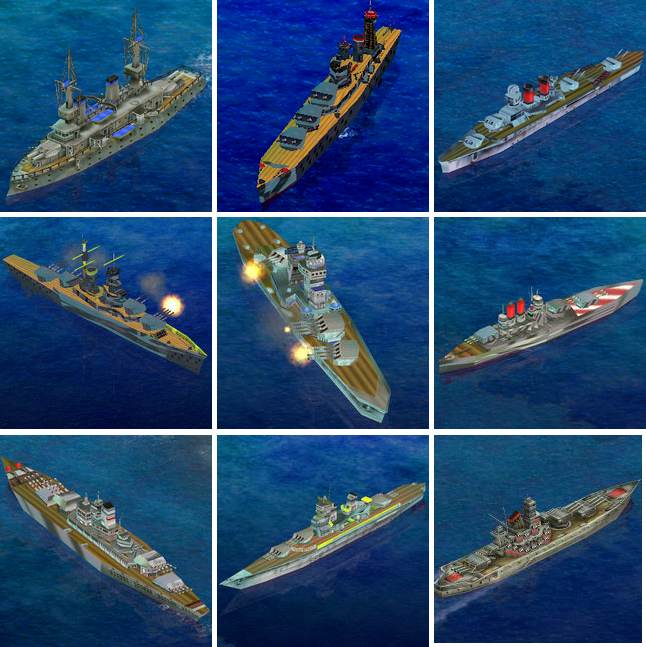 With AXP2, the entire naval tech tree and building hierarchy has been changed, with various tweaks to heavy shipping. Some rely heavily on heavy surface shipping, while others can build only battleships, or none at all. At the same time, submarines and battle cruisers have been expanded upon and reworked.

Additionally, Machine Guns have been reworked, ensuring that they now have a faster deployment rate compared to conventional field guns. Generals too have been reintroduced into the game, and should be playable in this rendition of Age of Darkness.

Battleships and capital ships have now been reworked, with Battleships being an upgrade of Cruisers (you get the faster and more powerful Battle Cruiser as a separate unit). The Battleship is essentially a refurbished WW1-era warship that serves in the role of shore bombardment and surface supremacy.

The Battle Cruiser is very much a medium-strength vessel. It's not as powerful as the Battleship, but has one very special advantage: it is a very efficient at anti-air combat, but virtually useless against submarines. Therefore, escort vessels such as Destroyers and Coastal Motor Boats should be used as sub killers at all times.

Capital ships aren't an upgrade, but are a super-unit that is in essence a more powerful bombardment unit, tactically stronger with better range. They're basically the cornerstone of your fleets, with extensive LOS, allowing them to function as command vessels. Use these units to batter enemy installations wholesale with their powerful heavy guns, but beware of bombers and submarines. These units are costly, however, so never let them sail unescorted.

There are now two tiers of Submarines for major factions. The simple Submarine is actually a stealthed torpedo boat that isn't visible when not moving, but the Advanced Submarine is an upgrade that replaces it with a fully submersible ability, along with better range, speed and armour. However, getting your submarines won't be easy — players will discover that Polymers and Refrigeration are required in order to access this secondary tier.

The USA and Germany have a premium on submarine warfare owing to two new units introduced. For the USA, the Balao is a cheaper and more economical replacement for the Advanced Submarine, while the German Type XXI forms a "third" level of Submarine that is tactically more efficient, but comes at a higher price. So while Germany continues its "'let's spam-build Anchorages to raise a sub fleet", the USA relies on having more replaceable units, resources willing, in order to flood the seas with an undercurrent of torpedoes against its foes. 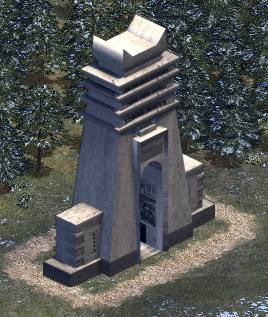 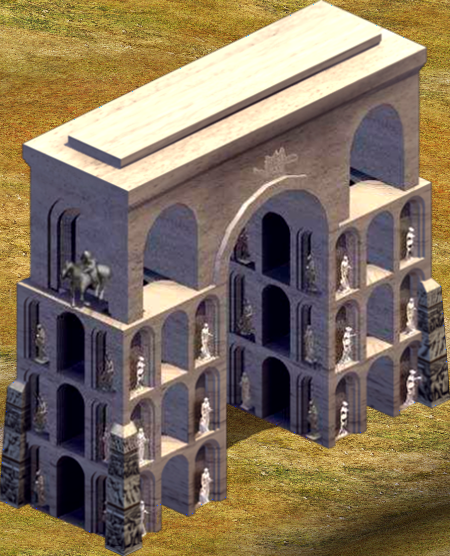 (Credits: Fierce War team for creating the Stalinist version of the Marble Arch)

The mighty Marble Arch makes its debut with Age of Darkness! a must-have for the up-and-coming power which dreams of overseas conquests and naval power, this is the perfect Wonder to assert your dominance and instill fear and awe in those who survive long enough to gaze upon it. Do note however, that workers' movements disapprove of imperialism and certainly won't hold with your attempts to create a new Roman Empire.

Marble Arches come in two different flavours: the one being based off actual Fascist Art Deco, and another that is more reactionary and restrained in appearance but no less extravagant and ostentatious as a symbol of power and militarism.

(Credits: RoXXGames for design of European and Soviet NRCs)

Too many sleepless nights worrying about the number of tanks your opponent's got? need a more solid component to your defensive plans? the National Redoubt Complex can help. in addition to boosting the power of your Fortresses further and providing field hospital facilities on site, the National Redoubt Complex is a powerful firebase that serves to protect and expand your borders.

Just make sure your enemy doesn't use flamethrowers, bombers, nuclear bombs or flanking tactics, and it will serve you will in no time, being extremely tough and resistant to anything your enemy throws at you .... barring the odd light tank rush that it couldn't block, of course. But there is a chance, they may be made to spawn tank destroyers.....

Unfortunately this mod is still a WIP, so if you do find an issue, please let us know by sending us a message here, or by writing to beelim_solutions@gmail.com. Let us know the map type and the factions involved, so we can replicate it quicker and thus resolve it as quickly as possible.