All thee who hath skill with blunt or blade enter, for thy glory awaits. 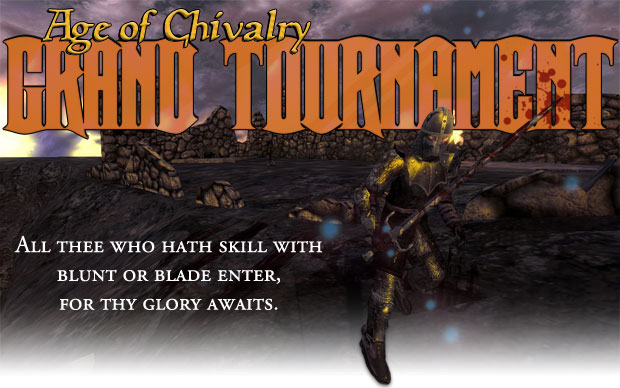 Looking back, it's been almost three years ago that Age of Chivalry was first released to the public. Since then, Chivalry has captured the attention of tens of thousands of gamers all looking to take part in first person medieval experience with an eye for authenticity. Whether its pioneering real-time melee strikes, implementing a full featured sound impact system, the unique story-driven multiplayer map campaigns, or a robust implementation of the Steamworks API, Age of Chivalry has been a project at the forefront of the modding community for some time now.


Team Chivalry is still working hard on improving their vision of an optimal medieval experience and there's a big announcement in the works. It's still not quite ready to unveil yet though, so we're putting together an event to help rejuvenate our community. Think of it as celebration of all things Chivalry and the beginning of another trip on the hype train. Next stop, big announcement – choo choo! Ok, maybe it's a couple stops away, but certainly after this event.

And the event in question? The Age of Chivalry GRAND TOURNAMENT! Think you can cut down the competition? Then prove it! This tournament will consist of two separate sections, Duel Competition and Clan War.

Entrants will have their choice of multiple time slots on servers based in both EU and NA. To enter, visit the official Age of Chivalry forums for full details. This is a friendly tournament; there will be no cash prizes but final winners will receive exclusive access to content detailed in our “big announcement” first.

Fight for glory, for the love of the game. But most of all, fight for fun! Age of Chivalry's Grand Tournament starts May 7th, 2010 so start practicing now.

New to Age of Chivalry?

Get started by installing our mod through Steam - it's an easy, one-click process. Then familiarize yourself with the game with the help of these handy guides:

You'll be slashing and smashing in no time!

Servers for this tournament are graciously donated by ConvictGaming.com

Looks interesting, id like to be on the Duel Competition...

Then I suggest you sign up on the site :P

sadly aoc lost all fun for me

Interesting... But well, I don't like how this mod works, I already played it and must say that there are many other medieval games better...

can someone explain me what's the difference between this mod and PVKII?
I haven't played any of these, but I wanna try em. Which much is better? gameplay / fun / teamplay / ..?

PVKII is cartoony, this is a little more realistic and this has more powerful weapons and objective gamemodes. Both are great, but I like this more, maybe because of better weapons.

I'd say PVKII looks much better but AoC is very epic to play. Maps like helms deep can be very entertaining.

I graduate May 7th :D

I love tournaments, they add a little more excitement for me.

very nice :)
And very good it will next week, Hopefully i get a new graphic card next week (Was delayed for the ash-cloud)...

I'll probably be signing up, I love AoC it's an amazing mod. It's nothing at all like PVK II. Each have completely different play styles and gameplay design.