On this devlog, we talk about many thing that we got done this past month.

It’s been a while since the last devlog! We’ve been working long and hard on Aftertile all this time, and I’ve got many things to show.

Basically, lots of things got done. I usually do not think from this perspective, but when I look in retrospect, I’ve made a bunch of assets and we’ve made around 500 commits this past month. Initially designed as a small game (it still is), Aftertile has proved to be a challenge in many aspects, and as a team of only two we have to solve them one step at a time.

As I told you, I’m taking care of the art, design, level design, story and UI. I usually split my time between those tasks, so I progress slowly but steady in each of them.

Taking the hook from my last post, Ghosty’s loops now are 60% done, and that counting the sprites we are still not sure if we are going to implement or not. From the ones that are strictly required, I still need to do the game over animation.

I can’t show all of the loops, otherwise it’ll be too much spoiler, but I can say that Ghosty has got a lot more personality now. For example: his hat now is not only a common ghost hat but a companion Eye-hat, that carries Ghosty through hard material, and Ghosty acknowledges this partnership:

I made the two generic NPCs, the big and small, and Fausto made a component so I can easily generate different colors for them. This way I can easily add variety to the NPCs.

The stages are a bit more complete now, as I've placed the collectible orbs and healing wells on them. I've used Super Tilemap Editor for the orbs as well, and I managed to build beautiful formations to be seen and collected:

I’ve also started and finished designing and animating the speech bubbles. I initially thought up of 4 designs, and ran a poll asking: “A ghost is speaking, and you hear its voice inside your head. If you could see the words in a speech bubble it would be like…” Most people chose the 3rd one, which was my favorite as well. I’ve animated the pieces and assembled them on Unity, and even made a mockup of how I want the text transitions to be. 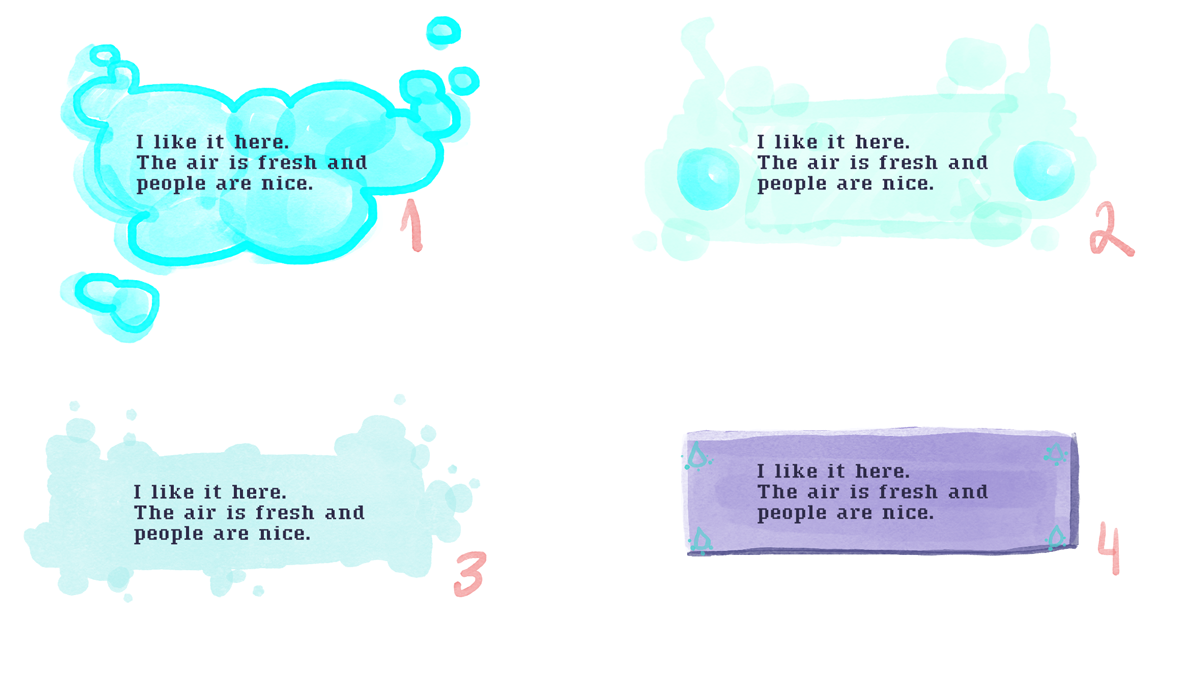 (BTW, the font is a custom font I commissioned from Chris W. Early. He makes great pixel work, and his fonts are great. If you guys ever need any pixel fonts, you should talk to him. Here’s his itch.io account: Earlygames.itch.io)

After that I concentrated my efforts into organizing the disposition of the NPCs and what they are going to say, including the special NPCs, the quest-related ones, the save points (which are going to be shrine maidens, more on that soon) and the special tiles.

Special Tiles, or as we are calling them in-game, bodhitiles, are entities/deities that guard and protect each stage of the game. I’ve designed them inspired by gods and deities from Shinto, Buddhism and Hinduism, according to each one’s characteristics and remarkable traits. Here’s the first one, that the player is going to meet at the very beginning: 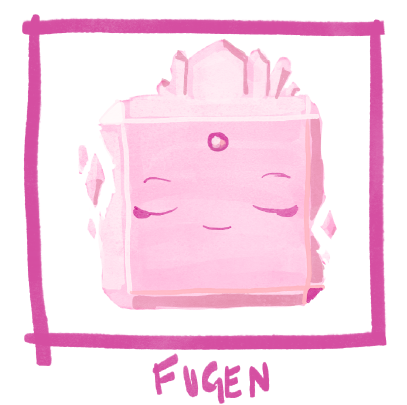 So far, almost half of the story is finished on storyboard and 1/3 of it is organized in events with ID and specific dialogue lines for each character.

Level-wise, I’ve devoted a bit of my time into making the interior of the walls more convincing in terms of what I want them to be: I wished for them to be filled with ectoplasm, as the concept of the Ever-floating Comet illustrates this (the comet is not rock solid, it’s filled with ectoplasm, which is the substance that allows the ghosts to have a “physical” body). So I tested a bit here and there and arrived at these sets of animated tiles:

Finally, as you can see, we’ve animated our logo in a similar fashion that it’s going to be on the title screen. I’ve also updated it on our indieDB page and it’s a pinned tweet here:

On the next devlog, I’ll talk more about the shrine maidens. Thanks for reading!