We have released patch 1.11 for NCG-19: Gravitus. You can download the patch from NCG19.com. We have also made 100 additional alpha tester sign-ups available. 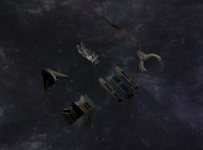 Cubic Timeline Productions has released additional free alpha tester keys on our website to go along with the release of NCG-19: Gravitus patch 1.11. This update adds another row to the technology tree, that unlocks the new destroyer class of ships. This patch introduces improvements to ship construction and the graphics settings options as well as numerous bug fixes. If you are interested in checking out the new patch content sign up for a free account on our website we have made an additional 100 alpha tester keys available. 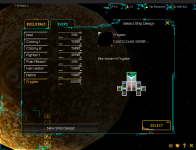 We have received the first pieces of concept art for the more illustrative parts of our game. These three pieces are not finished products but are working concepts for the images to be displayed as possible race ideas on the race creation screen. These are to give the player an idea of the range of different alien organisms they can create and to inspire the player to create something uniquely their own.

We are also working to improve the way players interact with each other in NCG-19: Gravitus. The current system of war and alliance declaration leaves much to be desired and we are looking at implementing a guild style mechanic that allows players to form larger alliances with different alliance member being granted different privileges within the alliance based on assigned rank. This will allow for a clearer alliance system while allowing players more control over their diplomacy. The in game messaging system will also be overhauled shortly to allow for a much simpler interface when communicating with other players.

As we have mentioned in a previous article crystal currency and captains are two features that will be implemented in the near future and much of the ground work or them has already been laid into the system. We hope to be able to implement various features of these two systems over the next few patches leading up to our open beta.