It's been pretty quiet in here for the past year as our team has been busy dealing with Steam and upgrades to other games, but we have been busy behind the scenes!

(And in Black Closet, everything important happens behind the scenes. You wouldn't expect the true villains to step forward and announce themselves openly, would you?)

Along with writing all the mystery pieces and the various relationship storylines (there are over nine hundred player decision points in the game script, although you can't encounter more than a tiny fraction of them in any individual playthrough, of course!) we've also been putting in the rest of the features, such as the basic tutorial your faculty advisor will walk you through at the beginning of the game. 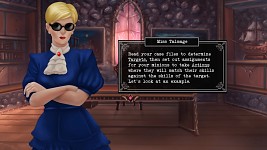 Fear not, it's not very long, just making sure you have the basic idea before you start fumbling around making a giant mess of things. Which you will, sometimes, even when you're used to it all. Mysteries are intentionally confusing, after all. Sometimes you'll be so sure that it was Rowan who was backstabbing you and only realise weeks later that Rowan just had a run of bad luck and it was cute, sweet, innocent little Mallory who was up to no good... (This may or may not have just happened in testing yesterday. I was SURE I had the right girl! That sneak!)

But anyway, after the quick tutorial, most gameplay hints will be sprinkled in gently at the start of each new week. 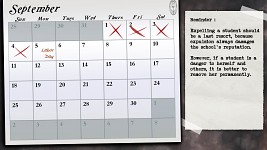 The weekly calendar also helps to keep you oriented as to how much time has passed and whether any major school events are coming up in the near future.

We've also been adding some features to make the difficulty adjustable for people who can't crunch THAC0 percentages in their heads while juggling. The game can now be set to show the chance of success for any action where the target numbers are known. If you're interrogating a suspect you've never met before, the odds are still going to be unknown, but if you're interrogating Lucy down the hall who you talked to yesterday, we can tell you if you've got a good shot, an automatic success, or no hope at all.

And then there's the cheating (Not that elegant young ladies would ever do such a thing!). You can load the dice to make them fall more favorably for you. It's not an instant win button, but it'll help you spend more time thinking about the story and less about the math, if you'd prefer.

The first limited alphas should be available for testers sometime in the near future. The game isn't done, we're still waiting on the event art to be created and there's a lot of bugs to chase, but it's getting to the point where it can be played through. If you're interested in that and other opportunities, please visit our official forums.

And to everyone out there - Happy Halloween! 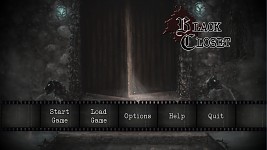