Fundamentals Lasers are distinguished from other light sources by their coherence. Spatial coherence is typically expressed through the output being a narrow beam which is diffraction-limited, often a so-called "pencil beam". Laser beams can be focused to very tiny spots, achieving a very high irradiance, or they can be launched into beams of very low divergence in order to concentrate their power at a large distance. Temporal (or longitudinal) coherence implies a polarized wave at a single fre 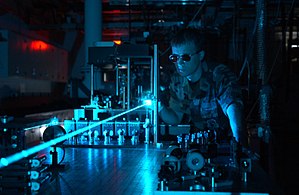 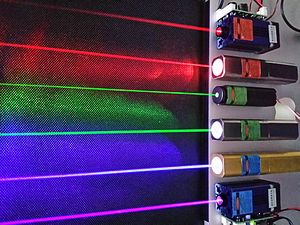 A laser is a device that emits light through a process of optical amplification based on the stimulated emission ofelectromagnetic radiation. The term "laser" originated as an acronym for "light amplification by stimulated emission of radiation".[1][2] A laser differs from other sources of light because it emits light coherently. Spatial coherence allows a laser to be focused to a tight spot, enabling applications like laser cutting and lithography. Spatial coherence also allows a laser beam to stay narrow over long distances (collimation), enabling applications such as laser pointers. Lasers can also have hightemporal coherence which allows them to have a very narrow spectrum, i.e., they only emit a single color of light. Temporal coherence can be used to produce pulses of light—as short as a femtosecond.Lasers have many important applications. They are used in common consumer devices such as optical disk drives, laser printers, and barcode scanners. Lasers are used for both fiber-optic and free-space optical communication. They are used in medicine for laser surgery and various skin treatments, and in industry for cutting and welding materials. They are used in military and law enforcement devices for marking targets and measuring range and speed. Laser lighting displays use laser light as an entertainment medium.