Post news RSS A World of Ice and Fire 2.0 Release

Information regarding the release of A World of Ice and Fire 2.0.

A World of Ice and Fire 2.0 Release

The 2.0 release of A World of Ice and Fire marks another massive milestone within the production of the modification. A large number of bugs have been fixed, including quite a few long standing ones. A huge number of new items have also been added, these all follow the guidelines set out from the HBO TV series Game of Thrones. A massive thanks to Robertidaniel and all of the backers for allowing this possibility and also a big thanks to Kraggrim who has been working diligently to get all of this complete for this release.

If you would like to see the full changelog, it can be found HERE 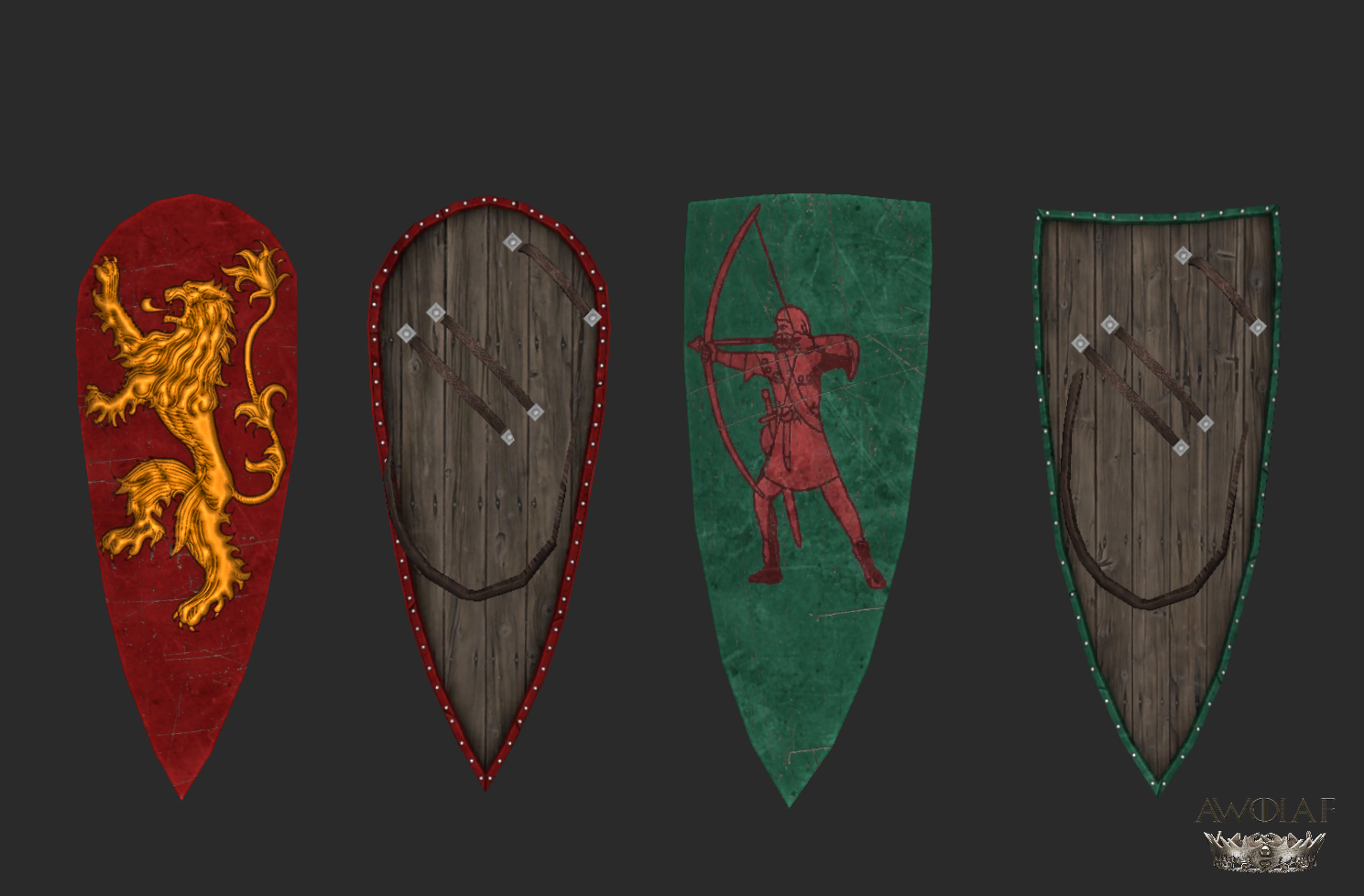 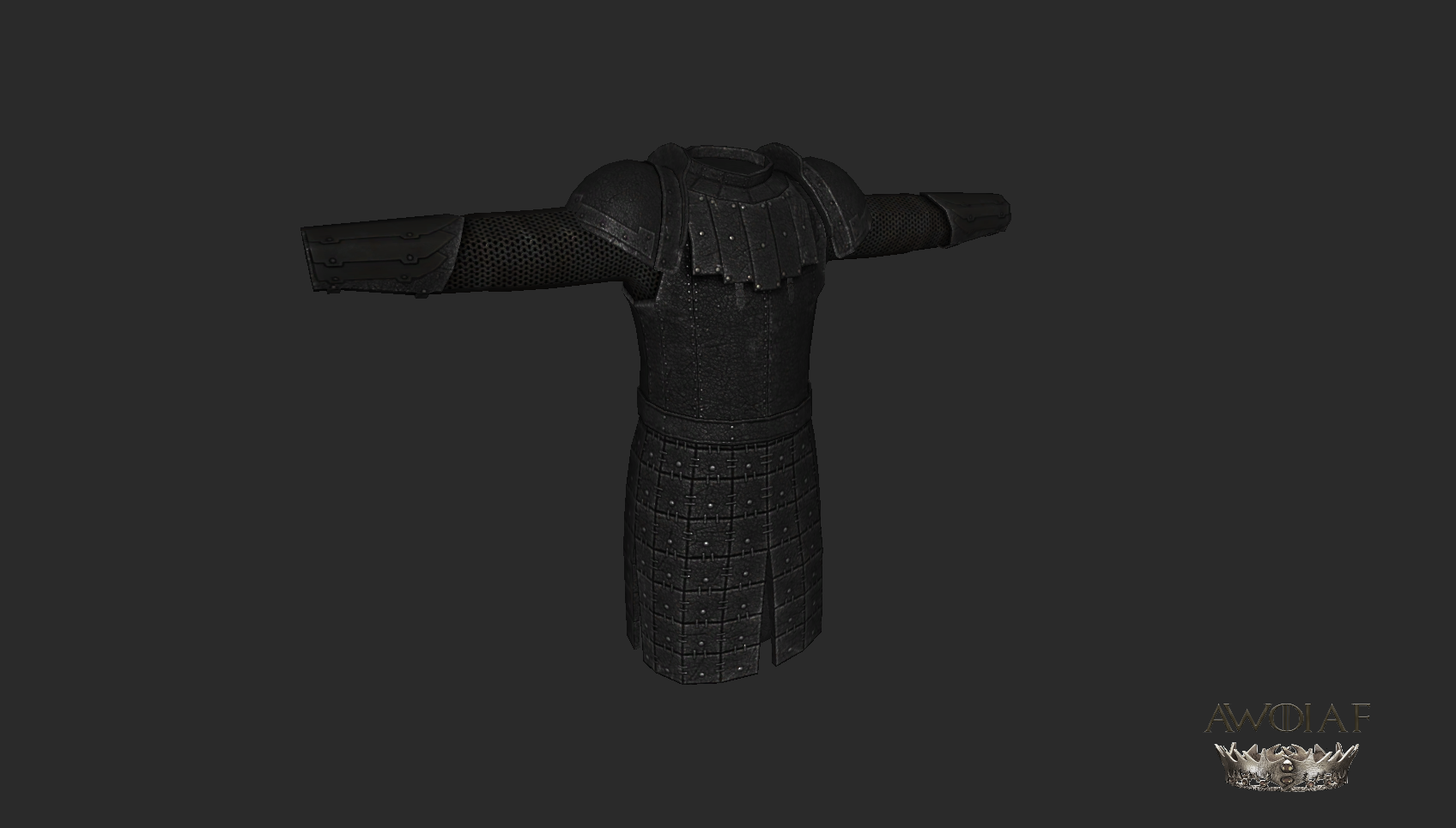 There has been some big changes in this release and one of them I would like to touch upon is the removal of the find item cheat menu. The reasons behind this are simple, it causes bugs, issues and the game to crash. This is a limitation with the sheer size of the mod and the warband engine. Some of you have voiced your concerns of me removing this and I hear you! So I have been trying to add ways to allow the player to acquire all the items in the mod.

One of those ways was always possible. You kill the lord and you acquire his gear. An alternative way, get crowned King of the Seven Kingdoms (or Queen) and send the person in question to serve at The Wall.

A brand new way is to buy gear from the faction blacksmiths in various towns. 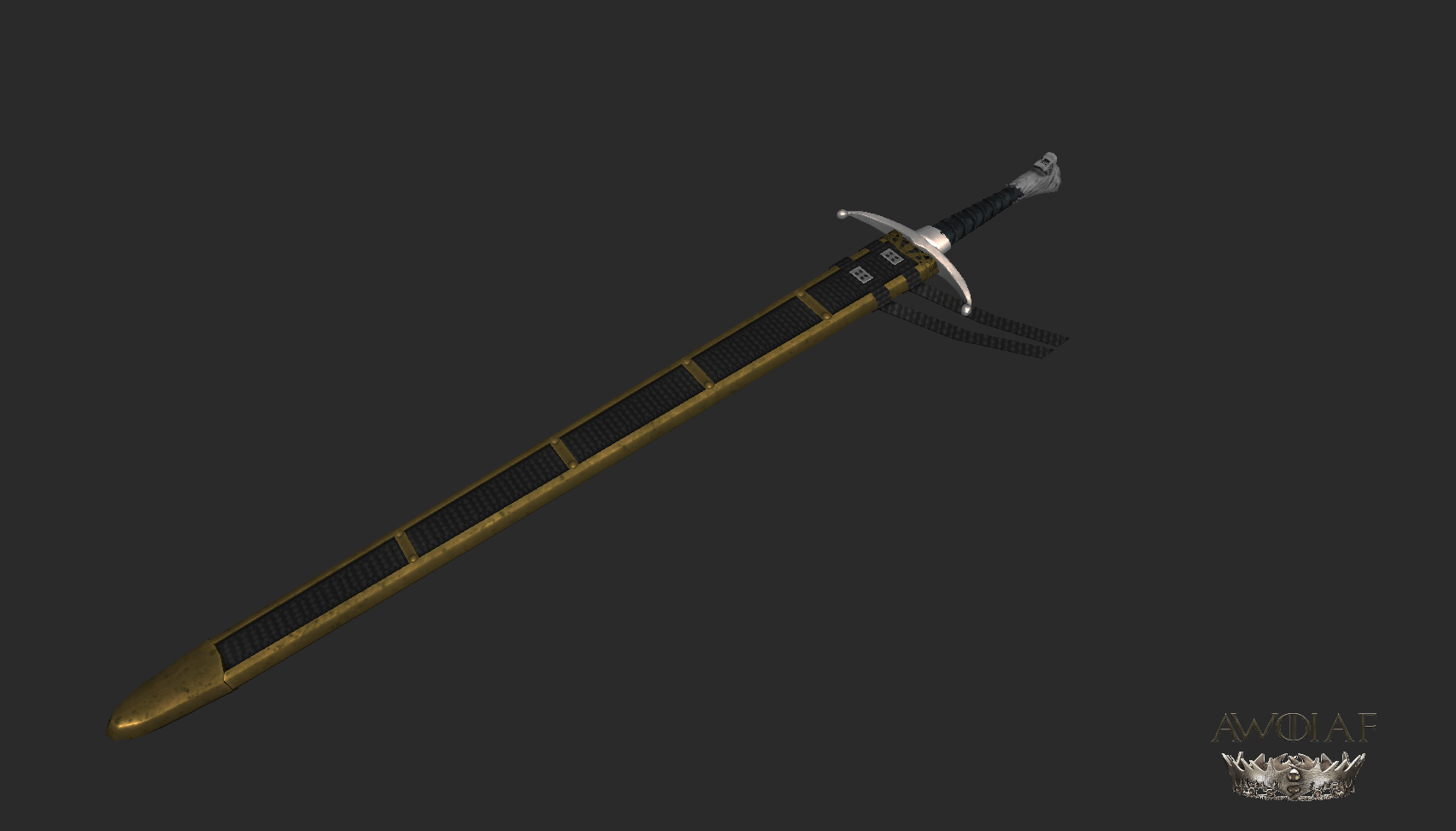 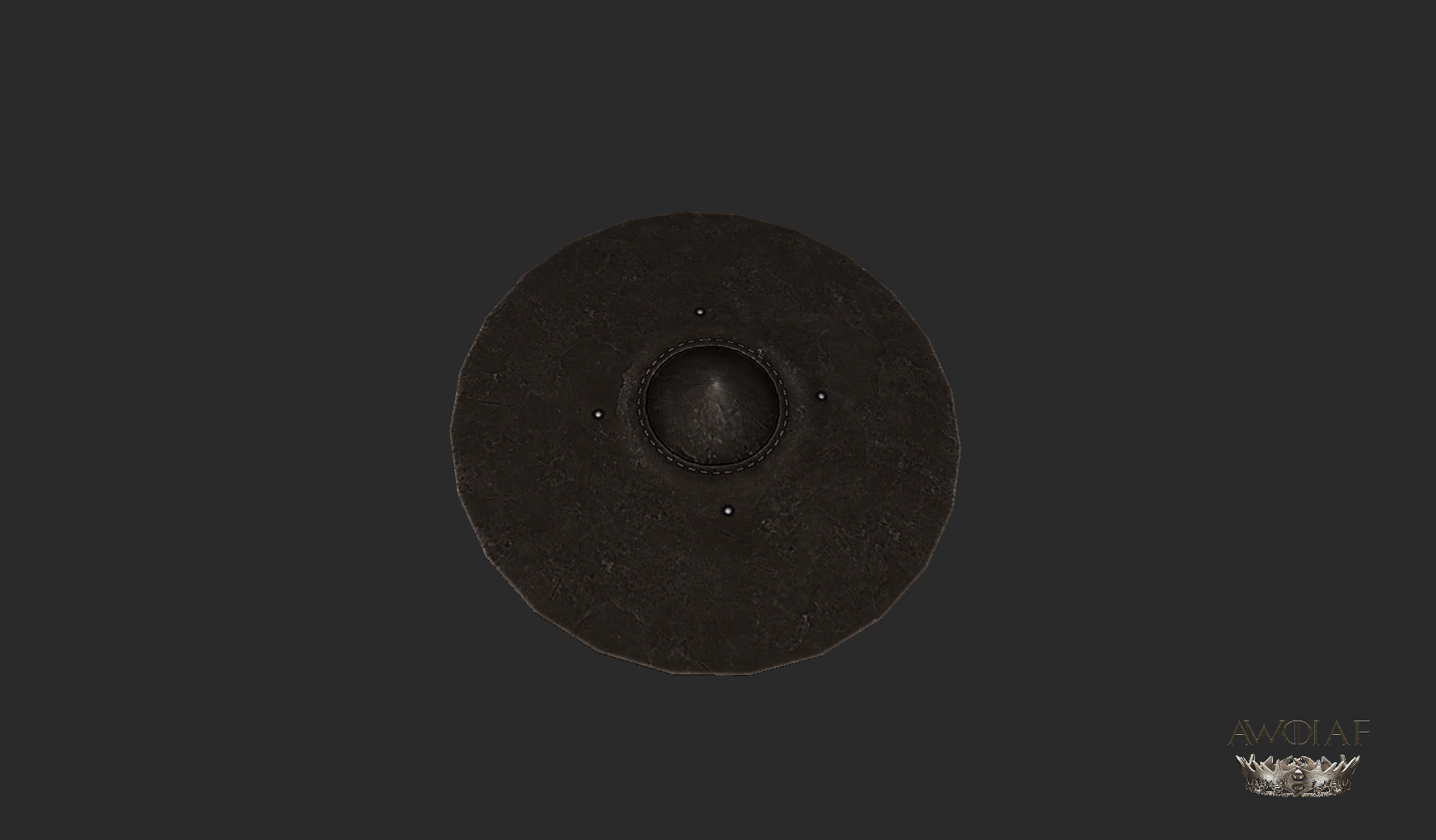 Another exciting feature is the ability to only kill White Walkers and Wights with the correct weapon. This was a feature in previous builds but was bugged and did not work correctly. You will be glad to know this is now fixed and the Others are now harder than ever. Also watch out for them giant Wights ;). 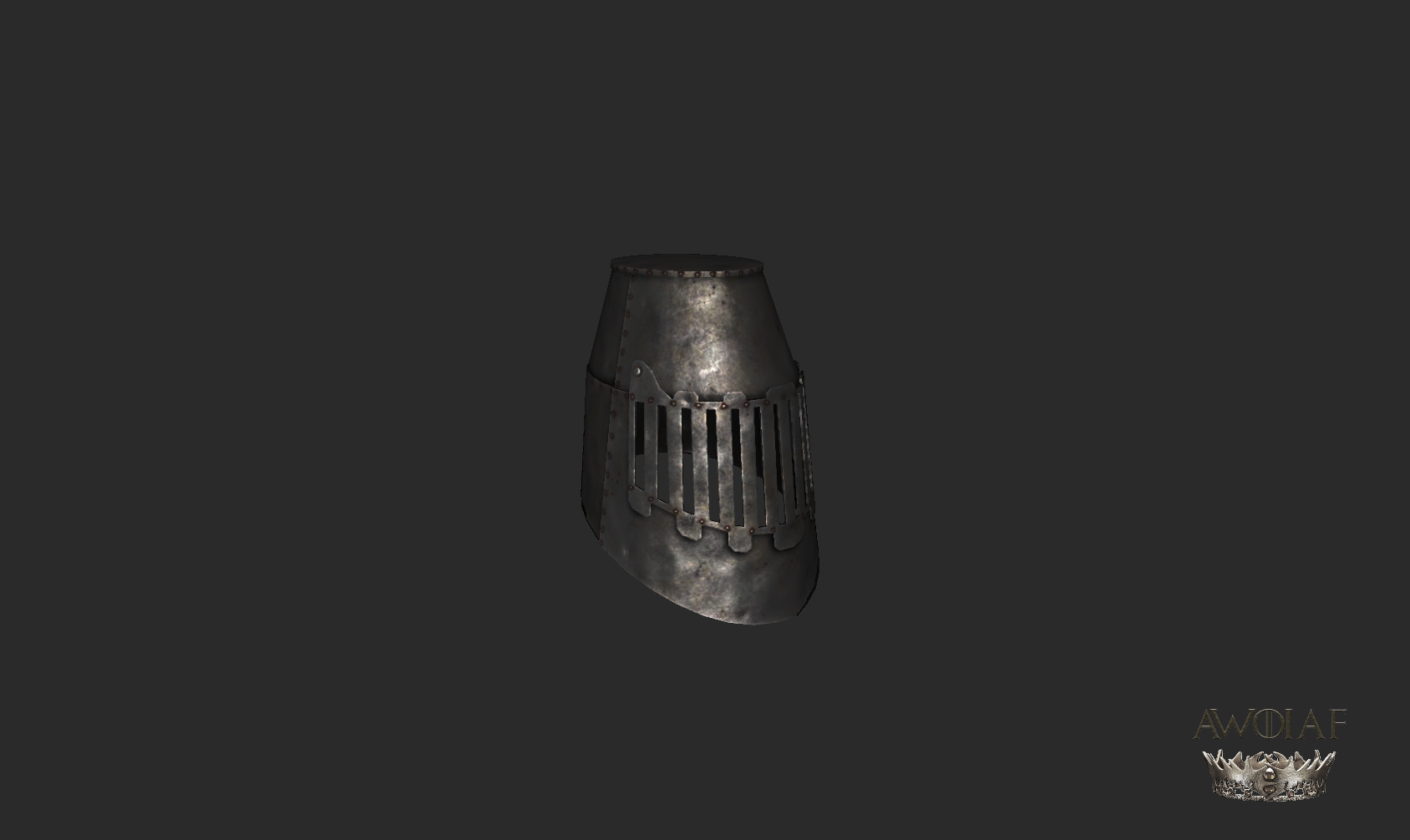 Aside from all the code fixes, NafNaf_95 and Moose has been working hard fixing and adding new scenes. NafNaf_95 has managed to fix a huge amount of siege bugs and path finding issues so hopefully 2.0 should now be a much better experience all round. 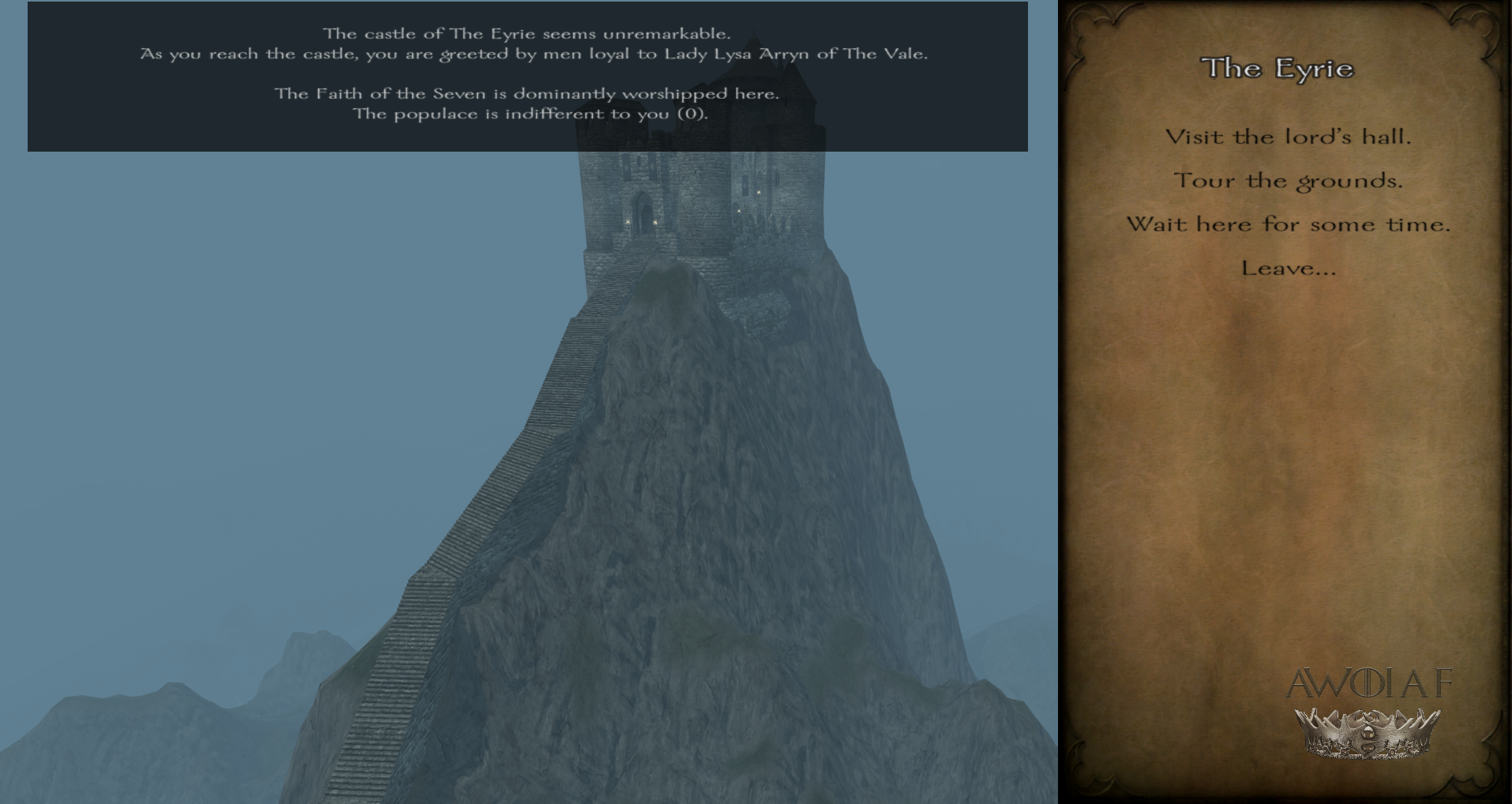 Again a big thanks to all the supports on patreon and all those that have donated through other means. This allows me to continue working on the mod making it better and allowing me to release updates quicker.

If you would like to see this continue then please head over to my patreon page.

If you have any issues, suggestions or questions, then please feel free to head over to my forums.

A World of Ice and Fire Forums

A World of Ice and Fire Dev Team.

In towns when you go to trade with the locals there will be a option to visit the faction smith. If you are of that culture or have higher enough relations you can but faction gear.

you have to set your background as northern in order to have their factions armour.

Wonderful, can't wait to try it! Will Steam Workshop version be updated soon, too?
Been using that for more mods when I can as I prefer the seamless updates to manual downloads.
Thank you so much for all your hard work, produno!

The Steam workshop updates automatically and is up to date.

You can actually jump from the moon door

Best mod so far. Thanks for the update.

Awesome mod but I have a request.Can you add all the house banners to be playable and the bittersteel and blackfire banners.They really help with roleplay

Great job with 2.0! I have 8 hours played and I'm loving some of the new things you've implemented. Thank you again for this tremendously fun mod, Produno and team.

I hate to say this, but could you please remove/nerf the boiling water item that's given to defenders during sieges? Sieges are hard enough already without giving defenders an easy way to kill the cluster of attackers trying to make their way up the ladders.

plzz give unsullied a shoe or boots like before, seeing them running naked foot is ugly though, its elite unit

You can easily do it yourself with Morghs Troop Editor.

yea is this updated verison laging more than the older ones

yea this is more laggy than the older verison

I'm sorry new here,so please tell me how to play this game mod.

Hello, just wanna say that it's a great mod and keep up the good work.
One thing, in the cheatmenu, I can't find anywhere the item list, did you remove it or something? 'Cause it's nowhere to be found.

Yep, it was removed. There's a way to add it back but it might make your game buggy, so I wouldn't recommend it.

Well it was removed due it being buggy so I wouldn’t recommend adding it back again.

Oh..noo :'( How am i supposed to get Dawn now and be Arthur Dayne. :P Thanks anyways, great job.

If you kill Edric Dayne you get it.

You cant kill him..can you?and i think someone said you need to siege starfall.

Wheres the timbers? Where can i find em?

how do you add it back please

Supertramp11 answered that question to BigDaddyROD23's post,if u scroll down you will find it.

sorry for my bad english =\

i love it. its my fave mod. but: i can't play big battle with more than 50 troops without destroying my computer.. its something i have never had in other mods or native.

Whenever i face like 250 enemies at once, this happens:
- somehow i start the battle with only 40 men
- enemies frequently spawn reinforcment waves, while the one that came just 2 minutes before isnt even half killed.
- i dont get reinforcements, even though there are lots of troops available

the fact that i always face exorbitant high numbers of enemies with a small force myself + the fact that my pc can't handle those numbers make bigger battle a game destroyer. i can't continue without cheating them all dead..

so, any advice on getting money? becoz iz rly hardo

I've a little problem, the Targaryen Kingsguard armor is bugged, the arms looks like a bat wings.

And thanks for the answer!!!

No idea where to start looking for dark sister I've dueled and killed nearly every NPC in the game looking for it. At this point I'm losing the will to even bother continuing. Would appreciate it if you'd tell me, Thanks
Manic Depressive.

Also, when I fight my swords breaks(even valyrian steel) and then i have to start another fight to have it back..Like when i fought giants, I did a hit and it disappeared.It wasnt dropped or something, just disappeared,is it a bug?
Also, how can I get the new Targaryen armour?
And one last thing, When are the targaryens invading?I'm in 120th+ day and I have done all the quests but they haven't appeared yet.In some days the WW will appear..

Hello first thank you so much for this amazing mod. Im a big cheater when it comes to mount and blade but for some reason i cant seem to find the "find items" menu in the cheatmenu. Did you disable it? if yes can someone tell me how to enable it again like i said i like cheating in mount and blade. thank you in advance guys :D

You must change the menues.txt archive of your AWOIAF folder, "Mr. Big Cheater"

Hello i found "menu_cheat_find_item 0" can you tell me what to change? i just dont want to mess up the game have no idea what to do thanks :D

Sorry for my english, so the explanation will be a little confusing.

Don't touch the "menu_cheat_find_item 0", the name of the archive is MENUES.TXT

You must put this archive:

In your "A World of Ice and Fire" folder, which is inside the M&B Warband Modules folder. Just drag it in the folder. There choose the "Move and exchange" (I don't know how it's in Windows in English, sorry, is the First option)

REMEMBER MAKE A COPY OF THE OLD MENUES.TXT ARCHIVE, because I recommend you, once you get the object you want, back to the normality and exchange the menues.txt archive again, Produno make it WITHOUT the Find Item option for a reason, so once you have the sword, armor, or whathever you want, just back to normality.

I've tried replacing the Menus file with the one you've linked but it seems to block ALL cheats now. Is there something I'm missing?