Post news RSS A Valley Without Wind: Shadows, Traps, and Particles, Oh My!

It's been a productive week! The difference in the feel of the game between last week and this week is pretty astronomically huge, which is awesome because I spent at least half my time on non-AVWW business stuff this week. That means future weeks will go even faster -- but I digress.

And here's what is new:

Art Progress: Shadows!
Last week we showed off some of the first buildings, and the first basic particle effects, as well as redoing how all the plants were blended into the scene. That seemed to really make people happy compared to two weeks ago, but there were still a lot of comments that folks wanted to see shadows in the game. I'd been reluctant, because I figured there was no way shadows would look right in a game of this sort.

I have never been happier to have been massively wrong. This week we now have shadows in place, and they are utterly transformative. The buildings and plants from last week are all unchanged, but with the addition of shadows they now seem so much more grounded in the scene. And the terrain seems so much more alive at the same time, too. The exterior art style for the game is now feeling very close to final in these versions. Granted, I need to do art for a ton of more terrains, buildings, objects... you name it. But they will all be done in this style. 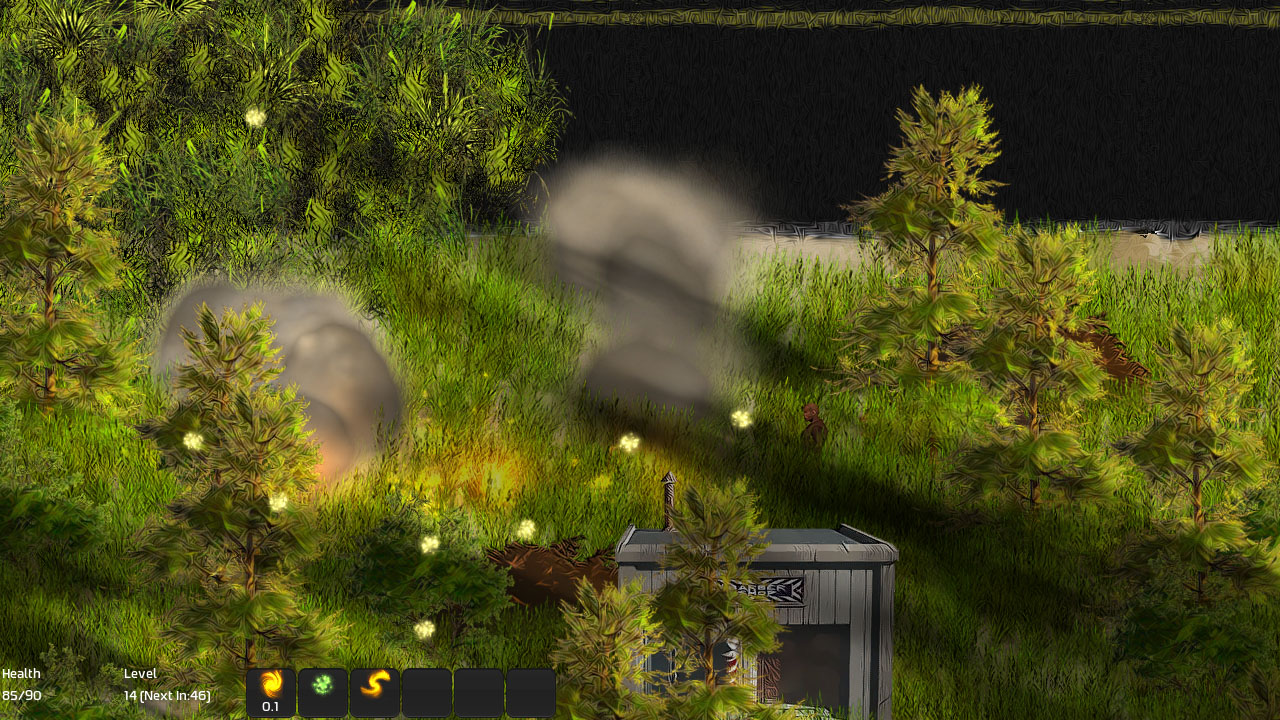 Skelebots
Keith, meanwhile, has been hard at work this entire week on gameplay and the HUD and menus. Characters and enemies now have stats and levels, and gain experience points from killing things. The robots have been renamed to Skelebots, by the way, since they look partly like skeletons. Humorously, some of the skelebots started cannibalizing each other as they chase the player, and thus gain experience and eventually combine into one Super Skelebot that is very hard to kill if you let them chase you long enough.

This is because the enemies are now much better at pathing, and both the players and the enemies will slide around obstacles rather than getting stuck on them. And in terms of the skelebots in particlar, they will knock down weaker obstacles (trees, cars, etc) as they home in on you. The effect of this can be quite terrifying, as when there are thick trees you might not even see the skelebot, but you see this cloud of dust being kicked up as trees are snapped in a line heading straight for you.

Luring enemies into open ground is a definite strategy, although keeping things to close quarters can still work, too. Last week we had barely gotten this first enemy in place, and so it was getting stuck on obstacles all over the place and generally being ineffective. They looked scary, but were ridiculously easy to evade. This week... they're unsettling, to say the least. 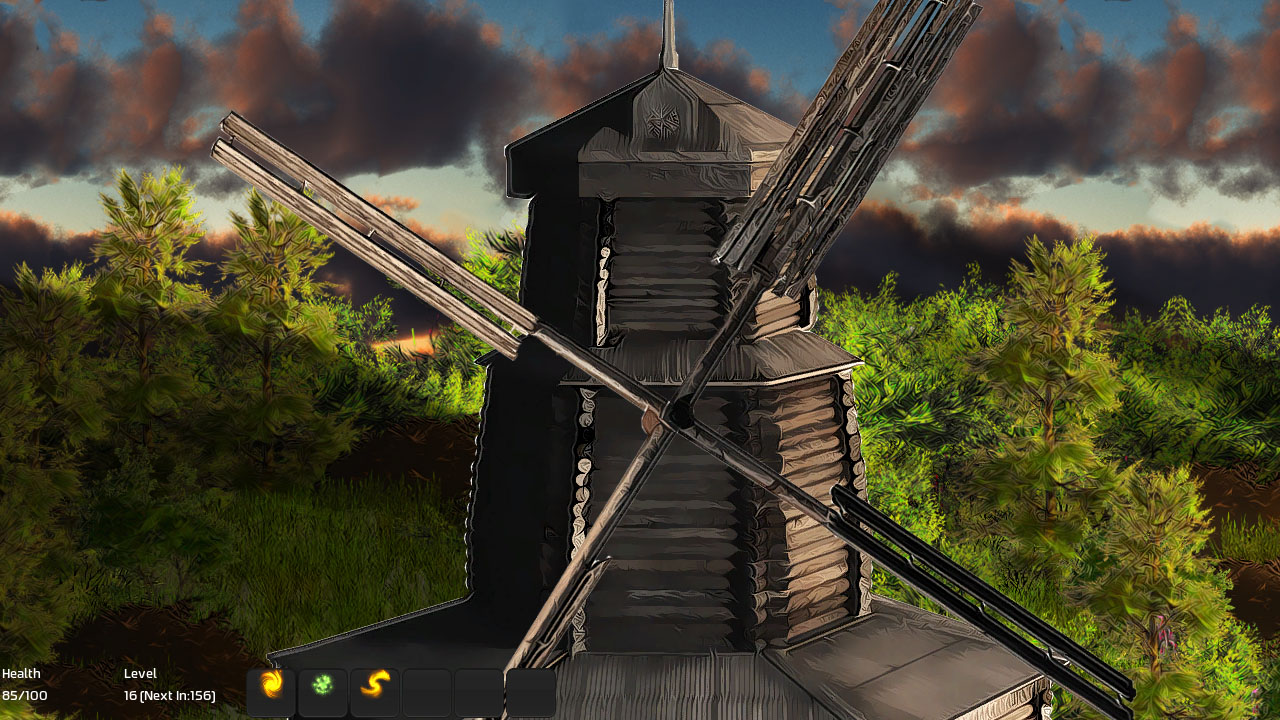 HUD
The on-screen HUD for the game is intended to be very minimal, as with many action-adventure games, to let you see the most of the action as possible. There are six skill slots along the bottom of the screen, and you can switch between three different sets of these slots with the press of another button. The text to the left of these slots, showing the level and experience points, is very temporary and still in the AI War font. But that's about the extent of the HUD.

Spell Targeting
One thing that the PC folks complained about last week from the video was that combat was basically only on the four main compass directions. This is pretty familiar to console gamers, and so I hadn't thought much about it (being a pretty even mix of lifelong console and PC gamer).

Keith was experimenting around last Sunday, though, and put in a targeting system where you can press tab to cycle through enemies -- and that turned out to be just what the doctor ordered. That let us increase the speed of the skelebots, for one thing, so that they run only a hair slower than you. Before that would have been instantly fatal, but now you can lob fireballs or other spells over your shoulder as you run. That really changes things up.

There are actually two different fireball spells now, you might notice from the screenshots or video. One is just a dumbfire mode that either aims along a compass direction or straight at an enemy you've targeted. It doesn't change course once it's been fired. The second is a homing fireball, which curves to seek the specific target you've selected, following them as they move. The homing fireball really only works in open spaces, but it can be shot in a dumbfire mode along the compass directions as a backup, too.

Inventory and Scrap
The first bits of the inventory have now been implemented, although we still have some visual and code work to do with it. This is pretty exciting, because a ton of parts of the game revolve around picking up items and loot and later crafting or trading with them. Also, all of the spells and other actions you can take aside from moving around are based on items that you equip into slots.

Last week we just had a couple of spells hardcoded into place for early prototyping, but this week they are fully spell gems that are equipped and which can be shifted around. In this week's video, you can also see that the enemies and other destroyed objects are dropping little glowing balls. Those are the earliest versions of scrap being dropped, such as various types of wood, metal, etc. These are useful as minor components in crafting -- more on that later. Suffice it to say, this is coming along quite well. 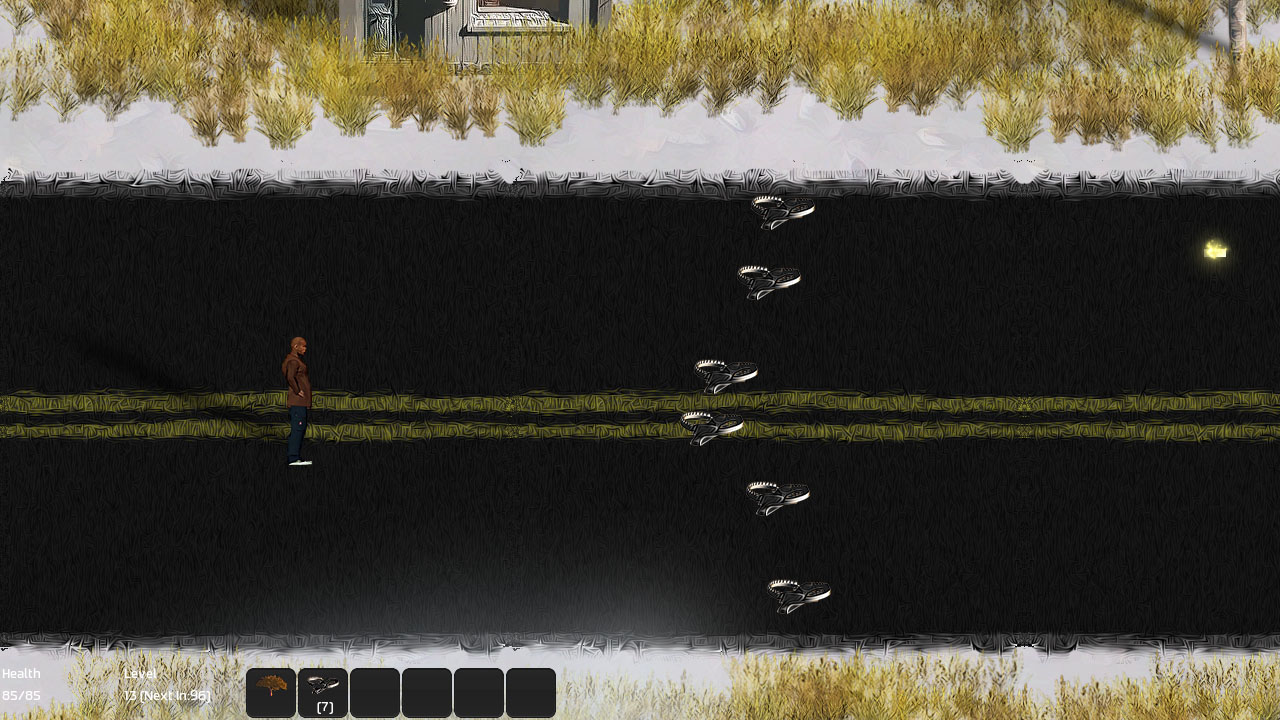 Traps
Bear traps have been added to the game as the first trap. These are used just like spells, but are deployed directly in front of you. This makes it almost impossible to deploy traps while enemies are actively chasing you, since you can't run backwards.

The effective trapper sets up his/her traps in advance, and then lures the enemy across them. Traps are one of the five main classes of craftable items (along with weapons, armor, magic gems, and consumables), so there will be lots more to come from them.

Particle Effects
Last week we had a very basic particle system, and some particle effects that looked okay. However, this week we now have the final versions of the fireball and heal spell effects in place, along with the teleport and summon tree effects. Plus lots more types of death explosions, which look pretty cool. When you die, there's a big red poof.

This was my big project for about half my AVWW time this week, and I'm really glad to have it in place now. Not only did this involve a lot more particle animations in Particle Illusion, it involved a lot more programming of possible particle behaviors in the game itself. Fades, movements, delays, scaling, shader selection, and other things. 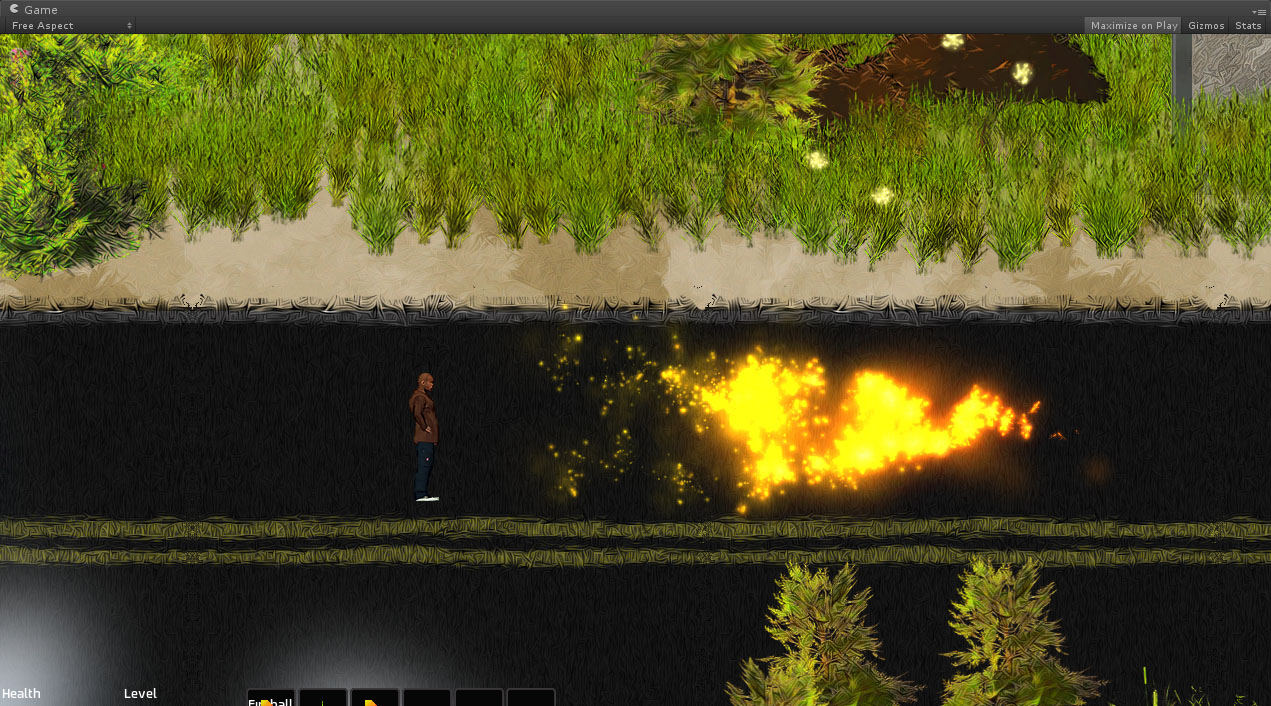 There's still more that we can do in the future, but the particle scripting system in the game is pretty darn robust at this point, and lets us get some pretty complex effects. What you see actually implemented so far is just the tip of the iceberg, but will give you a pretty good idea of what's coming.

New Objects And New Junkyard Scene
There are a variety of new objects in the game this week, although not as many as last week since we were mostly focused elsewhere. A couple of new kinds of grass and reeds for the junkyard type scenes, new shipping containers also used there, and tire piles as well. All of these objects (not the plats) are destructible by players and enemies. 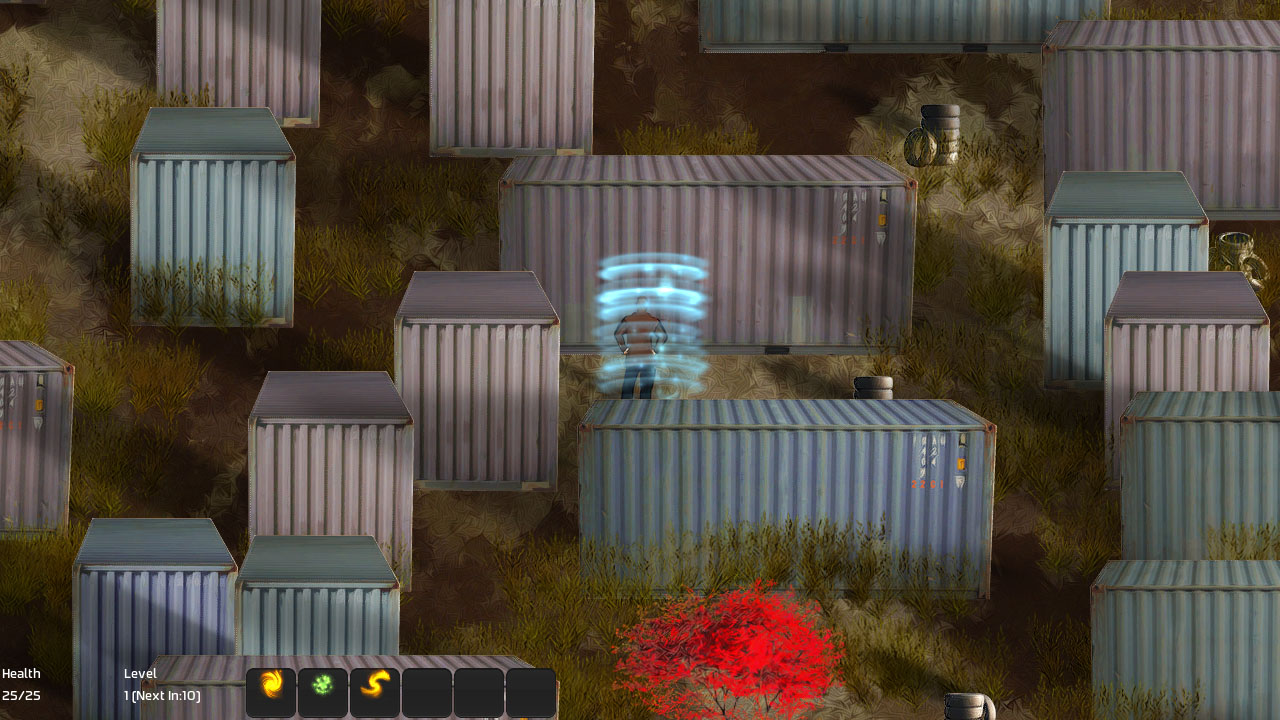 The randomized junkyard scene is mostly for testing and example at this stage, but it adds some more variety to our green cliffs and snowy woods scenes that you've seen before. These are using the "chunk scripts" that will later be the underpinning of the procedural generation methods for the game, but right now they're only so random.

Story Evolution
Over there on the official AVWW page (where you can see all the new screenshots, too, by the way), the "What Is A Valley Without Wind?" section has been updated to include one new paragraph at the end. The story about this being a post-ice-age survival game is still true... to a point.

The receding ice age has been the whole of the characters' existence up until the start of the game, but as the game gets underway the scope of that story actually expands to contain something much larger. No spoilers! But for those who are wondering: no, it isn't time travel. I do love a good time travel story, but this is something more original, at least in the world of game stories.

Coming Soon
A big goal of ours coming up is to get the world map going, and actually cross-chunk movement and the more official regional seeding scripts. That's when we'll start seeing more unique and interesting regions, and where all those tons of new art pieces are going to be coming in handy. That, plus building interiors, caves, etc.

I can't believe we've only been working on implementing this project for four weeks -- with all the months of design talk, it feels like longer, but we're also just so much further along than I would have expected for this sort time period. That's... unusual for us. We're still looking good for the first public alpha hopefully in late March, but of course we'll keep you up to date over the coming weeks as development continues.

As each subsystem comes online (art, HUD, particles, actors, world map, etc), that's taking us ever closer to the point where we can really let loose and focus hugely on content and gameplay almost exclusively. That's exciting, because even for the first alpha I want to have a huge amount of variety. So far that's looking quite feasible! - Chris Park

Note: All 12 new screenshots can be seen in the images section.