A Tribute To Donkey Kong Country is a free, unofficial and fan-made game for PC. The First world of the game will be released on December 1st 2014! It will include 8 brand new levels! Game made by one person.

I've been working on this project for the last several years, and I wanted to share it with you, it's called : A Tribute To Donkey Kong Country!

A Tribute To Donkey Kong Country is a free, unofficial and fan-made game for PC.

The aim was to try to do a Donkey Kong game in high definition, trying to keep as much as possible the look and feel of the original Donkey Kong Country game for Super Nintendo. At the time of its release, just 20 years ago, the game was really beautiful and had incredible graphics. Rareware, the original developer, used renders (pictures) of their 3D models of their characters and backgrounds as 2D elements so that the Super Nintendo could display them.

I thought that now, with the power we have on modern computers, I could create a game with 3D models as detailed as what they used in the original game, but displaying them this time in real time 3D.

So I went on modeling in 3D the most famous characters of the DKC series, animating them, and creating brand new levels in the Unreal Development Kit. 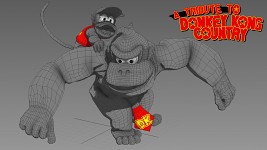 You can see more renders here.

I finally created a full remix of the original game, and I will release on December 1st the first world of the game, that will include 8 new levels! 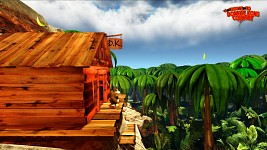 This game is a tribute to the Rareware and Nintendo folks who created an incredible game 20 years ago. I created pretty much everything that is in the game, except the music made by brilliant artists from Ocremix.org !

I'm not a game developper! I worked on this after my day job, and during the weekends.
I hope you'll check the website again on December 1st for the release, and like the game!

I am not a huge fan of DK games, but this looks like great example of a talented artist putting a ton of effort and time into something people love. Amazing job.

It looks Really nice mate, however the contrast is too big at some areas. Games like DK was bright and "funky" looking, no black areas and backgrounds, no blinding sun effects.

Off topic but any chance of doing an Animal Crossing game for the PC since you are working on Nintendo games.

Ahah! No, not planned at all sorry :)

That takes me back, so far! Looking forward to the release.