The game has just been submitted and granted on IndieDB, but while it has as reached a quite advanced stage of development, there are a still a lot of work that remains !

The Alien Wasteland has just been submitted and granted on IndieDB, but there are only screenshots and a small summary to describe the game. So before I have more materials to upload on the profile, I would like to sum up what is going on and the main steps of development of the game !

Because I am the only one developing and maintaining the game, I designed it to be short but sweet ! The game is currently in a early beta stage, because while few weapons and features are missing, the map is almost completed and can be played to the end.

So basically, while travelling a canyon desert infested of aliens, you found yourself unarmed with a car running out of fuel just near a petrol station. The goal, explore the petrol station and found all petrol cans for your car ! But the aliens have spotted you and will come in waves !

After finding the first weapon, the baseball bat, you will have to deal with the first aliens who will come in a small wave to get you, and they can come from any side of the petrol station ! After defeating the wave, a can and a more powerful weapon will spawn somewhere in the map. You will have a short break to find them, equip the weapon and pour the can on your car stuck on the road ! If you fail to, you will have to continue searching for while dealing with the next wave of aliens. There are 9 waves on the map, so to complete the game you will have to collect 9 cans !

The game is heavily based on random events, that means the alien waves will spawn on unpredictable sides, at unpredictable time and will contains an unpredictable number of aliens. However, the more you advance on the game the more it will become hard ! The most dangerous aliens will be more present during the later waves. And before introducing a new alien race into the wave, you will have to defeat an alien boss !

This is still a brief summary of the game mechanics, and some things may change through the development ! Feel free to give your feedback !

About the development of the game, right now the current challenges for me are : 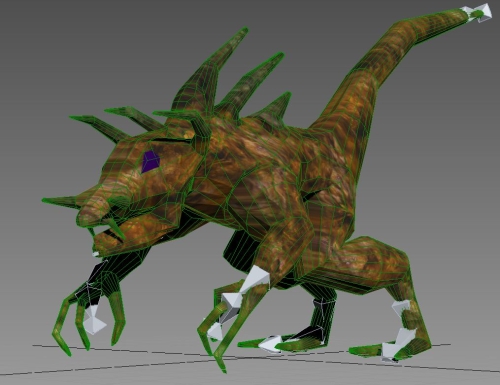 So this will be all for this new, I will be very interesting about your comments ! Stay tuned and don't forget to subscribe if you want to track the game and get noticed for the next updates !

This is shaping up to be a fricken sweet game, Your doing really good work :)

Thank you ! I am working hard to offer a content of quality :D

Thanks!
I needed about more than one year to master UDK and its Unreal Script. It has also took me a lot of time to reach a correct level in modelling and sculpting. Developer's forums and Youtube are a great way of learning ! Also, during the development of the game, I had to cut a lot of things which I planned at the beginning...

I shall open a development blog where I will explain more about this.

is this game going to be free?

No, this is an indie commercial game. I still have not fixed its price but I will make it as much accessible as possible for everyone. It will be available on Desura, on my website and I hope on Steam too.