Reliquary trudges ever on towards being a complete game. This time I'll be discussing the second major area of the game and it's boss.

The asteroid field we call The Reliquary is a pretty weird place. It's reputation among spacefaring folk is similar to that of the Bermuda Triangle on Earth. Most vessels that get too near it suffer catastrophic instrument failures and are often lost within. The few expeditions that have returned report massive energy signatures detected deep inside the field, and strange life-forms persisting in a thin, gaseous atmosphere trapped in place by some unknown force.

That's enough to explain away all the problems with an asteroid field teeming with monsters and plantlife, right? Probably not, so let's ignore that and talk shop. 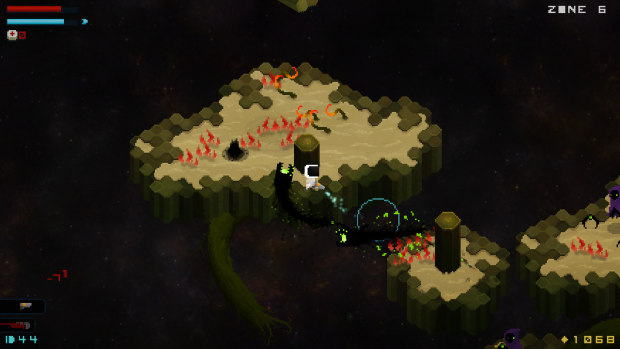 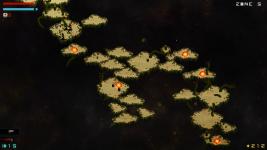 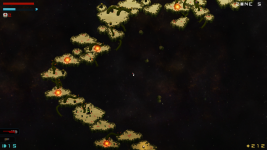 This volcanic jungle area will introduce the first environmental hazard with lava pits. Player interaction with them is straight forward, dealing damage over time if you stand in them. What I hope makes them interesting is how monsters interact with them. Swarmlings that wander into lava don't take any damage, but swell as they are superheated. Shooting or touching them in this state will cause them to explode, which can chain to other superheated Swarmlings and potentially destroy an entire swarm and it's hive.
There's a fair amount of overlap between areas in terms of the variety of monster the player will face, so hopefully area-specific interactions like this will keep it from getting stale.

The two monsters unique to this area are combined to form the Swarm Cultist. This monster will follow from a distance and retreat if you get too close, releasing a cloud of bat-like creatures I've been calling Inkwings to cover their escape.

Inkwings will circle their Cultist host, sacrificing themselves to deflect ranged attacks. If you get too close, however, they will flock in your direction and burst in your face. Individually this doesn't do much damage, but a single swarm can kill you if you fail to repel them.
Killing the Swarm Cultist will result in it dissolving into one last extra large swarm.

And then there's this thing. I don't even know what to call it yet. It's this area's boss, so it needs a way cooler name than HappyCrab, which is what I refer to it as in-engine. 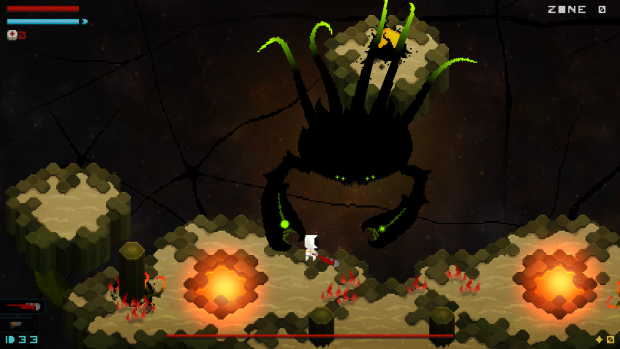 This thing flies around shooting at you if you aren't close enough to pinch. All you have to do to hurt it is shoot it in the face, but those big claws get in the way. They each have their own health pool and can be destroyed, but that's a big ammo investment. Blowing one claw off will make the other attack twice as often to compensate, and adds a chance for Happycrab to use it's most dangerous attack, a spray of caustic sludge that will explosively ignite if it hits a lava pit. Blowing off both claws will expose Happycrab completely, but then it'll just do the sludge thing all the time until you kill it. That might be worthwhile if you're confident you can deal a lot of damage in a short amount of time, but I'm hoping it'll be a tough call.
It'll take a lot of playtesting to get this fight balanced correctly, especially for the melee strategy. That's what I'm in the middle of right now. Making boss fights is seriously the most fun ever. (The least fun thing is doing all the UI stuff.)