Hello all! It has been a while since we have updated you, and for that we can only apologise. Real world responsibilities have been mounting. Here's a little update to thank you for your patience! Read on for factions both great and small, and a few other tidbits.

It has been a while since we have updated you. We can only apologise for our silence, real world responsibilities have been mounting, and we are a small team, so things have been slow. But we are still moving forward! This is a little update to tell you all about the progress we have made. Read on to learn about our factions, both great and small, our 2D and quest writing progress, and to see a fantastic piece of concept art by our incredible artist Ubal!

FACTIONS
We have twelve major factions planned, each with a corresponding minor faction (and sometimes several), to inhabit the world, with their own design that will feel both familiar and unique!

The Major (and Minor) Factions:

CONCEPT ART AND WRITING
Our teams are hard at work in developing the overall look and feel of the world.

The Silmarillion is known for its world-shattering events, and while our quests will involve you confronting massive armies and great beasts, our writers are working on developing smaller quests so that you can see what it was like for the little people as a god unleashed his hordes upon the world, and larger than life warriors stood against them.

Our concept artists are creating the visual look of each of the factions, a not insignificant task as we have decided to depart from the visual style of the Jackson films in favour of our own style based upon historical cultures, and we are very happy with the results! 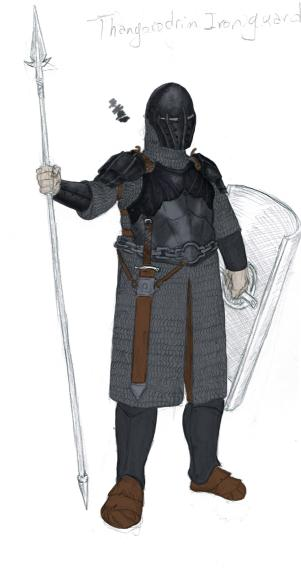 OUR FUTURE PLANS
We are still very much focused upon developing the visual style of the world. Our departure from the more typical art style associated with Tolkien's work, that of the Jackson films, has given us a great deal to do, but we are certain that our decision is the right one.

Our plan is to develop the world a region at a time, beginning with the north east. This means that we will focus on certain factions first and foremost, and gradually work to complete the whole roster. At this point in time we are focusing on Morgoth, the Sons of Fëanor, Belegost, and the House of Ulfang, providing a good selection of each of the races within the mod.

WE ARE RECRUITING
We are always on the lookout for new team members, no matter what their skill set. Let us know if you would like to help out over at our Discord!

This will be a great mod if you can finish it. Good luck!

Thanks! We are under no illusion that completing this mod will be easy, but we are committed, and confident that we will create a great gameplay experience for fans of Mount and Blade and of Middle Earth.

All we can say as fans is: " May the blessing of Elves and Men and all Free Folk go with you.
May the stars shine upon your faces!”

You have my thanks, sincerely.

Noice. I like that you're making your own concept art, some of PJs art choices were so far removed from the descriptions given in the books. The concept art and models you've shown so far look beautiful.

Thanks! We are very proud of our decision to make something new, and our concept artists are all incredibly talented.