New mod will add the librarian to the original campaign, extended skill trees for all squads and lots of new wargear.

A new mod has been released for Dawn of War 2 (vanilla) and Chaos Rising, this mod will greatly improve the gameplay of the original campaign while staying true to the original concept of small-scale storyline RTS with action RPG elements.

EDIT: 2nd version of the mod featuring captain Thule was deleted, since it had a bug the uploader currently cannot explain and fix (librarian not appearing in CR), the librarian version of the mod was testplayed by creator all the way through and is not affected by this issue.

Core features of the mod

Let me first note that enemies in the game will be compensated for any items below that result in generic buffs for the player squads, so that the game remains challenging, but not on primarch level since that level was already rated insanely difficult by many players and will consequently be a little more doable in this mod.

-The librarian is available in the vanilla campaign with improved skilltree instead of captain thule, librarian will carryover to CR with his equipped wargear from last mission)
-Skills for 'ranged force commander' and 'melee avitus' are improved for more fun and better balance.
-The complete 'pure' skilltree from Chaos rising is unlocked in the vanilla campaign
-you now get +3 attributes for the first 10 levels, from level 10-30 you still get +2 per level
-you can reassign your attributes one extra time between the end of act 1 (tyranid boss) and first act 2 mission (meridian fire prism)
-all squads start completely clean without any attribute investment already forced on you
-all squads can end up with 3 accessory slots
-you can carry up to 8 items like grenades, otherwise you would collect them in the fog anyway so this is more Qol
-Tarkus can unlock kraken, vengeance and dragonfire ammo for everybody to use early in the game.
-energy stimulants, orbs of omnissiah, smoke grenades and master-crafted grenades are all set as mission rewards in the vanilla campaign (on 'forced' missions that didn't have 'must have' reward already)

Implementation of Librarian in Vanilla:

The librarian Jonah will appear after the second mission and can deploy the earliest in mission 3.
All his wargear is reorganized and around 30 new items are added to create level 1-18 wargear drops for him. He can also equip all existing powerswords and new melta pistols in addition to his force swords and force staffs. His gear will carryover to the next campaign like the other squads. Jonahs skill tree is revised, he no longer uses 'relics' to enhance his abilities, instead he gets the enhancements straight from his traits, some of his branches are a bit longer and some slight nerfs were done to balance this. The bottom line is he can now carry 3 fully upgraded spells into battle and have lots of new gear. Unfortunately this means Thule is no longer available until you reach Chaos Rising, since I have not been able to change the vanilla squad selection screen to the CR version. After the mission in which he first appears to help fight a boss, he will be on the armageddon and talk (like martellus), but he can't go on missions. 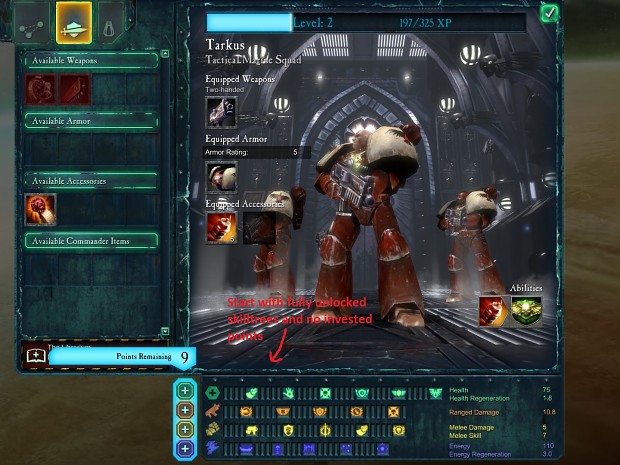 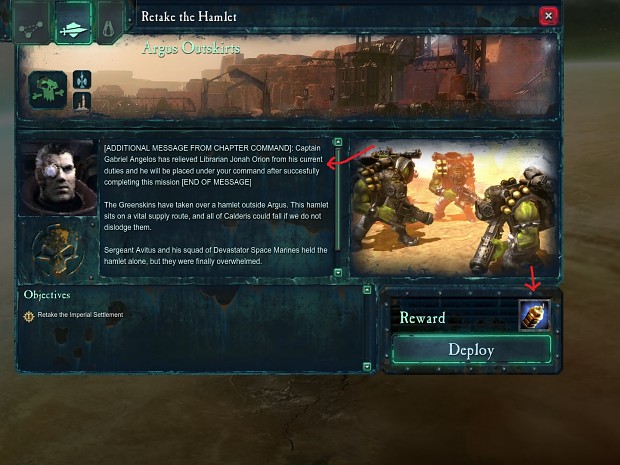 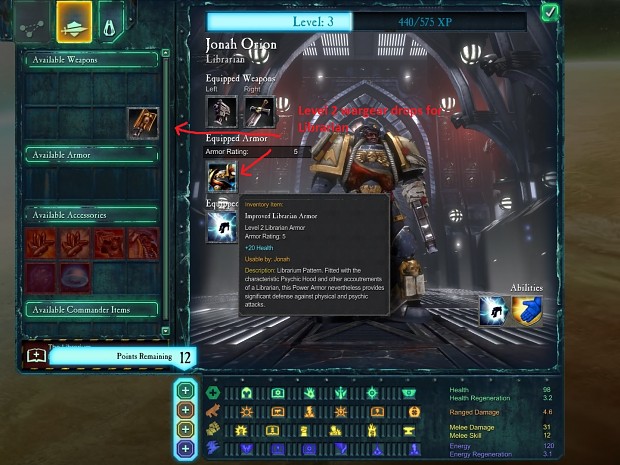 -has gotten a major overhaul to be more balanced and more fun to play (better against bosses, but less imba vs mobs with deadly aim)
-If the force commander is ranged, battle cry will work more like a very short but very powerful 'focus fire'-like ability with massive increase in fire rate.
-deadly aim is nerfed otherwise it would be totally broken with battle cry.
-he can now equip teleport packs with heavy ranged weapons, so the commander slot doesn't go to waste.
-starting at level 8+ new helmet wargear can be found that mostly give boosts suited for ranged force commanders (but also some for melee characters).
-he can fire 'light' weapons like bolters, flamers and plasma faster.

Also melee Avitus is more interesting, if the melee tree of Avitus is developed far, he changes into a 'heavy intercessor' squad which is more of a high damage tactical marine squad. 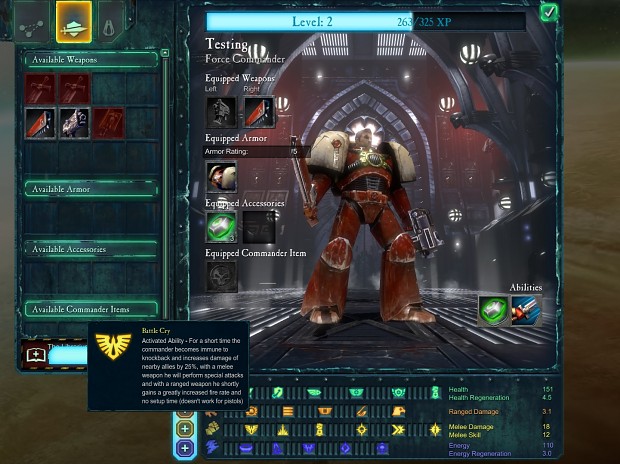 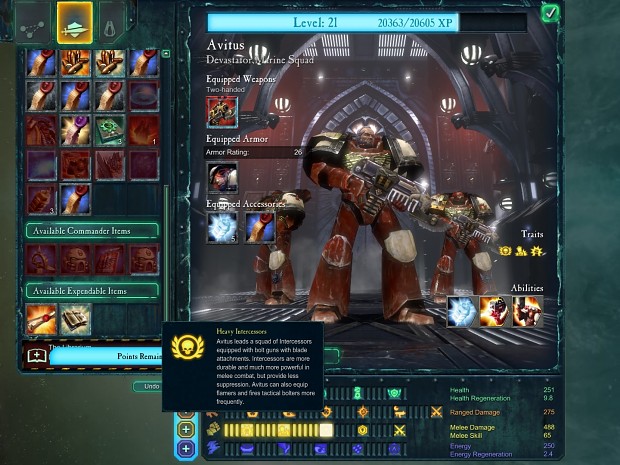 -Added many new wargear items, among them lots of early librarian gear, helmets and melta pistols.
-level 16-20 items from chaos rising campaign will 'bleed' into the vanilla campaign,
you may find melta guns, melta pistols, multi-meltas, lascannons, lightning claws, terminator claws and grenade launchers in lategame vanilla.
-grenade launchers and helmets can also be found a bit earlier
-increased wargear drop rates for regular mobs from 3% to 4%
-increased wargear drop rates for mini bosses from 4% to 15%
-increased wargear drop rates for swarms from 1% to 1.3%
-added possibility for many rare items not only to drop from bosses, but also have a rare chance to drop from mobs.
-fixed terminator powerfists almost impossible to drop in CR
-fixed a lot of powerswords in CR being overpowered (stronger than 2h hammers)
-fixed some 2h hammers and many force swords being underpowered
-nerfed various CR items that had OP stats, but also buffed a lot of the useless ones that had were made with 'lets give it 10 energy regen and be done with it' philosophy
-fixed various guns being way overpowered unintentionally, like a sniper and rocket launcher with massive fire rate.
-clarified descriptions of many items

Made all common gear (=items without buffs) more useful:

-reduced level of all common wargear items (items without buffs) to -2 and removed level requirement
-all common armors have a basic leveled health buff
-many rare armors that were previously useless also got some minor health buffs to make them useful.

-a few absurdly hard bosses (avatar of Khaine 1st encounter, warbosss, idranel 2nd encounter) have a little less base HP.
-in last mission of CR the 2 tanks do more damage, because while never difficult, the start of this mission is otherwise just a pointlessly long drag, that makes you wish you could just use your squads.

-you can have only one orbital bombardment, but 3 drop pods
-remote detonators cannot be made energy based and cyrus starts with one less.

This is done to prevent cheating out of a mission and exploiting detonators, thanks to some of the buffs to squads mentioned above exploitation will not be necessary to finish missions on higher difficulty.

I think if there's one thing DoW II players want, it's a game that still has the necessary tactical depth but has a slightly larger scale.
The Wrath of the Blood Ravens mod tried to do this, but overshot the mark and destroyed the balancing of the underlying game.
Still, I'd like a mod where the Space Marines don't run around the battlefield in tiny little groups and (have to) hide behind every wall.

Is it actually possible to mod the Retribution campaign? Or is it unmoddable?

can it be made to work with max lvl increase mod? Much of the abilities remain unused if it stays this way, capping lvl at 50 would be great.
Note: I tried to run this with maxlvl increase mod by modifiying the module but the changes to the skill tree you made have been lost. I don't know how to solve this.