A minor setback, should be getting back on track soon enough. Stay frosty.

As many of you know, we had scheduled to have our public beta released on Valentines Day, February 14th, however a family emergency had made this a virtual impossibility. I apologize for not having announced this sooner, but I believed there was still a slim chance that we may have something playable out by that time. We've been working hard up until my departure to have this beta out on time. I had only just returned on the 13th and my computer had a physical read error on my main hard drive. I am unable to access it or any of my other drives at this moment.

But all is not lost,

I managed to preform a rudimentary repair on the disk, and sent it to my dad so that he can attempt to extract the information on it, and copy it to another disk, which should hopefully amend the aforementioned problems. Most of my information is backed up and saved on different drives, however without a system disk, progress is stalled. Even if the drive cannot be salvaged, most of the mod's materials are saved on other disks which are intact.

I'm reluctant to put a date on everything returning back to normal, but my dad says he can have everything on my system drive copied to another hard drive and have it sent to me by this up coming Saturday, of course as I had mentioned earlier, our family crisis makes this a secondary priority.

Just to give you an idea of how far things have come along, I have the prowler 95% modeled, the CCS is about 90% modeled as well and it's about 60% textured, and I have a weapon module 95% modeled for the frigate and corvette. I've also finalized a UNSC corvette concept and a heavy cruiser concept. Since the previous update, we have made major strides graphically, I do have an atmospheric effect working in game for the planetary invasion gametype. Additionally the effects have been upgraded, bullet sprites are now 3 dimensional objects with smoke trails and glow effects courtesy of the HW@ team.

Again, super sorry about not having the beta, I'll try to keep you posted on my progress. (updating off of Library computers.)

And, just so we don't come to you empty handed, we have conscripted the professional aid of the esteemed Halo modeler Liam Keating, for a city model which will be used in the planetary invasion gametype I mentioned earlier. 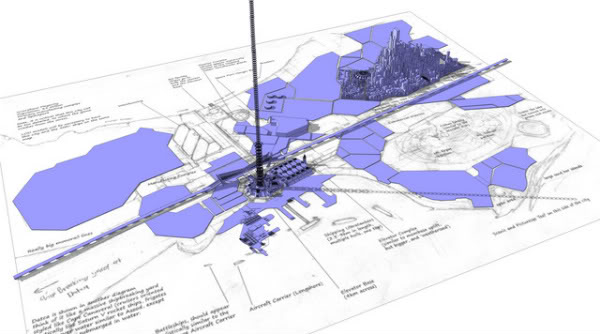 Fortify it, or raze it to the ground, the choice will soon be in your hands.

I've got several questions, if it's ok. First of all. Will the city and orbital elevator be a part of a planet, which will be a model as well occupying a large space on the map or will the orbital elevator just shoot out of the planet's image on the side of the map? Just wondering if you wanna get into stuff like Hogs, Scorpions, etc. I know that HW2's engine wasn't built for that. Doesn't hurt to ask, I guess. I just hope that my PC will be able to handle it. What are the system reqs?

Of course, we encourage question asking. To answer your first question, yes, the city/orbital elevator will be part of a planet model with an atmosphere, the city itself will be situated on top of another, higher detail terrain model which in turn be situated atop the spherical planet surface. Planets as you have seen them in the image gallery are simply spherical objects with no variance in topography. Since even the largest of our maps will not be large enough to encircle an entire planet, this higher detail terrain model will only occupy a small area of the planet surface, despite the player being able to transition between the surface and thousands of km in altitude in game.

If this doesn't clarify your concerns completely, don't worry, we will provide screenshots and diagrams later that will hopefully do just that.

Unfortunately, we do not anticipate on adding scorpions or warthogs for engine limitations and the fact that they would be too small to see or effectively use in game, however we do plan on adding defensive ground structures such as plasma and missile batteries, shield generators and mission specific buildings as subsystems to the model seen above.

Yes, thank you. I've only picked up on Halo about a year and a half ago and I love it. I'm more into the story itself, I've only ever managed to play Combat Evolved cause I don't have a platform for the others. I always hoped that Bungie would release a space-RTS but they probably never will. Homeworld2 with it's engine fits so many game universes, I love it. Keep up the great work. This MOD will probably be one of the best ever made.

hey man, take all the time you need, family emergencies are understandable

Like he said, family always comes first and I think most of us here understand. I know I do.

For those that want to actually see the image, here's a link to the full size: Liam887.files.wordpress.com
EDIT: Or you could just look in the gallery ~_~ my mistake.

The city is really f*ing cool. I'm thinking there's maybe too many skyscrapers and too many details on the elevator and surrounding area? Really, it looks like a ton of polygons. Can't wait to see some textures on it though.

Will there be life to the city? Flickering lights on the roads and buildings, a moving elevator and mag-lev trains, etc?

Animations such as a moving elevator tram and monorail cars are certainly possible, however thousands of moving street cars would best be handled by an animated effect.

Lights, such as the ones on top of skyscrapers, are easy to add, and there will be streets and freeways and a few monorail lines going in and out of the city as well.

Even the smallest ship is still pretty huge compared to a car or street lamp, so having the city overly detailed may not turn out so well in game.

will the buldings be destructable

as whole, more than likely

Some larger buildings such as the elevator hub, and the reactor complex may become physically damaged or inoperative under fire, however most of the skyscrapers are divided up into districts which themselves can only become damaged. Were leaning towards having every building in the district a static ship subsystem to the district ground (the ship), which would be an indestructible plot of land.

I haven't decided on whether or not we should have buildings destructible or not, we know from the vanilla HW2 that subsystems can become damaged, and also inoperative.

Too many subsystems seem to crash the game. I suggest grouping the buildings into blocks, and making those blocks destroyable subsystems. Then the "ship" model underneith the subsystems would have the appearance of being a destoyed block.

will there be clouds and the sea in the map. i think that this is a good idea but if you want to enlarger the map theres an old mod that makes the map the size of the soler-system

Yes, white nebula puffs will function as clouds within the planet's atmosphere, I hadn't tested this out before my hard drive failed, but I believe the effect will turn out nicely when I do get around to adding it in.

We don't want maps that are millions of KM in diameter because they would overwhelm the player, even a large planet in all that space could become lost, along with the entirety of your fleet. All this extra space would not be utilized in game either.

Is this mod dead now?