Last month we sent out a plea for some guys to help us finish off the mod. Luckily for us at least two people were listening. We welcome aboard Jenn0_Bing and Cpt. Ukulele to help us finish off the weapon skins and map props respectively. Like a good taskmaster we threw them straight in at the deep end with Jenn0 starting work on the K98 almost immediately and Ukulele tasked with the vital job of creating an army of door handles...

They really do add so much to the world! Small things like door handles we have found make a ton of difference in the game. Before we had boarded up doors signifying a non entrance, but it was just lacking without the door handle. Ukulele is going through our horde of props and replacing all the borrowed content with our own unique stuff and once he's done that its straight onto skinning all the unskinned vehicles and static weapons we have cluttering up maps. 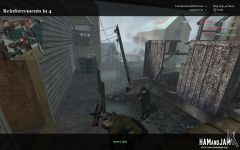 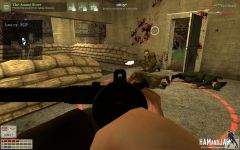 Talking of maps, all of them are progressing very well with Gold, Radar and Pegasus nearing completion. I have also taken on-board Spine's map 'Archery' to do final detailing of, as sadly he doesn't have time to finish it and it would be a shame for the map to never be released. Arnhem has had a bit of trouble in the balancing department but we believe we've now fixed it with the addition of some sneaky back routes.

In previous new updates you will have noticed we are using the Day of Defeat German player model, not any more! Jed has started the process of getting SacredLizard's player models in game and we currently have the base player (minus webbing and kit) model for the Rifleman (M40 helmet) and Assault (M43 cap) in game. The support guy I hear wears a rather natty smock, but you'll have to wait to see that. Look closely in a few of the in game shots and you can see the work in progress German strutting his stuff. 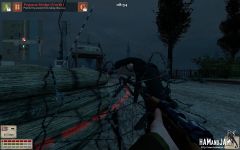 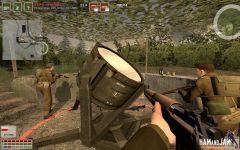 Code wise SteveUK has continued tinkering away with the code and the "To Do" list for first release is shrinking at a rate of knots, down to less than a page! Work on the Orange Box port is also progressing but focus is being given to getting the first version out on the Episode one engine rather than delaying for another few months to release on the Orange Box.

Whilst we're not a huge fan of renders we thought we'd show you these renders of what Jenn0 has done for us as at the moment we are experimenting with normal and phong maps in game. 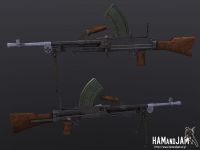 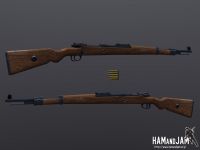 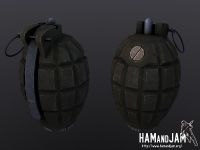 Next month we will hopefully have another video for you that fingers crossed, will show a lot more of the skinned weapons. As we speak I'm looking at a work in progress version of the MG34 and it looks good!

See you in a month.

Keeps getting better and better, I'm really looking forward to this. Awesome screens, keep up the good work!

Can't wait. Been watching you guys since you first went public a few years ago. I'm thrilled we're nearing a playable public release!

Looking good guys! The name fooled me completely but I must say I am really excited to see how this turns out. Keep it up.

Looks like day of defeat source and i love that game only problem i dont have it :D
So if this will be atleast a little like dod source then its my kind of mod :DDDD

Actually like the fact that you guys didnt follow the trendy aliies shoot all nazis... and D-Day realy annoying, every WW2 shooter is pretty much the same thing over and over, just feels like a different soldiers perspective everytime (some very incompetent ones too, gameplay awfull lol) But here you guys doing WW2 in a breath of fresh air... For that, I must say you guys rock, Cant wait for the release =D

Jenn0_Bing... That sounds very familiar, what else did he work on?

Black Mesa Source is one other mod he is working on.

For some reason, this mod reminds of WW2. Great WORK!

great work guys. i see a hint of original dod which is even better.

Do you need any help mapping? I can map for you if you do need help.