So we didn't reach greatness on indiegogo, but you shouldn't count us out yet!

Unfortunately, our indiegogo campaign didn't reach the numbers we'd hoped. But then the greatest of victories have often been preceded by terrible defeats, and we remain unfazed. The Red March continues, and we still need your help to spread news, information and the links to our pages.

But rather than just tell you this, we have some pictures to do the talking too: some renders of a PT-76 and a T-55 by our newest member, Ilves, whose work on "Rogue Republic" has been truly inspirational. Now these units won't necessarily be in the game, and we don't even have a unit list yet, but we have been practising our abilities and we do have the intentions of creating units with a similar scope. 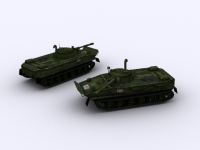 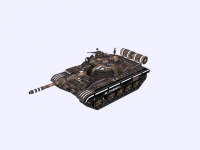 Also in this update, a few pictures of the Soviet War Factory, also by Ilves. Soviet tank production will be impressive to say the least, and this building may just become the central focus of many a Soviet Player. 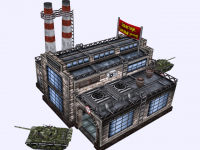 Other news? We're progressing slowly. Most of us are back at work or education, as you'd expect, but we are working our way towards a playable first build to show off to all of you. We are also working on a website with official forums, and there is also a little work on a few high level and imaginative gameplay concepts.

Stay tuned, comrades. The Red March has become quieter, but continues with no less dedication than before.

Around a month ago, we started an Indiegogo campaign to raise funds for an indie based on Red Alter named Red March, which would use a different engine, however we fell short by a large margin, hence why we are now doing much more legwork before we go for a second crowd-funding attempt.

It didn't, unfortunately, hence why we're waiting to go in again. But here's hoping that the second attempt is a lot more successful!!

Will you still be releasing this as a mod or a stand alone game? A mod would be truly appreciated but I would still buy the game if it came to that.

We are still working towards a retail release, but we are first producing a working alpha before any further funding attempts are made. Likewise, we are considering steam greenlight, but this will most likely come much later.

We are also working to put together a mod package that has all the work we have done so far, but again, no telling when that will be released as most of the effort currently is going into alpha design or concepting.

Thank you! Having even just the soviets in the mod would be really great. You pay great attention to detail and have my full support. I will gladly buy your game when you release it.

Many thanks. We do what we can. Hopefully see you on the battlefield some time soon! :)

Thanks! Your support means a lot to us, and we hope to have a lot more to show you very soon!