I’ve had a hell of a time trying to find an artist to work along side me on Noble’s Land. I was frustrated to the point that I stopped looking altogether. It seems I’ve hit the jackpot, or rather the jackpot hit me! All of the artwork in this Developer Blog post was created by Noble’s Land’s second team member, and the first person besides myself to join the team, DEV Harvest. Here’s a look at what you can expect to see during your adventures while exploring the world of Noble’s Land:

I’ve had a hell of a time trying to find an artist to work along side me on Noble’s Land. I was frustrated to the point that I stopped looking altogether. It seems I’ve hit the jackpot, or rather the jackpot hit me! All of the artwork in this Developer Blog post was created by Noble’s Land’s second team member, and the first person besides myself to join the team, DEV Harvest.

DEV Harvest wasn’t contacted by me, he took the job himself! One day he just popped up on the forums and he’s been blowing my mind ever since. He’s everything you could ask for in an artist. His work is consistent, attractive, unique, and best of all speedy. The majority of the artwork in game has now been created by him, he’s even gone back and replaced programmer art I had created before. I’m extremely grateful he’s helping me bring my dream to life. I hope he stays around for a very long time. Here’s a look at what you can expect to see during your adventures while exploring the world of Noble’s Land: 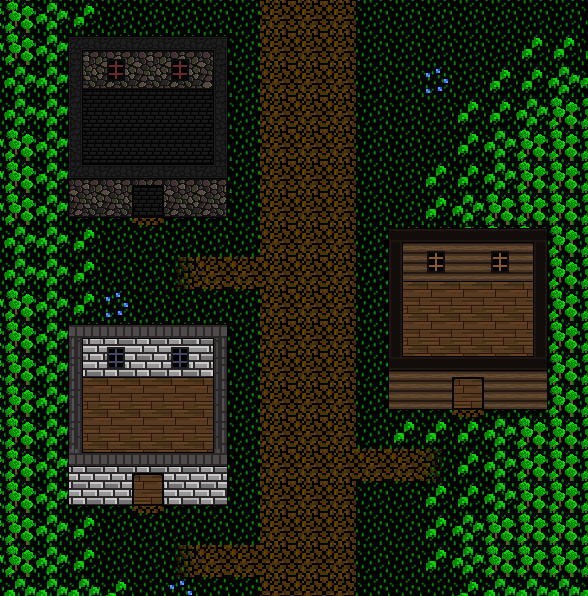 Up until this point there was just the brick walls with the wood floors. Thanks to DEV Harvest there is now also wooden and fieldstone walls to accompany the original brick ones. Each wall type also has two kinds of floors, the original wood style and the new dark brick style. Each building type also has their own unique windows as well. With each wall type having two floor styles there is six unique buildings that can be place around the world. 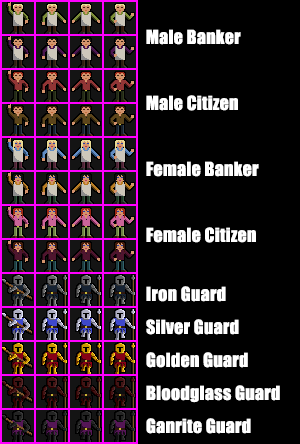 These new NPCs were made to not only replace my ugly programmer art but so all humanoids will respect the same anatomy. Guards will now use the same types of armor that players do. Guards work for guilds that have access to the same materials and crafting tools players will throughout the game, it only makes sense they would wear the same equipment.

The cloth tabards the guards are wearing don’t reflect the type or armor they have on. Instead the tabards identify what guild that guard belongs to. This is related to the next topic, Heraldry. 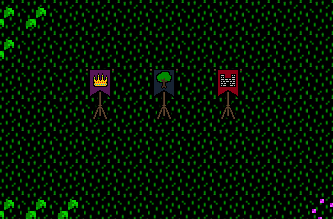 When a player completes a particularly challenging quest line they will be able to create a guild. At the time of creation the guild leader has to pick a color and symbol that will represent the guild. There will be a bunch of stock symbols to pick from but as a premium feature a custom icon can be submitted and added into the game.

Through the story and lore of Noble’s Land there are NPC controlled guilds that you will cross paths with throughout your journey. For example, the purple banner with the crown is the flag for the capital city Baile. Quarantine Hold, the settlement new players start out at, is also under Baile’s rule and their banners can be seen around town. Guards in these controlled areas will wear that guilds color and symbol on their tabards. These guard’s will also have a rare chance of dropping a unique shield with that guild’s symbol on it. Evil, or just badass, characters can collect and display their shield collection of all the guards they have killed along the way. 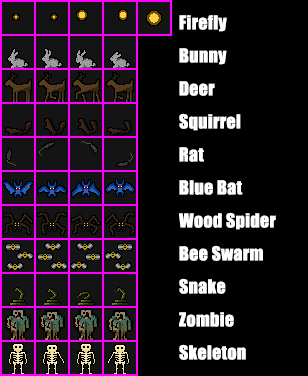 Due to a recently undiscovered fungus, the corpses of recently deceased survivors have been seen moving around aggressively. Some potent strands have been rumored to infest the skeletons of completely decomposed corpses.

In order to defend yourself against these new creatures, and PVP attacks, your going to need some equipment. Many of the materials used to create the armor sets has been replaced with some original designs. When a full set of armor and a weapon of the same set are equipped your character will transform into a subclass. Ore based armors, when worn, transform your character into a Warrior. 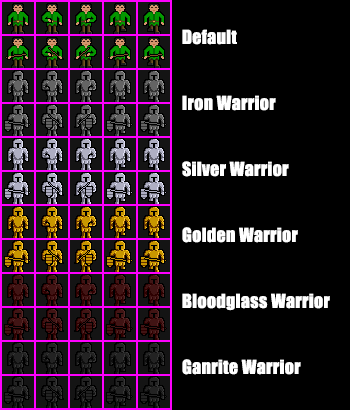 To acquire these armors players can be really lucky and find a humanoid enemy and hope it drops it, loot a fellow player and ruin their day, or more then likely craft it themselves. To get started you will need to purchase a pick axe and head out to find some ore. Mountain tiles can be mined for ore, different types of mountains will produce different types of ore. The ore can then be taken back into a town and smelted into ingots. Standing next to an anvil and using a hammer on your ingots will open the crafting window and allow you to attempt and craft a piece of equipment. 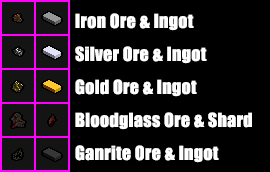 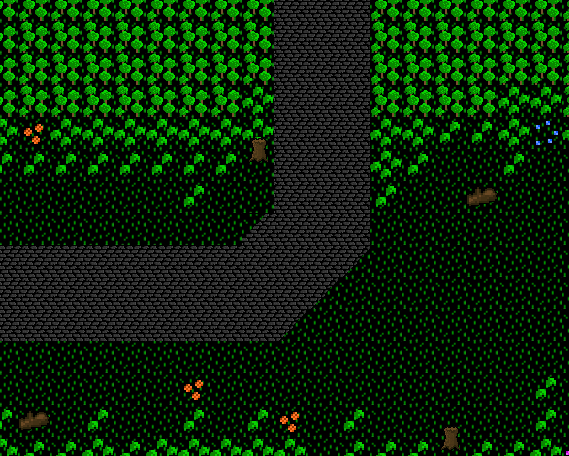 When creatures die in Noble’s Land they don’t leave dead bodies. Instead, the items that a creature drops go right onto the map. The most valuable and rarest items go to the bottom of the pile and the more common items on the top. There’s a random chance blood splatters will be on the map below the items. They can start out at any size and will gradually get smaller over time.

When out farming solo it might be a good idea to “hide your tracks”. You drop your backpack, it’s contents, and one random piece of equipment when you die and PVP can happen anywhere except for safe zones briefly scattered around the world. Because of this players will scout well known hunting areas for signs of activity. Leaving items on the ground, or piles of blood are a sign AT LEAST one character was there recently. To combat this there be ways to disguise or remove blood. You can always leave the blood and items, you’ll just be taking an extra risk.

There is some more artwork from DEV Harvest but I’m going to be saving those for the next post which will be a Video Update demonstrating Map Objects,