Post news RSS A football match in an RPG - really?

The battle system of the A.Typical RPG is the area where it's at.
What is it, you might ask? Well, the 'it' here is innovation, my dear friend.

My pet peeve with traditional turn based system in traditional 2D RPGs is that it doesn't feel realistic enough. And by realistic, I mean it doesn't represent what should actually happen in the battle accurately. Suppose a character Arvind is awesomely fast and all powerful and handsome and rich and gets all the ladies and...okay, got a little sidetracked there. And let's have a character, say Captain Pathetic, who can't move 10 feet in an hour even if his life depended on it.

If I would expect a battle to take place between the two characters, I would expect Arvind to beat the stuffing out of Capt. Pat over and over till each and every atom of his body has dissipated into oblivion. However, in a turn based system, Arvind will take one turn, then Capt. Pat will take another and so on.

To remove this limitation, allow me to introduce the battle system of the A.Typical RPG. It uses a unique algorithm to generate a sequence of turns instead of offering turns to all characters one by one (boring).

A concept of the system : 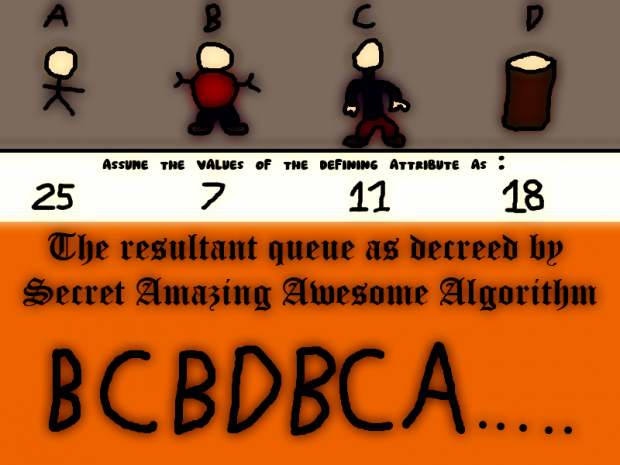 Verdicts on the atypical system?