We've got Cages and Chest Animations and a lot of little things.

Welcome, This is Kyle Gordon, Co-Creator and lead asset designer of Loot Nubs, here to showcase some of the progress I've made this past week. This week I moved away from constructing the buildings to focus on some other little things that needed to be done. My first task, and most important, was to create the loot chests and all of the interactions that it has. Loot chests are rewards for defeating elite nubs and clearing Dungeons. When you tap on a chest 2 Nubs appear to pick it up and carry it along with the rest of your nubs. Once you arrive back at town the chests are retrieved with each on shooting upward into the sky. Now if you have a Loot vault with some free space you can open the chests and recieve your loot.

This is still a work in progress, I've been given some feedback and so now I plan on removing the 2 nubs that appear from out of nowhere and instead I'm going to have actual nubs from the group carry them. Also the Particle effect will be given a proper coin sprite to use instead of the default sprite. 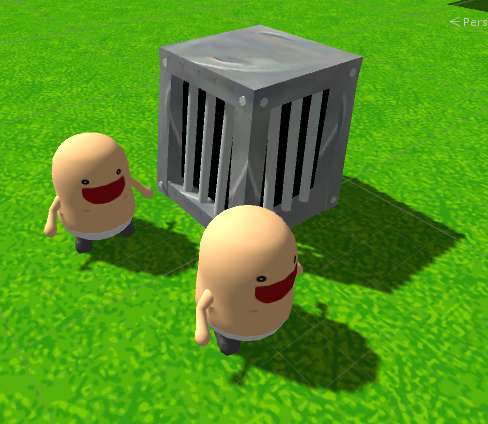 The Cage is one of the Points of Interest that you can find in the world of Loot Nubs. These cages contain a random Nub thta you can rescue and recruit into your mob. Each cage is protected by 2 Goons which are smaller elite nubs that do not reward you with loot chests. This one was easy, took no more than 30 minutes to make and overall they look pretty good. I plan on creating a unique model for the goons as I would like to do for all of the different Nubs.

After I completed these I went along and fixed a bunch of small things in our game that either needed updating or were completely broken. I won't go through too much detail because even I couldn't fully keep track of everything I did this week. One of the larger tasks was reducing the lag that would build up as you play, this was caused by mobs that were still active even when the player was far away from them. To fix this I just made it so mobs despawn when they are a certain distance away, this also solved the problem of there being too many mobs at the same time as mobs were still spawning without despawning the previous ones.

Another task I completed was the terrain generation, most of the work was done by Shane, but there were still a few errors that were occuring. One being that if you moved far enough in one direction you could reach the edge of where the terrain was spawning. This was because terrian in spawned whenever the player has move the length of one of the terrain tiles. But what he was doing was using an interger which can't hold onto a decimal value and so it caused some inaccuracies when determining how far the player actually moved. this meant that the player would slowly move away from the centre of the tiles and eventually reach the edge as tiles would not spawn soon enough.

the Last few things in this wall of text are minor things like; Fixing the dungeon interactions and UI, fixing the interactions with the Points of interest in general, fixing the new training system, fixing the building reference collection and smaller things concerning player movement and enemy interactions.