Path to Victory for Homeworld 2 is back in business and working towards a next release. Detailing some of the mercenary ships that will appear in the new version.

Roughly a month ago (don't kill me if I'm off by a week - or two... or even four) Path to Victory 0.0.6 was released which included the Raiders as a playable race. And then - all the sudden - I disappeared.

Thing is, you can't go on making models day by day for months and not get bored eventually and need something else to do. Moreover, modding sometimes feels like a full time job and I needed a break - back to Real Life for a month.

Now I'm back with a clear head and a clear goal: Bring Path to Victory to the Beta stage. There's still a lot to do and many of it is boring, tedious stuff like debugging the mod and making sure all the ships do what they're supposed to, that all the races are fun and and and, you get the idea.

However after talking about how boring and whatnot modding is (which isn't really the point of this post) I'd like to talk about the really fun stuff, the stuff you will eventually get to play with. So, now the actual news post:

A Day on the Job

Over a hundred years ago the capital of the Taiidan Empire - Hiigara - was reclaimed by its ancient owners, the Hiigarans. Shattered in two, the Empire was no more. What remained was the Taiidan Republic and the remains of the Empire often referred to only as "The Imperials".

For a long time following the first Homeworld War The Imperials were hunted extensively. Hiigaran High Command deemed them too dangerous to be left alone and many a year was spent with Hiigaran Carrier groups hunting down lone Quaar-Jet cruisers and spliter fleets drifting through the remains of Taiidan Space.

However with the coming of the Vaygr Invasion the Taiidan were suddenly no longer deemed a threat. The great warfleets bearing down on the homeworld suddenly seemed a lot more dangerous than some lone captain in a slowly aging cruiser.

With the pressure of the Hiigaran Navy removed, many Taiidan Captains turned mercenary, offering their ships and skills to the highest bidder. This was the beginning of notorious Mercenary Bands such as the Black Guard, Imperial Suns or White Hands.

These mercenaries quickly became known for their impressive combat skills and rigid, professional, discipline. To many a Taiidan mercenary it was not much different than serving in the Imperial Navy as many had done during the Wars.

If the pay was right, they would fight for anyone. Today we will follow a group of Black Guard mercenaries who have just gained employment by a notorious Turanic Pirate Lord: Captain Morgan.

Fighting for piratess was not the most glorious thing any Pilot in the Black Guard could think of. It was risky - Turanic pilots were not known for being careful. It was just as likely you'd be shot by a "friendly" than an enemy fighter. But the Turanics did pay well. If you lived you could expect to go home a rich man.

Mercenaries tended to keep to themselves, contacting their employers only from afar when they took their orders. From that moment on they functioned much as a separate fleet pursuing the objectives they had been given.

In this particular case it was to clear a Hiigaran Ion Cruiser blockade that was keeping said Pirate Lord from wherever he was going. Apparently he was in a bit of a hurry too. None of the Black Guard really cared why.

But the chance to engage their great enemy in direct combat was not something that any Imperial would ever give up. It was commonly knonw that one day the Empire would rise again and those faithful who had fought in the Name of the Emperor (whoever the hell that was) would be greatly rewarded.

Simply put, it was the honorable thing to do: Kill hiigarans.

Armed with heavy autocannons and plated more heavily than most other fighters of their class, this advanced fighter would serve at the front of many an attack. 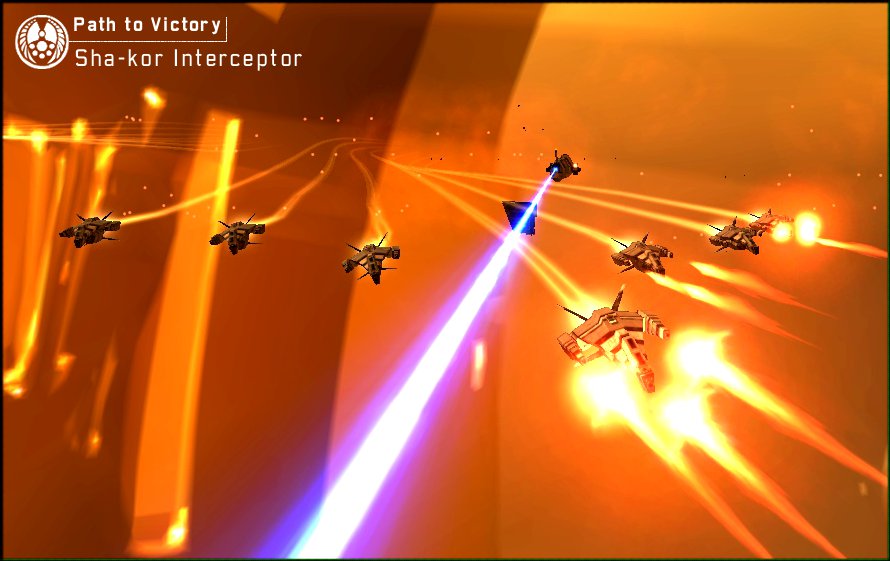 Frequently the Sha-kor was complemented with Chaarok Gunships. Derived from the old Heavy Corvette chassis, the Chaarok was specifically built to destroy enemy fighters and corvettes with equal ease.

Though not as effective against strike craft as the now aged Diirvass Multigun Corvette, the Chaarok makes up in versatility and the ability to engage anything from fighers to frigates. The heavy mass drivers it carries can puncture even the heaviest armor and their high rate of fire ensures maximum damage in a short period of time.

But to any Chaarok pilot it is the sensor pod beneath his cockpit that defines his ship. Capable of scrambling enemy sensors and detecting enemy ships at a great distance, flying a Chaarok made you feel in complete control of what was going on.

The engagement was fast and furious. The Black Guard were soldiers by trade and even the Hiigaran Imperial Navy - at this stage generally crewed by fresh recruits and even conscripts - stood no chance.

Their defensive fighter wings were dismantled in seconds by the veteran Merc pilots, leaving the destroyers undefended. They fought hard but lack of experience in live combat would take its toll. It would not be long before the Black Guard Cruisers tore the crippled Hiigaran Destroyers to shreds. 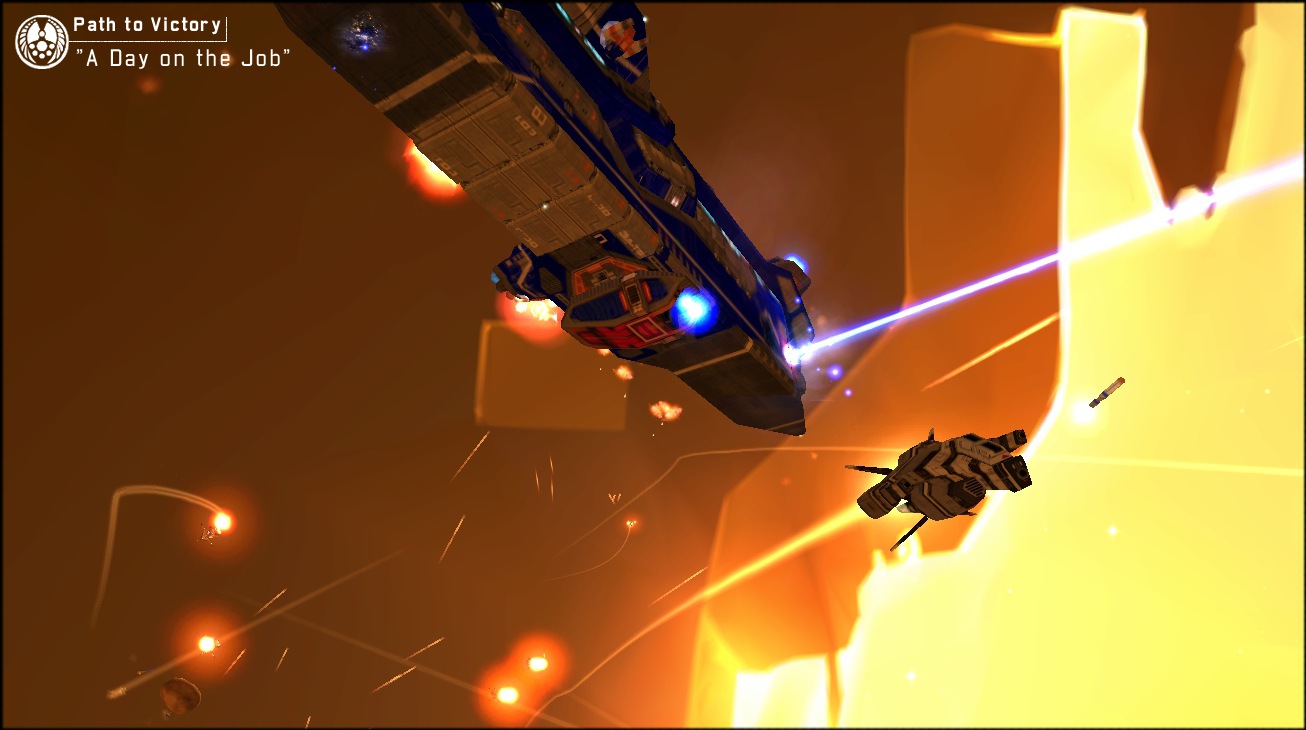 There is no ship quite like the Quaar-Tel in the Taiidan Navy. Based loosly off the ancient Quaar-Jet heavy cruiser the Quaar-Tel is a compact ship designed to cary heavy weapons to the front. Its main armament is a turreted Ion Cannon and 4 heavy mass drivers make up the secondary guns.

All in all, the Quaar-Tel is excellent at destroying individual capital ships and frigates, making it an ideal weapon for mercenary bands who want to hit fast and then retreat - just as was the case here with the Black Guard.

Even the Hiigaran Ion Destroyer - Prized of its Class - would crumble in a few seconds.

In a matter of minutes the battle was concluded and the Black Guard fleet pulled back. Their job was done. All that remained to be done was to collect their pay and move on to the next contract. There were always jobs to be had...

Always a need for the Empire's finest.

i do love myself a good novel. and this is about as good as it needs to be, and just the right size when i have a headache \o/
and those screenes are just... mhm, tasty!