We'd like to say a merry Christmas to all our fans by showing off a render of the Junkers Ju 87G-1 "Kanonenvogel" anti-tank aircraft.

Before we begin, the whole team would like to thank our fans for all their support, and to wish you all a merry Christmas and a happy new year!

This time hiding away under the tree, is a render of a vehicle that brought destruction from the sky. The Junkers Ju 87 G-1, also know as the Kanonenvogel. 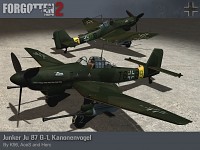 The large numbers of Soviet tanks that had shown up on the Eastern Front had lead to the requirement for dedicated antitank aircraft. The first such design was the Henschal Hs 129, but while it proved a potent weapon, it had large and vulnerable fuel tanks and a replacement was requested.

It was decided to further develop the Ju 87, arming it with 30mm cannon and providing more armour. The Stuka ace Hans-Ulrich Rudel had had some success at killing Soviet tanks with 20mm cannon, and suggested using two 37mm Flak 18 guns in external pods as a primary armament. First flown in January 1943 on a converted D-1, the Bordkanone BK 3,7 would prove to be a lethal tank killer in the hands of Rudel and other Stuka aces.

Our Kanonenvogel (cannon bird) was made by K98, AceS and Herc.

The guys over at [762], Forgotten Honor and World at War have got together to make a mappack featuring 17 of their best custom maps. They can be downloaded now and played on the [762]#2 server. Find out more here.

Our winners for this week's screenshot competition is SzalonyGolibroda. You can view the winning submission here.

We are now accepting entries for the week of December 29th. If you think you have the best FH2 screenshot, post them href="http://fhpubforum.warumdarum.de/index.php?topic=16835.0">here.