So, changes. Actually more changes than depicted on this picture: 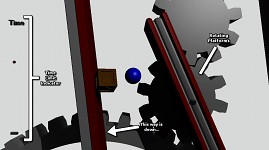 But I didn't have the patience to get through a narrow spot so that I could close in on the turrets. Sorry. What you see here are basically two things:

If you are too slow, you are done for. I can't tell for sure how long the ball takes to get all the way down, but it's adjustable per-level - it can have 1x, 2x, 0.5x and 0.25x the time. When the ball reaches the small block underneath it, it resets the level. Not depicted: Powerups that give you extra time.

They come in two versions: Red and Grey. The red one, just like the walls, kills you instantly, while the grey ones just bounce you around (which, come to think of it, will most likely end with you hitting something red). The platforms are rotated by the cogwheels in the background, which looks badass in motion.

What is not in the picture?

So... yeah. That is about it. Any questions?