The beta gets and update, new member joins the team and an all new forum.

Hello and welcome to update number 9. Some new stuff has happed this week. First off i want to say a big welcome to: kerloc Moddb.com

He is the new triggerer in the team for the mod. So no more noob triggering! He fixed allot of buggs that was in the Beta so theres now an updated version for it, go here for the download: Moddb.com warcraft-3-the-cries-of-the-woods-beta-12 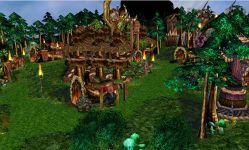 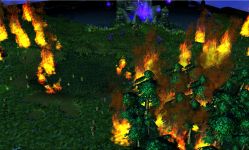 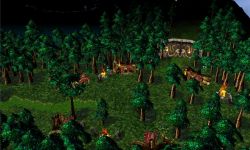 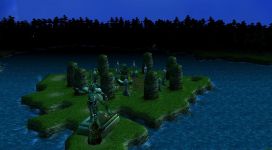 Now I'm happy to announce the new FORUM for the mod created by Kerloc! Now you can go the to Talk and ask questions about the mod. So be sure to visit Tcotw.forumotion.com

So i thought it was time to tell you all the Story of the mod so with no further of do here it is:

The furbolgs are a race of bear-men who traditionally shared the forests of eternal night with the elves. These simple and peaceful creatures lived in harmony with the forests for generations. They were great friends and allies of the night elves, providing their Sentinels with information about the comings and goings of the forests, and warning them of potential danger.

Warcraft 3: The cries of the woods Takes place in the same time as the Original Warcraft 3 Campaign. This was before the Furbolgs were corrupted by the burning Legion. The Main Character is Emaron a Mighty Furbolg that Helped the Night Elves when they were in greatest need. The night Elves gave him a gift. It was the Great crystal sword called: Glandur. Sence then Emaron has gone in Exile. He needed no more war he just wanted to live in peace. Until the day when the mighty bear god Ursol spoke to Emaron in a vision. He told him a great threat is on its way to the great forest, and if it succeed world would be forever lost.

Ursol told Emaron that he must warn his people and tell them to either run, hide or fight. This is where your journey beggins.

Here is some Furbolg history taken from WoW Wiki:

Furbolgs originated from Northrend. They lived on Azeroth before Titans came to the world. Their oral histories speak of the first time Titans stepped on the world and roamed the wilds. Furbolg may have descended from early pandaren who settled up in Northrend, becoming more feral; or furbolg of Northrend may have discovered Pandaria and their culture became more contemplative.LoM 85
War of the Ancients

Though the furbolg were around at the time of the War of the Ancients 10,000 years ago, they did not take part in the war against the Burning Legion.

However, due to a disturbance in the timeline instigated by the Old Gods, the original timeline was altered. In the new timeline, they were convinced to join an alliance comprising of the night elves, the earthen, and the tauren, against the Burning Legion, created by the dragon-mage Krasus. It was a reluctant truce (many night elves were xenophobic towards the "lesser races") but ultimately successful, and formed the foundation for much of the familiarity and peace between the night elves and later furbolg generations. (It should be noted that other accounts corroborate that this happened, proven by the fact that the blue dragonflight currently exists.) They were led by Unng Ak.
A furbolg from WC3.
Recent history

However, the furbolgs' close connection with the forests was exploited by the Burning Legion during the Third War. As the forests were corrupted, many furbolg tribes became tainted with evil or went completely mad, and began attacking their former allies and destroying the lands they once protected. Individual satyr such as Xandivious and Xabraxxis are also known to be responsible for the damnation of entire tribes.

What once were believed to be only whispers and rumors of attacks by savage and cruel bands of furbolg in the night elves' enchanted forest have become an increasing concern for the Sentinels. It is thought that the passing of the Burning Legion and the vestiges of its demonic taint drove the simple and peaceful bear-men to madness. Their aged and wizened leaders have been replaced by ruthless firebrands who lead the crazed furbolgs to prey upon the denizens of Ashenvale Forest. Where the furbolgs coexisted peacefully with the night elves for ages, with claw and fang they now seek to carve out their own home in the endless forest.[3]

Currently, many of these renegade furbolg tribes remain on the loose, and are considered a grave threat to nearby settlements. Those few furbolg tribes who do remain uncorrupted have become withdrawn and suspicious, fearing that any outsider may bring corruption and madness to them as well.

Hope you have enjoyed this post and i hope you will enjoy the mod when it releases.