Weekly Update Number 2 for "Battlefield Vietnam: Operation Remembrance": Current progress, and the changes that make the M79 grenade launcher far more useful than ever before.

Unfortunately, this past week has been a busy one for me because of other projects, so I haven't had time to do much with Operation Remembrance. However, I have been able to get Operation Hastings and Landing Zone Albany close to finished, and I rewrote the loading screen text for Nung River Mouth (previously Operation Irving). Hopefully I'll be able to devote some more time to working on OR within the next week. I'd like to finish all the maps that are currently in various states of completion as listed here and in last week's update, and maybe work on some other maps as well by the next update.

I liked the M79 back when I used to play the original version of Battlefield Vietnam, but between its low ammunition, ridiculously arcing trajectory, and low blast radius, as well as it being placed in a kit with the M60 machine gun, it seemed more like a novelty than a genuinely useful weapon, unless I was going up against tanks with the M60 kit-then it was all I had to fight them.

In Operation Remembrance, this isn't the case. The new M79 is not only a much more effective weapon overall, there are now four variants firing different types of ammunition. The projectile's velocity has been increased from 30 meters per second to the technically accurate 76 m/s. This drastically increases the M79's effective range; I've been able to use it effectively out to 350 meters! The explosive round's blast radius has also been almost doubled from 11 meters to 20, and the iron sight has been rotated into the upright position, although this is purely for visual purposes and the sight can't actually be used. You still have to estimate the firing angle using the HUD crosshairs and your judgement. I think the rotated sight was also done in "BfV: Arsenal" but I coded this myself before I knew about the Arsenal M79. Lastly, the ammunition pool has been increased from 5 carried grenades plus one in the launcher to 30 carried grenades plus one in the launcher. This might seem high, but actual M79 grenadiers usually carried a full 36 grenades. Instead of serving as a companion to the M60, the M79 now belongs to its own kit: the Grenadier class.

The second of the four M79 types fires a buckshot round. Historically, one of the M79's flaws (in official military records) was that it was so large that its operator could only carry it with a pistol, and they couldn't use the M79 against an enemy up close. A buckshot round was developed to solve this problem, but unofficially, some troops carried a submachine gun or CAR-15 with their M79 instead. Operation Remembrance has both of these features: on some maps, your main weapon for the Grenadier kit is a submachine gun or CAR-15, and in others, it's an M79 loaded with buckshot rounds. This version of the M79 is essentially a single-round shotgun, and does as much damage as any regular shotgun round in Operation Remembrance; likewise, it is also capable of killing multiple enemies if they're grouped close together. Unlike the other three M79 variants, the buckshot version has its iron sight left in the down position, providing a quick reminder that you have buckshot loaded, not a grenade. I came up with the coding for this weapon myself, but a similar version of the M79 appears in "BfV: Arsenal" and the weapon icon for the buckshot M79 was taken directly from that mod.

The third type of M79 fires a grenade that releases a cloud of white smoke on impact that lasts for 45 seconds. This is useful for marking targets for airstrikes or blinding your enemies during an attack or retreat. A direct hit by a smoke round against a soldier's body will also kill them; on one hand, this seems silly, but on the other hand, there is some real-life basis: before the advent of buckshot rounds, sometimes an M79 operator confronted within the explosive grenade's minimum arming range would simply fire the grenade directly at their enemy, hoping the round acted like a large, slow bullet. One thing I will point out: the smoke variant of the M79 is useless on singleplayer, unfortunately. This isn't my fault. It's a limitation of the game engine; bots simply can't be programmed to be blinded by the smoke effect. They see right through it. So if you use the M79 smoke round on singleplayer, at best you're wasting ammunition, at worst you could wind up blinding yourself if you move towards or into the smoke cloud. But it's excellent for use against other human players, and bots will fire the smoke rounds at enemy vehicles.

The last M79 variant fires a flare round. This is most useful on night maps, where it can be used to provide illumination for the battlefield. Note, however, that due to limitations in the game engine, the flare's effect will disappear unless it's in front of you. The moment you walk past where the flare is falling, the light effect will disappear and that's something I don't think can be changed. If you're firing it to illuminate an enemy position in preparation to attack, fire it at an angle so it bursts above and slightly beyond the position you're attacking. Like the smoke variant, this version has no effect on bot performance, but can help both you and other human players. 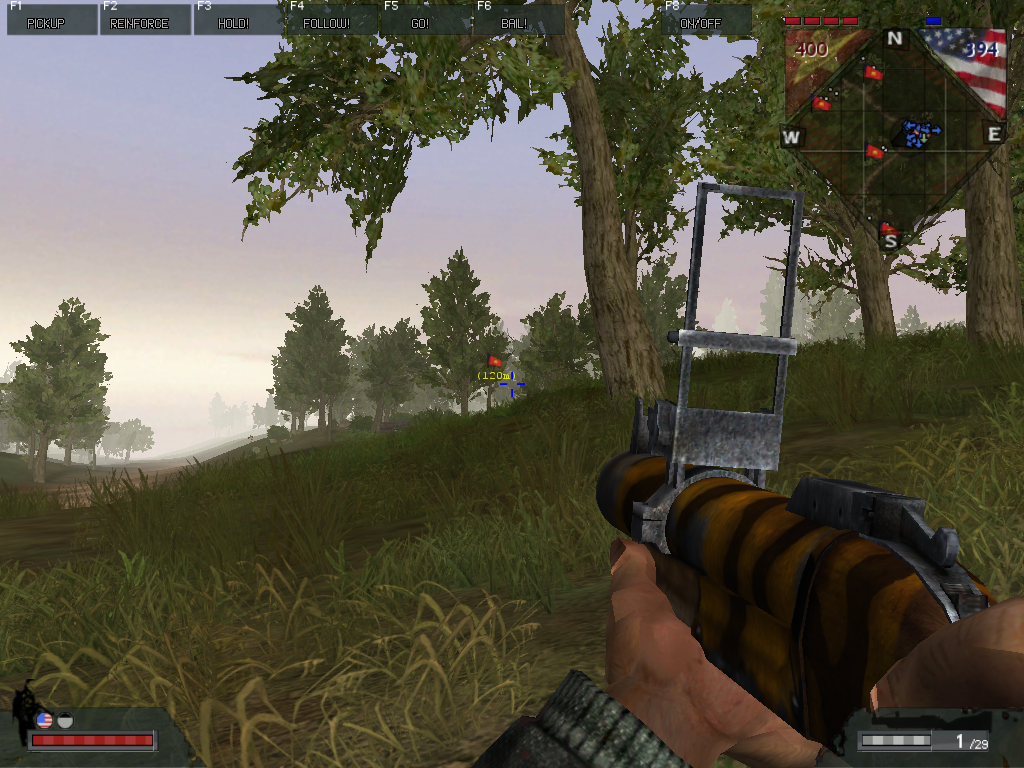 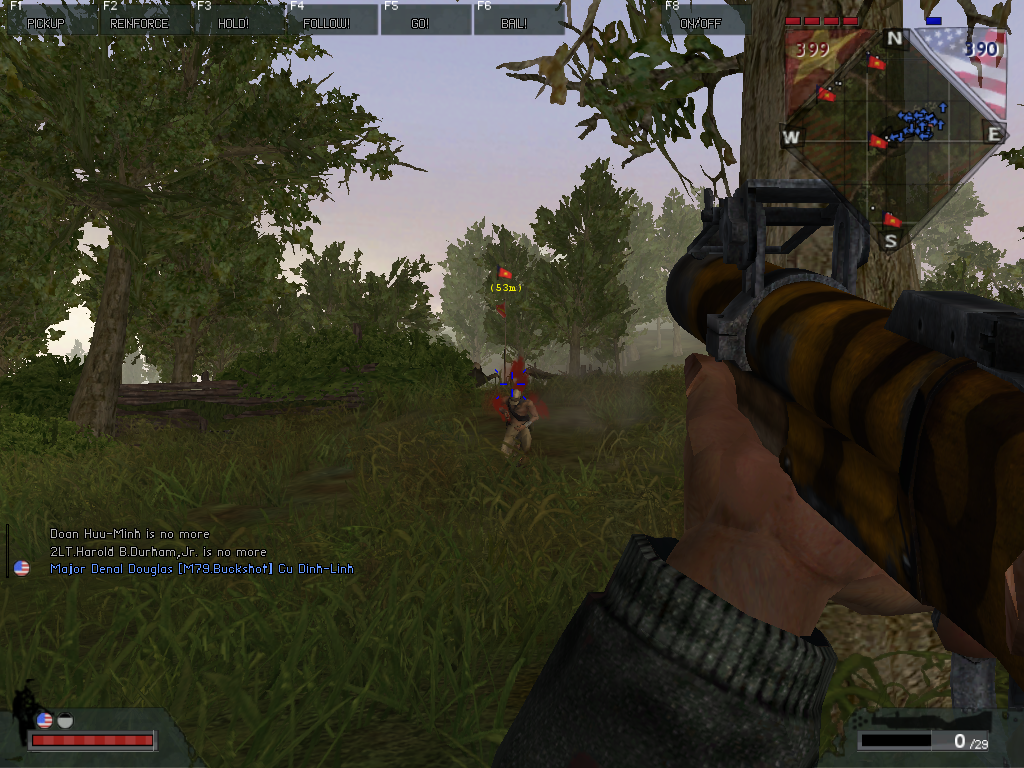 A buckshot round being fired from the M79, killing an enemy player. Note the iron sight in the downward position like in the base game, a feature unique to the buckshot version of the M79 for Operation Remembrance. 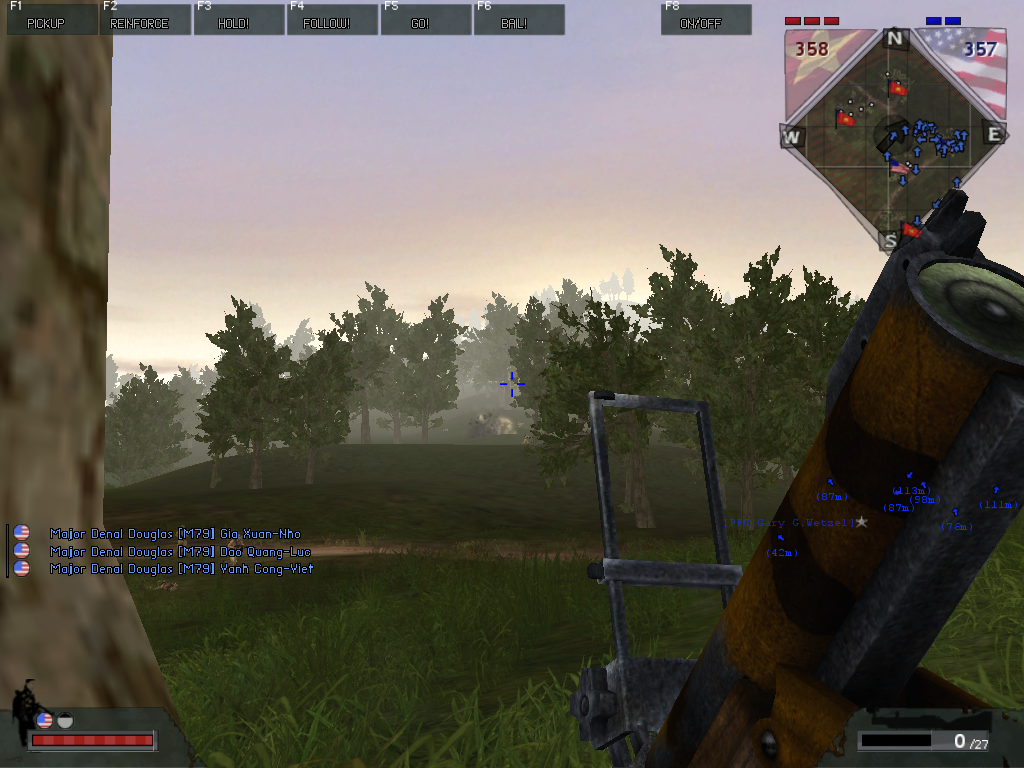 The M79's high explosive round being used to great effect at long range, killing three enemies with one shot. 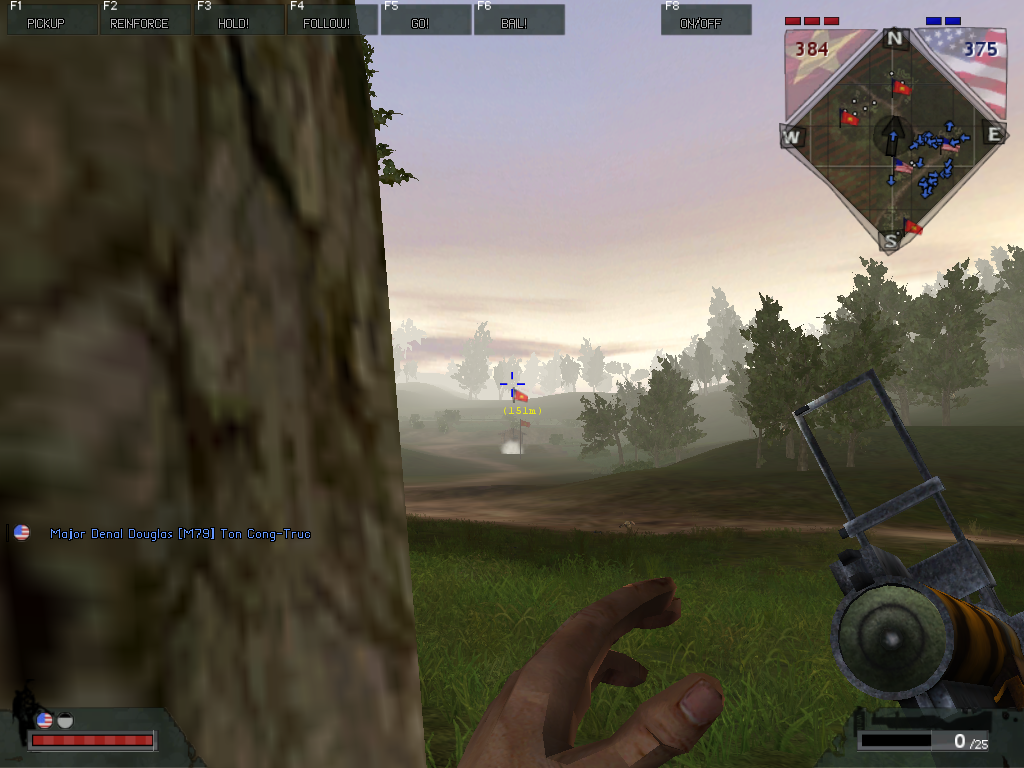 A smoke round from the M79 bursting in front of a small hut occupied by the NVA. 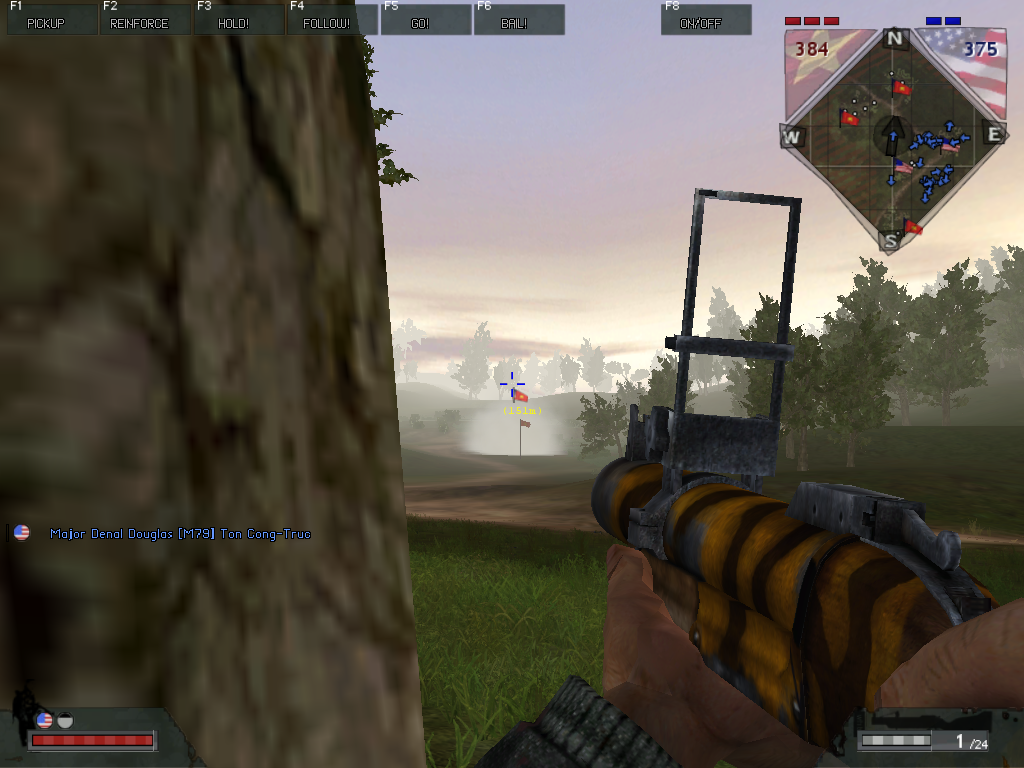 The fully-formed smoke cloud engulfing the entire hut. This smoke effect is a slightly modified version of an effect taken from "Bf1942: Forgotten Hope Secret Weapons".