Last time I posted I talked about the feedback and changes I would be making based on said feedback. I based my decisions on what to change and rethink based on the frequency of a particular issue or request. I tackled the insanely long “game over” issue and updated immediately, so people wouldn't have to wait every time they died. That was the single most brought up issue.

Okay, it has been a minute and I haven't posted as much as I would like. But I promise it's worth it.

Last time I posted I talked about the feedback and changes I would be making based on said feedback. I based my decisions on what to change and rethink based on the frequency of a particular issue or request. I tackled the insanely long “game over” issue and updated immediately, so people wouldn't have to wait every time they died. That was the single most brought up issue.

Player Directional issue :
Artwork is updated and all in game. I added an aggressive look and backpack to 505. The addition of the backpack brought an unexpected idea and implementation to the game... The 'Holo-Spawn' A friend said “it would be neat to get an extra life and then your backpack would be able to drop a re-spawn point”

Holo-Spawn : (WIP)
Now when you collect an extra life by finding the secret room just right of the first elevator by shooting the blocks repeatedly – yes seeing if people actually read my shit cause, I just gave away a secret :) The light on your backpack will turn from red to green – then you can hold the B button or C key for 2 seconds and drop a Holo-Spawn point. This will save your progress from that point on. When you die after dropping a spawn point you re-spawn at that point. If you don't drop a spawn point you start back at the beginning of the level and no progress is saved. 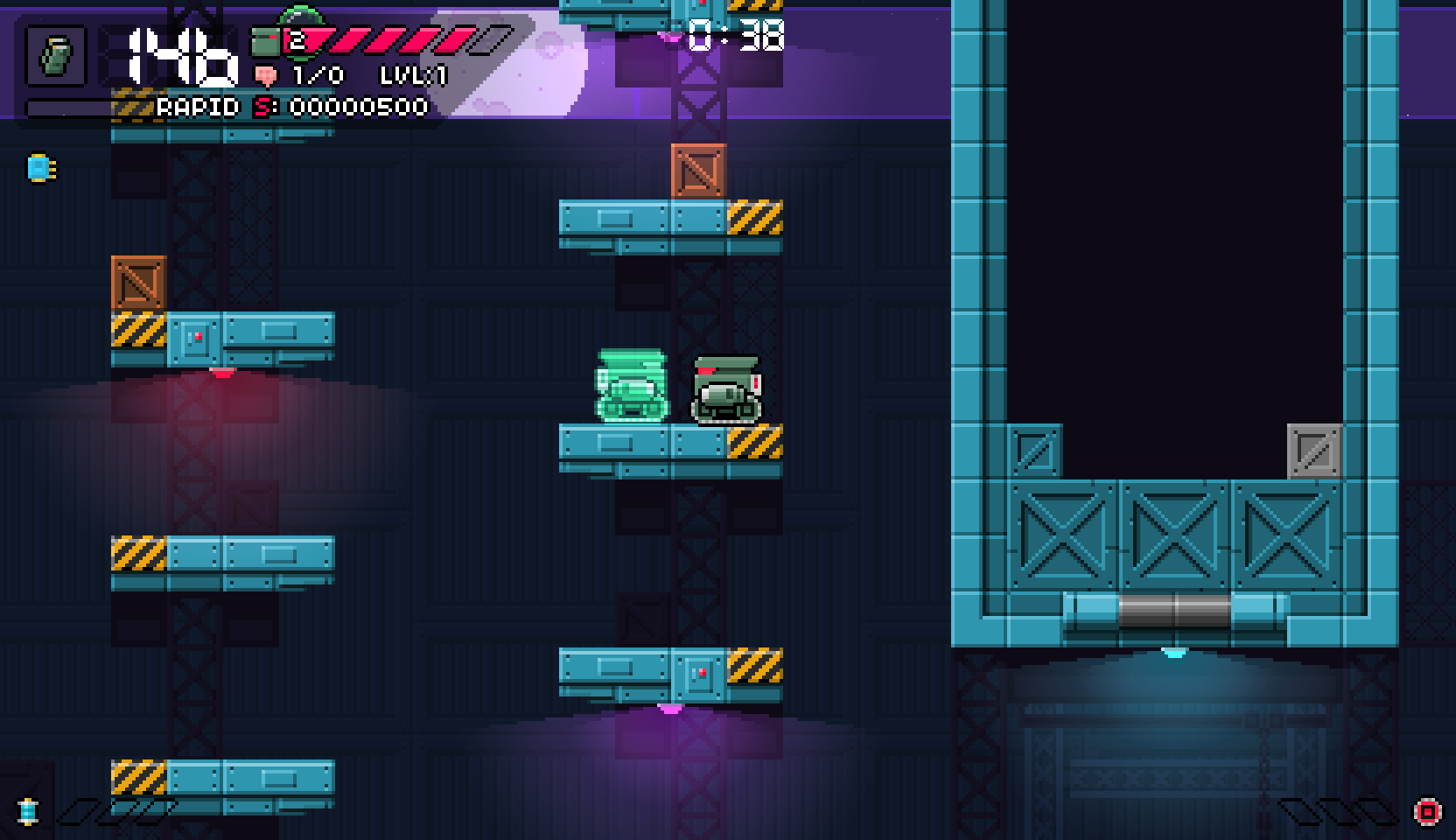 HUD Useless Info Issue :
The new HUD changes are now updated, in game, and working. I was at first a bit leery on this change because I really liked the balance of the symmetric HUD prior, but in terms of information and real-estate this new layout is much more efficient and useful. Brief explanation below. 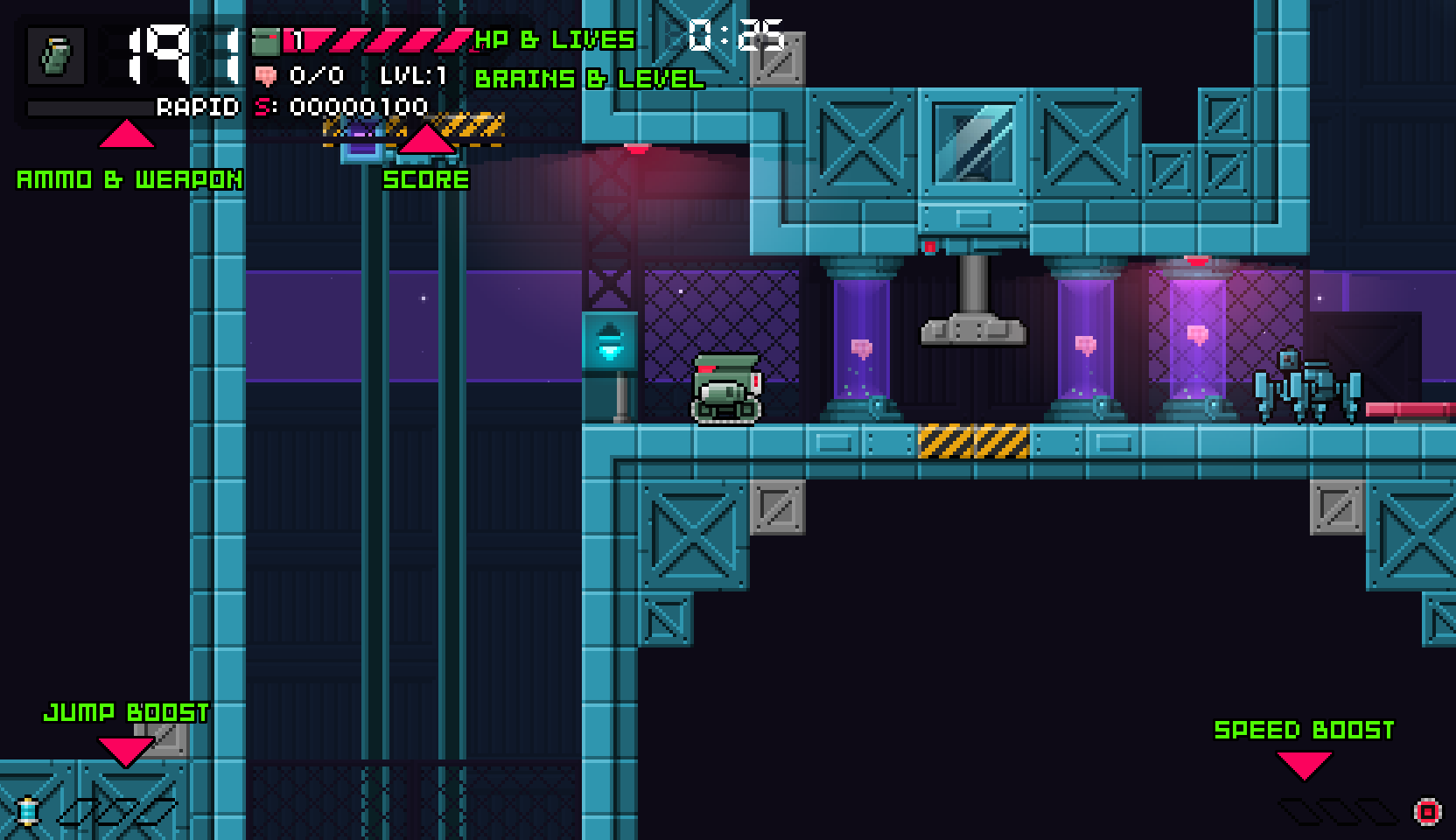 Frick'n “Lasers” :
I wanted a couple more obstacles so I added some frick'n lasers to the mix. They are old school in function, they all fire in unison and are timed. I like them. :) 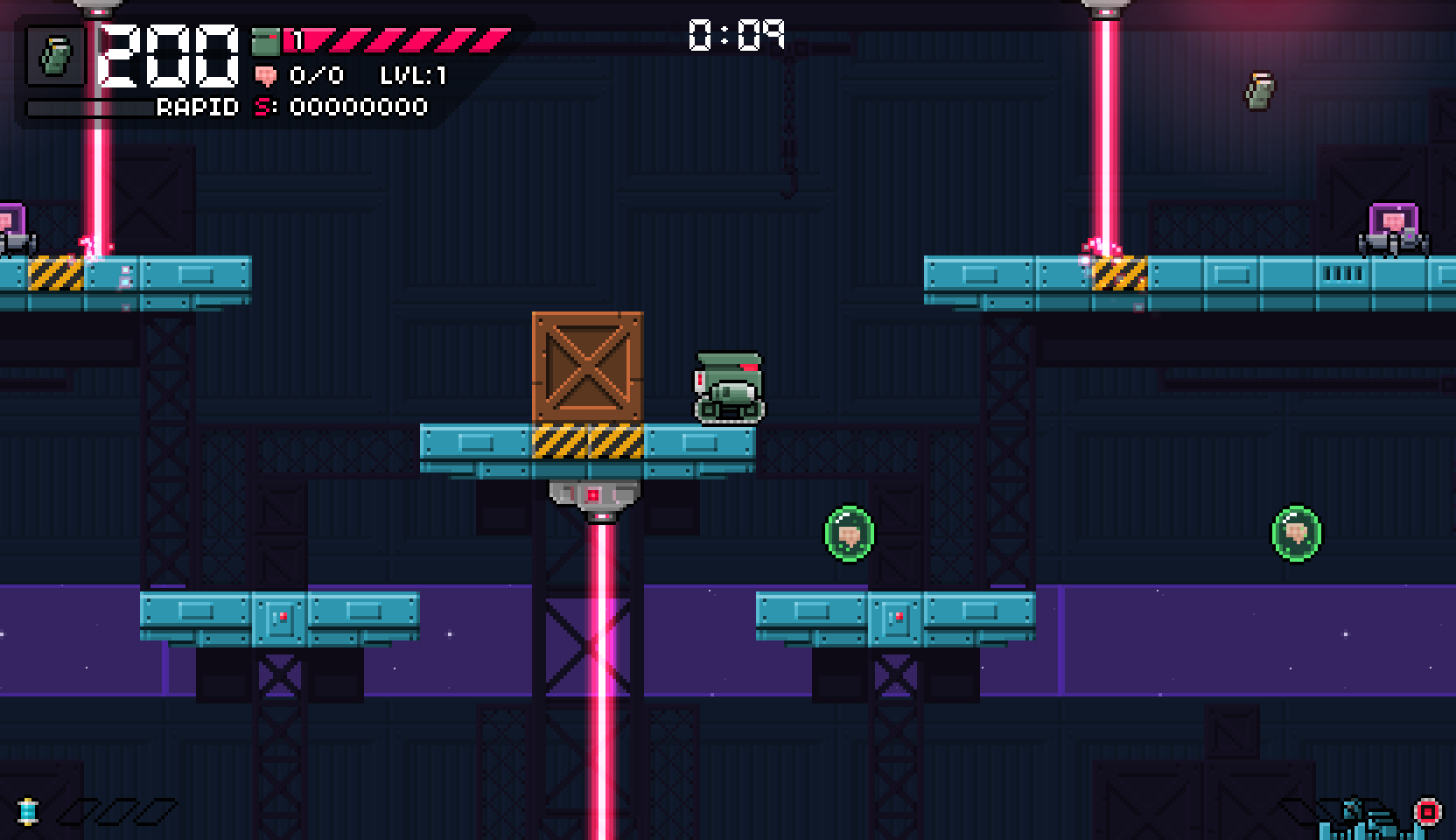 Bigger Levels & Insta-deaths :
It's still only one level at the moment, but it's massive. 4X bigger than the previous. I got rid of the bottomless pits, but kept spikes and crushers. I'm not going to get into the “shooters shouldn't have this or that” Show me a rule book and perhaps I may follow it. 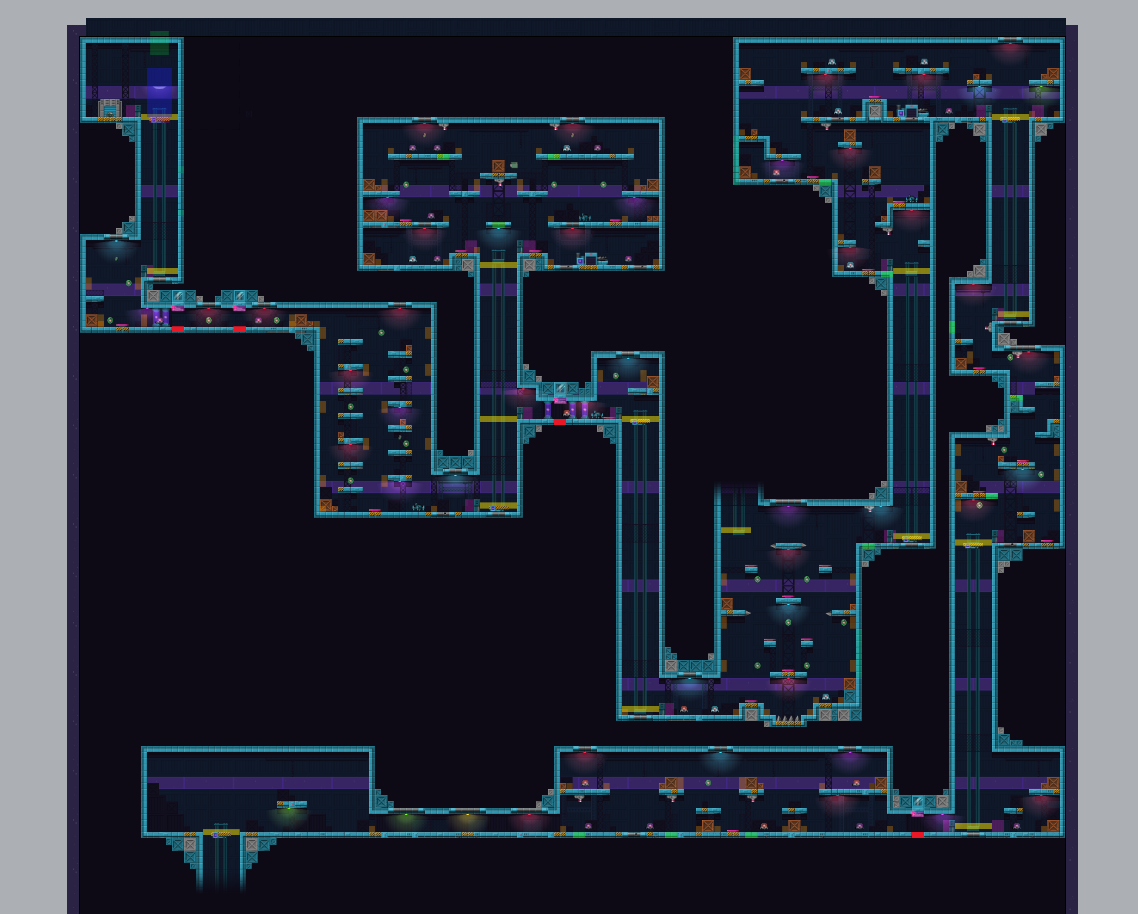 Desktop Exports (YAY!) :
I have exported versions of the new demo for Windows, Mac, and Linux. I am unable to Linux builds, but I am using NW.js 12 and from what I have read Ubuntu and other distros should be supported. If you find any errors or run into issues on install, just let me know so I can attempt to resolve it.

Other than that, I polished and refined some artwork. Adding directional signaling on the elevators, when they are returning to let the player know what is going on. I also added a tiny bit of parallax to the background texture to give it a bit more depth. There are a few more things but minor in detail, perhaps you'll spot or hear them.

I have a laundry list of other things to work on, but as people are playing I want to keep the build current in hopes to get ideas and inspiration to keep chugging along.

I READ THEM!! Free lives are the best :D

There are more 'secret' areas ;)

First elevator shaft - half way through - on your right - shoot like hell ;)

Came, played and i like it! Well i like the visual style, love shooting but i think you want to hear what we dont like about the game to further improve player experience. I might be completely wrong with following but here are two major issues i have with the game:
I dont like how you treat player when hes hit. Stun is not funny as it stops me from having fun for a while. Make player blink for a while and make him invulnerable for second so player can continue having fun.
Second thing i disliked is inertia of the robot, i got used to it after couple of minutes, but for me, movement does not feel right as it feels like walking on the ice. Try reducing it to half, just to keep that soft movement feel and stop it beign annoying.
Third thing is matter of everyones taste, but i think whole game looks cute, visual style is great, again, everything is cute, but your hero looks mean and evil. Its all in the eyes, i like your robot in general, but i think your game deserves somene more cute(have a look at famous R2D2 or WAL-E, ppl love dummies like that). As i said, the base of the robot is great, but those evil eyes!!!;-)

Other than that i enjoyed the demo and im looking forward to see more of the game!

I like the aspect that makes you get stunned when you're hit. If it ruins your playing, then its motivation not to get hit :D

That is my thinking on the stunning. I feel it can be at times a minor inconvenience or complete chaos. The unpredictability of what could happen, I feel lets you know to stay away from them :)

Thanks for testing it out!!

Improved player experience is what I'm after :) so it's appreciated for sure. The stunning is by design - it's supposed to alert the player that you should stay away from those guys. Cause and effect. IF you don't you will certainly die. Timing and patience is key when the flying patrols are in sight. I am however reducing the amount of time you are stunned for. Which after a but of testing seem more fluid.

Player movement is always under refinement, so any feedback on this is great. I guess I'm not feeling the "walking on ice" effect in relation to movement. Are you saying the player "slides" or feels as though the player has no traction?