Exterminatus Beta 8.21 massively improves on the Lictor cloaking effect used in the version we released in January, adds a whole new map and inclues a great deal of new sound effects.

Exterminatus Beta 8.21 massively improves on the Lictor cloaking effect used in the version we released in January, adds a whole new map and inclues a great deal of new sound effects. 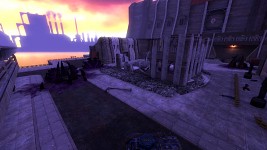 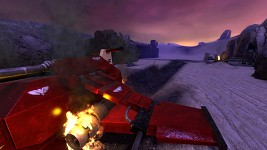 Since the last Beta a considerable amount of rebalance has been done to tweak the Tyranid team. Genstealers have been elevated toa reward class, reducing the Tyranids easrly game advantage in speed and access to shortcuts. The new Lictor cloak required a substantial amount of tweaking since the Lictor is now rendered completely invible to his prey. Zoanthrope's healing ability is now part of the default wargear and is triggered using the Reload key, but has been nerfed to reduce the health it grants to most classes. Biovores can now bombard targest without fear of hurting their teammates (and being penalised points for friendly fire) while actually doing more dmage to their intended targets, however the rate of fire has been reduced to keep tem from being overwhelming.

On the marines side of the mod, Tarantulas now handle damage much more like regular teammates resisting friendly fire and flames in general. The Specialist's Maltagun and Plasmagun have both been upgaded to bring tem onto par with the Flamer. The veteran classes powersword now cuts through Carnifex armor, making it much easier to take out the big bugs from up close. The marine also have a batch of new sound effects and battle cries, thanks to DontAsk and Stormwolf597. 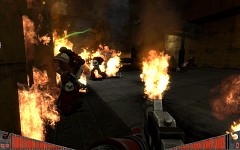 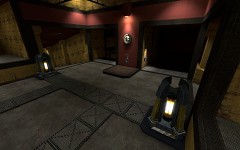 The new map in version 8.21 is called ex_forge, and is set on an imperial forge-world, an industrialised planet wher a great deal of the imperium's tools, machines and weapons are constructed. ex_forge features 5 capturable objectives, each with multiple aceess routes and an extensive set of air ducts allowing the regular routes to be bypassed. DontAsk has provided whole new sets of ambient machine noises and adeptus mechanicus decals for this map.

Since Bloodravens replaced the Ultramarines in Beta 8.10 i've been working on the chapter skin packs to make them work with the latest version of EX. You can find skin packs for most of the major chapters on the 40ksource.com downloads page. I'm hoping to extend these packs in future to include battle cries specific to their chapters for which we need voice actors to record the lines.

As usual there is a large number of niggly bugs and minor asthetic improvements throughut the mod that just make 8.21 that much more polished than the version we released in January 2015. A full chnage log can be found on the EX ModDB features page.

If you're wondering what to expect to see from EX next, StormWolf597 and Wikkyd have been working on a Dreadnaught player model for the marine team...