It's been a long time since the last update of 3x64, but I believe today's great news will be a good compensation - to cut it short, after much testing and tweaking, 3x64 finally arrives to long-promised Android phones!

I thought it would be nice to talk about why the development took so long. We originally planned the Android release for last year, but it turned out that developing for Android is a little more difficult with too many new challenges. Originally I tried to build the Android version together with the PC version, but soon I found out that it would be better to make it completely separately from the beginning. It was a better decision due to optimization (as the original game, with its many effects and carelessly written code, was quite heavy for mobile GPUs) and also due to controls and UI, which had to be completely different from the PC version.

The UI and controls were the biggest challenges and it took a very long time to find the best possible solution. In the UI, we wanted to make powerups more accessible for fingers which I think we did, and fortunately we have preserved the in-game leaderboard with some new cool animations :). Supporting all aspect ratios with so many UI elements in 3x64 was a big challenge, but I hope it looks good on most devices :) 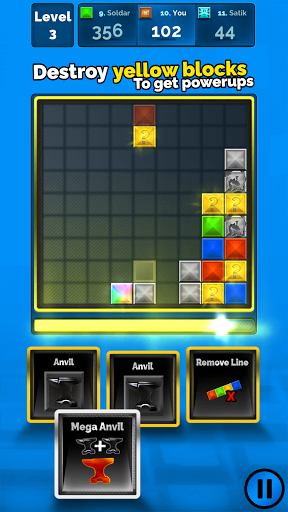 Searching the right controls was even harder as I wanted to find one common playing style for all players, but testers were divided into two groups - most of them liked the touch screen controls, but some of them played much better with virtual side buttons. In the end, I decided to support both variants.

I'm very grateful to all testers who gave us great feedback, especially during the last month before the release. The game can still have some problems or bugs, but it shouldn't be anything serious.

Differences in the Android version

The Android version has many differences compared to the "classic" PC version. You can notice the biggest change in the controls - it's now possible to move blocks down with fast landing which makes the pace of the game much faster. Also as you unlock new ranks, you can upgrade one of the powerups for a single game and even start with ready to use (or craft) powerups.

For using all these features you need coins - but don't worry, they can be obtained only by playing or completing the quests, there is no way to exchange real money for them. The coins can be also used to get special powers, which are designed to make the game a little easier but at the same time with minimal impact to the leaderboards - all special powers have one use per round. 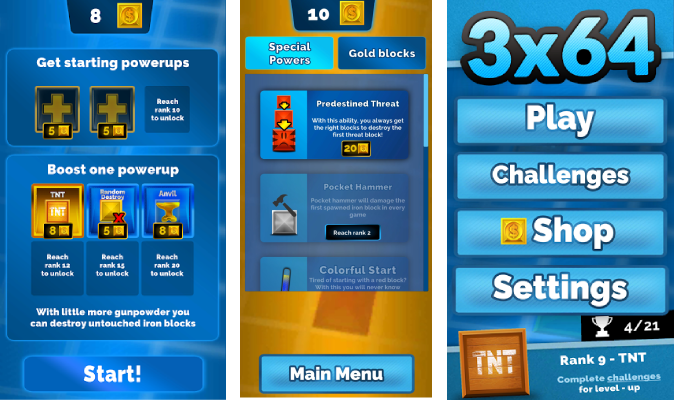 The mobile version has almost all features from the PC version, including colorblind modes, quests, and multiple game modes. The only PC-exclusive features are replays and cloud profiles with statistics (which are Steam-only). The mobile version is completely free, and is supported by ads in the menus.

With the Android release we have met our biggest goal, but there are still some plans for both platforms. I would like to expand the game for iOS soon, and regarding the PC version, I promised myself to finish update 1.4 with some new interesting features and also completely new game mode, but now we begin to focus on a completely new project so I can't promise any dates.

I hope you will enjoy the game, you can find it on Google Play! We will be absolutely happy for any reviews there, or feedback in the discussion here!